Super-groups have the advantage of emerging from the realm of dreams fully-formed and prepared for execution, the weight of its member’s collective reputations fueling them to certain footing. With names such as George “Corpsegrinder” Fisher and Victor Smolski as just two parts of a star-studded lineup, Voodoo Gods has already eaten a fair share of the spotlight in notoriety alone. Though six years have passed since their debut album “Anticipation for Blood Leveled in Darkness,” there has been eager anticipation leading up to the release of their sophomore album “The Divinity of Blood.” Striving for the familiar textures of old school death metal, brutality dominates a sound that occasionally levels with tastes of NWOBHM from Smolski’s talented hands, with two vocalists and two guitarists always seeking to offset one another.

A successful super-group should exceed the sum of its parts, but “The Divinity of Blood” sits at approximately Voodoo Gods’ face value, pursuing a unique identity that can never quite peel itself away from the indulgences of its members. “Anticipation for Blood Leveled in Darkness” had featured Adam ‘Nergal’ Darski of Behemoth as one part of the vocal tag-team, but Voodoo Gods has replaced one icon for another in welcoming Corpsegrinder into the fold. Alongside longtime member Seth van de Loo, Corpsegrinder helps drive home the unwavering brutality that dominates the vocal-focused segments of “The Divinity of Blood.” This sheer vocal power allows for the aural assaults such as the concluding moments of “Isa,” stripped down to minimal percussion in such a way that each vocal punch lands with the full potential behind its strike.

“Isa” also allows for the first taste of the highly pronounced bass that rears its head throughout the course of “The Divinity of Blood,” the deep bass lines often given the role of building transitions between passages with its seemingly effortless vibrations. Voodoo Gods features Jean Baudin on bass, a role that is continually uplifted even through the highly gratuitous guitars which fill out “Forever!” No matter the attention that Corpsegrinder draws from the ever-present Cannibal Corpse fans, and no matter the fact Voodoo Gods is drawn together by drummer and mastermind Alex Voodoo, there is no question that Smolski steals the show. “The Divinity of Blood” overflows with solo after solo, drawing closer to the roots of heavy metal and bright flourishes of NWOBHM than the death-structured songs would have originally suggested. Smolski pushes the speed on tracks such as “Rise of the Antichrist” and “The Absolute Necessity to Kill,” though not without generous help from the rhythms of Voodoo Gods’ second guitarist Jacek Hiro. Even when Smolski focuses on turning heads with his solos, Hiro is given a generous amount of airtime to fill out the densely-packed pages of “The Divinity of Blood” in a fittingly complementary fashion. 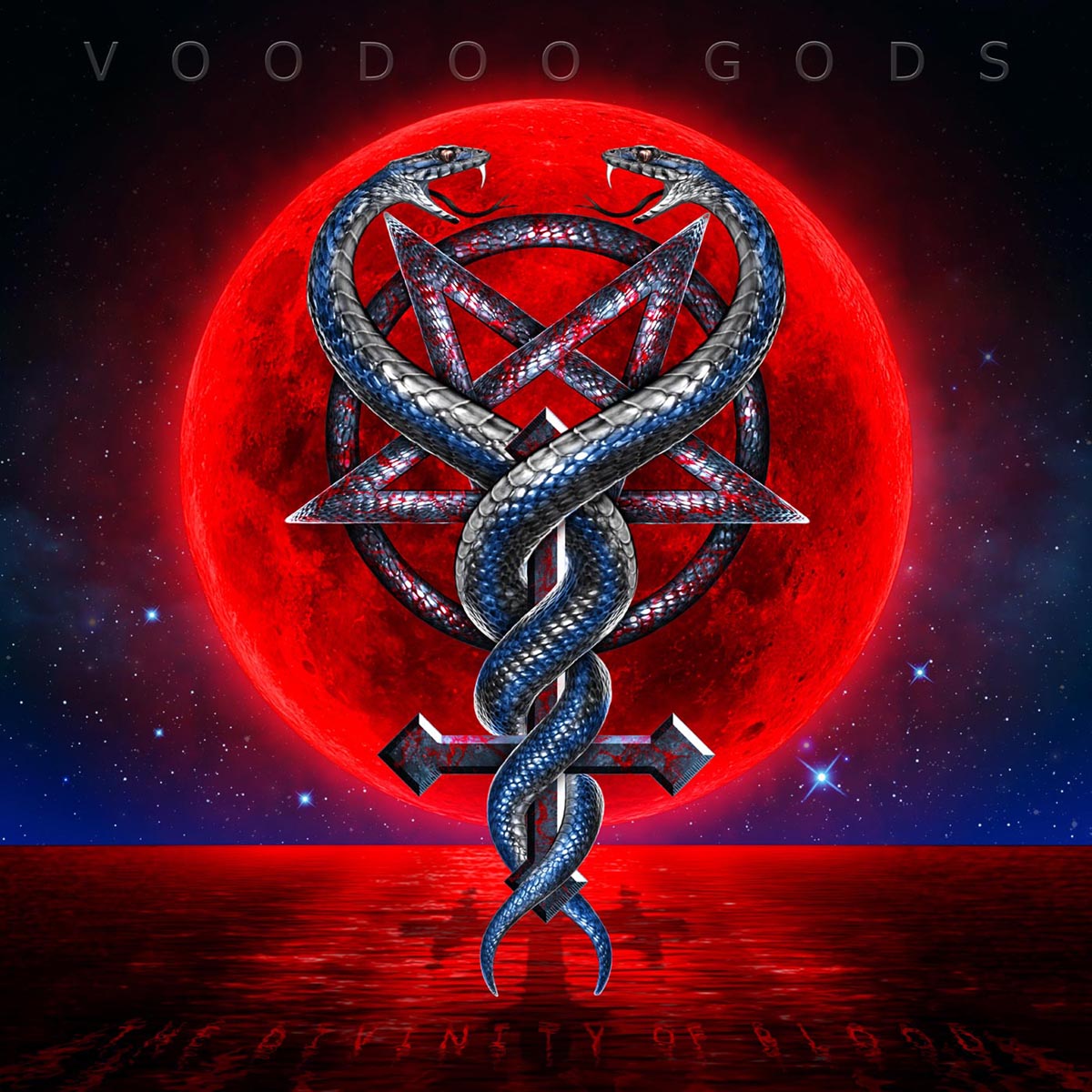 “The Divinity of Blood” Album Artwork

At times Voodoo Gods strays towards the juvenile, particularly with the short and burning “Serenade of Hate.” Overflowing with vitriol directed at some unknown subject, barbed language and unrelenting screams dominate with a message of hatred that offers no room for nuance, just pure aggression that seems to spring from youthful pain. Yet these more direct moments are balanced out by a more mature experimentalism featured on title track “The Divinity of Blood,” including Voodoo’s pointed percussion in the song’s haunting interlude. A dynamic play between the moments of speed more reminiscent of thrash with slow, grinding passages give “The Divinity of Blood” enough variety to engage listeners throughout, and show that all musicians featured are more than one-trick ponies without straying too far from their comfort zone.

The band has repeatedly emphasized that they are not a side project, but they are a super-group nonetheless. And with all the things that make them super, each of these Voodoo Gods have brought with them a fair share of ego, however well-deserved that ego may be. Fortunately for “The Divinity of Blood,” these larger-than-life personalities play together with enough cohesion to make their sophomore album a fun, if not memorable listening experience. Though flirting with other stylistic influences, the thrash-inspired take on death metal plays to the strengths of the members that came together for the sake of creation, and carves out an identity unique enough to stand on its own.

“The Divinity of Blood” Track-listing:

An energetic and exciting album from some recognizable names in metal, “The Divinity of Blood” has the sharp teeth to please death metal fans while demonstrating an expansive scope of musicianship and song structure that transcends its genre.