There are so many death metal groups out there that use the craft of the aural strike to their lead. It is not really something new to just charge flat out with little to no breaks at all along the way in order to fetch a piece of brutality or continuously spiraling malevolence. However, it can sometimes come across as tedious for the listener when all you have is this never-ending block of sound blasting without stop. Poetic melancholy can be derived from the dissonant depths of black metal, or pulled from the sinew of atmospheric death metal as its static creates a shroud.

New Zealand’s Ulcerate have understood this very well on their new, sixth studio album entitled “Stare into Death and Be Still,” out on Debemur Morti Productions. The darkest moments have become even more desolate, and those melodies on which they have built their sound even more melancholic. The record is an atmospheric descent into a narrow well of solitude, a journey of the self as death proceeds closer, a ship lost in a sea of sonorous bass that expands to an infinite horizon. There are moments throughout the 67-minute release when singer and bassist Paul Kelland, guitarist Michael Hoggard, and drummer Jamie Saint Merat come together as one just to annihilate you. This is successfully done with the album mix by stuffing all of the instruments into a dense audible space with little room to breathe. During these parts, which are present in many a song here, the unified tone of all instruments gives it the feeling as there is a constant energy pressing against you. It may sound exhausting, but Ulcerate combine that dissonance with technical proficiency making the two elements balance each other out.

In the same tracks where these parts are adjacent, there will be times where the group lets the listener take a break during this whole mayhem. An example of this is “There is No Horizon.” One of the best pieces is that while you are given cover in the middle of the musical whirlpool, you know for sure that it is still outside waiting for you, and that Ulcerate could fill your safe shelter and submerge you in their continuum of ferocity. It is inspiring in a way, and gives “Stare into Death and Be Still” a feeling of suspense and dynamics.

A sense of peace is at the heart of “Stare Into Death and Be Still,” despite Paul Kelland’s tormented howls and the lamenting web of guitar that surrounds him at the album’s every turn. “Visceral Ends” has him muted as Jamie Saint Merat rains down explosive energy on drums, but “Exhale the Ash” sees him pique with greater clarity amongst the percussive assault. The give-and-take between the vocals and the energy of the instruments is a theme that spans throughout the album, but the trio seems to be on a united march of solemnity towards the eventual end that awaits us all. The atmospherics and blackened tones bring Ulcerate to depart from the purest labels of death metal, particularly with the moments of funerary progression that seem to belong in the hands of a melodic doom band. Seeing moments of melodic pause that would make a fitting cousin to the latest offerings from Swallow the Sun, it seems as though Ulcerate has expanded their creative arsenal and have grown bolder in their search for meaning among the shadows. 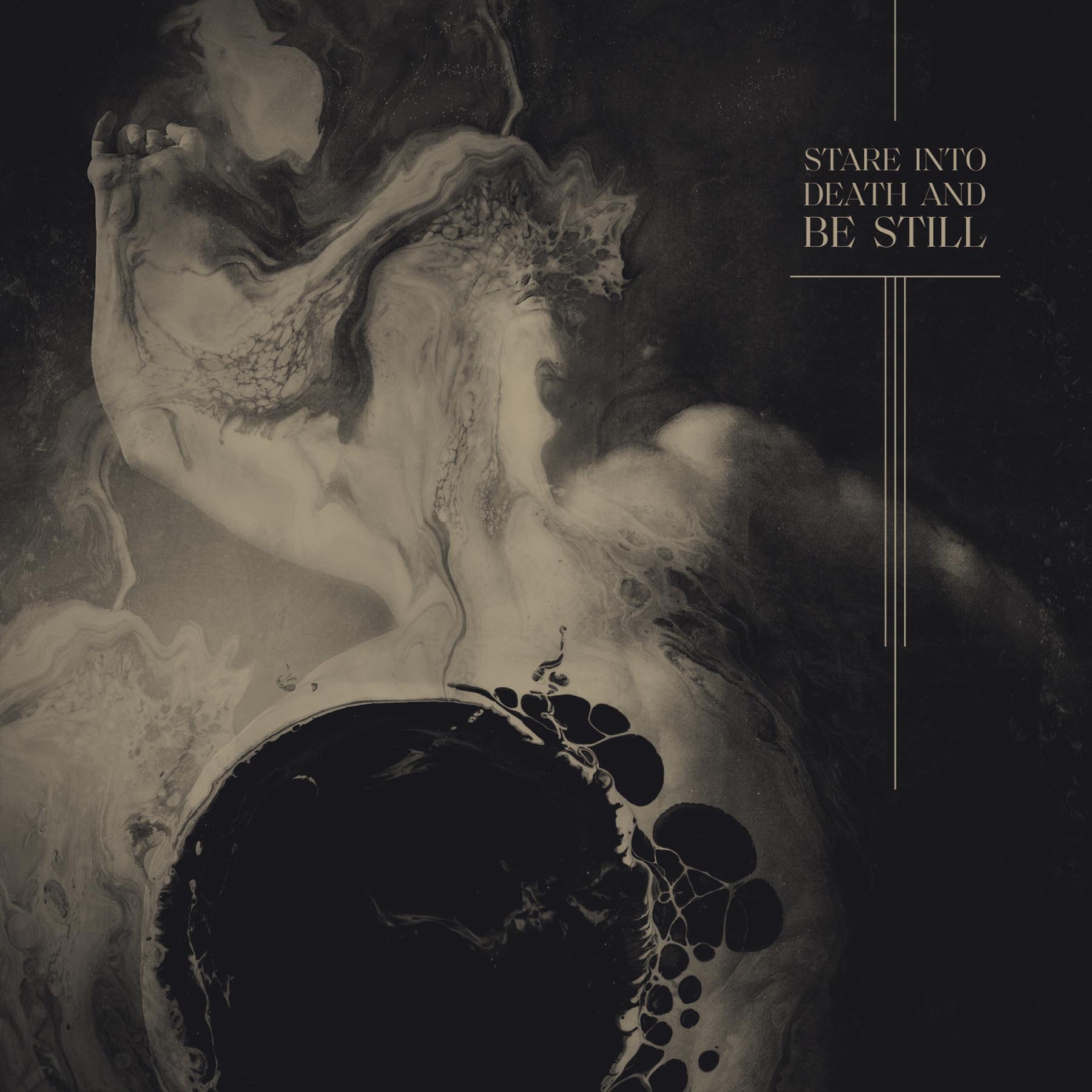 “Stare Into Death and Be Still” Album Artwork

What these sedating parts also do is letting you admire the instrumental work pf the trio. Jamie Saint Merat’s drums are performed with a great feeling of forethought, allowing you to acknowledge his prowess not only when it comes to putting these pieces together, but also for how it’s conveyed through many contrasting layers. Above everything of this aural strike, cacophony and its surroundings are skilled musicians and players on the album. They propel the music, but also connect those layers into entities that do not come across as offensively showy. In the title track, the dissonance is spiraling back and front, with Hoggard’s guitars and Kelland’s bass emphasizing that jarring atmosphere. This is a prime example of a song that uses its atmospherics to both capture and free the listener. “Stare into Death and Be Still” is filled to the brim with moments like this.

Part of the album’s appeal comes in the extension of its themes in perfect unity throughout the lyrics, the music itself, and the titles with which the tracks are adorned. The dark dereliction of despair entwines itself through each moment of the album, including titles such as “The Lifeless Advance” and “There is No Horizon.” This intention comes from the core concept of the album, being that death and tragedy are not necessarily relegated to the violent or the unexpected, but are phenomena that can appear even as onlookers are trapped in horrified passivity. At moments such as the instrumental interludes of “There Is No Horizon,” listeners may find themselves trapped at the prospect of the song’s never-ending advances, a gradual deliberation of solitude and loss wrapped in seemingly endless aural violence.

For all of its sullen, anger-tinted appeals to the realm of atmospheric black metal, Ulcerate find themselves lingering too long in the voids between genres. The album often comes off as a collaboration that found no one direction, and was feasting with earnest on more inspirations than should have been indulged in. The weight of the death metal title that they had claimed for so long found itself buried among the dissonant atmospherics, chilling winds of black metal, and a mix which left all participants sounding muted. There is still clear creative energy between the members, giving the winding tracks a sense of cohesion even as they spanned enduring moments of soulful echoing through emotional melodies. Kelland’s voice is strong and evocative, but wandered a touch too aimlessly for the punch he gave it. “Stare Into Death and Be Still” is an introspection that lent itself to overthinking a touch too far, but still provides a fair deal of brutality to round out the rougher edges.

Those that seek to lose themselves in the foggy forests of mournful poetry, “Stare Into Death and Be Still” is a one-way ticket to languish in the chilling realities of death and mortality. Exploring the concept of “death reverence,” Ulcerate are once again showing that down in their core lies the craftsmanship that is impenetrable and uncompromising. Clearly masters of their craft, and dexterous enough to slip between styles like shadows in the night, Ulcerate’s upcoming album is a worthwhile exploration of extreme metal with a more atmospheric approach.

“Stare Into Death and Be Still” Track-listing:

Striking a commanding aura of peace amongst despair, Ulcerate mellow the brutality of blackened death metal with resonant atmospheric intonation. Somber without losing its aggression, “Stare Into Death and Be Still” is a dark wandering through the pressing weight of mortality.