There are few places on Earth that can so aptly channel the essence of black metal as the cold clutches of Siberia, with long winters cast in darkness and shadows as chilling inspiration to craft pure sonic discordance. Theosophy has drawn from the frigid breath of the north for more than fifteen years now, harnessing the magnetic draw of distortion and blast beats to speak in the universal language of music across four full-length albums. Following on the heels of two concept albums after a four year gap, their fifth full-length album brings a new level of arctic brutality which has the power to chill listeners to the bone. “Towers of Dark Pantheon” captures the desolation of abandonment alongside the more inviting tales of Altai history and mythology in a strong attempt at conceptual diversification that spans eight seamlessly integrated tracks.

Theosophy is not in the business of reinvention, but refinement. The opening distortion of “Curse of Ak-Kadyn” leads into a riff that seems derived from the spirits of Mayhem’s most fabled anthems, the more classic black metal inspirations serving as a steadfast template throughout the duration of “Towers of Dark Pantheon.” But this appeal to tradition does not define Theosophy in their entirety, as the album takes on a more dynamic nature with the inclusion of carefully placed keyboards to carry a wintry melody with the sharp definition not afforded to the guitar. One such track is “Old Stone in the Woods,” which offers brief moments of key-driven melody alongside a meandering guitar, giving a second dimension to a suspenseful bridge. It is important to note that the keys are not treated as some gimmick or afterthought to the more traditional instruments, but are instead integrated seamlessly and intentionally into each moment they present themselves. The melodies build in their own directions, not mere reiterations of Egiborg’s riffing, ensuring their place as a noteworthy standalone and essential component of the passages in which they are present.

What allows the keyboard to succeed is the definitive strength of “Towers of Dark Pantheon,” which is a mix that strives to perfect the black metal ethos that less is often more. Atmospheric soundscapes and blustering wind of near-silence amidst static are just one part of the appeal: Theosophy keeps the signature distortion of black metal while honing in on the crisp percussion offered by drummer Skinner, and interspersing unadulterated keys which give light to passages of pure aggression. When the guitar descends into haunting echoes, the bass and drums fluidly coincide with even greater clarity. The attention paid to highlighting technical execution without abandoning the raw might and rough edges of their genre play out across “Full Moon Triumph,” tempting listeners with a well-timed percussive hook before easing listeners into a more circular song structure that gives the riffs time to grow on themselves. 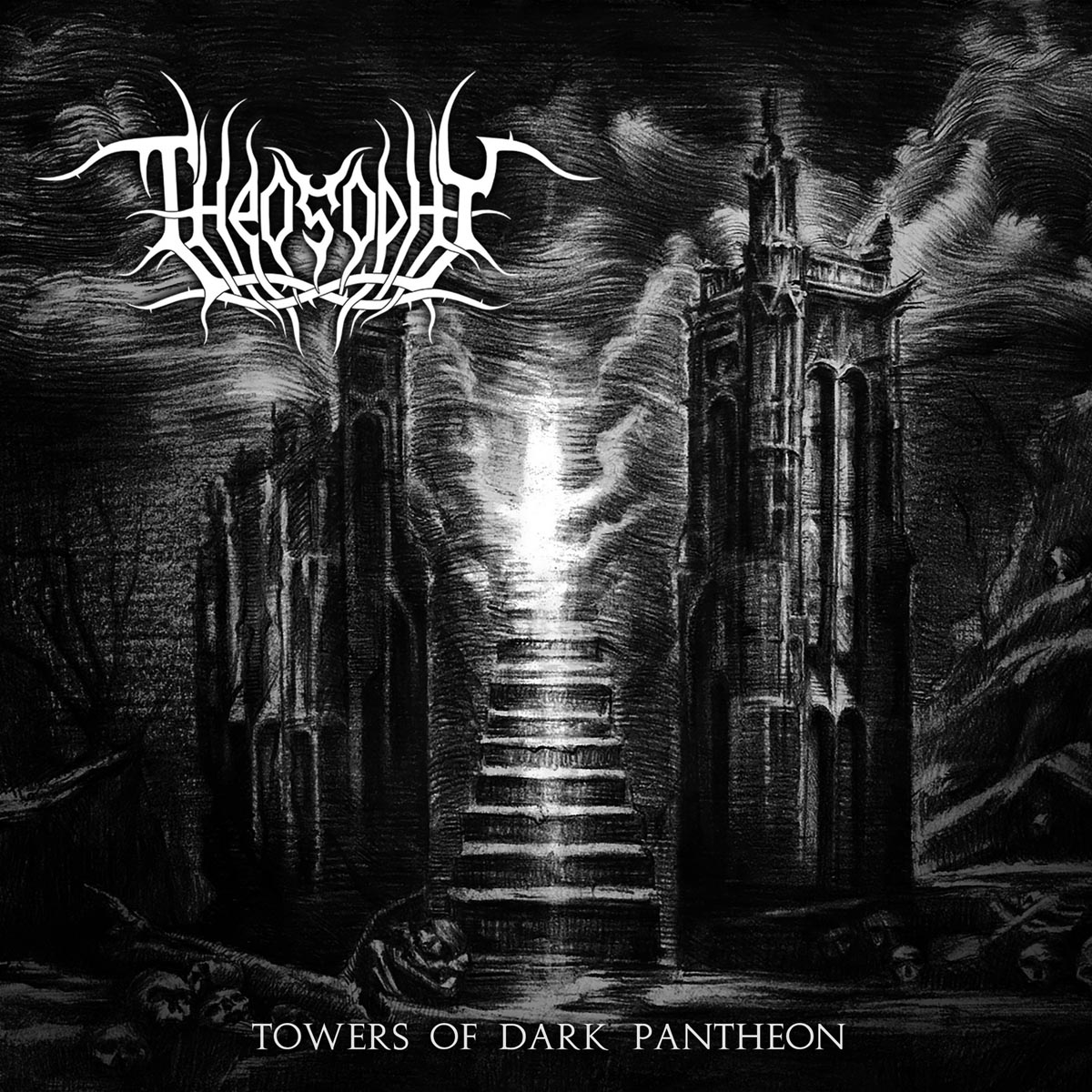 The balancing act amongst musicians does not just play out within songs, but across the album as a whole. “Where Thunder Reigns” brings a relentless storm of blast beats that match the throaty screams of Theosophy’s front-man Phantom in flawless form, the two elements joining in an electrifying display of speed and brutality. Not once letting up once throughout the track’s impressive duration, Theosophy proves the sheer might of their musical prowess without ever losing sight of their musical identity. And for all of its unrelenting brutality, “Where Thunder Reigns” contrasts with closing track “From Eternity to Past,” a song including verses of spoken word alongside a delicate dance of keys that fall like snow into the album’s conclusion. The thread that ties the adventurous tracks of “Towers of Dark Pantheon” together is Phantom’s unwavering roar, solid execution giving Theosophy a rare sense of authenticity given the modernity of its production.

For fans of old-school black metal, Theosophy provides a refreshing and more refined take on some of the genre’s most steadfast tenets. Stuffed full of dissonance and near caustic atmospheric delivery, “Towers of Dark Pantheon” is an arctic exploration of mythology, world religions, and even the cosmos. Competence in pacing and a clear vision for final production allow Theosophy to strike a careful balance between tradition and modern musicianship without forgoing authenticity or identity. A natural story that pulls listeners effortlessly from track to track keeps “Towers of Dark Pantheon” engaging time and time again, with a dynamic growth and exchange between instrumental showcases providing new dimensions to appreciate with each repeated listen. This is a strong album from a group of musicians absolutely committed to their art, and their passion can be readily shared with all fans of the dark and brutal.

In the spirit of black metal’s most legendary acts, Theosophy brings arctic brutality from the cold clutches of Siberia with unwavering creative unity and well-balanced production. With complete commitment to the vision of their genre, “Towers of Dark Pantheon” allows the band to pursue creative growth while offering up a bombastic demonstration of speed, aggression, and musicianship.