Anyone reading this review has likely been following one or any combination of the members of The Aristocrats for a number of years, and likely through several albums and bands. The Aristocrats is comprised of Guthrie Govan on guitar, Bryan Beller on bass, and Marco Minnemann on drums. Any one of these three musicians could feature in any website or magazine’s subjective Top 10 list on their respective instrument, and just shy of a decade ago, the thought of this evil and terrifying three-headed hydra of musical carnage could set the imagination ablaze. And yet, here we are, on the band’s fourth full album release (as well as a handful of live releases,) and after a hiatus over the past couple of years since their prior album, Tres Caballeros, the Caballeros are back with You Know What? and they haven’t missed a beat in the time taken off from this band.

For starters, for those unfamiliar with this band, they have a really cool way of sharing songwriting duties, where each album is a perfectly divisible-by-three nine songs, and each band member writes three of the nine. And you might think that each musician’s songs clearly sound like it would be their song, like a Bryan Beller song might have a bass solo, etc., but not so! They will intentionally write parts for each other into their own songs, so that Govan might decide he wants to hand off a melody to Beller, rather than one player giving it to themselves. The band considers the way they work and play to be “a rowdy democracy of musicianship,” and they’re not wrong.

That leads us to the next item worth tackling in The Aristocrats: as Frank Zappa famously and rhetorically asked, “does humor belong in music?” And while that answer has become more self-evident over the years (as it wasn’t quite so palatable a thing to the masses in Zappa‘s time,) The Aristocrats drive home the answer with a resounding “Yes!” The band’s namesake is taken directly from what is likely – depending on the person telling it – the dirtiest and longest joke on the planet, so much so that there is a documentary on it. (You can go watch it and come back. We’ll wait. But do so at your risk.) And while the music is instrumental (something of which Zappa would also approve) the band makes the jokes where they can – sometimes musically, but almost always in song titles. Past favorites are “Bad Asteroid,” “Sweaty Knockers,” “I Want A Parrot,” and “The Kentucky Meat Shower,” while on You Know What? we are treated to such gems as “D-Grade Fuck Movie Jam,” “When We All Come Together,” and “Spiritus Cactus.” And yet, the chuckles never once overshadow or outshine the music. If tight jams played with absolute precision and joy be further enhanced by a LOLZ-inducing song title, then we are all about it here at Sonic Perspectives. 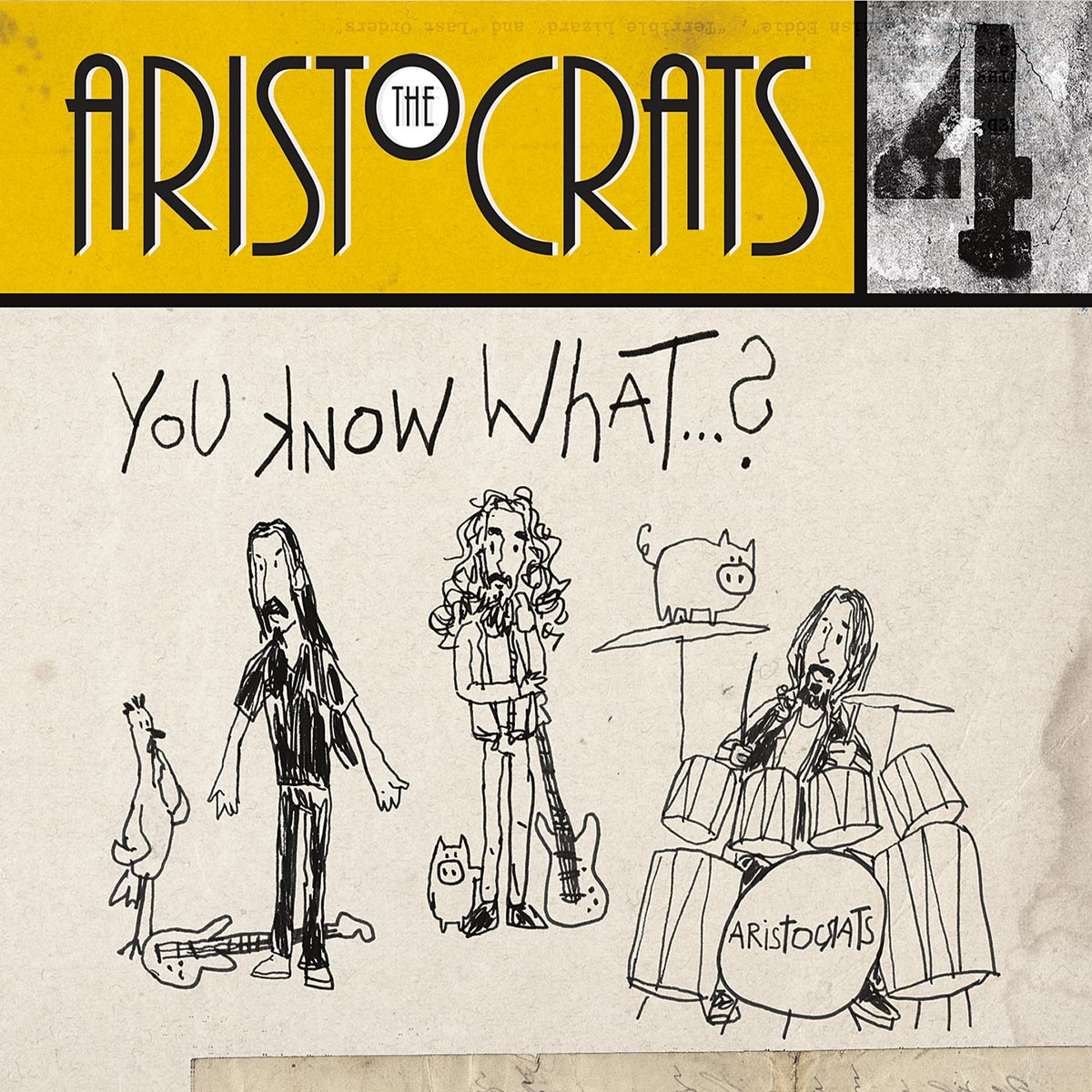 “You Know What?” Album Artwork

And that, in turn, leads us to the main item worth tackling in You Know What? which is how is the album when compared to past works? Well, the band themselves say it might be the best thing they’ve done together, and you know what? They’re not wrong. The album is lightning in a bottle recorded for posterity. It is sheer excellence. There is just absolutely so much to love. Every time you think the album has run out of ideas or places to go, it wows you again. Every time you finish a song and think, “Okay, that’s gotta be my favorite from here” on your first listen, the next one makes you think about changing your mind, and by two songs later, you forget why you liked the original so much compared to what you’re hearing now. Many who follow the scene of music that is sort of all around the G3 tours with Joe Satriani, Steve Vai, and so many others who have joined them over the years (Johnson, Petrucci, Malmsteen, etc.) will find a few common themes: it all focuses on the guitarist. And while we’re unabashedly fans of guitar-driven instrumental rock here at Sonic Perspectives, there is something so refreshing about seeing a band where the guitarist could easily step out front and be the main attraction of the act take a step back and allow it to be the collaborative effort that it should be. Guthrie Govan is one of the best guitarists in the world (and while many in the top tier of their instruments argue there is no “best,” let’s at least acknowledge that everyone mentioned so far is extremely capable with their instrument and songwriting) but The Aristocrats isn’t about him. Or Bryan. Or Marco. It’s about all of them together. They form a mind-melting isosceles triangle of rock awesomeness. And, like their French contemporaries Mörglbl, they understand sharing the spotlight, letting the musician’s moment serve the song, as all things should, more often than not.

In that spirit, You Know What? gives us a collection of fantastic songs lasting just about an hour that form a fantastically creative album that entertains, amuses, and inspires. The variety of songs is astonishing, and yet as the listener ventures through the entire album, the entire work starts to take shape. From the opening track, the aforementioned “D-Grade Fuck Movie Jam,” the listener could think it’s going to be a mostly raucous rock or rock-fusion album with loud guitars and in-your-face soloing and wah playing. And the listener isn’t wrong. But there’s still more to be unearthed. “Spanish Eddie,” starts with a mysterious two-hand tapping riff in 6/8 that quickly takes us into Spaghetti-western territory, which has admittedly been explored in rock before, but where other artists have taken us, The Aristocrats veer off of the path of main quests and explore all of the side quests, taking us on a dungeon-crawling adventure in hopes of discovering what awesome loot awaits us at the bottom of the cave. After “Spanish Eddie” takes us on a wild adventure, and nearly crushes us by the end, we come around the mountain to “When We All Come Together,” which begins as a chicken-pickin’, snare-rolling, hand-clappin’ barn-burner of a thing, and then takes us on yet another twist into moments that definitely sound right at home in the Vai catalogue, perhaps even venturing into the “Fire Garden” for just a bit, before a Beller bass solo brings us back into full-on gallop mode. A song that could be hackneyed and boring in the wrong hands, becomes an off-road adventure into the borderlands.

From there on out, the potpourri continues: “All Said and Done” feels like a casual walk on a sunny day with a slight breeze; “Terrible Lizard” lives up to its name and is the king of the monsters of this album, and is just a massive, crushing thing that is as engrossing as it is entertaining, sure to be a live favorite; “Spiritus Cactus,” probably this reviewer’s favorite if forced to choose one, is a strange and unclassifiable thing, complete with orchestra hit stabs and a whole lot of mysterious gentle guitar chord picking accentuated by castanet flourishes, laying a bed for a melody one could almost expect from an Oriental metal band like Orphaned Land or Myrath – truly the most progressive and adventurous song on the album. As we are gently released by “Spiritus Cactus” and spirited away by “The Ballad of Bonnie and Clyde,” we are treated to more musical mystery, in a song which begins equal turns noir and Johnny A. tender lounge epic. Tension grows, as we are urged forward by an insistent 6/8 that could easily trick the listener into rocking along at 4/4 as the song takes off. Mentioning Mörglbl earlier, it could be quite something if their The Story of Scott Rötti could meet The Aristocrats “The Ballad of Bonnie and Clyde.”  What a tour that could be! While “…Bonnie…” is likely the epic of You Know What? we still have two songs left, and the album is not done with us by a long shot. “Burial at Sea” begins exactly like one might hope it would, and evokes images of underwater cities, perhaps even with the phrase “Would You Kindly?” being spoken by the denizens thereof, and just as the listener’s mind is choosing the setting and Beller‘s fretless bass almost lulls us completely, we are shaken awake by the band coming in full force until we go quite dark, full hi-hat rock mode, with blistering and inhuman solos from Govan, only to drench us in melody as well. And then the listener ascends to the surface, and shafts of light peer through from above the waves. For an album created as quickly as this one undoubtedly was, the sheer quality level of the songwriting, melody, and composition, is just admirable. Remember the first song, when the listener could imagine this being a jam album? The listener has been proven wrong.

And finally, when one might think the album can’t take us anywhere else, we are treated to the finale, “Last Orders,” which could possibly be the (subjective) best song on the album. As the longest song on the album, clocking in at just about eight-and-a-half minutes, it might rival “The Ballad of Bonnie and…” for the championship title of most epic track, but this one is a bit more “Tender Surrender” or maybe even “The Tenacity of Genes and Dreams,” with some gorgeous lead bass playing from Beller. The song quickly becomes a celebration of how stupefying and amazing The Aristocrats can be. It is the perfect album closer for what we’ve gone through here. It’s a shame the press releases provided to us do not credit songwriting, because there is so much strong bass playing, and harmony between bass and guitar, it’s a shame to write this review without being able to give credit for this masterful all-band opus. The interplay alone is gorgeous. Remember the isosceles triangle comparison from earlier? Nowhere is the strength of the shape of this band more evident than on this final track.

When the album ends, the listener can only say “Well, alright then” with a slightly stupid grin on their face. It’s becoming a cliché for this reviewer lately, but once the album ends, it begs to be played again. (We can just blame that on all of the fantastic music coming out lately.) When looking at the past accomplishments of any of these musicians, or the company they keep (for fans of Steven Wilson‘s The Raven That Refused to Sing era, it’s always nice to see Govan and Minnemann together again, again), one could imagine these artists being able to rest on their laurels, or even perhaps just join the band of one of the “big names” and tour endlessly and collect paychecks. But You Know What? shows that The Aristocrats, as a collective unit, is as hungry as ever and possibly more confident and comfortable than ever.

“You Know What?” Tracklist:

As much as humor belongs in this music, this album really does not rely too heavily on too much good-natured silliness. The melodic, dramatic, or even straight-up shredding-est moments make up a vast majority of the album, and despite the hilariously understated album artwork, the art contained within is deep, meaningful, moving, and extremely musical. The songwriting is that good, this time around. The band's approach to the aristocratic formula gives them high marks for originality, as always, and especially when so much genre-bending is involved while still producing a cohesive work. The album sounds great, as always, and as far as rating musicianship, well, it was hard not to award a flat-out 10 to the trio of Govan, Beller, and Minnemann, but, well... nobody's perfect, are they?