Sons Of Apollo are one of the biggest success stories of the past two years in the progressive rock world. The combination of vocalist Jeff Scott Soto, guitarist Ron ‘Bumblefoot’ Thal, bassist Billy Sheehan, keyboard player Derek Sherinian and drummer Mike Portnoy proved to be irresistible on their debut album Psychotic Symphony, released in 2017. The band chose an open-air Roman amphitheater in Bulgaria to record their first ever live release entitled Live with The Psychotic Symphony, which is coming at the end of August. Now, reviewing a live album can be a very challenging prospect. Assuming most listeners are familiar with the material, they will have already heard the studio recordings of these songs. The challenge is not just saying “yep, the band played x, y & z live”. The goal is to adequately describe the recording, and whether or not the performance captured a feeling, a vibe….as if the listener were in attendance that night. In the case of Sons of Apollo’s first live CD/Blu Ray, the answer is a resounding YES.

There is so much energy, camaraderie and just plain delight happening on that stage, if you were to bottle it and pour it in a smoke machine, you wouldn’t see the band for days. The multiple camera angles (even an aerial drone perspective) create a 360 degree immersive experience for the viewer and truly make you feel a part of the audience. Aside from the fact that this 5-headed monster represents the cream of the crop in musical excellence, these guys are very clearly enjoying making this music together. This live recording is the consummate companion piece/memento from the beginnings of what will hopefully be a long run for this band.

Early in the set Dream Theater‘s rendition of “Just Let Me Breathe” is an absolute highlight, and not simply because it’s a track from Portnoy and Sherinian times in the band. Anyone that’s familiar with Sons of Apollo knows that many of the songs on the Psychotic Symphony release are instant prog-metal classics. But as someone who has seen Dream Theater live 60+ times, this may be the ultimate live version of this song in my book. The sheer enjoyment of the interplay between the band members is truly infectious and the soulful/funky vocals courtesy of Jeff Scott Soto breathes (no pun) new life into this excellent song from one of Dream Theater less loved records. Check out the video below for a true slice of greatness. 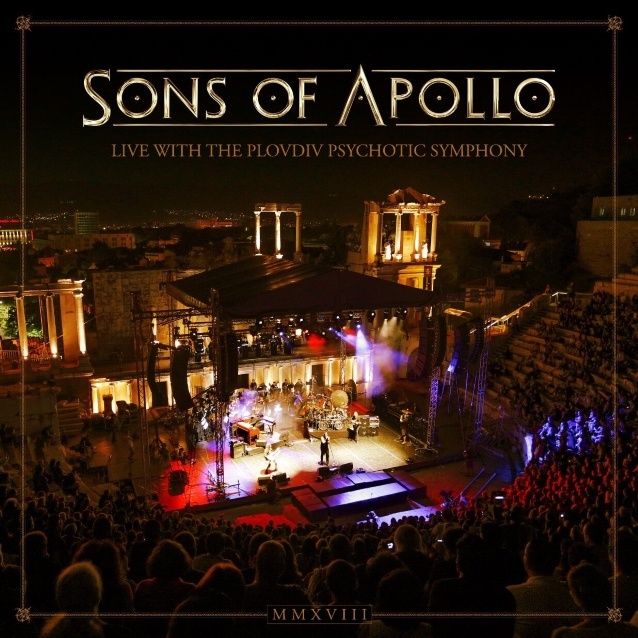 More than a few times Jeff Scott Soto shows why he has been one of the best front-men in rock for more than 3 decades. His command of the audience, his masterful vocals and his Red Bull-infused performance absolutely electrifies the whole of this ancient amphitheater. The way he interacts and engages with the crowd is something rarely seen in prog circles and what makes this band unique. Soto has the ability to involve the crowd in a way that dissolves the line between performer and spectator (wait ‘til you see him during the encore!).

Throughout the concert Derek Sherinian alternately lays down a solid music bed and then sets his keys on fire with lightning fast runs that blur his fingers (even in hi-definition). His blistering solo spotlight even finds him walking around his rig playing his keys backwards! Billy Sheehan is a universally considered a powerhouse bass player like few others of his time, and he never ceases to amaze in a live setting. His thunderous funky and rhythmic playing on his double neck bass would make any lead guitar player envious. And while Mike Portnoy’s legend-status has long since been secured, it truly is a delight to see his creative juices flowing in a full-time prog metal group once again. Whether it’s his percussive prowess during Dream Theater’s “Lines in the Sand”, one of the many covers they perform here or his complex patterns in the Sons of Apollo tunes, we can only hope he’ll release drum-cam footage from this special show.

Nonetheless, the true secret weapon of this super-group is Ron “Bumblefoot” Thal. The guy is limited by…well, nothing! He can play ANYTHING on his guitar and his harmony and lead vocals really add great depth to the bands’ live sound. On his custom double neck guitar one neck is fretted, the other is not. And it’s on the latter that he can create some incredibly unique and other-worldly sounds. His playing on “Diary Of A a Madman” would make the late, great Randy Rhoads proud.

Now, as great as the Sons of Apollo material is on the first half of this set (and it truly is), the second half is where this live show really shines. The band is joined by the Psychotic Symphony Orchestra (brass, tympani, strings, vocals, you name it!) and the beautiful and massive wall of sound they create together is astounding. In addition to an incredible rendition of Sons of Apollo’s “Labyrinth”, Portnoy‘s choices for the covers are as amusing as they are diverse. The standout tracks are Rainbow’s “Gates of Babylon”, Ozzy’s “Diary of a Madman” – which, dare I say, might be the ultimate live version of this song, hands down – and last but not least Floyd‘s “Comfortably Numb.” Portnoy presents the cut from The Wall as arguably his favorite ever guitar solo, and everyone and his momma knows how lyrical and soulful Gilmour’s timeless guitar part is. Bumblefoot‘s playing here is truly magnificent, adding his own flavor at the enduring climax of an illustrious and majestic track.

To be honest, I am not generally a huge fan of live concert recordings. I have many in my collection, but don’t find myself returning to very many for multiple viewings/listenings. But this will undoubtedly be an exception. The track listing is well crafted, the choice of covers is definitely well thought-out, the orchestra, sublime. But the real highlight of this very first Sons of Apollo live recording is the world-class musicianship, the band/audience interaction and most of all the absolute sense of enjoyment everyone is having. It really makes me regret not jumping on a plane to Bulgaria that night. With their sophomore release coming sometime in early 2020, this CD/Blu Ray release is the perfect time capsule of the inaugural run for Sons of Apollo. Filed under MUST BUY.

There’s always a danger when a new supergroup forms that the output will be yet another paint-by-numbers exercise and/or that their live performances will be a yawn-fest of noodle-y notes only enjoyed by musicians. Those fears were completely put to rest as Sons Of Apollo played for audiences around the world in 2018. This live recording cements the notion that these five guys can showcase instrumental prowess, but also play melodic and catchy songs, rock n' roll swagger, enact audience participation and have just plain good, good fun