A name which has long been adorned with titles of Platinum and Gold, Seether is poised to continue soaking in the spotlight with their eighth full-length album “Si Vis Pacem, Para Bellum.” Translating from Latin to “If You Want Peace, Prepare For War,” the album’s turbulent waters are anything but a prelude to peace from one of the most iconic voices of the mid-2000s. After earning US certified Platinum and Gold on their earliest albums between the years 2004 and 2007, Seether continued to craft grunge-tinged rock with the same captivating aura as the unmistakable tones of anguish which primed their initial rise to fame. Perhaps their heaviest offering yet, “Si Vis Pacem, Para Bellum” is thick with aggression and shadow-filled hostility that emerges in a tangle of chugging guitar and screams.

Founded by guitarist and singer Shaun Morgan in South Africa under the name Saron Gas, Seether has always leaned heavily into their front-man’s charm for an appeal that transcends their grit and melancholy. “Si Vis Pacem, Para Bellum” is a clear demonstration of maturity beyond the albums often cited as the band’s peak, including both “Karma and Effect” and “Disclaimer II.” The record is teeming with aggression and heaviness from opening track “Dead and Gone” on through “Beg” with introspective detours through acoustic-fringed mournfulness. This variety is a mark of Seether’s continued pursuit of stylistic growth and Morgan’s personal growth as an artist and songwriter, capturing versatility with a voice that screams with the same apparent ease as it croons soft regrets. “Buried In the Sand” sees Morgan at the top of his vocal game, and though the track itself is somewhat of a slog for the album’s midpoint, the sheer emotional intention imbued into his tones are a reassurance that his adoration has always been well-deserved.

While “Si Vis Pacem, Para Bellum” is a brilliant display of Seether’s growth, it is not without its fair share of continuity or familiarity. This album is in no way a departure from the strengths which Seether has embraced over the past two decades, but instead uses the wisdom gained from experience to make the best of those strengths. “Wasteland” takes place in an unmistakably youthful tone, its precarious swings from plodding to howling making for an emotional ride that reflects periods of self-doubt brought on by isolation. “Wasteland” is also the track with some of the greatest nostalgia towards Seether’s earlier works, digging deep into the band’s stylistic roots for an expression that is comforting in its subtle callbacks. Despite its darker undertones, “Si Vis Pacem, Para Bellum” is not simply a landscape of solitude or deprivation, but a showcase of generating warmth without abandoning the darker tenants of the genre. 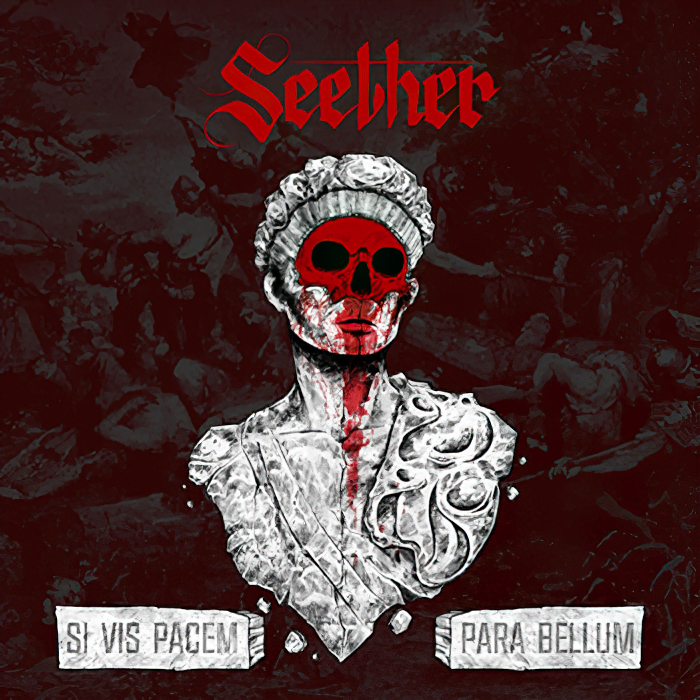 Though Seether has always boasted a relatively stable lineup, this is the first album to welcome new guitarist Corey Lowery into the fold as the outfit’s new lead guitarist. Meshing effortlessly with Seether’s sound and integrating with the long-established cohesion among other members, powerful single “Beg” is a demonstration that Lowery is as ambitious as he is adaptable. As the album’s second single, there is no question that “Beg” shows Seether ready for a new era, one which embraces distortion and high intensity as the cornerstone for relentlessly dynamic soundscapes. Accompanied by a music video with imagery as dark as the instrumentation, Seether seizes their newfound maturity in more ways than simple sonic evolution. The sinister undertones highlighted in “Beg” are exemplified in later track “Pride Before the Fall,” a natural follow up to the album’s electrifying peak. With “Drift Away” serving as a buffer between the two, the descent to the album’s conclusion is well-timed and feels entirely organic in its pursuit.

Seether’s instrumental and vocal clarity and consistent production are the finishing touches on an album which is structurally and stylistically sound. “Bruised and Bloodied” is perhaps the best example of longtime bassist Dale Stewart showing off his instrumental capabilities, though his contributions are also what give “Dead and Done” its boundless depth. The care paid to the bass throughout the album not only gives Seether undeniable character but demonstrates an approach to songwriting which took into account each musicians’ contributions in equal measure. Continued maturity and care paid to a long-established sound make “Si Vis Pacem, Para Bellum” another worthy addition to a fabled Seether discography and shows that this aging rock act has no plans of slowing down any time soon.

Metal meets grunge in Seether’s latest opus, one which explores the dimensions of the human heart with as much grace as it harnesses unbounded fury. “Si Vis Pacem, Para Bellum” covers a broad spectrum of emotions with versatility in musicianship for a strong addition to the band’s fabled discography.