Let me start with a full disclosure: I love to review albums by Brazilian bands. Those of us who came from the land of Pelé, Ronaldo and Neymar have an exacerbated sense of self-deprecation, but when we’re living outside of Brazil, this somewhat takes the opposite effect: the smallest sight of a compatriot doing well sparks our curiosity and interest. It was, then, with great joy that I received Nervosa’s third album Downfall of Mankind to review, and they certainly made my job easier by delivering a jaw-dropping record.

The casual metal listener (if they exist at all) might think that in Brazil only sunny skies, samba and soccer abound. However, look deeper and you’ll find plenty to be angry about, and there’s no shortage of fuel for metal songs there. Particularly in São Paulo, the city where Nervosa comes from, an urban jungle marred by violence, inequality, pollution and endless traffic jams. It’s no surprise that they can come up with such an aggressive sound.

Women’s presence in metal has become more and more prominent: in the 80’s we had Doro Pesch, Lita Ford and Leather Leone, whereas now many more women are grabbing metal by the horns and getting their voices heard. In theory, the fact that Nervosa is an all-female band shouldn’t even be worth mentioning. However, I dare to say that rarely has a group of women sounded so angry and brutal, and with so much conviction about their mission statement. Their sound is thrash metal with raw aggression and untamed power, and no room for glamour or flourishes. They’re only in their third album, but when you press play, you already know what to expect of them.

Released last June 1st 2018, Downfall of Mankind contains 13 songs, with one bonus track. Throughout the album they show maturity and aggressiveness like they haven’t before, and it’s their most consistent effort to date. Joining forces with producer Martin Furia, who previously worked with Destruction, Flotsam & Jetsam and Evil Invaders and also toured with Nervosa as a sound engineer, seemed like the right decision. The result perfectly captures the live energy and the old school character that defines the band without neglecting the strengths of a modern, compact soundscape. 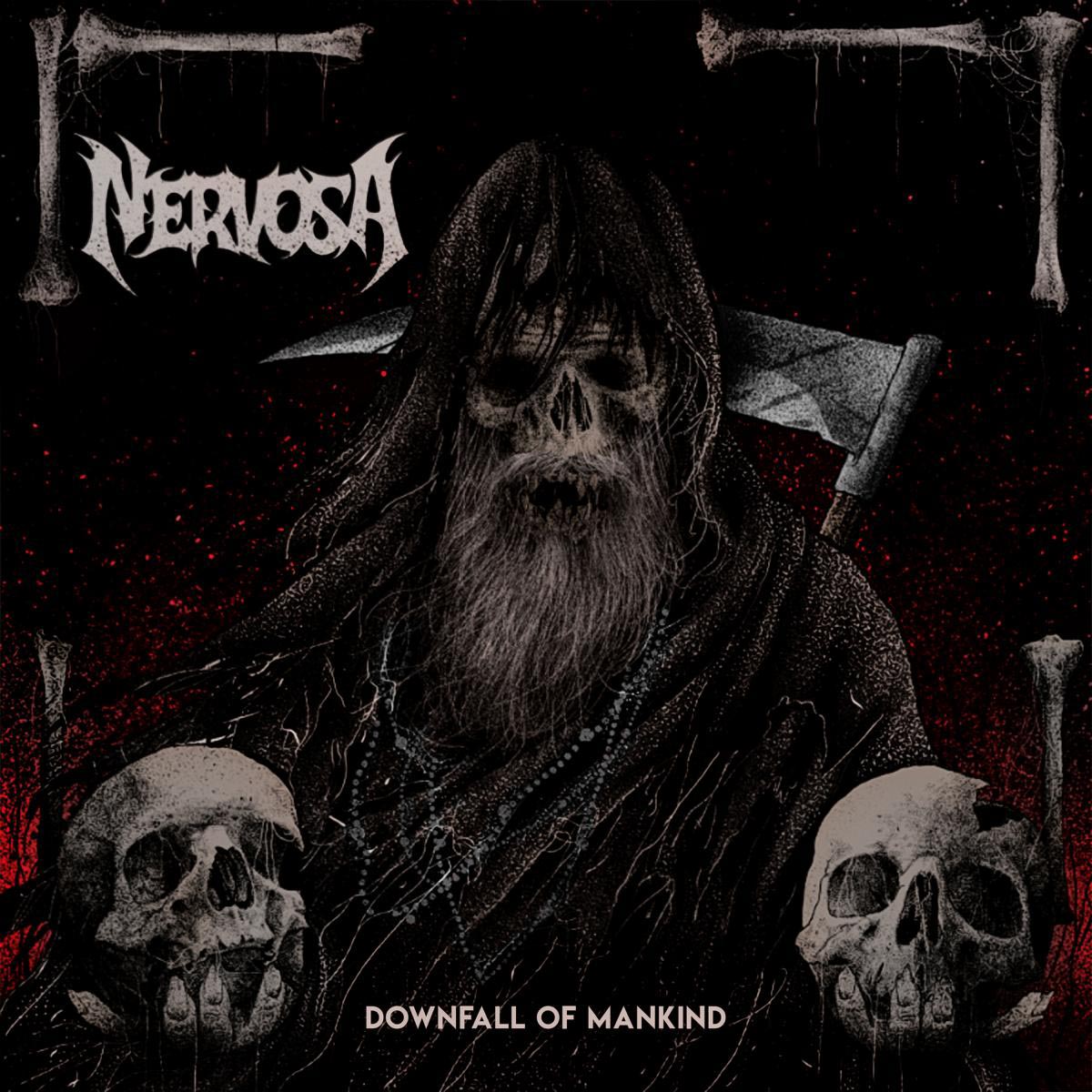 As the evil whispers in the intro ominously announce the new album, the listener is allowed a few seconds to adjust his ears to what’s coming next. “Horrordome” and “Never Forget Never Repeat” kick in as the perfect one-two punch, with razor-sharp riffage, ghoulish vocals and heart-attack inducing drum beats. Their lyrical content matches the sound perfectly, with distilled anger, horror tales, dystopic visions and social criticism. In Nervosa’s own words, “Enslaved” is a festival-ready song, which has a lot of groove and tempo changes. Mid-tempo songs like “Bleeding” or “Vultures” in principle should provide some relief for the ears, but they sound so heavy and relentless that you’ll still find yourself gripping to your seat while listening to them.

On “Conflict” and “… And Justice for Whom”, the girls show their love for thrash, sounding like a modern and more aggressive version of Anthrax. However, they are not completely stranger to optimism, as the track “Raise Your Fist” indicates. This song shows excerpts from speeches by Martin Luther King, Nelson Mandela, Mahatma Gandhi and Malala Yousafzai, and a chorus that begs to be sung at the top of the metalhead’s lungs: “If you believe in equal rights, raise your fist, don’t fear!”.  Granted, it’s not the most original and groundbreaking album you’ll ever hear, but sometimes all we need is that righteous dose of familiarity to scratch our death metal itch. The guitar solos here are sparse and direct, and a perfect example of that is shown in “Fear, Violence and Massacre”.  Rather than being a product of technical limitations though, this is a stylistic choice: the last thing you want is an album that is so direct in its intent to lose punch due to additional flourishes.

As is the case in all their albums, the girls still found time to include a song in Portuguese, “Cultura do Estupro” (“Rape culture”), with Joao Gordo from Brazilian punk legends Ratos de Porão making a guest appearance. The bonus track “Selfish Battle” has Rodrigo Oliveira (Korzus) on drums and Michael Gilbert (Flotsam & Jetsam) on guitar, and is remarkably different from the rest, sounding like a lost and heavier track in Dio’s catalogue.

Overall, Nervosa’s savagely cruel musical approach works just fine in this release, and if you’re a fan of death and thrash metal, this album will grab you by the throat and succeed with straight-ahead stomp and purposefully economical arrangements. A highly focused and merciless killing machine, Nervosa is ready to give the thrashing competition a run for its money.

As the horribly beautiful (or beautifully horrible) cover indicates, there’s no room for flourishes here. The listener will be rewarded with spine-tingling and ear-piercing metal, with almost no breathing space. A relentless collection of songs where the girls’ love for thrash and death metal is distilled in razor-sharp riffs, raspy and screaming vocals, and suffocating blast beats. Rarely has the expression “girl power” been more aptly used than when describing this band