When it comes to black metal, two points of reference have always been the quality of the production and the absolute discord that musicians are able to sow while channeling spirits of darkness. In the case of French black metal band Neige Morte, the trio channels chaos through a lense of raw grittiness to create a sound that is an endless onslaught of suffocating dissonance.  Formed in 2009, Neige Morte have never shied away from adding the disarray of pure noise to the unique collection of styles that comprise their sound, a trend which continued from their debut album all the way to their upcoming full-length album “IIII.” Though they do not dodge categorization entirely, perhaps the best way to describe Neige Morte is by the feeling that their upcoming release strikes into the hearts of their listeners: pure ice alongside aural discontent.

Those looking for an easy listening experience need not bother picking up “IIII:” this is an album reserved for fans of filth and vitriol, those that hope to subject themselves to despairing and anger distorted beyond comprehension. The fractured shrieking and static of title track “IIII” pierce the listener with furious abandon before fading away to nothing more than a distant heartbeat, an almost abstract freeform which lends itself best to those with an affinity for coldness and desolation in place of a heart. “IIII” closes the album at almost eight minutes long, beginning with a deluge of percussion that persists at a punishing pace. The drums on the album are delivered by JG, an ever-present force in even the slowest and most sorrow-laden tracks on “IIII.” Though primarily focusing on black and noise, the death metal distinctions are heavily contributed by the execution on drums, particularly in the shifting tempos and expressive bridges found in second track “Hlcst.

Looking at the timestamps on “IIII,” the album appears to be a fragmented collage of short furious bursts framing longer, more explorative forays into slow passages. It is in these moments where SA’s guitar lets out low, drawn-out riffs that crackle into ephemeral sparks of static. This structural ebb and flow across and within songs is where Neige Morte finds their greatest strength: while individual songs may be oppressive or weak on their own, the natural flow within and between songs speaks to artists who see the entire album from any given point in each single track. The journey of “IIII” is continuous and aware of both its history and future, from the sullen and bass-heavy valleys of “Svart Hal” to the crushing lance of “Lamna Inga Spar,” fulfilling a vision that existed with the album as a complete concept. While tracks such as “Iceage” may initially appear to be nothing more than an interlude to break up the more aggressive punches that sit on either side of it, listening through “IIII” in its entirety reveals that these minutes of simmering noise are not meant to provide peace, but to further disturb the listener from a false sense of solace in the near-silence. 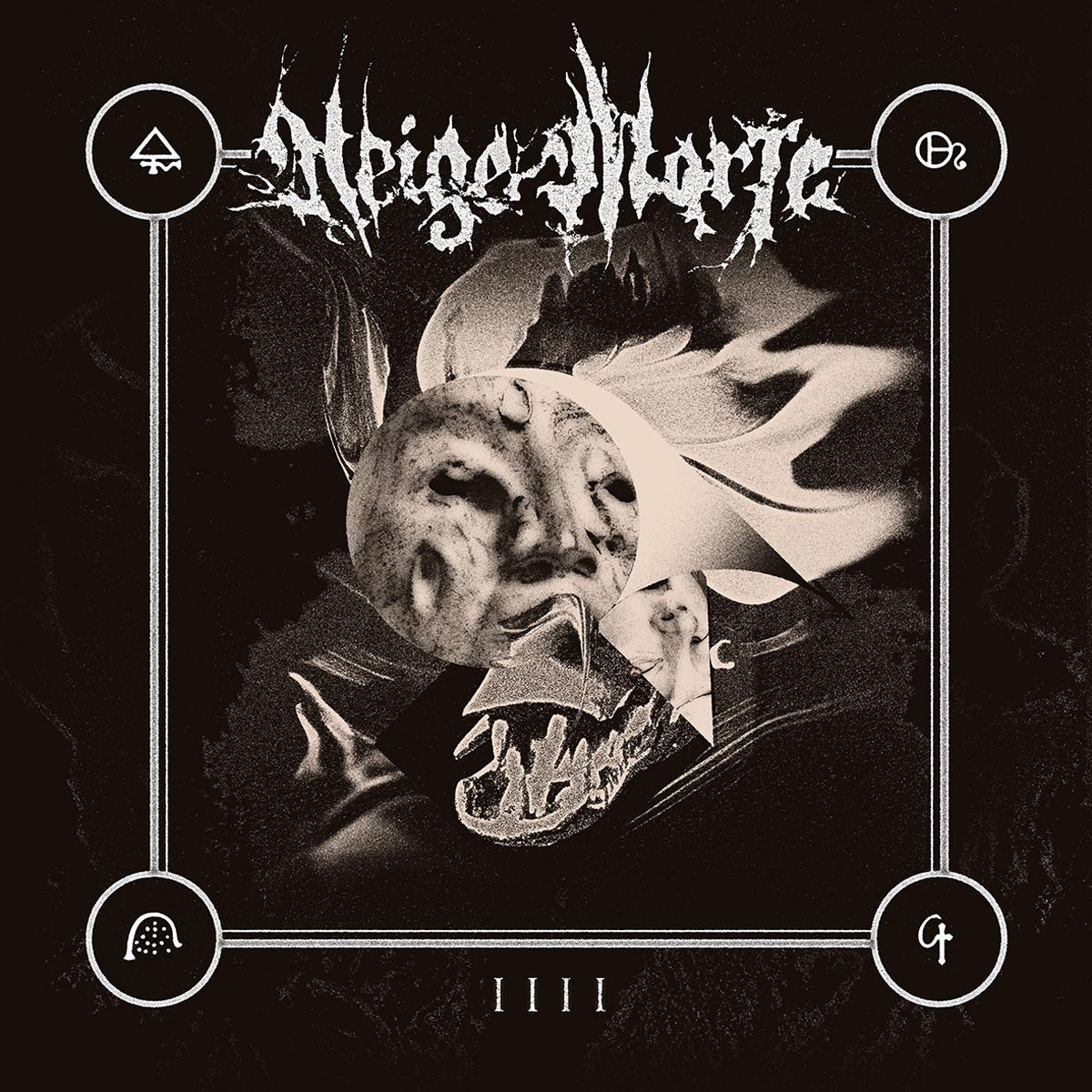 This unsteady shift from suffocation to silence, often traipsing through minutes of atmospheric doom to make its point, is an uncanny reflection of human emotion. Tidals waves of all-or-nothing create an aural experience that overwhelms in some moments and creates subtle discomfort at others. Vocals are sparing to create such an effect, with vocalist SA emerging more often than not as the weakest link. While it’s clear that the distant howls are so muted and distorted to achieve the particular unsettling effect that “IIII” strives after, the utter lack of enunciation and failure to demonstrate more than a near monotone across screams distract more often than they complement. At other times bass and guitar seem to spar rather than compliment one another, jarring from otherwise delightful atmosphering ponderings in “Svart Hal.

Heavy in both static and in spirit, Neige Morte have approached “IIII” as a complete and comprehensive story told with distorted guitars and a careful balance of noise. Its chaos entirely overwhelming at some points and simply disconcerting at other, “IIII” works with all songs playing together in successive bliss, but leaves individual tracks fragmented and unsuccessful standalones. Eleven years and three albums under their belts give Neige Morte utter confidence as they deliver this sonic storm, a confidence which sometimes oversteps its bounds as the more somber wanderings of this latest opus prove somewhat directionless. Despite the cold shock that washes over listeners from the echoing void of “The Call” onwards, Neige Morte have crafted a story that pulls lost souls past their teeth and swallows them whole.

Sowing seeds of dissonance and arctic frost with elements of black metal and noise, Neige Morte offer an album that is dynamic in its tone and pacing while unforgiving in its brutality. Stunningly oppressive in its aggression and thick with the grit of utter vitriol, the infectious cloud of gloom that hangs over “IIII” is made of pure darkness.