While it would be ideal to pretend like the music industry is a nonstop party of the fresh and vivacious, the naked reality is that it is often the realm of the rote and humdrum. It can be regrettably easy to fall into a jaded groove where one has seen and heard it all before. Very little seems new, exciting, or interesting. In a rare twist, just when we were “this close” to drifting off at the wheel, a relatively unknown act has resurfaced after a ten-year hibernation, and this bear is one hungry grizzly. “Resurfaced” may be an understatement. It’s more like when the Soviet nuclear sub comes flying out of the water in “Hunt for Red October.” This is all the best we can do to use words to explain the return of Mind Key with their Mark III album offering, available July 12 this year.

If you are unfamiliar, Mind Key is an Italian melodic prog-metal band, who released a debut album in 2004 around core musicians Dario de Cicco (keyboards) and Emanuele Colella (guitars). For their second album in 2009, they integrated Aurelio Fierro on lead vocals. You can actually see Aurelio as a contestant on the 2018 season of “The Voice of Italy,” where he acquitted himself quite admirably, especially with the old Abbey Road standby “Oh Darling.” The band has been on break the last few years for an assortment of personal reasons, but they are back with a polished new sound on the Mark III album.

Joined by two new band members, bassist Lucio Grilli (ex-Soul Secret) and drummer Mirko De Maio (The Flower Kings, Hangarvain), Mind Key blazes a new trail of some of the best melodic (and very listenable) material we’ve had on our plate since WET or Airrace. The album opens up with a synthetic keyboard-centric landscape one may expect from Jolly or the new Michael Romeo project. Signor Fierro wastes no time in plowing in with hard-hitting vocal verses, with power on a level with Ronnie Romero. It did not escape our attention that during production, the band was posting quick ad hoc videos of Fierro’s vocal takes, and the delivery is the real deal. It is like listening to the old isolated vocal takes of Brad Delp on the Boston debut album. In an age dominated by corrected modulated vocal tracks, it is so refreshing when there is a singer who can deliver genuine world-class vocal parts in a single take.

The first track continues into the chorus, with tasty 80s crunch rhythm guitar, tantalizingly retro keyboard tones, and catchy overall arrangement. What was really enjoyable was when the song just slams to a stop so beautiful two-part guitar lead harmonies can lead us into a blistering guitar-and-keyboard call-and-response section. The first track is also semi-titular, and tied to the fun album cover, featuring an intense space-faring Cheshire Cat clutching a digital holographic Queen of Hearts playing card, a “Drink Me” flask, and a very lost looking Alice floating through the cosmos.

The next track is decidedly in the prog-metal camp, built upon rapid-fire keys normally found in the universe of Symphony X and Seventh Wonder. The song, “Hank (The Blazing Eyes),” has all the markings of a straight-ahead fast tempo metal track, but halfway in, it slows way the hell down, enlists the support of some bluesy bass grooves, and the builds to a small crescendo before slowing down even more, with some piano and synth harp, inviting a moment of interplay between Aurelio’s vocals and Emanuele’s lead guitar parts, eventually making a seamless transition back into the original driving tempo, before crashing to a close. 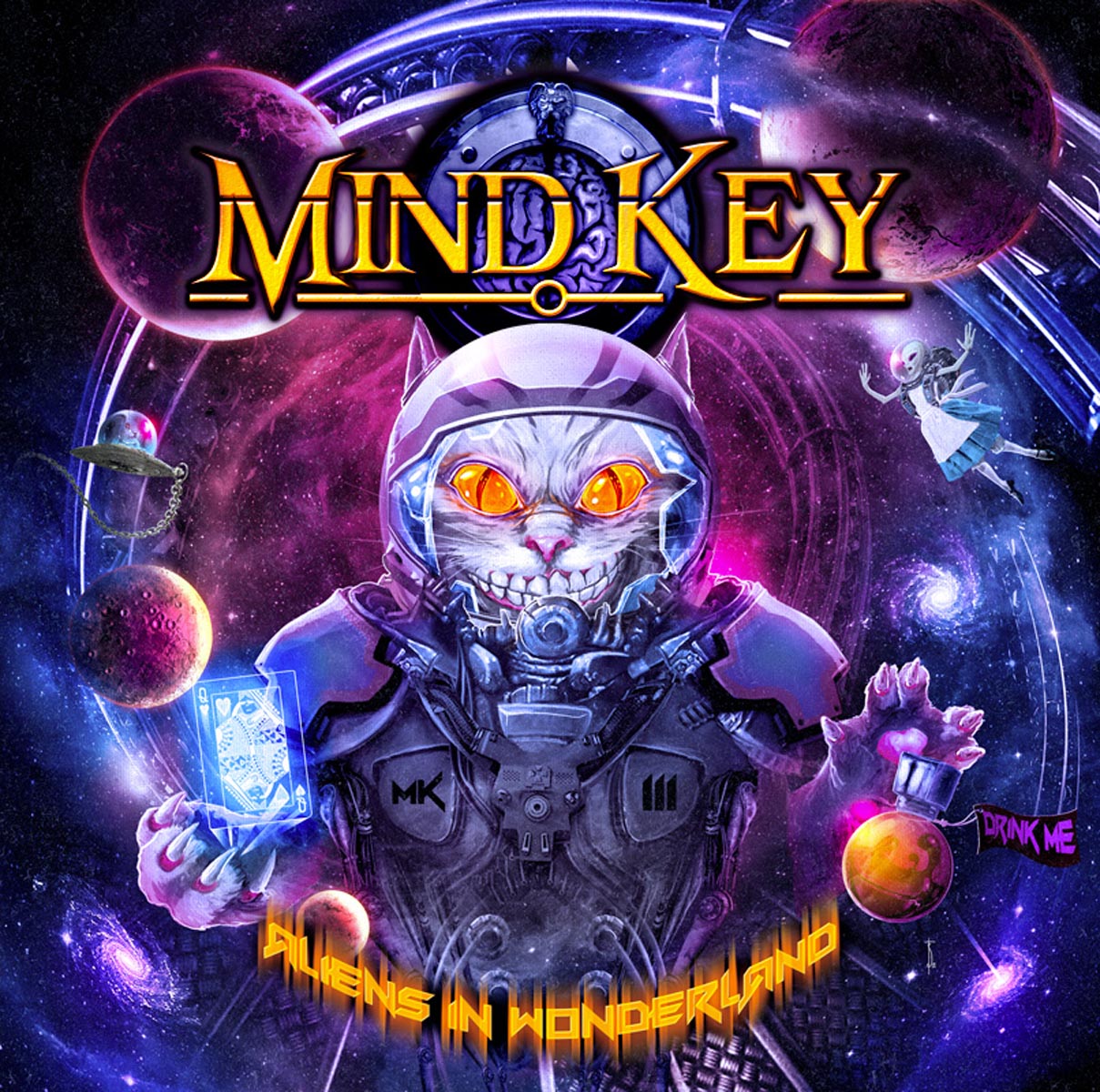 The third track, “Hate at First Sight,” is easily a favorite. The synth orchestral strings which kick off the song come back several times through the track to tie off the chorus nicely. There are also some great grooves throughout the track, a la Evergrey or Sevendust. The guitar solo is everything a good solo should be. The playing is clean, melodic, proficient, vibrato-rich, and the tone itself could hardly be better: the perfect blend of heavy, clean, sustain and reverb. The chorus of the song is just such a winner. As the driving rhythm guitar and synth strings bring the song to an end, you just don’t want it to be over.

The next song, “Angry Men,” seems to base its lyrics entirely on “Twelve Angry Men,” although one can understand where the copyright surrounding that song name could be tricky. No harm done, it happens to the best of us; see also Iron Maiden and Frank Herbert’s “Dune.” The track opens with nylon classical strings before getting right down to the keys-and-distortion texture which forms the skeleton of the album’s anatomy. As a whole, from the driving riffs, the chorus, and the trade-off solos between guitars and keys, this song is probably the most “basic” of the album’s offerings, and yet it remains absolutely rock solid, which speaks well for the baseline of the album as a whole.

Other highlights of the album include the ear-pleasing chorus and lead guitar on “Oblivion,” as well as the incredible riffing on “Vertigo.” The penultimate song, “Pure Heart” has more good vibes than an entire Survivor album, and “Non-Existence” is like the single best song Blue Murder never did. The funky bass and the sweet guitar crunch! It’s a thing of beauty.

OK, so here’s the thing. If we get back to the aforementioned jaded cynicism at the beginning of this album review, there is, in fact, nothing technically new on this album that has never been done before. However, it is a bit like the last two Haken albums, because what it does is combine existing musical elements in new ways, and it does it so goddamned well it’s unbelievable. The vocals are powerful, versatile, and commanding. The guitar playing is superbly balanced, delivering both outstanding rhythm work as well as impressive leads. The drums and bass sound great, and are in exactly the right pocket at all times, with the bass getting expressive and groovy only when perfectly appropriate. The keyboards of Dario de Cicco may actually be the MVP of this particular ballgame. This album may be one of the very best examples of fusing contemporary prog-metal keys with nostalgic 1980s AOR keyboard tones, and making it all work in an appetizing way. Well-produced, and sounding great in a studio through powered Mackies, there is almost no end to the good things to say about this record. You should definitely try to put a saddle on this Dark Horse when it hits the road on 12 July. Pick it up from Frontiers records here.

Wow! Where did this album come from? This is melodic metal so good you’ll wanna slap yo mama. We are so glad music can move across borders, because if Mind Key made a pizza this good, we would be forced to move to Italy to eat it all the time. From the hooks, the melodies, the amazing instrumental work to the feelgood elements of AOR nostalgia, the band has really whipped up one tasty dish here. This is one to watch for one of the best melodic metal albums of the year