It’s never too late to pursue one’s dreams, with few better demonstrations than the debut album “Of Gods and Men” from thrash-rooted metal band MaelstroM. Though a number of other American metal bands are also known by this name, this New York-based group first appeared on the scene in 1989 with an instantly popular demo after forming the prior year. A handful of demos, long hiatuses, and a single EP in 2008 made up the 32 years between MaelstroM’s formation and this year’s release. Dedication and perseverance have led to a first offering which is both boldly and stylistically diverse, borrowing from thrash, power, and progressive metal for a theatrical behemoth in three acts. Decades of pent-up energy and eager anticipation are obvious throughout an album that is cinematic and overwhelming in its sheer size and scope, but certainly able to fulfill its promise of a solid debut.

The very same enthusiasm that makes a seventy-minute album possible is the same Achilles heel which strikes MaelstroM repeatedly throughout “Of Gods and Men.” It’s clear the dreams and ideas which led to the creation of the album were fervent, and the hunger to leap headfirst into the creative seas gives way to moments that are entirely overwhelming in their execution. “Army From Ash” sees guitars in the vein of early death metal, vocals pulling straight from abrasive old-school thrash, and sound effects layered over acoustic flourishes. Such an approach is more than mere whiplash: it’s a straightforward inundation of omnidirectional chaos. Yet “Army From Ash” is also the particular track which highlights how this passion works to MaelstroM’s advantage as much to their disadvantage: though it is only the second track on the album, its emotional intonations give the listener every reason to become highly invested in the tale being told. This album tells a multidimensional story, and something as vibrant as “Army From Ash” and following track “A Mirror Calls” are two tracks where the attempts at crafting something epic is palpable.

Impressive variety is one consequence of this particular approach to songwriting, one which sees wild swings in atmospheric development across the record. One such example is penultimate track “Predestined,” pulled straight from the heart of old-school and stuffed with well-balanced shredding in the hands of guitarist and songwriter Joey Lodes. Weighing technical complexity and speed against one another, “Predestined” is a delightful taste of the uncompromising scene which gave rise to MaelstroM in their early years. Following directly on its heels is “SonRise,” the epic closing track that pulls more from power metal in the footsteps of Symphony X for its grand swells of might and magnificence. It’s difficult to weigh the orchestration and impressive build-up to “SonRise” against earlier crescendos of strings and quickfire drumming, but navigating the shifting tides of “SonRise” provides unique sonic pleasure on its own. 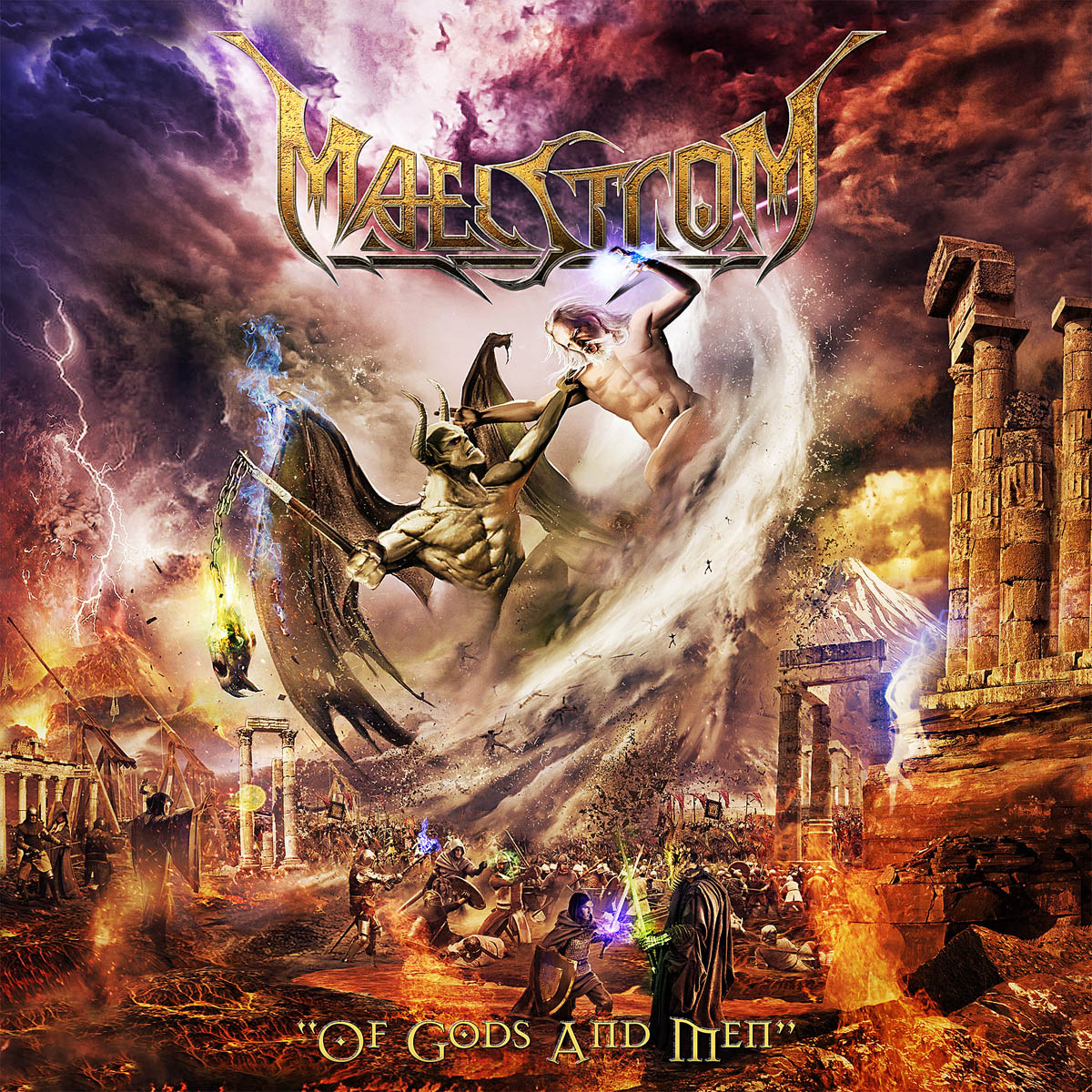 “Of Gods and Men” Album Artwork

Split into three distinct acts, “Of Gods and Men” features songs that find their strength in powerful and attention-capturing choruses, but others still enthrall with a distinct poetic lull across verses. Strictly instrumental passages such as those on “The Mirror Calls” and “Lament of the Fallen” demonstrate a creator capable of purposeful and direct songwriting that succeeds not just buried behind vocals, but as a distinct standalone force. Instrumental interludes between verses, particularly those that offer some elements of orchestration and symphonic swells, are some of the standout features which made “Of Gods and Men” a great listen. The transitions are certainly something to pay attention to in this album, especially the standout masterpiece “The Mirror Calls.”

There’s no question that the wealth of material within this album is the result is a melting pot of inspiration which has both moments of stunning clarity and also overwhelming discord. On the not so bright side, the muddy and unbalanced sonic production really affects the listening experience, the final product would have been totally different if the hands of Jens Bogren or Jacob Hansen were on deck. In spite of that, the array of music layers are part of the challenge of an album that is dense with ideas and explored concepts, with something new to appreciate on each subsequent listen. A good amount of care was undoubtedly put into “Of Gods and Men,” and sitting down to listen to its tale is definitely a daunting task. Whether one finds the kaleidoscope of styles crashing together as comforting or chaos, the most significant light is that all members of MaelstroM poured their souls in every moment of music contained in these 10 songs. With all of its highs and lows, the creative energy which gives “Of Gods and Men” its wings carry this album to ambitious heights.

“Of Gods and Men” Track-listing:

An ambitious debut culminating three decades of creative energy, “Of Gods and Men” is cinematic in its size and sonic scope. Rooted in the dawn of old-school thrash, Maelstrom has drawn influence from power and progressive metal and used an aggressive dose of shredding to create an album that lives up to the band's name