As winter draws near and nights grow longer, music lovers are treated to what is indeed the most wonderful time of the year. December rolls around just days after record labels purge their stocks in irresistible Black Friday sales, and tempting long-sleeved merchandise finally hits the shelves. Most anticipated of all is the inevitable Album of the Year lists, which have bands and fans alike waiting with baited breath to see who tops this year’s podiums. But although these articles speak of conclusions and of finality, December still holds a number of anticipated releases that are worth listening to, and Majestica’s Christmas album “A Christmas Carol” is one  of that number. As attention turns to trimming trees and hanging stockings, there’s presents to be found within the folds of Majestica’s sophomore release, an album which is a gift to power metal fans and Christmas enthusiasts alike.

The narrow niche of Christmas music and the intensity of metal have long enjoyed sporadic crossovers, perhaps most notably in the instrumental interpretations of classic Christmas songs by August Burns Red. 2020 has continued the trend of exceptionalism by providing an extraordinary amount of holiday collections from metal and rock artists, including offerings from Ayreon’s mastermind Arjen Lucassen, Dream Theater, The Night Flight Orchestra, and Magnum, among others. While many of these unique takes seem to be inspired by the unexpected downtime brought on by the pandemic, “A Christmas Carol” is not some haphazard construction that came out of quarantined fever dreams. Rather, “A Christmas Carol” is a stunningly ambitious project that combines the indescribable allure of the holiday season with the bombastic showmanship that power metal has long been known for. The album presents Majestica’s take on the beloved holiday fable of Ebenezer Scrooge and his journey to find meaning in Christmas.

The most interesting story, however, is the tale that runs parallel to the album’s narrative. This is the story of inspired musicians fighting to capture the magic of an ephemeral season, one which blossoms with warmth amongst the cold and kindness against humanity’s frost for a few fleeting weeks. Long known for his role in Majestica’s predecessor ReinXeed, front-man Tommy Johansson took greater strides into the spotlight when he took on the mantle of camo pants as Sabaton’s newest guitarist. Though his skills on strings are dexterous beyond a doubt, asking a vocalist with the skill and grace of Johansson to relegate himself to the guitar is like asking Michaelangelo to lend a hand in painting your backyard fence. Majestica’s debut album “Above the Sky” showed that Johansson is a vocalist that deserves to be mentioned alongside legendary vocal powerhouses like Michael Kiske and Tobias Sammet. Most of all, Johansson manages this with  unwavering charisma and masterful delivery of riffs throughout. “A Christmas Carol” reaffirms his absolute prowess over the vocal realm, blending angelic grace and tempestuous power for lead vocals that soar in unparalleled might. Their depth and smoothness, carrying from the intensity of “Ghost of Marley” through the joyousness of “A Christmas Has Come,” are consistently alluring and pure sonic decadence. 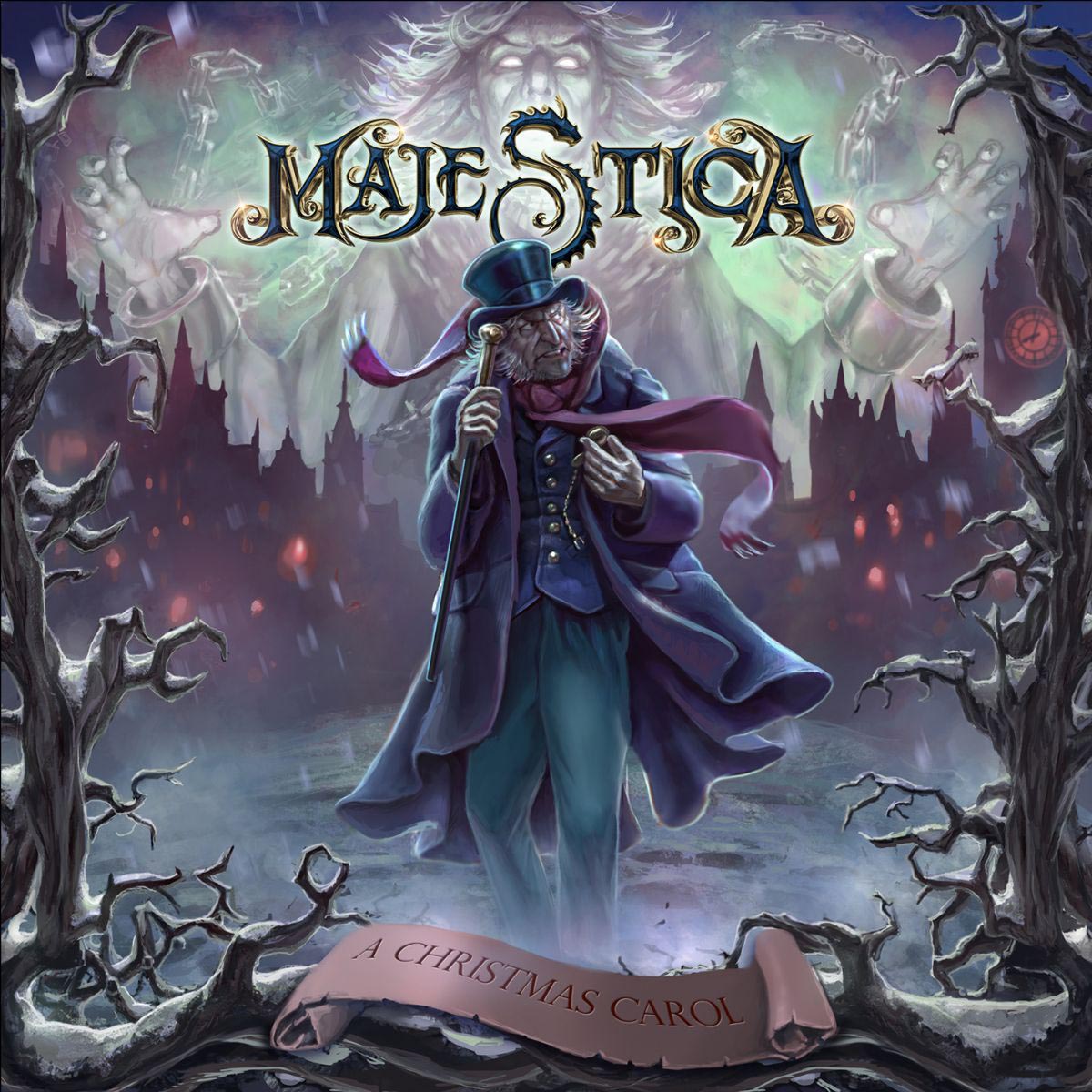 Johanssson is joined by a number of voice actors and backing vocals from the rest of the band, building out a narrative musical faithful to both the band’s strengths and the project’s source material. From the subtle depth added in the penultimate “A Christmas Has Come” to the sharp punctuation opening “Ghost of Christmas to Come,” the zealous commitment pulls the listener ever-deeper into immersion that never once fragments. Each track flows flawlessly from one into the other, capturing a range of emotions and instrumental capabilities of Majestica’s other members. “Ghost of Christmas Present” has choral vocals rivaling carolers in the night, balancing comfortably over a warm background of base and steady drums. Drummer Joel Kollberg is part of what keeps the album so unwavering even in the more tender hymn of “The Joy of Christmas” up through the crackling fire of “A Christmas Story.”  Kollberg‘s role in the mix, along with the careful balance of instruments against Johansson‘s lead, are part of the composition that makes the musical approach work so well.

Aside from the gentle cascade of bells and aural rendition of twinkling lights, Majestica has captured some of the most beloved Christmas carols and carried them throughout “A Christmas Carol” without pulling beyond the realm of metal. There are hints of “Carol of the Bells” which seep through in bursts of passionate guitar, and verses which follow in the melody of “Hark, The Herald Angels Sing,” while other passages still borrow lyrics from long-sung classics. The combination between tradition and the band’s own strengths in both speed and heaviness allow the album to remain unmistakably in the realm of Christmastime without sacrificing any of the spectacular abilities shared across the quartet. For sheer intensity one needs look no further than “Ghost of Marley,” which toes the line of apprehension without ever diving into darkness, and has the power to fill a room with its forcefulness. Each pique is met with a comforting instrumental lull, allowing guitarist Alex Oriz to show his chops.

“A Christmas Carol” is overflowing with the familiar comforts of seasonal magic while offering listeners the warm embrace of power metal they know and love. Combined with musicianship of the highest caliber, vocals that seem to pour down from on high, and impeccable production value, Majestica offers a sophomore album with no visible weakness. The band has pushed the boundaries of their vision while playing to all of their individual strengths for a holiday album like no other, one which should leave its creators both joyful and triumphant in a feat of innovation. Though the Christmas season may be but a short venture each year, it is this very ephemeral nature which makes the force of “A Christmas Carol” so inviting. Above all else is the sheer passion Majestica exudes in their execution of this timeless tale, making a bold concept and an unlikely genre mashup soar beyond successful. And even when the lights come down and are stowed away from another year, listeners are likely to find the welcoming strains of “A Christmas Carol” still echoing in their ears.

Every Christmas story carries with it the same thread of holiday magic, the tale of a transformative experience filled with awe, warmth, and wonder. For power metal fans across the globe, Majestica’s innovative and dazzling “A Christmas Carol” is this year’s quintessential holiday experience.