It seems like just yesterday that the critics and fans were calling Kenny Wayne Shepherd a “prodigy.”  He was just a kid with a big guitar and an even bigger blues sound, following in the footsteps of his idol and mentor Stevie Ray Vaughan—a meeting between the two when KWS was just seven lit the spark that set his music career a-blazing.  And six years later, the kid was already wowing audiences throughout the South.

But that was 30 years ago (WHAT?!?!?) and KWS is definitely not a kid and he’s way beyond prodigy status.  What he is: a blues-rock veteran who has had hits, a ton of sales, and incredible live performances.  One of those is documented on his new release, “Straight to You Live.”  It is a snapshot in time and of place, documenting where this now 43-year-old guitar slinger is at this point in his career.

The time:  2019.  The place:  Germany’s famed Rockpalast show, which features some of the top acts in the biz.

And the assessment: KWS is at the top of his game.  From the very first track.

And that would be “Woman Like You,” which not so coincidentally led off the last studio album, “The Traveler.”  It’s a great way to break the ice, with a sledgehammer attack propelled by drummer Chris Layton and bassist Tony Franklin.  As always—or at least it seems like always—Noah Hunt’s singing is the perfect foil for Mr. Shepherd’s guitar leads and fills.

Barely a beat passes before the band punches into “Long Time Running,” another up-tempo effort.  This is where the horn section comes in, adding a fullness and texture that makes for a wall of sound effect—nicely.  Oh, and KWS shows his ability as harmony vocalist, something he’s doing with increasing frequency and confidence.

And on and on. 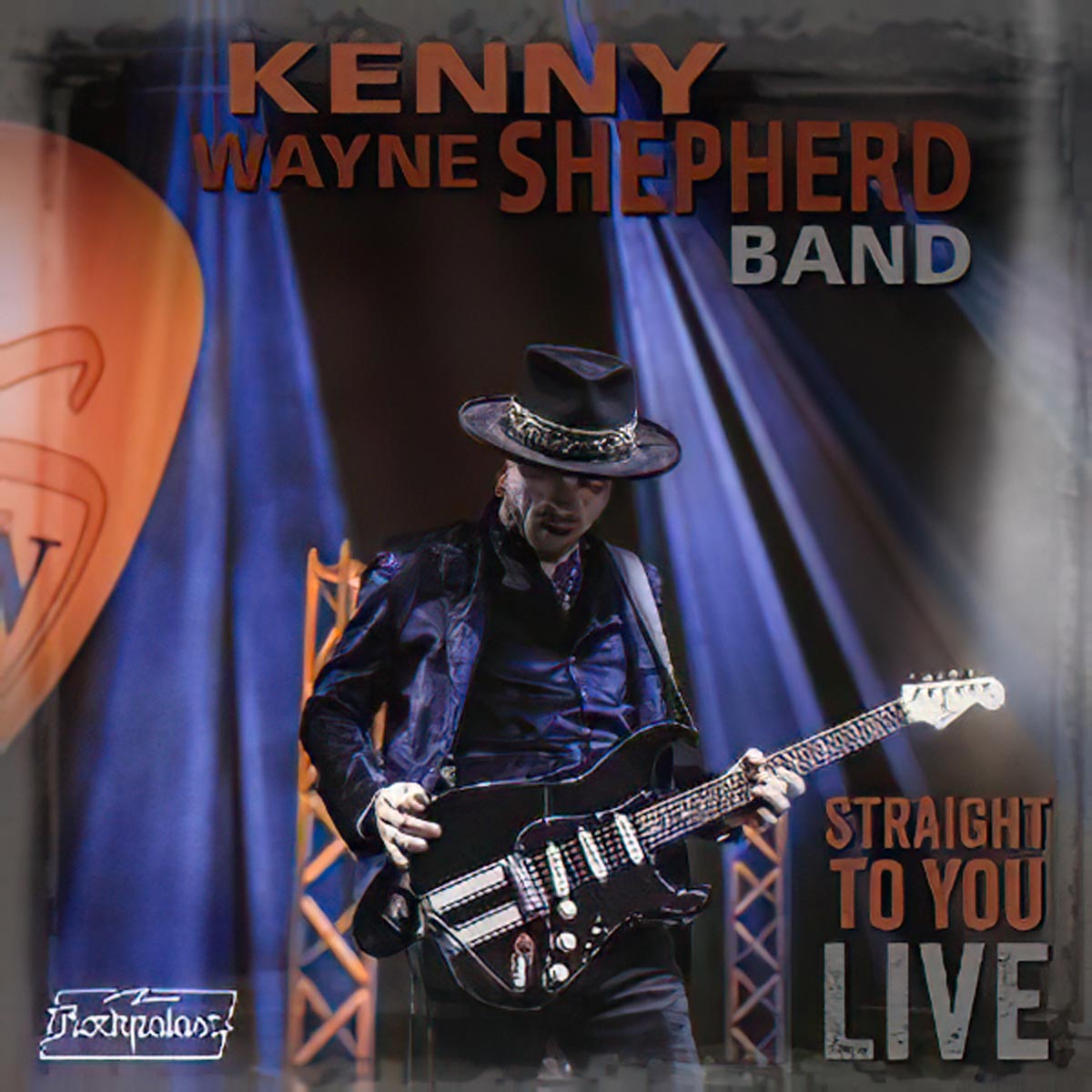 “Straight to You: Live” Album Artwork

I’m not going to do a complete rundown of every song in this impressive release.  While the songs vary from jump up and down blues rockers to slow burners, each has its own character and appeal.  But there are three in particular that jump out.

One is a cover of Joe Walsh’s “Turn to Stone.”  Once again, the horn section blares out, Hunt’s voice (admittedly with a bit more range than Walsh’s) really resonates.  There’s a quiet section with interplay between the piano and guitar—and then KWS lets loose.  This is a guy who can shred, and proves it often, but he’s also learned about nuance and subtletly.  Sometimes one note, played over and over, really depicts feelings that are turning to stone.  Sometimes just a second of violence speaks volumes about the turmoils in a man’s soul.

The second piece is “Blue on Black,” Shepherd’s big 1998 hit (wait—was that really 22 years ago?).  Even though it’s now a generation old, the song still retains its mourning, menacing, multi-layered emotional recitation.  KWS’s axe wails, and Hunt’s voice has lost nothing over the years—if anything, he sounds more world-weary and beaten down.  This is a crowd favorite, and probably will be until the earth ceases to rotate around the sun.

The closing song is Shepherd’s usual finale: “Voodoo Child (Slight Return).”  This is an homage to two of the man’s heroes—Jimi Hendrix, who created and first presented it, and Stevie Ray Vaughan, Shepherd’s mentor who included it as a staple of his live sets.  And this is the way to finish things off, showing off the influences of two legendary musicians while maintaining one’s very personal style.  This cooks, for 11-and-a-half minutes of pure blues-rock joy.  Heck, even Noah Hunt takes on some of Hendrix’s vocalisms—here and there—but never loses that which make his own singing unique and perfect in this band.  When this one’s done, you may want to sit back and catch your breath for a few minutes.  Before hitting replay.

This is a song album, not a blues jam production.  As such, most of the songs are under seven minutes—with no fill, just taut lines and performances.  There’s almost no time between cuts, so this is a nearly 80-minute package of blues-rock at its finest.  High energy.  Astounding musicianship.  Great song selection.  Definitely not kid stuff.  Kenny Wayne Shepherd is a full-grown man, playing the blues in ways that only somebody who has experienced life can do.  Aging never sounded so good.

“Straight to You Live” Track-listing:

Kenny Wayne Shepherd and his band are all grown up and rockin’ on this great live release. Featuring a selection of KWS standards as well as covers, it shows the depth and breadth of one of the best known (and best-selling) blues rockers around. This one is a great Covid bridge until these guys are able to play live again.