I always thought of IQ’s monumental debut album “Tales from the Lush Attic” as the album Genesis would have made if they had reunited with Peter Gabriel and Steve Hackett and decided to go back to their roots after “Duke”. With songs of epic proportions, roaring guitar solos and wild instrumental breakdowns, IQ were among the artists who contributed to the revival of Progressive Rock – a genre that was thought long dead during the early 1980s. Several line-up changes, an excursion into more accessible pop music, ten more studio releases and almost four decades later, IQ are still touring and recording new music. The personnel carousel seems to almost have made a 360° spin, as nearly all of the original recording members are still (or again) playing in the band.

And progress has been made. IQ is far away from being a 70s-Genesis revival band. The drums don’t sound as if they were recorded in someone’s utility room and Peter Nicholls’ idiosyncratic voice is getting better and better with age. IQ found their own style with 1993’s “Ever” and started fine-tuning it throughout the decade, until it reached perfection with “Dark Matter” in 2005. Their last two efforts, 2009’s “Frequency” and 2014’s “The Road of Bones” steered the characteristic IQ-sound into darker, heavier territories, showing that the band is still not stagnating despite the many years in the business.

IQ is not a band that composes and records a song in half a week and just throws record after record out there. Between previous album release dates, there have always been four to five years during which the band presented their new songs to audiences around the world and re-arranged them until they felt worthy of releasing. That formula might have worked out with tracks from “Dark Matter”, “The Seventh House” or even “Frequency”. But many songs off “Resistance” need multiple spins until they reveal their melodic and structural qualities. Consequently, I was quite disappointed when I heard “For Another Lifetime” at the Artrock Festival in Reichenbach half a year ago. But after a couple of listens to the studio version on “Resistance”, the song clicked and turned out to be one of the best on the album. Many of the new songs lack a majestic chorus or a triumphant finale and are thus less accessible than earlier efforts – which I don’t mean as a bad thing.

“A Missile” opens up the album with a futuristic keyboard sound before the whole band kicks in with a heavy guitar riff, reminiscent of the band’s last album opener, “From The Outside In”. IQ have never sounded this determined and dark. Seamlessly, it transitions into the second track, “Rise”. Starting off similar to “The Road Of Bones” (the song), this epic tune constantly switches between quiet, melancholic verses and heavy outbursts, with a dramatic crescendo towards the end. 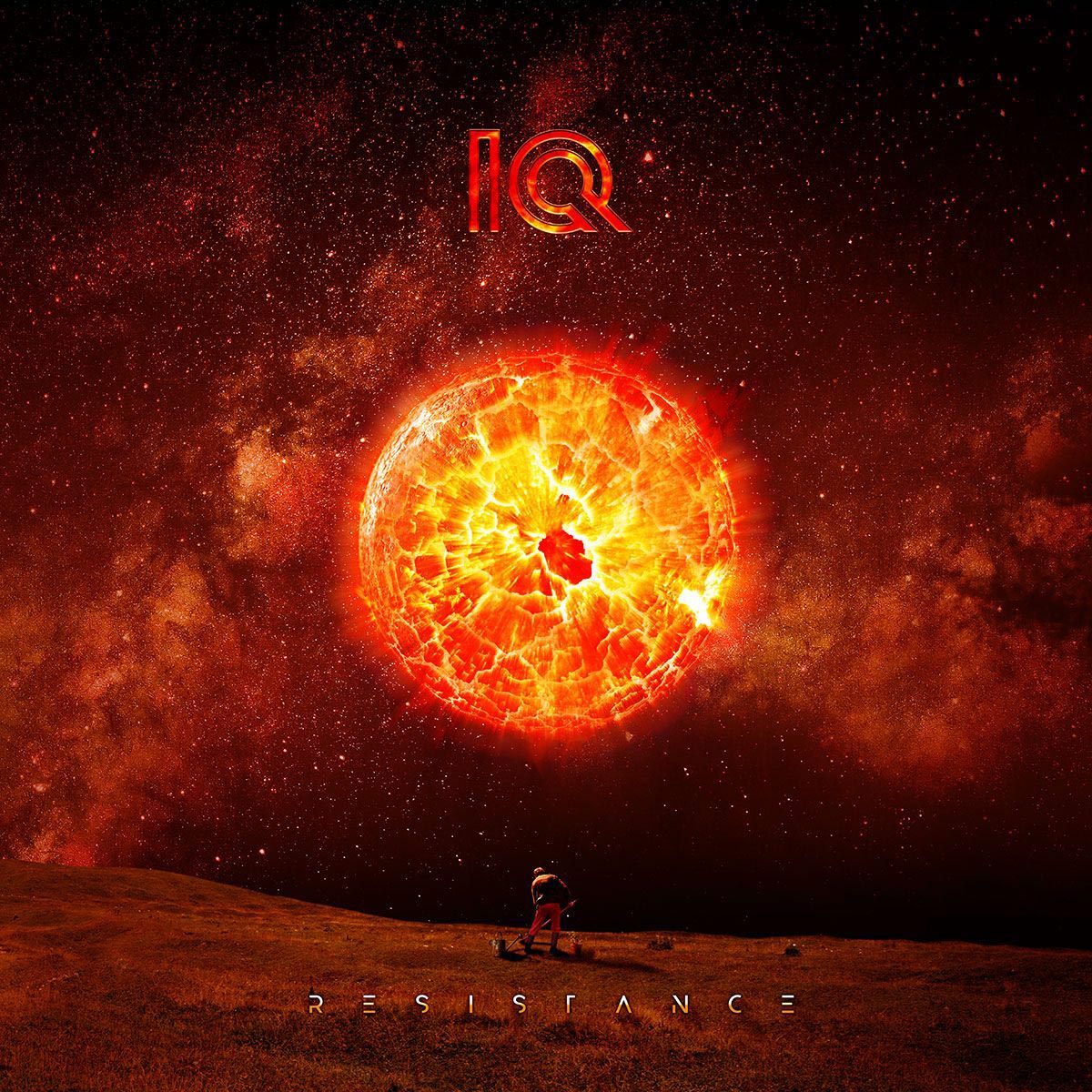 On the brink between neo-prog and progressive metal, the two openers already showcase Peter Nicholls’ unique vocals, Paul Cook’s pounding drums and the overall dark wall-of-sound that has become characteristic for IQ since “Frequency”. While Michael Holmes’ guitar is taking center-stage at first, a lot of the sinister atmosphere is actually created by keyboard player Neil Durant. Using a huge arsenal of sounds from squeaky synthesizers and roaring 70s Hammond organ to apocalyptic mellotron choirs, Durant easily manages to fill the big shoes of longtime member Martin Orford. His impact was already distinguishable on the band’s previous release, but I’d go as far as to name him the star of this album.

The first half of “Stay Down” gives the listener a much needed opportunity to catch their breath, as it gives the impression of being a ballad. It quickly segues into an apocalyptic second half, making it a perfect example for seamless transitions between completely different atmospheres. “Alampandria” is a coda to “Stay Down”, featuring middle-eastern influenced harmonic material, heavily layered keyboard sounds, as well as a church organ and an “Apocalypse in 9/8”-like groove. Nicholls’ vocals are particularly strong towards the finale of this twelve-minute two-part suite.

The atmospheric, Floydish “Shallow Bay” and the ballad of the album, “If Anything”, tone down the heaviness a little. The former returns to the symphonic sound of the band’s 90s albums and features one of the greatest guitar solos in IQ’s catalogue. The whole song seems to lead up to Michael Holmes’ outburst of soaring, distorted guitar. The only constant member of the band, Holmes rarely shows what he’s capable of. But when he does, it’s always worth the wait. “If Anything” features a drum machine reminiscent of early 90s ballads by Genesis (e.g. “Hold On My Heart”). IQ is not one of those bands where every ballad drowns in corny, sugary euphony, as evident during the rhythmically far more interesting “Ocean” off the band’s previous release. Still, “If Anything” might be the weakest song on “Resistance”, though it concludes with a surprisingly dark finale.

IQ are well known for composing songs above the ten minute mark, as every one their albums since “Ever” features at least one of such epic. The oversized “Resistance”contains three of these lengthy songs, which should make every prog-fan’s heart sing. “For Another Lifetime” starts with a fanfare/carnival-like waltz which creates a unique atmosphere that is constantly oscillating between cheerful and eerie. The song follows a linear structure, meaning there are not many themes are revisited. This approach is hard to execute, but the band’s 2009 masterpiece “The Province” has shown that they can pull it off. Still, “For Another Lifetime” meanders its way through different parts, moods and paces, becoming more and more dramatic and suspenseful, ultimately culminating in a majestic finale.

The longest track on “Resistance”, “The Great Spirit Way”, sees the band pursuing direction which is distinct from any of their previous 20-minute+ songs. Energy and suspense are already on a high level once Peter Nicholls starts singing around the three minute mark. The rhythm section is on fire on this one, and are a lot more in the foreground than in most of IQ’s arrangements. The vast, dramatic organ and mellotron by Durant as well as Nicholls’ vocals hover above the complex staccato kicks by Paul Cook and Tim Esau, forming a perfect symbiosis and creating an impulsive, almost hectic vibe – fantastic! There really are no distinctive parts in this song. Every minute flows into the next one perfectly, truly making the track one big composition instead of five or six small ones strung together.

It is nearly impossible to keep up the suspense after this rollercoaster ride, and so it’s understandable that the guys take things down a notch with the two following songs. After all, we’ve just worked our way through 75 minutes of IQ-extravaganza. “Fire And Security” is very reminiscent of the shorter cuts on 2004’s “Dark Matter”, equipped with another soaring signature-Holmes guitar solo, while “Perfect Space” manages to combine floating, melancholic verses featuring jazzy ride cymbal work with a harsh chorus and symphonic instrumental breakdowns. These two songs might easily be overlooked as they are wedged between the two 20 minute monsters, but they are just as strong as every track off the first disc, if not stronger than quite a few of them.

The final cut “Fallout” features everything an IQ fan could wish for. Its ambient introduction even wakes up memories of “The Last Human Gateway”, creating a peaceful atmosphere, before cleverly morphing into something darker. Once again, this 20-minute track is not just a collection of independent shorter songs, but a single composition with every part transitioning perfectly into the other. “Fallout” effortlessly walks through wailing guitar solos, apocalyptic, drum-driven instrumental interludes and classically influenced piano solos, as if it was the easiest thing to combine all these elements into one consequential song. It concludes the album without any pompousness, but remains slightly majestic, not unlike Yes’ “The Gates Of Delirium”.

“Resistance” is IQ’s darkest, heaviest album to date. Not every song includes an anthemic chorus, not every melody is instantly recognizable and not every track has a happy ending. Still, every IQ fan should get enough of the band’s characteristic, symphonic sound. Albums that span two CDs might be a red flag for many fans of progressive rock, having been disappointed many times by announcements of opulent, oversized masterpieces. But the classy, always down-to-earth IQ have not started working on “Resistance” bragging about creating the ultimate masterwork of the genre. Sketches seem to have been designed and further developed into songs without any bias and forced directions. This great ensemble of musicians have gained enough experience to know when a composition has matured into something worth releasing.

Almost 40 years into their careers, the guys from IQ are not standing still. While not reinventing the genre, the band are consequently expanding their sound into more sinister, heavier territories. Never have they sounded more rigorous, precise and consequent. Nicholls’ timeless voice, Holmes’ highly underrated guitar work and the multilayered, tightly intertwined rhythmical foundations by Cook and Esau are as present as ever. The whole thing is complemented by the vast variety of keyboard sounds that Durant has scattered all over the album, as well as a top notch wall-of-sound production. I’m not sure if I know a better IQ-album.