Having already turned heads with their all-star lineup and intense singles, Imonolith has generated a following eagerly awaiting their debut album “State of Being.” Drummer Ryan Van Poederooyen and guitarist Brian Waddell, both of the Devin Townsend Project, founded Imonolith in early 2018. There is no question that these artists were inspired by their mutual background in the Devin Townsend Project, but there is also certainty that Imonolith has emerged with a sound entirely apart.

Metal through-and-through, “State of Being” is built on a backbone of pure heaviness, hard-hitting riffs and irresistible hooks which keep the album burning at high intensity from start to finish. More than just heavy, Imonolith has managed to make an album that captures the listener and engages their emotions, pulling them from their surroundings and entirely into the music. With Jon Howard of Threat Signal on vocals, this supergroup has the angsty kick of an early 2000s alternative rock band, occasionally disconnecting from the chugging bass that gives the album its roots.

Production appears to be one of the top concerns for Imonolith, most apparent in the highly polished single “Hollow,” which serves as the conclusion for “State of Being.” A cocktail of anger and burning energy, “Hollow” features a combination of throaty growls between crisp riffs and a higher pitch of Howard’s clean vocals. This is one song where the grittiness of the instrumental undertone matches well with the somewhat monotone vocal inflection, with Waddell and Scott Whalen shifting the song’s atmosphere in a more dynamic fashion than some of the album’s earlier tracks. Such a combination occasionally leads to more repetitive songs which fail to entirely pierce more nuanced emotional appeals, such as “Forgone.” Aside from thundering along heavily, particularly with a gravelly drum fueling some dissonant apathy, the song remains particularly one-dimensional.

Even when the album falters in the delivery of its lyrical message, “State of Being” maintains a comfortable pace throughout, varying the tempo and texture between songs with much more skill than within them. As a relatively straightforward heavy metal project, Imonolith has lost some of the progressive tendencies of its founding members, but their expertise in crafting a continuous work of music proves that they are still at the top of their game. From the imploring hook which opens “State of Being” through the conclusive fury of “Hollow,” the natural and very human storytelling that ties together “State of Being” persists rather effortlessly. It is a rhythm which allows listeners to remain committed to the album’s vision even when the drive of a given song fails to lure them in. 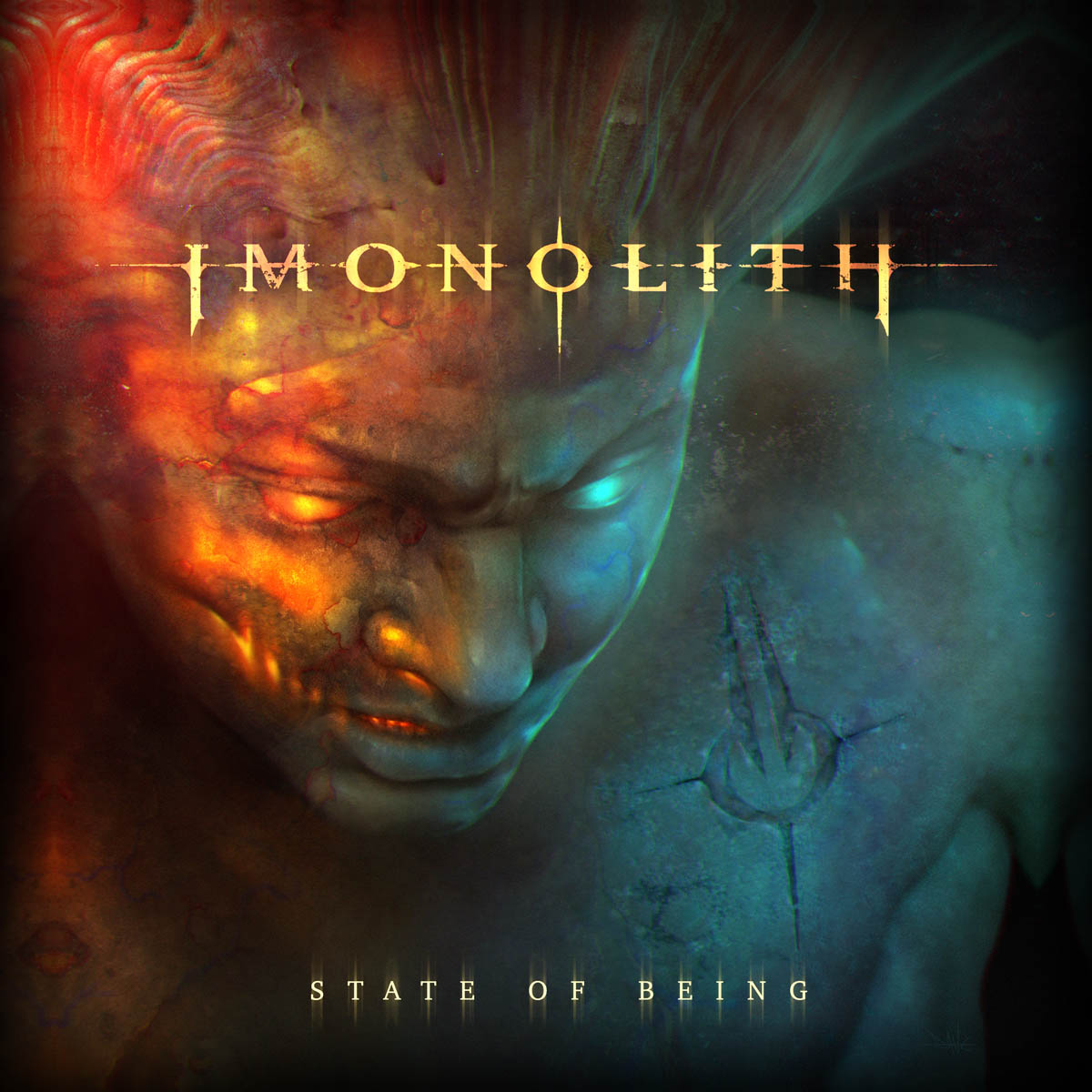 “State of Being” Album Artwork

“Breathe” is one such track that allows listeners to do the same: take a breath of fresh air in a much-needed interlude. More of a steady jog than a charging succession of punches, “Breathe” is proof that Imonolith is capable of both restraint and versatility outside of their main gimmick of unstoppable riffs that threaten to melt steel. Whalen’s bass does a fair deal of heavy lifting on the album, given a bold position with clarity in the mix despite sharing the instrumental arena with two dexterous guitarists. In an album where aggression and a steady heartbeat seem to be of the utmost concern, the balance of the mix is more than appropriate, with the exception of some moments where a vocal-led passage seems to mute a riff that deserves center stage.

Van Poederooyen and Waddell are two talented musicians of a similar history that sought to form a project that sounds entirely separate from their past. However, in running from their past identities, they seem to have chased a sound that brings them closer to the sum of everyone else in the heavy metal scene. The riffs are heavy, the songwriting is sound, and the production is undoubtedly the work of professionals with a concrete vision for an album that does not show a moment of weakness. Despite the many strengths of this supergroup, it’s clear that they still have room to forge their own identity and work through the misanthropic aggression that clouds a more precise final product. Splintering between the amateur youthful aggression and the serious attention paid to songwriting and composition, Imonolith show promise and commitment with a first release that will certainly garner a fair amount of attention.

“State of Being” Track-listing:

Stuffed to the brim with heavy riffs and a taste of youthful aggression, this supergroup takes a clear path away from their respective histories to forge new ground and a unique musical identity. Though their first steps show that they have room to push forth with new confidence, “State of Being” is an engaging look at the creative energies of talented musicians unafraid to try something new.