The year 1932 saw a young and brilliant Texan by the name of Robert E. Howard, still a fledgling author in the budding world of fantasy pulp fiction, create a fantastic world someplace between Viking culture, the Mongol Horde, and ancient Persia. He called this era, in this place, the Hyborian Age. In it, there lived a strapping young lad, not named Devin, but Conan. A barbarian, destroyer, conqueror, reaver, and eventually king upon a throne of blood and bones.

Now, in March of the year 2020, after the tragic premature passing of Robert E. Howard, after his works, and after the movies, after Arnold and even after Brigitte Nielsen, there comes to us a trilogy, not in D minor, and definitely not about a love pump, but definitely about Howard’s Hyborian Age. The metal band is, in fact, called Hyborian, and March 2020 brings a sequel, the second in the band’s concept trilogy about an extraordinary supernatural otherworldly being known simply as “The Traveler,” who travels space and time, as a sort of intergalactic chronicler, imparting upon humanity his lessons and his history of the cosmos.

Those of you expecting an Arjen-and-keyboards powered adventure through space and time may need to modulate your expectations, because Hyborian “II” is actually a stripped-down, gritty sludgy metal assault on the senses. Imagine the fire and the fury of old-school Trivium married to some of the doomier sludgier sounds of Corrosion of Conformity. That maybe, sort of, scratches the surface of the Hyborian sound. It was five years ago that the Midwest saw the emergence of Martin Bush on guitars and vocals, Ryan Bates on guitars, vocals, and bass, and Justin Rippeto on drums. Although the heavy metal rat rod they have created is rough and raw, there is no question it is real metal, and rather enjoyable.

For how much time and thought went into the lyrics and song structure of the album, the vocals are all but howled into our faces, and we certainly hope Martin and Ryan are not shredding their vocal cords beyond repair. The good news is, even if they are, it’s their loss and our gain, because it only aids the raw brutality of the record. Instrumentally, it is clearly a fusion of two (or more) guitar tracks, sometimes slamming away power cords, but very often harmonizing with melodic parts a la Maiden and Iced Earth. The writing is a slight departure from the old-school thrashy rhythm bits eventually making way for a face-melting guitar solo or two. Don’t get us wrong, we have a lifelong love affair with that formula, but this is cool too. Hyborian focuses on layers of rhythm and harmonies so that it is thrashy without being non-melodic. 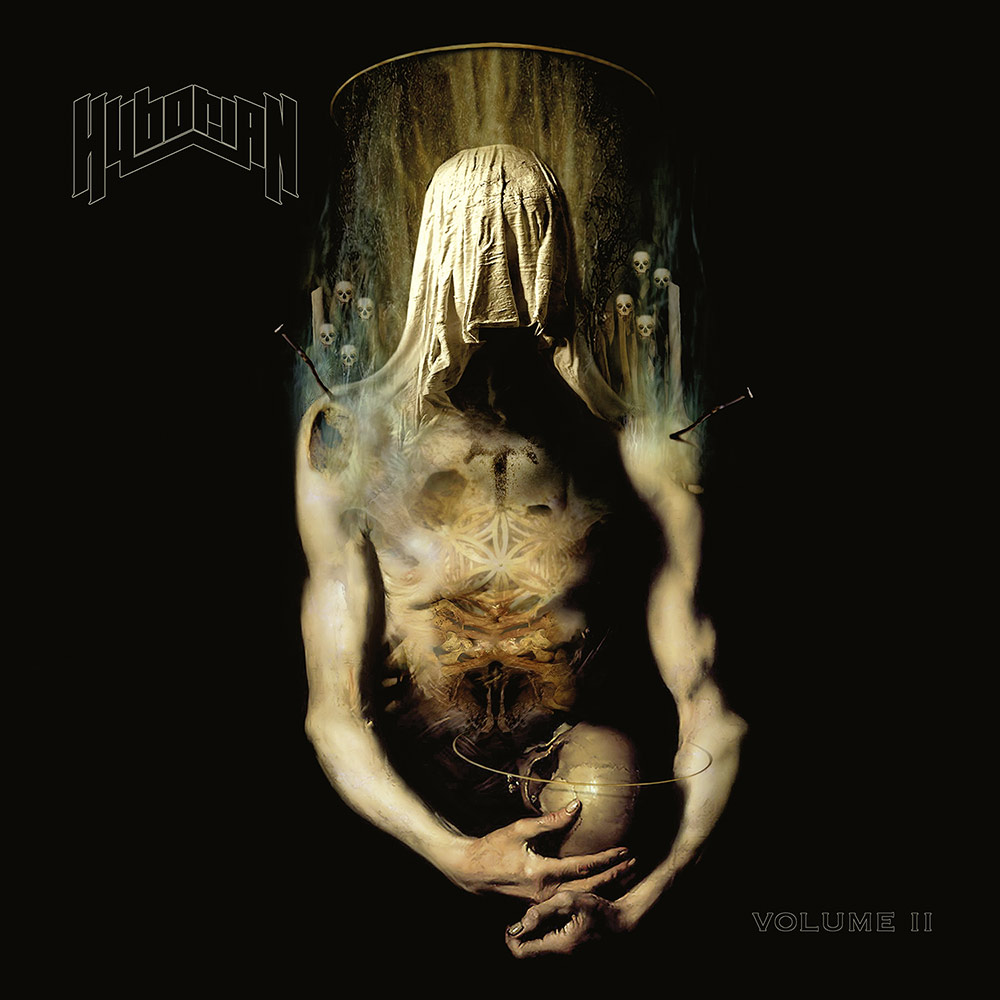 The album opener “Driven by Hunger,” is built over a head nodding shuffler of a guitar riff and a power chord driven chorus dynamically injected by overlapping dual voices, and highlights the liveliness of Justin Rippeto’s drumming, which remains a constant through the whole record. Tracks like “Stormbound” and “Sanctuary” engage colossal lurching chord progressions and vintage Hetfield-esque palm muting and down picking in their gnarlier guitar tones, and the riffing lends itself constantly to natural head-banging. And then there’s “Expanse,” a rampant tune with memorable melodies, sophisticated guitar work and audacious vocal harmonies. These guys definitely showcase the talent to conceive quite the succulent musical mixture, with bits of psych, stoner, doom, and prog-rock thrown together into their precise recipe.

Although the first record seemed primarily concerned with the world of Conan, and this album is the tale of Howard’s inter-dimensional “Traveler,” it will be interesting to see how Hyborian rounds out the trilogy in a couple years. Their stock in trade may not be the cup of tea for every metal-head out there, but they deserve credit for sculpting a sound which is by-and-large their own. If they are playing your town, should you go? Not just yes but, HELL YES. A band like this must absolutely crush it live, and be an unbridled metal massacre. The new album, “Volume II”, lands on March 20, and you can get it from the band here or from your usual online/local retailer of choice.

1. Driven by Hunger
2. Stormbound
3. Sanctuary
4. Planet Destructor
5. The Entity
6. Expanse
7. Portal
8. In the Hall of the Travellers

The savage metal barbarians of Hyborian have done it again. This album is down, dirty, heavy, and unapologetically gets in your face and just doesn’t care. Fans of everything from Testament to Amon Amarth will find good times here. Definitely give it a listen, and let us know what you think.