More than just falsettos and fantasy quests, the grit from power metal’s origins fearlessly persists into the present day with darker strains peering through shining swords. Debuting with an album that digs into the same stylistic vein of Judas Priest is Germany’s Goblins Blade, presenting a strong vocal lead on top of reliable rhythm sections that give exciting variety to the balance of good and evil. “Of Angels and Snakes” includes a wide range of tempos and catchy choruses which craft an instantly accessible appeal for fans of old-school metal and modern power metal alike. Solos weave throughout the album effortlessly and in excellent taste, offsetting the slower crawl of certain verses against the emotional choruses built out by two guitarists and a faithful ear for instrumental brilliance alongside thematic darkness.

The quintet may take a vocal focus throughout “Of Angels and Snakes,” but that is not to deny the talented musicianship which provides vocalist Florian Reimann such a strong foundation. Using guitars in the hands of Jorg Knittel and Claudio Enzler, lightning-fast rhythm work backs the most rousing choruses of the album, including that of the unstoppable “Blink of an Eye.” Their versatility is further expanded in the excitement maintained in the slower tracks of the album, including the tempered solos in “The Bell is Broken” which compliment the overall darkness portrayed across the song. In matching not just the vocal execution of the songs, but their atmospheric intent as “Of Angels and Snakes” explores the peaks of good and evil, both Knittel and Enzler are the essential keys to the sound Goblins Blade has thus far established. Fleeting moments of brightness in the riffs that fill the space between verses or lead listeners over the hard-hitting bridges give “Of Angels and Snakes” a balanced chemistry without straying towards the overly gratuitous. 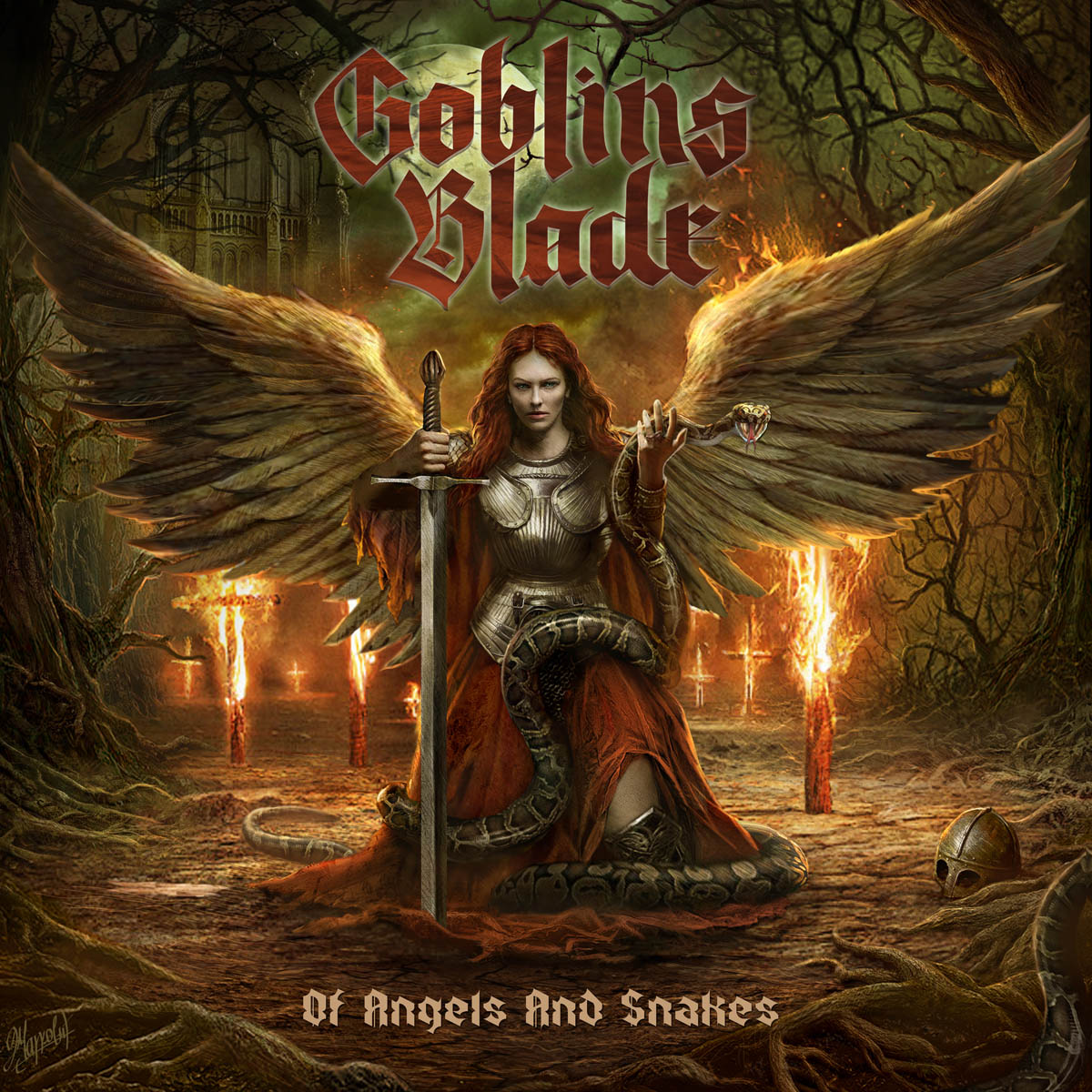 “Of Angels And Snakes” Album Artwork

Rather than using speed as a crutch for an enticing sound, “Of Angels and Snakes” sees its opening tracks march slowly and surely rather than immediately lighting the fires that some see as a given for the genre. “Snakes From Above” makes for an interesting opening track given its more stripped-back presentation compared to the album’s longest and most engaging song “When the Night Follows the Day,” though both follow one another in similar tempo and atmosphere. “When the Night Follows the Day” gives drummer Claudio Sisto a chance to breathe and showcase his skills, whereas “Fall Into Darkness” buries the drums far back in the mix compared to the rest of the instrumental cast. The final balance gives fair opportunity to the vocals and guitars to take center stage in their rightful brilliance, but seems to suffocate either the drums or bass rather than allowing both to shine alongside one another. “When the Night Follows the Day” is one such demonstration of Sisto being an irreplaceable part of the charisma behind Goblins Blade, both in reliability and how complementary the execution of the percussion remains alongside Reimann’s raspiness.

Concern of percussion aside, the main drawback in “Of Angels and Snakes” is the occasional repetitive nature of tracks that follow in the same structure as opener “Snakes From Above.” The slower and more aggressive touches give Goblins Blade the edge that carries their identity, but songs drawn out for longer than five minutes and reiterations on the same themes can grow tiring on repeated listens. However, the placement of the tracks which lean into speed and brightness with an eager flourish are placed at perfect points across “Of Angels and Snakes,” making the overall listening experience balanced from start to finish. Carried from chorus to chorus with obvious enthusiasm for their art, Goblins Blade have done dutiful homage to the early foundations of power metal and fully embraced the darker side of a genre that is rarely seen without its blinding light.

“Of Angels And Snakes” Track-listing:

Harnessing the conflict between good and evil, Goblins Blade digs deep in the darker shadows of power metal to offer the grittiness of old-school acts with touches of modern brightness. “Of Angels And Snakes” is carried by enthusiastic choruses and a strong vocal presence that allows the album to balance an ominous atmosphere with its epic proportions.