What a testament to the genre of progressive rock that several bands are actually starting to reach their 50th Anniversaries. Getting their start in 1969 and releasing their debut album in 1971, Germany’s Eloy have reached that estimable category as they release their 20th studio album. That longevity usually comes with a price, including multiple lineup changes such that those left standing at the 50th anniversary have likely not been along for the ride during the entire journey. In Eloy’s case, although most of the members have been in the band for a good stretch of time, it is main man Frank Bornemann who has carried the torch all these years, so it seems fitting that “The Vision, The Sword and The Pyre” has been completely under his direction, and is a project that has consumed him for the past four years. A rock opera of sorts, focusing on the story of Joan of Arc, Bornemann has worked tirelessly to bring his measured rendition to life, and he has met with considerable success. Part I was favorably received in 2017 and now two years later Part II makes its way to listener’s ears. Bornemann has striven to provide historical accuracy of his portrayal, not a dramatization. He received support from the Centre Jeanne d’Arc in Orléans to ensure that he offered an authentic and complete portrayal of the events “which are entirely true and historically proven”.

Needless to say, “The Vision, The Sword and The Pyre – Part II” is probably not the best entry point for any newcomers to Eloy. For that, traveling back a few years to the “Reincarnation on Stage” live double album is an optimal way to experience the many stages of the band in one go. But for the fans who enjoyed “The Vision, The Sword and The Pyre – Part I” and have been looking forward to its conclusion, Part II should satisfy. Both parts employ the sounds familiar to Eloy’s style, but this is more of a dramatic plot with vocal storytelling, which distinguishes it from most of the other albums in the band’s catalog. There are even a few passages that are more spoken word narration than sung vocals, but still accompanied by engaging music in the background. Although Bornemann is the lead vocalist, additional choirs and guest vocalists add to the sonic diversity, as well as the feeling of this being a stage production. Indeed, there may be plans to bring this work to the stage in an epic presentation if all of the details can be worked out. 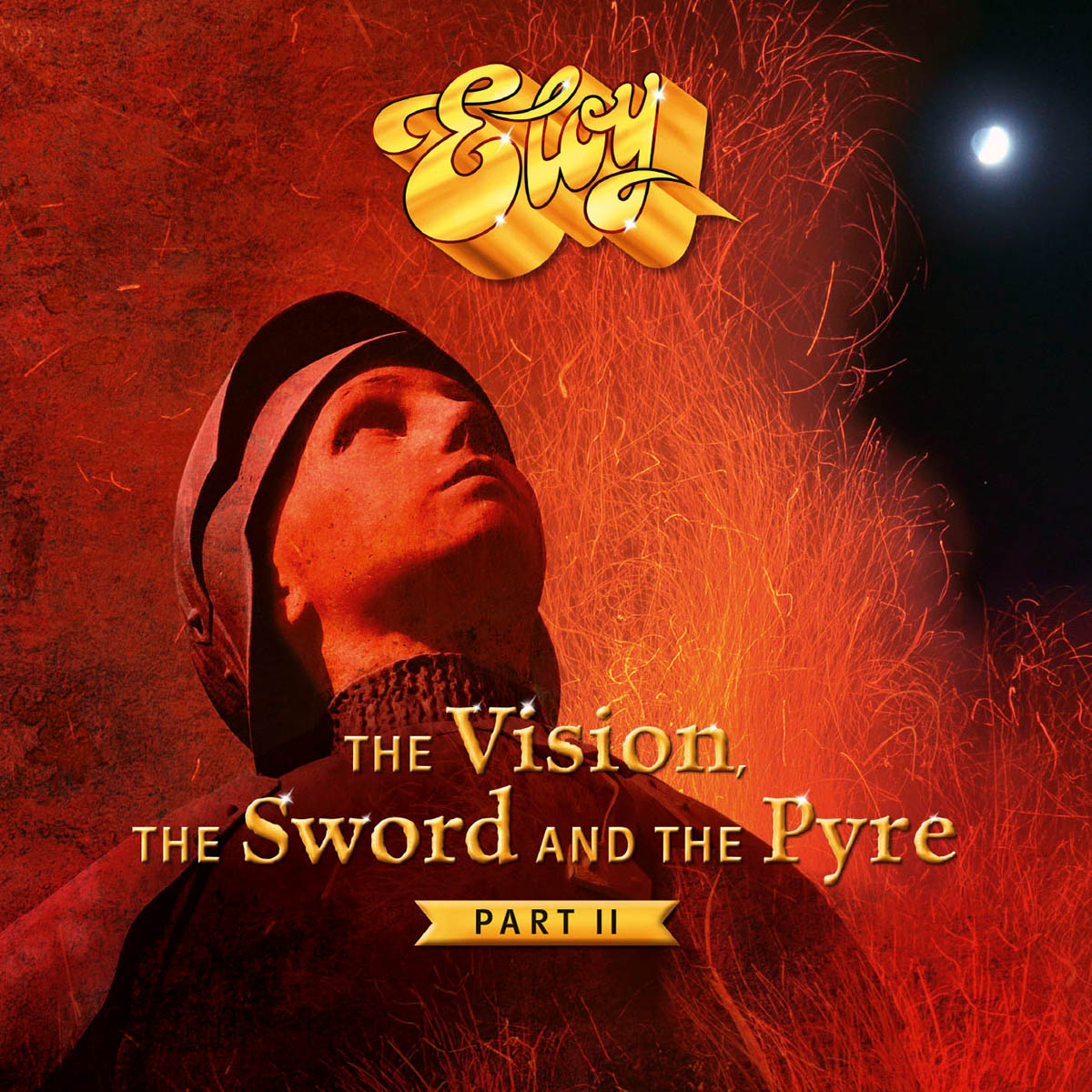 “The Vision, The Sword and The Pyre – Part II” Album Artwork

As the title implies, “An Instant Of Relief…still The War Rages On” opens the album softly with lovely angelic vocals until the rhythm of war picks up the pace, provided by new drummer Stephan Emig. The rest of the band has been on board for a good portion of Eloy’s history, so there is a solid group cohesion even though much of the recording had to be done in stages since members live further apart than in earlier days. “Patay” and “Joy” are two of the most successful songs where the band’s performance and the storytelling coalesce, the keyboards of Hannes Folberth and Michael Gerlach being equally important to Bornemann’s guitar and vocals. Other tracks are shorter in length, like “Reims” and “Resume”, which add to the breadth of the  concept but slow down the overall momentum, especially the spoken word passage. Still, there is plenty more fire in the story and the band respond accordingly in “Paris” and “Armistice or War”.

By the time the story reaches its conclusion with grand church organ and choirs in “Rouen”, Eloy has proven its ability to convey history through the medium of progressive rock. It seems appropriate that the listener is left to drift off with final track “Eternity” and indeed this guitar riff and groove could have continued much longer with more instrumentation at the end, such is the beauty of it. Bornemann deserves recognition for his dedication to seeing this project through, over many years of arranging Parts I and II. It’s an interesting choice to have made at this late point in their career, after completing the triumphant live “Reincarnation” album…a choice which many bands would not have embarked upon. Ultimately, it is a worthy chapter to be added to such a long and varied history.

“The Vision, The Sword and The Pyre – Part II” Track-listing:

Eloy completes their ambitious historical account of Joan of Arc through the medium of progressive rock. Following the release of Part 1 in 2017, this concluding volume continues along the lines of a rock opera approach, making for an impressive achievement nearly 50 years after the band’s initial formation