The epic battle of Murray and Evil revisited.

More than a decade since one of the founding fathers of heavy metal departed this world to take his place among the legends, Ronnie James Dio’s legacy as a prognosticator of all things metallic and fantastical, remains without question. However, for those of us whom predate the millennial generation, there was a time where this mighty teller of tales was considered persona non grata in the very nation that birthed him, as the nihilistic wave of grunge that swept in with the 1990s made no distinctions between the teased hair craze of Poison and Nelson and the original, hard-hitting heavy metal that originally kicked off the 1980s. The same fearless metal crusader that was filling arenas and doing battle with a mechanical dragon in the mid-80s found himself struggling to fill moderate sized clubs, despite the darker tone that would be struck by the harrowing anthems of “Strange Highways” and the sludge-infused, progressive experimentation of “Angry Machines.” Metal itself seemed to be in the proverbial wilderness insofar as the continental United States was concerned, with Ronnie James as its steadfast prophet continuing to preach the creeds of old.

But times were destined for a needed change, and shortly after the close of the 90s the once fallen star found itself shining brightly in the sky once more. Though a highly ambitious conceptual offering with symphonic trimmings dubbed Magica would signal a needed return to form for this outfit, it was the 2002 follow up “Killing The Dragon” that truly rekindled the old flame in the eyes of the public, hearkening back stylistically to the commercial heyday of the band when Vivian Campbell was rocking the six-string. Despite bassist Jimmy Bain being the only other original member in congress from said era, the brilliant emulation of Campbell’s agitated shredding style and busy riffing by the newly acquired Doug Aldrich made Dio’s 9th studio LP the quintessential piece of 80s revivalism graced by a few modern touches to reawaken the sleeping masses to what they had been missing for the past decade. Given the tone that was thus struck, it stood to reason that an accompanying live release marking this era of revitalization was in order, and a beast of one was accomplished in the closing weeks of 2002 in “Evil Or Divine: Live In New York City.” 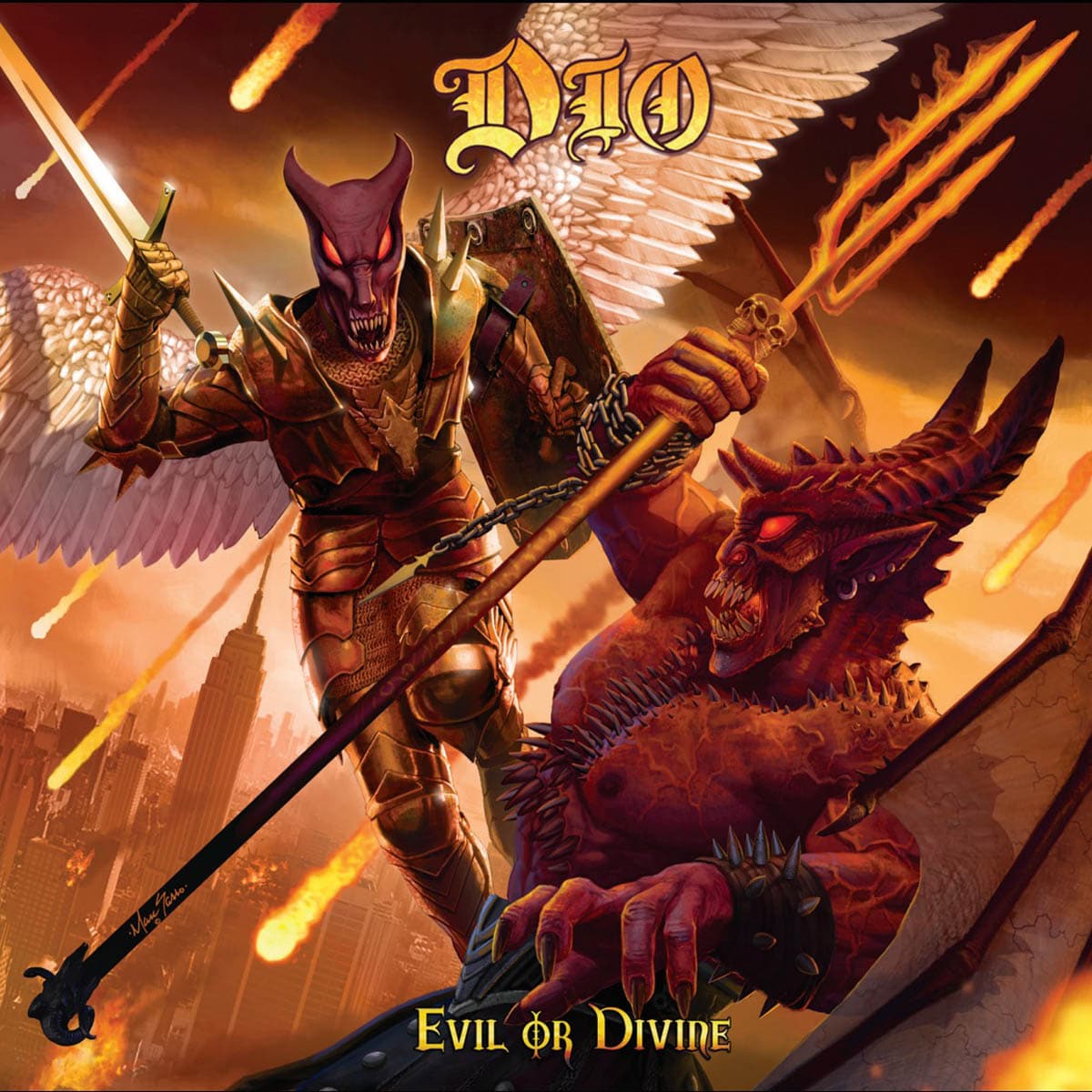 The aforementioned extravaganza that was first offered up to the masses in the visual medium in 2003 has been given a fresh new packaging, complete with an epic depiction of long-time mascot Murray donning angel wings and doing battle with the prince of darkness himself. However, the true prize is to be found in the game of notes found within, chronicling the most epic performance ever given by an elder statesman of the metal nations in his early 60s. The tempo of things is generally fast and flashy, spearheaded by an assortment of swift numbers, the lion’s share of which being from Dio’s seminal LPs “Holy Diver” and “The Last In Line,” with “Killing The Dragon” ranking a close third. Blistering fits of high octane splendor such as “Stand Up And Shout”, “Don’t Talk To Strangers” and closing cruiser “We Rock” bring home the intensity like it’s going out of style, blurring the lines between the old school sound and its somewhat younger speed metal cousin. Even more moderately paced rockers such as “Rainbow In The Dark” and “Holy Diver” come off as speed-happy given Aldrich’s and drummer Simon Wright’s highly animated performances.

The tempo factor is not alone in showcasing the band’s efforts in turning back the clock just under 20 years, as the entire structure of the set itself caters heavily to the practices that were commonplace in Dio’s performances during the mid-1980s. The practice of combining similar songs into medley performances sees a fairly unique coupling with the doom-leaning yet Rainbow-inspired “Egypt (The Chains Are On)” and the pounding mid-paced Black Sabbath epic “Children Of The Sea”, while audience participation reaches its peak during the obligatory extended jam version of “Heaven And Hell”, though interestingly Dio opts to break with their 80s practice of omitting the up tempo closing section of the songs to truly climactic results. In fact, the only time where this performance totally falls into mid-80s orthodoxy is the rendition of “Man On The Silver Mountain”, which is played at a much faster tempo relative to its original studio version after the same fashion that both Vivian Campbell and Craig Goldie had performed it during their first respective runs with the band. 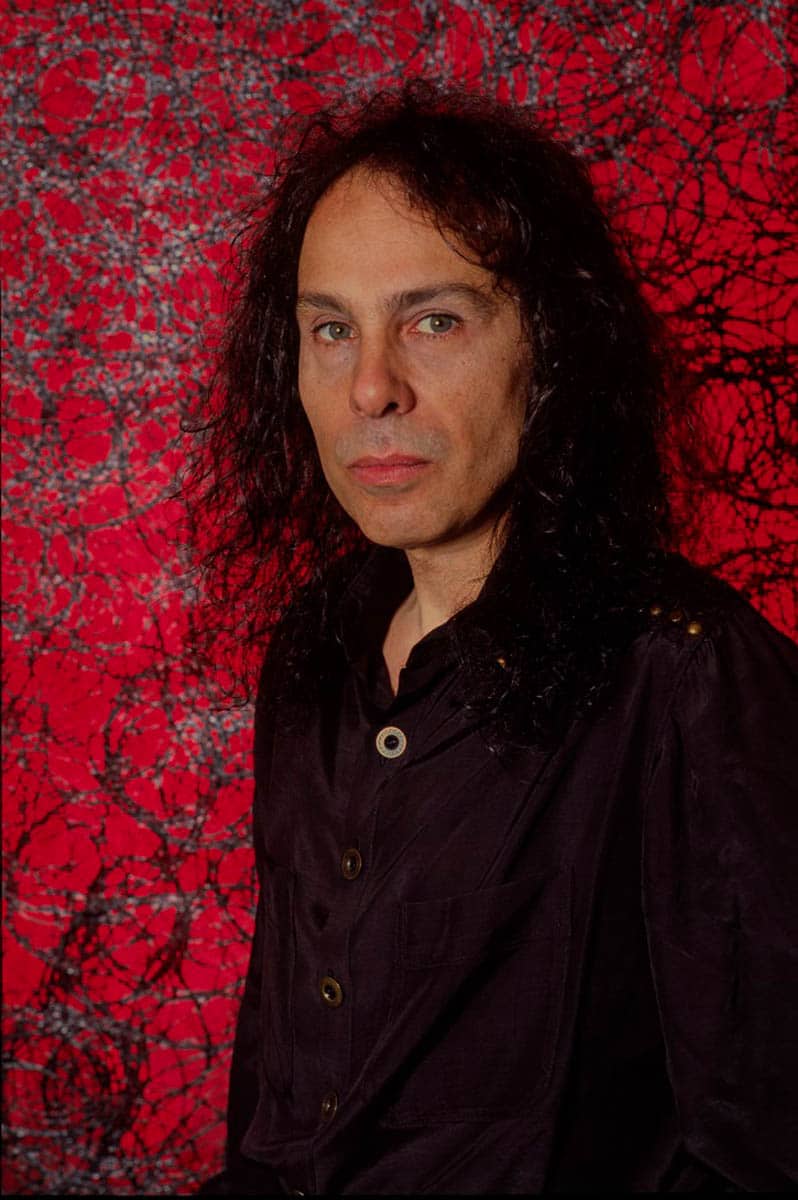 Though no moment during this magical undertaking can really be overstated, it’s difficult to avoid obsessing over the massive array of talent that is exhibited between the instrumentalists involved here. Following the mid-paced banger and radio hit off “Killing The Dragon” “Push”, former AC/DC drummer Simon Wright delivers a truly astounding drum solo performance, which also sees him cycling through a few moments of symphonic pomp in the background to showcase his ability to blend his frenzied fills and bombastic hits in with an organized, consonant backdrop. Similarly, the wild technical brilliance on display during Doug Aldrich’s guitar solo break following “Man On The Silver Mountain” revivals the sonic mayhem that Craig Goldie trotted out during the Sacred Heart tour back in ’86, cycling through multiple stylistic tropes while also making way for keyboardist Scott Warren to show his skills at playing Jon Lord to Aldrich’s Blackmore on steroids. The only member of the fold whom seems content to play the support role is Jimmy Bain, but his contributions to the arrangement are highly noticeable despite the lack of overt virtuosity.

All that being as it may, this was Ronnie James Dio’s hour of brilliance, and he delivered at every possible moment. While some may deride him as being the Mariah Carey of heavy metal given his propensity to highly embellish his own vocal lines and also ad lib streams of notes during the finales of every song, each little modification that he brings to the table proves more than fitting and further reveals a man that was fully tapped into the energy being sent to the stage by the audience and forthwith in projecting it back outward. The raw talent and energy on display is tempered by an earnest intent to put on the best show possible for all in attendance, and is always chased by a barrage of gratitude in the most down to earth fashion. It all culminates in one of the most poignant moments in metal history where a once battered and beaten hero has been given his long overdue welcome back into the festive hall that he once called home. It’s a bittersweet homecoming as said metal champion has been gone from our midst for over 10 years, but a lasting testament to a genius who laid the foundations for the music that we all love.

Re-mastered for metal posterity’s sake, the concert that saw The Man On The Silver Mountain’s rebirth as an arena favorite west of the Atlantic has been brought forth in all its blazing glory, showcasing why the man became a legend long before he departed this world.