Mike Slamer remains one of the unsung and criminally underestimated guitar heroes of rock. Much like fellow peers Michael Lee Firkins and Reb Beach, he is one of those guys with amazing chops, touching all sorts of work over the course of a career and never quite realizing the credit they deserve. He has been the guy behind some of the most amazing melodic hard rock releases of the past 20 years. The list includes, but is not limited to, Steelhouse Lane, Seventh Key, Slamer, and Terry Brock, and we can’t forget his work in the 80’s with Streets (featuring Kansas singer Steve Walsh) and the 70’s with City Boy.

His new project, the Devil’s Hand, looks to rectify that injustice. Teaming up with Andrew Freeman of Last in Line fame, the album is a melodic AOR hard rock journey, with a broad breadth of impressive jams. Although the band certainly has a new sound entirely its own, the album is arranged with a healthy variety of tracks that approach all the best angles of rock’n’roll’s golden age.

The album kicks in with a nice teaser in the form of “We Come Alive,” a guitar-centric pop rock anthem providing a healthy icebreaking warmup for the album to come. The track blends tasty guitar execution, medium-to-hard riffing, and an endearing melodic chorus. With the listener adequately ready to rock, the album serves up the single material du jour, by way of “Falling In,” a straightforward hard rocker with very nice harmonies, melodies, and change-ups. It would be tempting to invoke Def Leppard, but even that misses the mark, since the track blends enough classic and modern elements to be something new and tasty.

On occasions, the album goes a bit unplugged cowboy a la Bon Jovi, to alternate the strumming and slide guitar with some big nasty high gain stuff, and the third track “One More Time” is one such occasion. This one actually really grew on us. After a few listens to the whole album, this is one of the ones where you say “Alright!” when the first steel string acoustic chords come in.

Much like Journey‘s Escape, just when you think you had it all figured out, Mike Slamer comes out of nowhere with some killer EVH riffage. Yes, the licks are sweet, and bordering right on the “brown sound,” but the song composition is fresh and fairly unique to Devil’s Hand, especially the larger than life buildup to the chorus: “Another Way to Fly.” However, Slamer is unrelenting of surprising us all with his bag of tricks. The guitar solo is absolutely masterful, delivering the very best of 80s technique, tapping, harmonics and all. Just when that track is done leaving the listener breathless, “Drive Away” comes hammering in with some furious riffs, but then wastes no time unleashing some very cool choruses. The guitar leads in the middle of the track are like some wicked fun thing that never quite made it onto Flying in a Blue Dream. 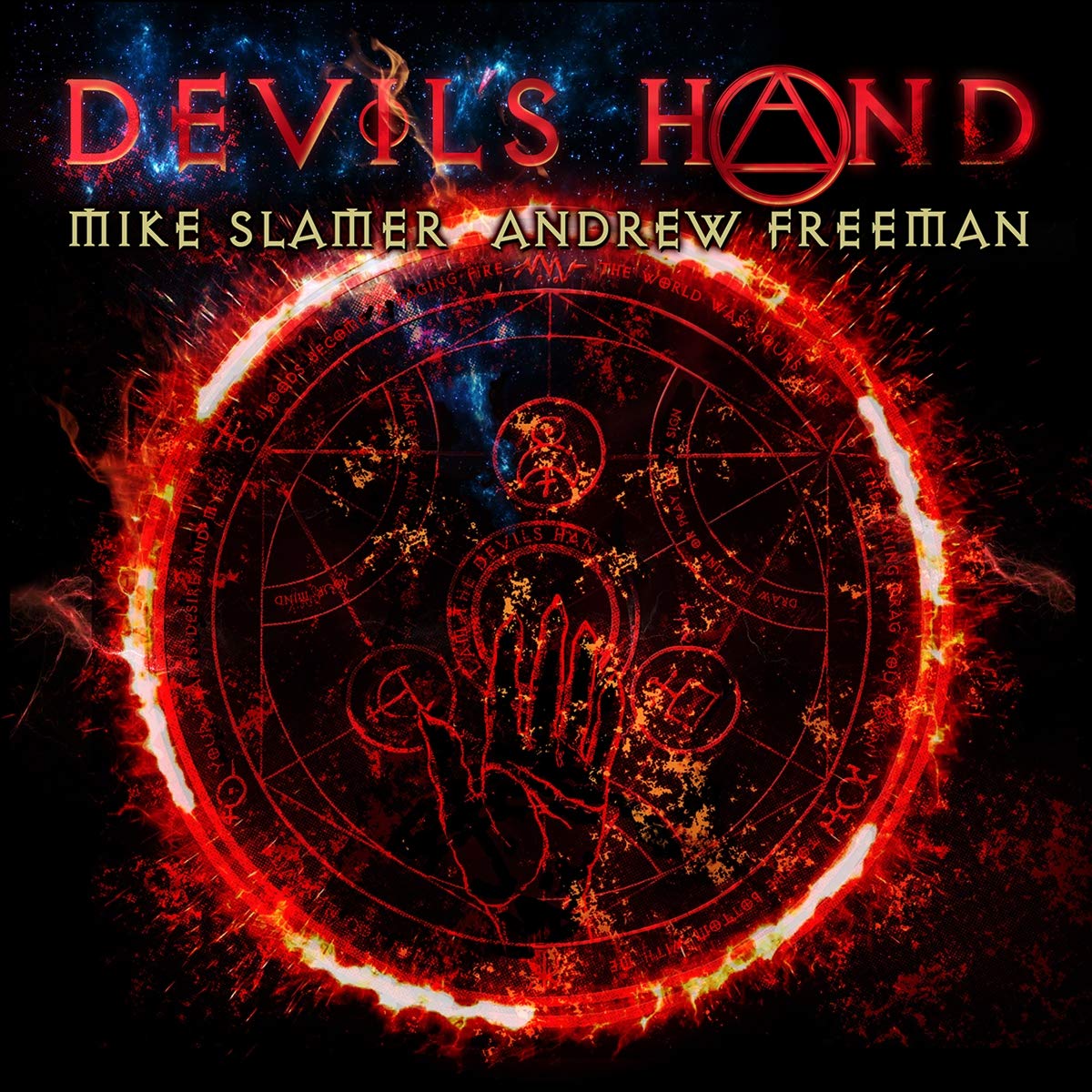 After two high-energy hard-hitters in a row, the album hears you, and finds your concerns “Justified.” No, the song is not about Deputy U.S. Marshals in the beautiful hills of Eastern Kentucky, but damn if it couldn’t have been used to close out a season finale. The song is essentially unplugged, and the only electric guitars leads keep the gain knob to a level that is friendly to the neighbors. This may also be another almost hidden and underappreciated gem of this album. Yes, it’s just a straightforward 3-minute ballad in 4/4 time, but the guitar textures are spot-on, and Freeman‘s vocal delivery aptly demonstrates why Last In Line was not just a plate of warmed-over Ronnie James Dio leftovers.

As beautifully bittersweet as this little number was, the album gets right back to business with “Rise Above it All.” The song features gnarly distortion guitar riffs, great keyboard application, and some downright nasty metal vocals from Freeman. The guitar solo keeps up with anything Lynch ever did in his prime, and we are treated to some slick and well-mixed bass guitar throughout. While there is nothing especially noteworthy in the standard-issue rocking title track “Devil’s Hand,” it is adequately solid, and there is some creative call-and-response action preceding every iteration of the chorus, followed naturally by some great blues rock guitar. Slamer rolls back the gain knob a bit again for “Unified,” which starts out feeling like the usual metal band ballad, but the powerful chorus provides some healthy contrast throughout.

Another winner that grows on the listener is “Heartbeat Away,” which sort of stumbles in the door, but shrugs off the awkward entrance and shines as one of the cooler choruses of 2018. It’s like AOR rock concentrated into a tasty (albeit inedible) Tide pod of feelgood vibes. The last minute consists of Slamer just going for it with soaring leads that would make Neal Schon blush. It’s really a great track and deserves to be heard.

Interestingly, the first track only really kicks into high gear upon the line, “When a push becomes a shove,” and that just happens to be the name of the final track of the album, a (Mister) big bruiser of Gilbert–Sheehan proportion. The matched up guitar and bass arpeggios are just wicked, as is the relentless energetic drum beat. It’s not “Shyboy” or anything, but damn if it doesn’t come close.

Just when we thought the year of 2018 had nothing else interesting to show us, the Devil himself showed his hand, and it’s aces and eights. This brave new album is an interesting reinvigoration of the very best of 1980s melodic AOR, all twisted up with modern taste and sensibility. Any magazine considering an award for best melodic/hard rock 2018 needs to have this one on their short list. The album just hit us this weekend like a freight train, and can be ordered HERE.

Our rating of this album is also a bit like a dead man’s hand: 9’s and 8’s. All well-deserved. Mike Slamer dispenses masterful prime-time guitar licks like they’re Pez. Andrew Freeman has an impressively diverse vocal arsenal. Get ready, because here comes a big list of great stuff, where if you like any of this, you will really enjoy Devil’s Hand. Journey, Night Ranger, Bon Jovi, Extreme, Mister Big, Damn Yankees, David Lee Roth, Dokken and Whitesnake are all baked into what is undoubtedly one very tasty AOR Hot Pocket. Be sure to check it out.