Mythology and art have forever been inseparable from the allure of forests, their might and majesty weaving into the tales of humanity’s most fundamental folklore. Fantasy and history coalesce between towering trees, the musings of man fleeting as sunlight filters through the canopy and dapples leaves scattered across the ground. There is no better way to re-imagine this otherwise indescribable awe and grandeur than with the power of heavy metal, a task taken head-on by English metallers Dark Forest. Returning after four years of silence with their fifth studio album, “Oak, Ash, & Thorn” is a bombastic collision of English history and true heavy metal that blossoms in a celebration of unparalleled proportions. Packed with joyous might and melodies rooted deep in folk music, “Oak, Ash, & Thorn” tells grand stories with adept musicians at the helm, growing on itself in fervent enthusiasm over the course of nine tracks for an opus full of festivity.

“Oak, Ash, & Thorn” defies the many traditional descriptors of metal, never once manifesting with anger or with anguish, instead favoring the brighter spectrum of emotions. From jubilee to joy, even the darkest tales within its songs are told with the victorious triumph of any great epic, and not without a number of nods to power metal as they make their way. This vibrant approach does not grow tiresome as the album proceeds, but continues to invigorate as the atmosphere continues in its all-encompassing enchantment. Dark Forest’s prior full-length album was also positively received for its upbeat delivery and unique touches of folk, but “Oak, Ash, & Thorn” reflects a more experienced approach to songwriting that 2016’s “Beyond the Veil.”

The most defining character Dark Forest has acquired comes in the form of the unwavering persistence and absolute endurance of guitarists Pat Jenkins and Christian Horton, the dynamic spotlights which bath each new passage in brilliant light. Neither one submissive to the other, it is a lively partnership which consists of enthusiasm, technical mastery, and unbridled passion for their craft. Playing riffs with spirit that reflects the vast legacy of NWOBHM, the sheer energy of their delivery gives “Oak, Ash, & Thorn” an unstoppable momentum which wraps through tracks that span upwards of seven minutes long. Absolutely soulful in its warmth is the comforting heartbeat of the rhythm guitar, spurring the tempo of “The Midnight Folk” as the lead riffs hit their stride. With one of the most memorable melodies on the album, “The Midnight Folk” immerses the listener in a refrain that rolls smoothly through verses in the easy rhythm of a dance anthem, similar to the cheerful jaunts of Skyclad. “Avalon Rising” begins with two a melody gently intertwining with a soothing rhythm, mounting to the vocal introduction with seamless unity.

Harmonies that run the gamut from calming to invigorating give title track “Oak, Ash, & Thorn” some of the greatest draw of the entire album, packed to the brim with talent and flawless execution in a track that runs more than eleven minutes long. Not willing to shy away from longer songs, Dark Forest has developed a formula that keeps an engaging conversation with the listener, a natural format that mimics intimate storytelling. To keep from falling into the mid-tempo slog of other heavy metal disciples, Dark Forest has a number of unique elements up their sleeve, including the a capella opening on “Oak, Ash, & Thorn” and the distant horn of “Eadric’s Return” that pull the listener into the tale as a participative member rather than a mere onlooker. Also found among discrete tastes of folklore and myth is a blinding amount of national pride, “Eadric’s Return” being the prime example. Dark Forest’s celebration of English history was inspired by Horton reading Rudyard Kipling’s 1906 book “Puck of Pook’s Hill,” with the cover art reflecting three distinct eras of English history that are explored further through the lyrics. 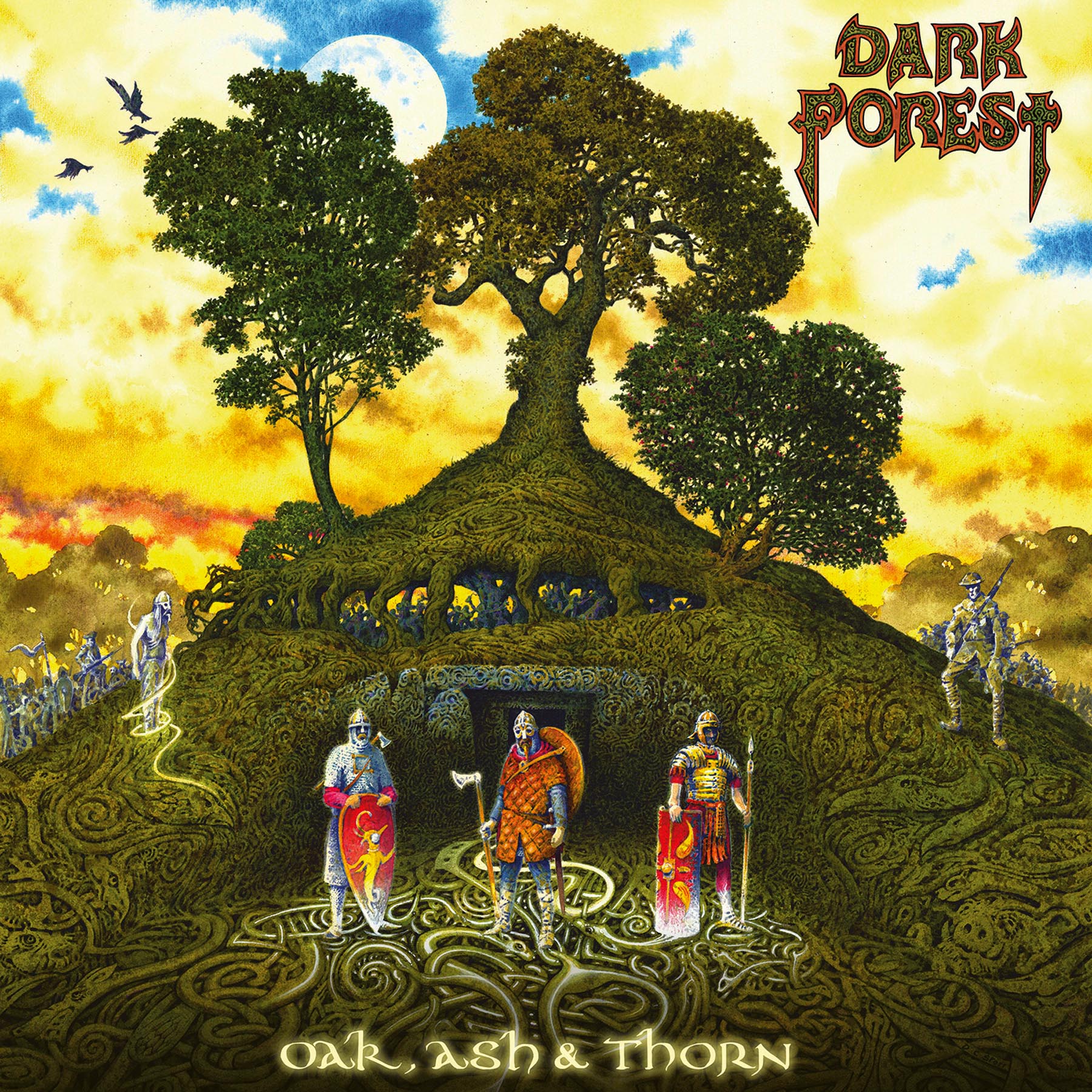 The words themselves are equally important as the inflection with which they are delivered. It is in the latter half of the album which sees vocalist Josh Winnard express much-needed confidence most of all, including a capella segments, but striking most strongly in the rousing choruses of “Rising Avalon” and “Heart of the Rose.” More emotional inflection carries in his voice than in “Beyond the Veil,” and it seems as though Horton has focused his songwriting to support the lively tones Winnard strikes with, including a more fruitive exploration of range and depth. There is a clear improvement in the chemistry between members, not just in the partnership between Horton and Jenkins, but their unwavering support for Winnard’s vocal delivery in a variety of moods and tempos.

Dark Forest has harnessed the sun and used it to tell tales in a series of nine tracks that hold the inspiring might of power metal without losing the technical edge and strength of heavy metal. Horton and Jenkins paint vivid pictures that sooth, uplift, and transform melancholy into jubilation with tones that swing from folk to the modern era of metal. “Oak, Ash, & Thorn” warms listeners from the inside out, engaging and conversing between history and mythology, driven by merry musicianship. The songs are written in such a way that tracks more than seven minutes long simply fly by, and the songwriting shows increased maturity in creating a more cohesive composition between instrumentalists. Without a single dull moment, this record is an exciting opportunity for fans of metal to enjoy the fresh air and celebrate artists who are truly passionate about their creation.

A joyous celebration of English history and the brighter emotions of heavy metal, Dark Forest produces an enthralling album which harnesses technical musicianship to tell stories of light and victory. Touches of folk and immersive storytelling make “Oak, Ash, & Thorns” an engaging and conversational listen that stands apart from a scene that is often all too dark and grim.