The heat of summer has arrived, and with it the eager anticipation for long nights out on the town filled with laughter, drinks, and driving with the windows down towards a setting sun. All of those seeking a soundtrack for such carefree escapades need look no further than the blissful electric bite of “Ignite the Sky,” an album as brilliantly bright as the purest neon-soaked midnight. With what can only be described as genuine hard rock sharpened on the unforgiving edge of metal, Latvian band Bloody Heels brings perspective and authenticity with an album that is anything but just another rehash of the 80’s glory days. “Ignite the Sky” is absolutely impenetrable from start to finish, bursting at the seams with explosive riffs and unstoppable energy that give wings to an album that is larger than life. Also not without its fair share of melody, Bloody Heels’ sophomore album highlights life’s most triumphant moments with its speedy, upbeat pursuit to harness the spirit of hard rock.

The record has the uncanny ability to perfectly capture the atmosphere of a single moment in time, honoring each dimension held within those precious seconds with a portrait of their full intensity. This magic is only possible as a result of the sheer chemistry between the musicians of Bloody Heels, the quartet working in perfect unison to craft an opus that balances a vocal-forward focus with the stellar musicianship achieved by its instrumentalists as they strive towards a common vision. Vocalist Vicky White proves his versatility as a singer from belting out the high-pitched chorus of “Farewell to Yesterday” through the tender crooning that weaves the first verse of “Healing Waters.” Complemented by the robust depth offered by expertly balanced backing vocals, White howls, rasps, and sings his way through “Ignite the Sky” without ever losing steam. His vocal prowess is highlighted in a range that is fully explored throughout the album’s duration, but reaches some of its most enjoyable moments in the heavy heart of “Criminal Mastermind” and clean isolation of “Black Swan.”

The sheer energy White exudes could carry the album on its own, but he finds himself accompanied by the virtuosic guitarist Harry Rivers to create an unmatched leading ensemble. From the picking on “Silhouette” to the blistering solos that find their way onto just about every track throughout the album, Rivers proves to be a master of atmospheric delights and unparalleled versatility with the star-studded showmanship that overflows from “Streets of Misery.” Each solo is entirely unique and appropriate for the track in which it is buried, swelling like a tidal wave in a combination of sheer speed and technical complexity that gives Rivers an untouchable charisma. Timing and precise execution place Rivers in a pivotal role for setting the tone of the album as it smokes with the fire of artistic passion and creative fervor. Giving the strings a more earthly foundation is a healthy appreciation for bass, showcased best in the bass line that opens “Farewell to Yesterday,” but also demonstrated in the crucial moments of “Criminal Masterminds” that leads into one of the album’s most memorable guitar solos. This attention to detail and composition is evident throughout “Ignite the Sky,” leading to delightful layers that give listeners so much more than simple melodies to devour. 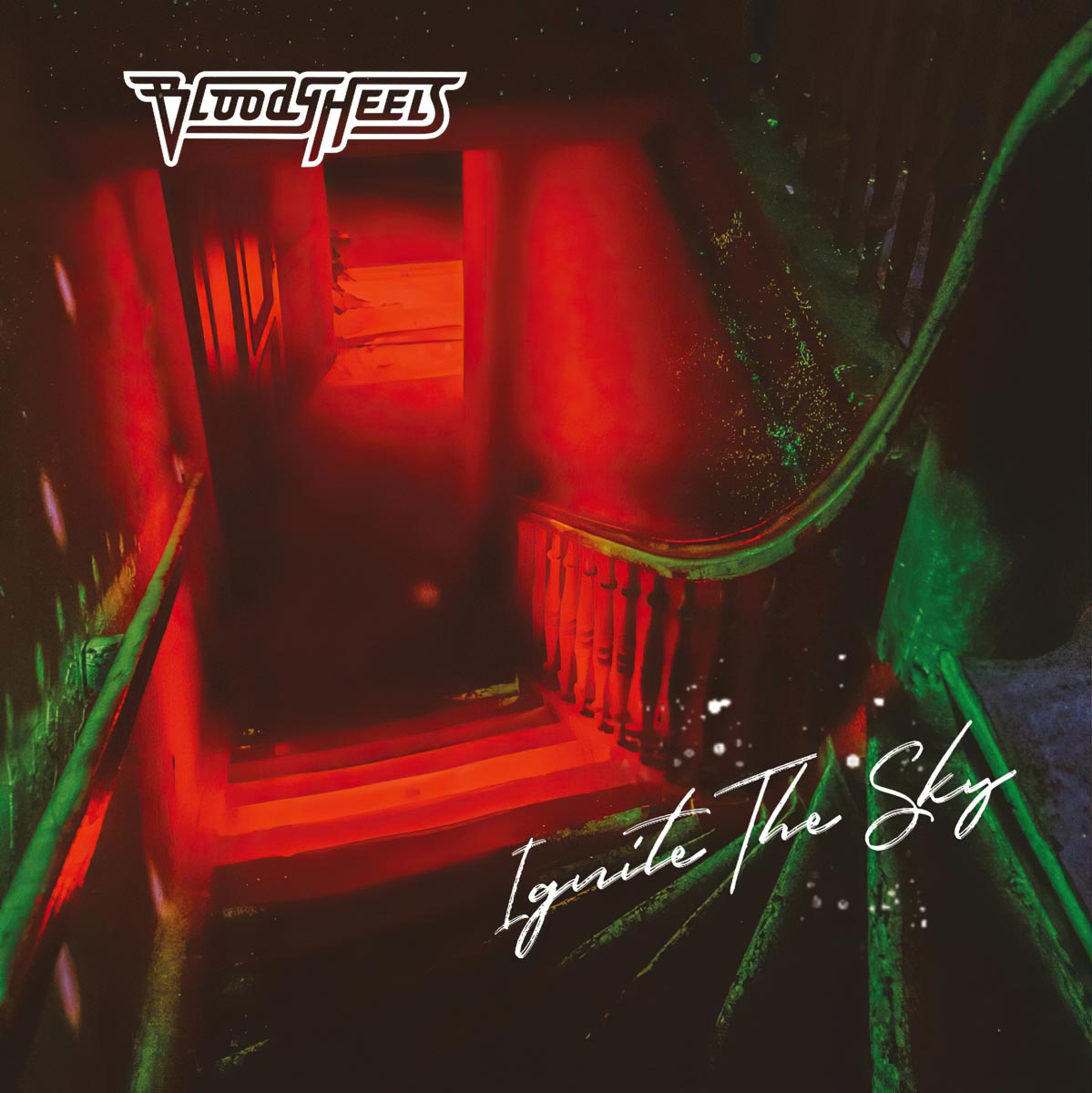 Speed may be the name of the game, but “Ignite the Sky” has its smokier and more sultry moments between the flames of the fire itself. Providing a perfect background track for the final moments of a long night out is the sensitive tones of “Silhouette,” painting an image of dissociative contemplation in the absolute stillness of one finding themselves overwhelmingly alone. Deep notes from a cello draw out a rich heartiness from Rivers’ guitar not found anywhere else on the album, and Bloody Heels use “Silhouette” as a slow and seductive exploration of human emotion. Within this track Bloody Heels gives listeners a glimpse at the dizzying weight of solitude while wrapping them in the thick smoke of an early morning haze, bitter with the tang of nicotine hanging in the air. The immersion doesn’t end there, as the proceeding track “Healing Water” strikes directly to the listener’s soul with a dazzling saxophone passage that elevates “Ignite the Sky” to an exploration of exhilaration in its purest form. For all of their impressive showmanship and electric aggression, Bloody Heels also show themselves to be unafraid of a more sensitive examination of humanity’s shadows with a subtle grittiness that persists across the album.

Capturing life at its brightest and most brilliant in blinding color, “Ignite the Sky” is teeming with irresistible hooks, dynamic melodies, and choruses so infectious that it’s impossible not to put the album on repeat. Every moment of the album is a microcosm of life lived to its fullest, and is clearly the product of talented musicians that have put all of themselves and their abilities into an ambitious project. There is no question that “Ignite the Sky” will be one of the highlight albums for a scorching hot summer, one which invokes a joy for the present and a sweet taste for nostalgia in the same breath. Full of anthems that embody the best of 80’s rock with a high-quality modern production that gives them a timeless appeal, Bloody Heels have outdone themselves in an electrifying sophomore album that promises arena-rocking vigor for years to come.

Bloody Heels have created an entirely immersive sonic experience which engages the senses and evokes images of life’s most euphoric moments with the enthralling dynamism of 80’s rock. “Ignite the Sky” burns as hot as fire with its unforgettable riffs and infectious choruses that fight to define passion itself in an outpouring of the creative spirit.