When one resides outside a given nation or region of the world, it can sometimes be difficult to properly appreciate the cultural divides found within. While it may be obvious from the outside that Texas and New York are not exactly cut from the same cloth, it can be easy to assume a place like Japan is a monoculture. Yet, closer inspection reveals wide differences between Hokkaido, Tokyo, Osaka, and Kyushu. Such is also the case for our friends the Britons. An average American may assume England to be a large-scale replica of London. However, there remains historically a culture unique to Northern England, of Yorkshiremen and others, and in the world of heavy metal, one man reigns as the icon to all Northern Englishmen: legendary Saxon front man “Biff” Byford.

To the first wave of British heavy metal, vocalists such as Robert Plant, Ozzy Osbourne, and Ian Gillan led that particular charge. However, just when things in 1980 were looking dismally disco-riffic for the world of rock and metal in the UK, the next generation said, “once more unto the breach,” and were driven by men such as Bruce Dickinson, Rob Halford, and Biff Byford. This became the New Wave of British Heavy Metal, and as such, Biff has a place in the “book of heavy metal” (read it!) as a founding godfather of the movement. Northern England historically has a darker, rougher, tougher, older and grittier reputation, and Biff’s Saxon truly embodied this, lyrically, complete with a glorious Northern accent.

In what is perhaps a parallel with Biff’s dear Motörhead mate Phil Campbell, Biff is now autographically inspired to pen his memoirs with a debut solo album, entirely separate from the Saxon gig. It is clear that Biff wanted this record, entitled the “School of Hard Knocks,” to not only sound different from Saxon, but let’s just get this out of the way right here: it sounds better. Granted, this is subjective, as all album reviews essentially are, however, the new album sounds modern. Polished. Contemporary. Clean. While Saxon albums like 2018’s “Thunderbolt” are naturally more modernized than “Denim and Leather,” they still carry a mix and production soaked in 1980s NWOBHM flavor. Biff’s new solo album, on the other hand, is powered by a new band comprising Fredrik Åkesson (Opeth) on guitars, Christian Lundqvist on drums and Gus Macricostas on bass. The musicianship and arrangements are absolutely 21st century, and it is heartwarming to see a nigh-on septuagenarian metal legend adopt such an evolution. 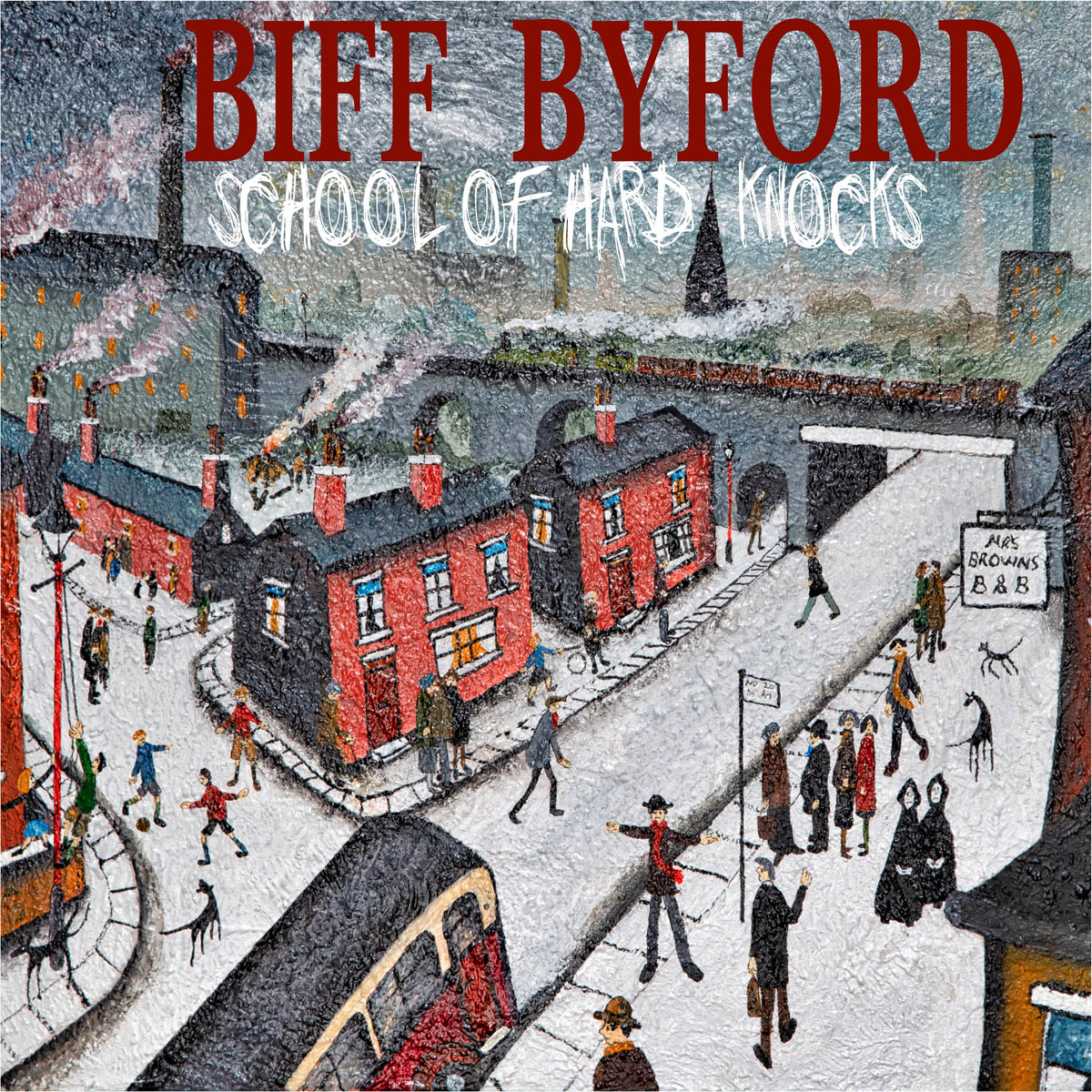 From the fun and self-explanatory opening track “Welcome to the Show,” to the autobiographical title track “The School of Hard Rock,” it is obvious the writing is a salute to the old, woven together quite nicely with modern production. The album embraces Biff’s fondness for the old, the medieval, and the macabre with the Poe-inspired “Pit and the Pendulum,” as well as its compelling nylon string and spoken word introduction, “Inquisitor.” The aforementioned Poe homage is actually a prog metal dungeon crawl rife with Opeth influence, and it is breathtaking. It may be one of the cooler things to which Biff has ever put his name. The following track, “Worlds Collide,” is musically more like something from Symphony X’s “Odyssey” album, such as “Wicked” or “King of Terrors.” It’s a beautiful modern metal tune complete with blistering Scandinavian guitar leads.

Just when we thought we were starting to understand everything there was to know about this album, Biff decides to completely reinvent Simon and Garfunkel’s “Scarborough Fair.” Yes, that Simon and Garfunkel. And it’s brilliant. We are treated to Biff’s smokey and well-aged vocal cords weaving a tale of parsley, sage, rosemary, and thyme, all set to lovely steel string acoustic. In truth, it originates as a traditional folk-song of Yorkshire, and it is therefore understandable why Biff wanted to carry that particular banner for a day. Worry not, Byford ancestors, he carries it well.

The following song, “Pedal to the Metal,” has the most Saxon feel of any track on the record, which frankly will hardly bad news for any Biff fans picking up the new record. Another rocker is found in “Hearts of Steel,” and a polished ballad in “Throw Down the Sword,” and a feel-good bittersweet unplugged love song to close the album with “Me and You.”

They say you cannot teach an old dog new tricks, but this old dog named Biff is teaching us new tricks today with this new album. Although it seems like Biff Byford may have just done this album “for the hell of it,” to prove it to himself and to check something off one of life’s little list, he accidentally or intentionally put together a fun, solid, and exceedingly listenable musical adventure. To paraphrase Jeff Goldblum in Jurassic Park seeing dinosaurs come to life, “You did it. You crazy son of a bitch, you did it.” With this album, Biff may be our new favorite mad bastard of Lemmy-like proportion, and it’s well-deserved. The record hits shelves on 21 February. It can be pre-ordered at the usual online retailers, or directly from Biff’s website here.

For Saxon fans, this solo outing by Biff Byford is absolutely essential required listening. However, even to metal fans at large, there is a lot to be appreciated here. This album is very modernized and highly accessible to listeners across most metal genres, not just the hardcore Denim and Leather crowd. Biff has truly reinvented himself, and in a way his fans will most definitely love.