Historians say that the Vikings once made their way down the Rhine, seeking out riches and new lands to plunder after having taken their fill of more Northern lands. While the history of the Vikings in Germany is sparse, German death metal band Asenblut have brought back the spirit of the historic plunderers with their latest album “Die Wilde Jagd.” Melodic death metal as the core of their spirit, “Die Wilde Jagd” ties in elements of black metal and heavy metal to enrich their sound beyond the caricature of Viking metal bands that have come to dominate the metal scene.

In some ways, their attempt to differentiate themselves from the masses falls flat, particularly in the shadow of the genre-defining titans Amon Amarth. It’s impossible to listen to the throaty growls of Asenblut front-man Tetzel without thinking of the powerful roars of Johan Hegg, but such a comparison is a nod to Tetzel’s sheer power as a vocalist, especially given that his career as a vocalist began in 2006 with the formation of Asenblut. “Die Wilde Jagd” is a showcase of his vocal abilities like no other, primal roars so thunderous it’s as though they were gathered by thousands of voices from both history and mythology. With four full-length albums under their belt, this latest offering from Asenblut shows growing comfort with their chosen identity in songwriting without giving up some of the external inspirations that fuel them.

Where the album’s opening is more formulaic in the vein of Amon Amarth’s well-known battle hymns, the middle of the album truly opens up to a broader range of colors after a relatively unrewarding slog across the first three tracks. “Drachentoeter” begins with a melodic approach which allows listeners to savor the cohesion between guitarists Claus Cleinkrieg and Stan Ro, a dance that lasts for almost a third of the song’s duration. First embracing rich melody to build on riff after riff, “Drachentoeter” swings closer to the frigid textures of black metal than the war-hungry thunder of the album’s first half. Tetzel’s voice shifts from the anthemic chants of a battle cry to the wounded howls of anguish, matched with dissonance across the strings and an added edge to discordant bass. Though the drums never delve into the traditional blast beats that mark the sub-genre, their absence was painfully missed as melodic death gave way for something filled with greater futility and hardiness. 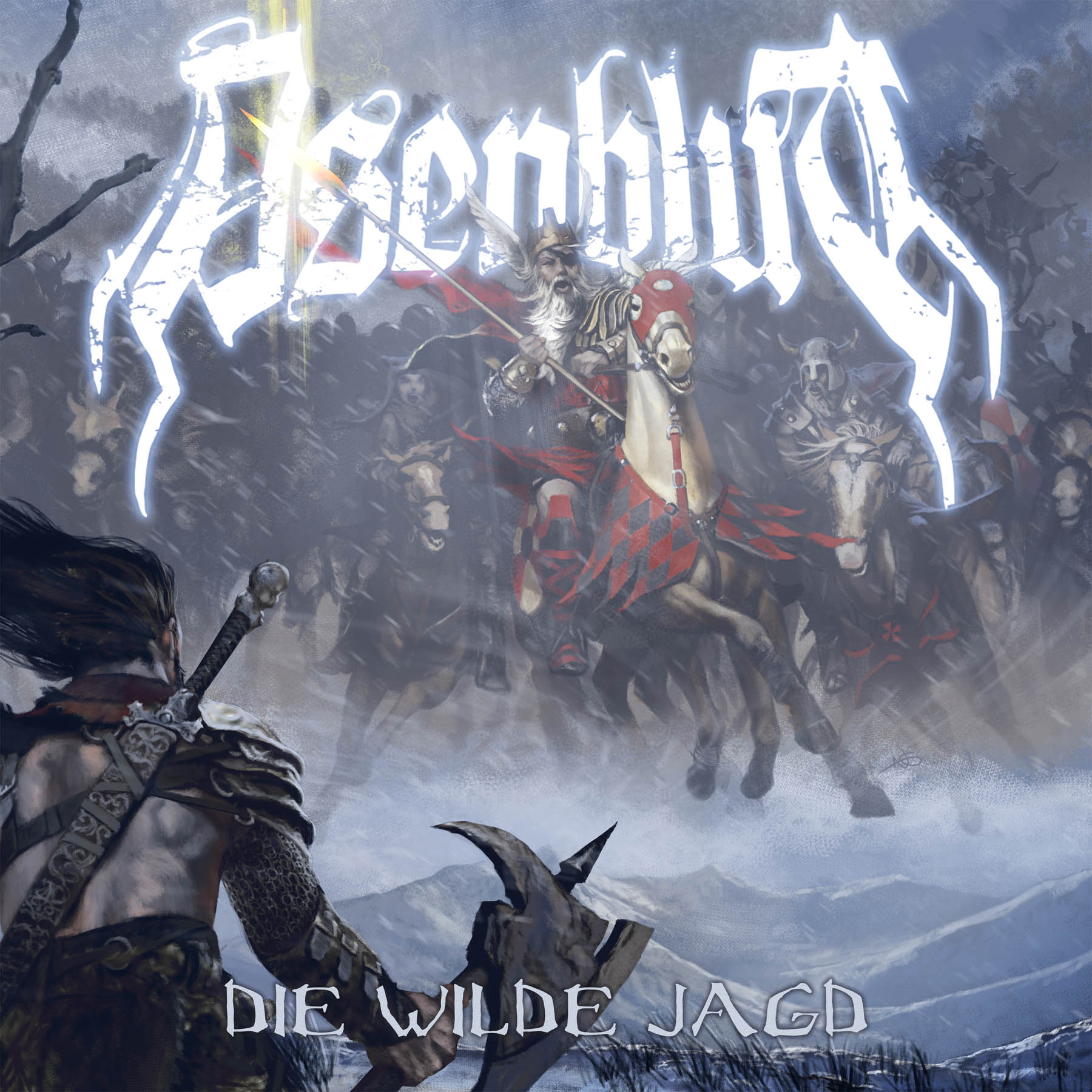 Black metal is not the only external influence driving “Die Wilde Jagd” beyond the barren fields of off-brand Viking metal. “Penumbra” includes an enthralling view of drummer Balrogh as more than a mere drummer-boy to an unseen Viking army, showcased in yet another long-winded instrumental introduction. Blarogh is not the only musician afforded an opportunity at a personality outside of melodic death metal, with seventh track “Weder Gott noch Koenige” drawing serious inspiration from heavy metal giants such as Iron Maiden. Bright guitars surface as welcome beacons from a sea of gritty riffs and chugging to steal an indescribably stunning spotlight, transcending death metal into a brilliant display of pure metal musicianship. The structure of the song changes entirely to adapt for these flourishes that appear between verses like welcome reminders of the capability Asenblut’s members possess beyond the constant drive for brutality. Though one of the shortest tracks on the album, it is the song which most clearly overflows with a love for the art that they have striven to create, one where they are inspired and seeking to grow their own wings rather than proceed down a well-trodden path. For a glimpse of all that Asenblut has buried beneath their drinking horns and battle axes, look no further than “Weder Gott noch Koenige.”

At the end of the day, Asenblut has shown themselves as a capable and blunt replica of Thor’s hammer, more than worthy of striking the ground with the fury of men long lost to history. For a majority of “Die Wilde Jagd” there is a tired repetition that stands in the footprints of existing giants of the genre, powerful but formulaic. Yet at other times a unique personality shines out from the frothy waves, a dragonship cutting through the storm with a fierce German tongue and two capable guitarists who deserve to be cut loose from their constraints. For Viking metal, “Die Wilde Jagd” is another successful celebration of metal’s most revered historical culture as well as a testament to metal’s enduring strength. For Asenblut, it is a tempting look at what a broader future could bring, with a taste of blackened death and indulgent riffs lingering on the tongue far after the music fades.

Asenblut presents yet another modern-day interpretation of pure Viking might, this time re-imagined in unyielding German death metal touched by fleeting glimpses of frostbitten brutality. Powerful vocals and anthemic battle hymns define tracks which include bright touches of personality from the modern era alongside a reverence for the past.