Amorphis is arguably one of Finland’s biggest musical export alongside Nightwish. With twelve albums so far under their belts, Amorphis has toured the world several times, received countless gold records and managed to achieve success after success with their unmistakable mix of metal, folklore and rock. Some elitists and rabid fans have been complaining about decades on how this band has been progressively changing its sound to the point of no longer even being heavy metal. The truth of the matter is that ever since their departure from the world of death metal, their music, though obviously lighter in its flavor, has improved in the songwriting and creativity department.

For those reading and unfamiliar with their trajectory, their first album The Karelian Isthmus was a pure death metal record, plenty of dark, abysmal, and – for some unbearable – heavy riffs combined with slow tempo drumming and the original and brutal vocals. Their sophomore effort Tales from A Thousand Lakes while still rooted in death metal began a period of evolution, fusing their sound with psychedelia, progressive elements and traditional folk (It was their first record based on the Finnish 19th century work of epic poetry, named “Kalevala”). From there on this “evolution” morphed their sound to the point that the 2001 album Am Universum was completely stripped down from death growls and included a prominent keyboard work, saxophone and an even more pronounced psychedelic twist.

The addition of Tomi Jousten to the band’s lineup in 2005 was certainly an inflexion point. For whatever reason he breathed life into the collective, and with him the cookie monster vocals returned, but in a whole new level… he is capable to performs both hypnotizing clean vocals and rebellious growls in a perfect way from one moment to the other. Since the Skyforger album in 2009, Amorphis have been doing what many bands are afraid to do: They have taken all that they have done over their career and put it into a blender, trying to redefine their own musical identity while improving their established trademark sound. Under the Red Cloud was an album I enjoyed very much, but Queen of Time showcases the culmination of this quest in an unquestionably enthralling and consummate way.

The album was birthed in only three months’ time at Jens Bogren’s Fascination Street Studios, as the band continued working with whom they consider their legitimate seven member. Jens Bogren’s input played a huge role in the kaleidoscopic magnificence of the music, one that reportedly took the band themselves by surprise: “This album turned out as a massive amazement to all of us. During the rehearsing and pre-production we didn’t have any idea that Jens had this huge picture inside of his head about the landscape of the album. Sure, he talked a lot about it, but we didn’t know he was actually going to put all the things he had in mind onto the album!” 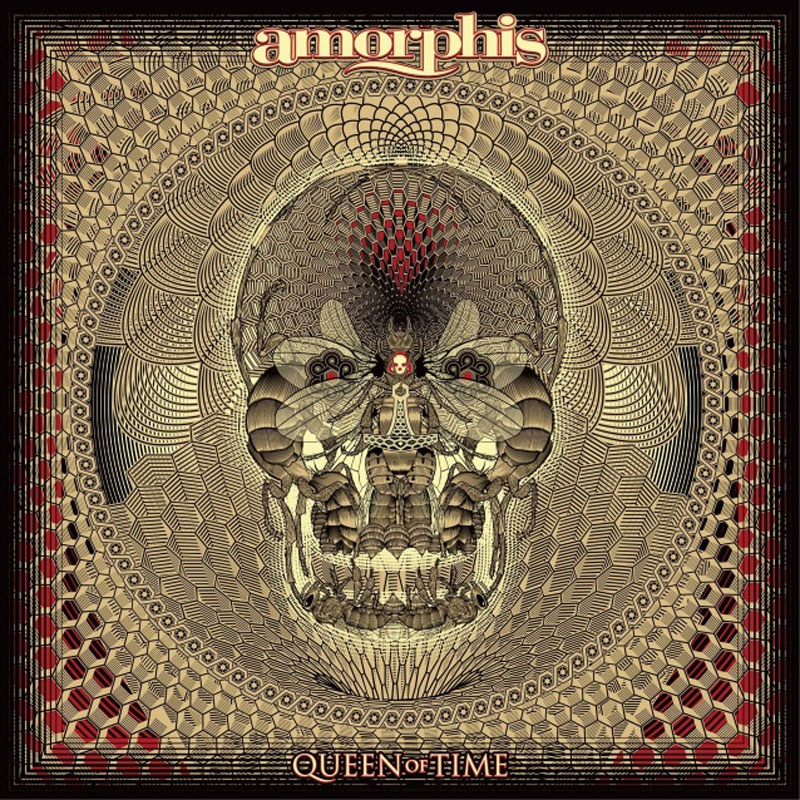 The “Queen Of Time”Album Artwork

The album opening, and first single is “The Bee”, a strong statement signaling what’s coming out of the gates. It begins with sonorous laryngeal singing, almost like a Gregorian chant sounding section wrapped around haunting shimmering synths, segueing slowly into heavier guitars paired with Tomi Joutsen’s voice: sometimes grumbling, sometimes full of mournful fervor, sometimes crystal clear above everything. The song exudes grandeur and sheer beauty through the elaborated orchestration and the haughty chorus, it grabs your attention by the neck and doesn’t let go. “Message in the Amber” follows next, showing the band’s folkier side mixed with a faster mood, carefully using the bold contrast between slower verses and punchier choruses accompanied by the heavy guitars and wrapped with the choirs and the flutes evoking an idyllic view of a other-worldly Finnish landscape: a masterful exercise in blending light and darkness, using the contradiction between the clean and harsh vocals in a refined and intelligent manner: a frankly beautiful song.

“Daughter of Hate” opens with an brief organ – and an unconventional 7/4 rhythm – taking things into darker territories while conserving the mind-bending fresh direction: the contrast of black metal screams and dissonant guitars somehow work exceptionally well with the mellow singing, never overpowering the lush and vivacious melodies. A saxophone solo and oriental melodies accentuate the inexhaustible wellspring of progressively flavored folk metal, and the slow interlude prefacing the guitar solo around the 4-minute mark is pure gusto. Lyricist Pekka Kainulainen appears for the first time as a narrator: His wise and venerable shaman-like voice is a perfect match to the music, conveying the lyrical message of the album also symbolized by the image of the bee on the album cover (The Queen of Time): the cosmic powers that people believed in long ago in a very universal way, the rise and fall of cultures, the microcosm that can trigger cataclysmic changes, the fall of world empires ushered in by a small sprouting seed, the butterfly that causes a hurricane.

There’s a plethora of guest musicians in the record: Chrigel Glanzmann (ELUVEITIE) on pipes, laryngeal singer Albert Kuvezin and saxophonist Jørgen Munkeby, plus an orchestra and a choir for the first time in the band’s 30 years career. However, the most riveting collaboration comes by the hand of the fabulous Anneke van Giersbergen in “Amongst Stars”: her captivating voice offer a Godsend counter balance to Jousten’s presence, turning the symphonic catchiness of the track into a seductive 90’s pop-metal infused steamroller of vocal magnificence, with a melodious guitar solo carrying the serene and electrifying feeling.

Above everything else that makes this album so astounding for my ears is the mood that it creates while listening. Whether meeting the Middle Eastern essence and demulcent groove in “Heart of Giants” or harkening back to the deepest Finnish roots with sublime flair and soaring strings backing the thundering chorus in “We Accursed”, Queen of Time finds Amorphis arguably peaking their creative streak, reinvigorate their already polished style while keeping a consistent flow and avoiding the traps of self-indulgence. A symbiosis of countless styles, carefully balancing heaviness, experimentation, complexity and catchiness, Queen of Time is not only a stunning effort in an already remarkable career: it’s a truly monumental testament to the majesty of creation, the beauty of light and the mystery of our very own existence. I might not be loss for words, but I am nonetheless awestruck. Queen of Time has floored me completely while claiming the top spot in my list of metal releases for the year 2018.

So, what does Queen of Time sound like? It’s definitely Amorphis, the sound of a band penetrating deeper into the dark, mysterious and sublime majesty of the Finnish’s poetry, delivering a more dramatic and cinematic sound, anthemic vocal melodies, and memorable instrumental passages, conveying some sort massive combination of a near perfect melding of death metal, folk, prog, hard rock, orchestral and choral music, all of the above cooked as a cohesive and enchantment infused recipe. Just go and buy it, you can thank me later.