Some perceptive individuals enter the realm of university academia and realize how it is largely an echo-chamber of self-indulgent silliness. There are few examples of this more hilarious than the abstracts of thesis papers submitted by university students, typically post-graduates. For example: “In this article, we amplify the post in post-intentional phenomenology to demonstrate some of the unique possibilities this methodology might afford qualitative researchers interested in experimenting with entangled connections among seemingly disparate philosophies, theories, and methodologies.”

Without fail, the most absurd of these over-inflated keyboard abusers employ one phrase above all others: “Draw upon.” This thesis paper draws upon Einstein’s theory of relativity to explore the intersexual pan-sexual paradigm of the platypus.

Before people start wondering what any of this has to do with a review of a rock record, try this thesis abstract on for size: Drawing upon classic rock juggernauts such as Bad Company, Kansas, Boston, and Queen, the AOR would-be-legend known as Airrace seeks to change everything we know about quality Arena rock with the most interesting comeback album since Journey’s “Trial By Fire.”

Airrace are, for better or worse, the melodic radio rock equivalent to Anvil. They hit the scene hard in 1984 with debut album “Shaft of Light,” with Jason Bonham on drums, supporting acts like Queen and AC/DC. Unfortunately they fell out of orbit and crashed back to earth around 1985, not to be seen again until the 2011 comeback album “Back to the Start,” albeit with some lineup changes. However, although the 2011 album was not bad, we sincerely consider the all-new 2018 record “Untold Stories” to be the real comeback. If founding guitarist Laurie Mansworth was shaking off the dust and cobwebs in 2011, he is in Rocky VI fighting shape with this new album.

The album’s introductory track, “Running out of Time,” starts un-ambitiously, with piano chords right out of the finest of early 80s ballads, and a slow, big reverb Les Paul lead. Just as the listener starts to wonder where it is going, the song starts pounding right into a slamming fusion of Styx and Foreigner, with a smattering of Neal Schon guitar licks. Vocalist Adam Payne deserves special credit, because he really makes this album. Make no mistake; it is a team effort, but without Payne’s vocals, the album would be simply solid rather than spectacularly scintillating. Rather than taking the foot off the gas, the album launches into an even better second track, “Innocent,” which summons rock roots ranging from Kansas to Night Ranger and their cousin Damn Yankees. Again, the vocals are out of the world, even capturing a hint of Axl at his very finest. Really, give it a listen. You’ll hear it too. And it’s great. 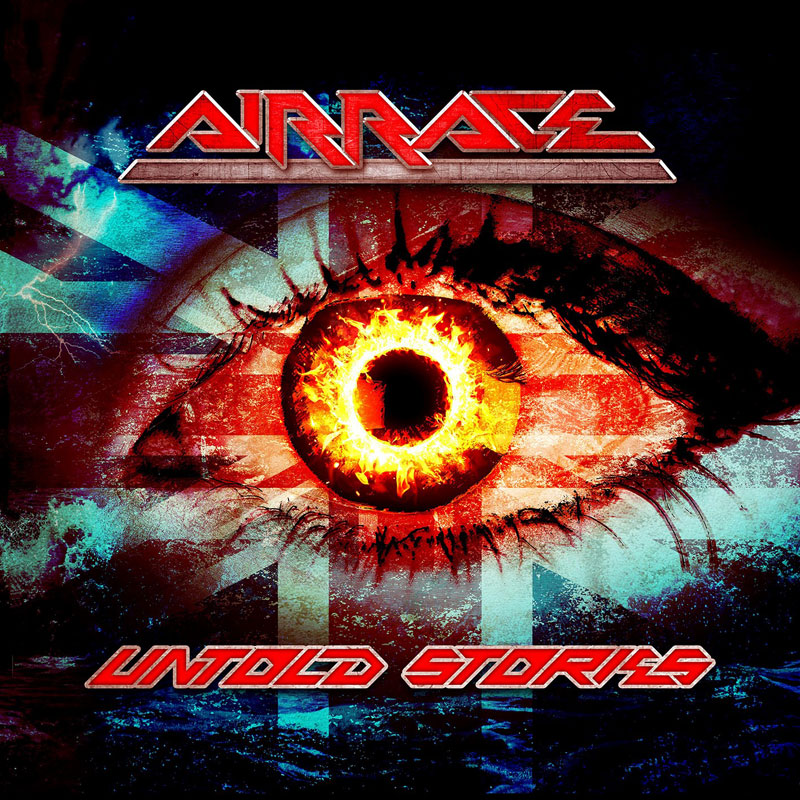 The record makes an unexpected turn off the road into a darker detour with “Eyes Like Ice.” It sounds like the song is in a minor key with guitars dropped a half-step, and it really works well. While the song could technically be considered filler on some level, it is an ear worm you will still be hearing in your head for the rest of the day. However, the Airrace Range-Rover comes tearing ass out of the woods and gets back on the road with a mission with the fourth track, “Different But The Same.” Holy hell. It’s like Led Zeppelin sat down with the Black Crowes and 1970s David Coverdale to write a retro jam that knocks your socks off, Hammond organ and all. It’s a toe-tapping finger-snapping good time. Even the last thirty seconds are a treat, when the band goes full Deep Purple. Contra “Tropic Thunder,” it is sometimes very much OK to go full Deep Purple.

Speaking of the Purp, the fifth track, “New Skin,” is like a lost B-side that never made it onto Burn or Stormbringer. However, just when we thought we had this retro-gimmick album all figured out, the sixth song “Lost” throws us for a loop. Yes, it’s an unplugged ballad with piano and acoustic guitars, and while it comes awfully close to reflecting on whether every rose has its thorn, it seems sincere in its emotional and philosophical cry for guidance. Around 2:30, after a nice transitional bridge, the drums kick in and bring this nice piece home with style. The next song, “Love is Love” kicks in with a riff right out of the Brian May playbook, but the chorus is solid gold, and barely Queen at all. While the song never really does anything to set itself above the rest, it is a solid in classic rock tradition, with a tasty solo, and great playing throughout.

The following song, “Men from the Boys,” starts in with some cool effects pedals on the guitar, and organ bits, and just gets right down to the riffing, with some respectable blues licks. The band’s label sees the following track, “Summer Rain” as the single material of the record, and it is a good song. For a number of reasons we wish we were in the 1980s, because this could get some radio play. While it’s a pleasant feelgood song with a nice melody, it is actually not our favorite on the album. It has a catchy chorus, and the return of licks that are somewhere between Neal Schon and Carlos Santana, but it doesn’t pop like some of the other songs. So feel free to check out this song before buying the album, but do not judge the album on it. We still wonder if there are people who did not purchase Extreme II based on “More than Words,” just as we wonder about those who bought that album for that single, only to be shocked out of their socks by the Decadence Dance.

In fact, we much prefer the next song, “Come with Us.” The guitars sound killer, the keys are spot-on, the walking bass line is exactly right, and the chorus just feels so good. This is a song made for cruising in a convertible with the top down and feeling awesome about life in general. The album finishes off with “Here it Comes,” which is a bit of a Boston song that never made it onto the first album, with a touch of that Bad Company again. While it is not a bad song, it has just enough filler quality to leave the end of the album feeling a bit unresolved.

At Sonic Perspectives, we employ a ratings system designed to celebrate talent and originality, to separate “Images and Words” from Yngwie J. Malmsteen album #26. In most situations, we try to reward artists who do not return time after time to the same old well. In the cases of the new Airrace record, it is a bit like a fish on a bicycle. It’s something to see, but what is its ultimate purpose? On the one hand, a band that sounds like everything from Rainbow to Mr. Big should not garner a stellar score for originality, and yet, it seems an inherent disservice to both artist and reader to give a poor score to something that sounds so good. At the end of the day, the mission of the review is to answer the following questions? Does it sound good? Should readers buy it? To both, the answer is a resounding “Yes,” even if that is the only classic rock artist we cannot hear in this album. To that end, when we rate originality here, we are not so much rating the freshness of the sound, as much as the creativity in producing a brand-new album in 2018 that sounds like the cream of 1985 radio. Perhaps we should treat it less like something stale and unoriginal, and instead think of it as a lost master recording that ended up in a shoe-box rather than on radio where it truly belongs. The album hit the streets last Friday, and can be ordered here.

This album checks all the boxes, with very solid melodies and hooks, songs that get stuck in the head for days, a cool fun groove, and good overall production. For the most part, if you cut your teeth on the gods of radio rock, ranging from Zep to Journey to Foreigner, and two dozen other artists in that same arena, it is hard to imagine you not loving this album. If you like listening to the classic rock radio station but you are tired of the same 200 songs they have been playing since the 1980s, treat yourself to this record. You will be glad you did