Cinematic ambient rock might be the most apropos way to describe the soundscapes produced by Norway’s Airbag. Spacious meditations – often focused around dreary themes of disconnection or struggle – take their time to develop over a bed of relatively simple but effective instrumental layers, punctuated by soaring guitar solos. At times beautiful, while at other moments foreboding and intense, Airbag knows how to create a mood. This ethos largely stays intact on “A Day at the Beach” even though two of the band’s longstanding members have departed, effectively making Airbag a trio. Despite its apparent sunny album title, any cheerful sentiment is turned on its head quite literally, as indicated by teddy bears being buried upside down in the sand for the album cover, designed by singer Asle Tostrup. And so it goes with Airbag.

“A Day at the Beach” being their fifth album, Airbag formed in the early to mid-2000’s and thus have had over fifteen years to develop their identity. And while the previous sentence wasn’t initially meant as a pun, when we look at their debut album “Identity”, how much have they really developed in the past fifteen years? Although they are often likened to Pink Floyd, Porcupine Tree or some aspects of Riverside, unlike those bands Airbag haven’t really “progressed” in their essential sound. Thus, the approach of the material on “A Day at the Beach” is pretty much the same as the approach of all previous four albums. Whether or not that is a good thing likely depends on your appreciation of the Airbag formula. The new album does boast one new element to their sound: more electronics make their way into the material than ever before. These are largely used to establish the sonic bed of each song’s foundation, which ultimately offers a different texture but doesn’t really change the blueprint of the song structure all that much. The dedicated Airbag listener is still going to pretty well know what to expect and that is indeed what the band delivers, no more and no less. 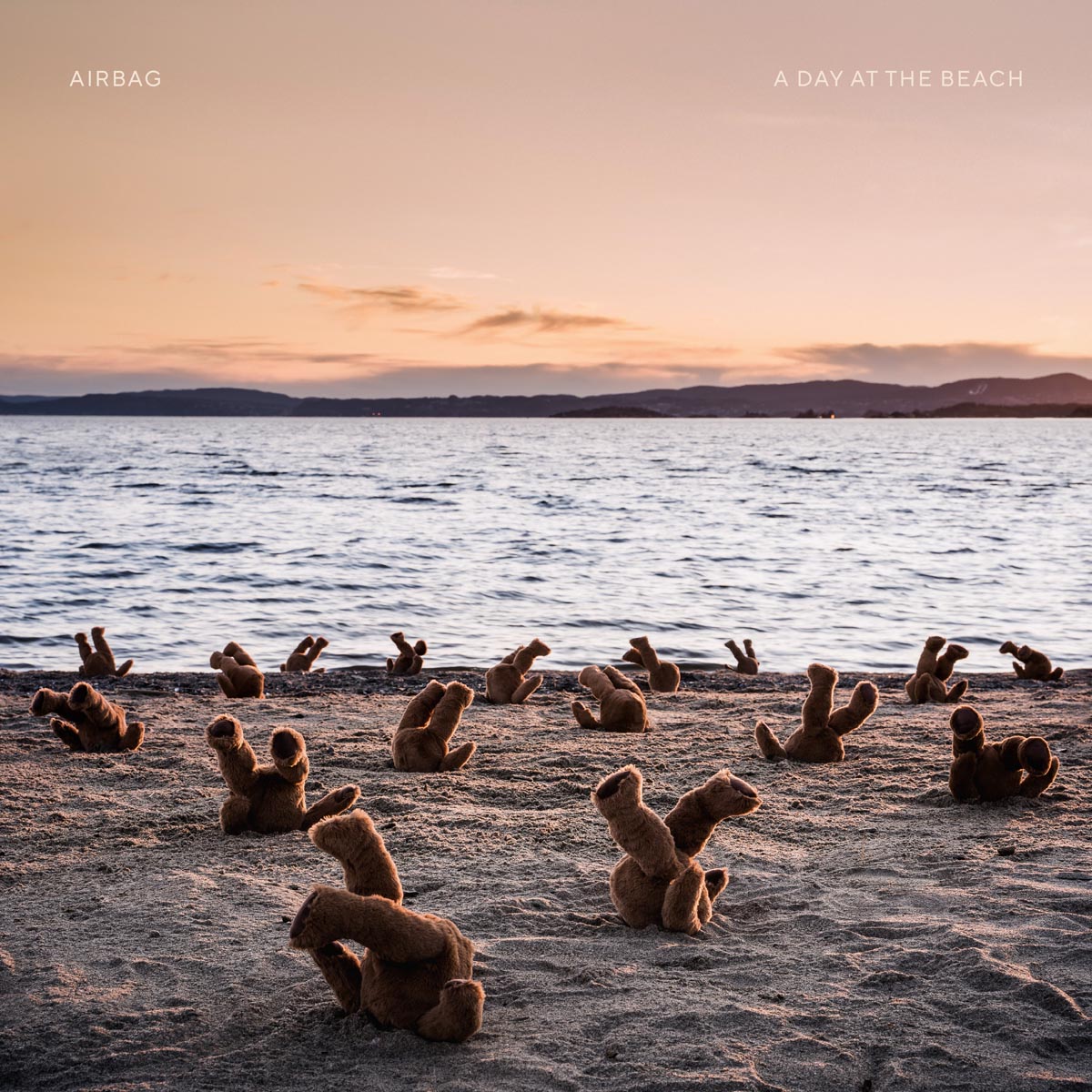 “A Day At The Beach” Album Artwork

One of the highlights of “A Day at the Beach” is the driving intensity of “Sunsets” which features especially effective drumming from Henrik Fossum, as well as guest bassist Kristian Karl Hultgren (Wobbler). The percussion is particularly well-mixed, an aspect which enhances the headphone listening experience considerably. As usual, the performance of guitarist Bjørn Riis is immaculate, though the pacing of the songs takes its sweet time to get to the gold which, it could be argued, makes the payoff all the more satisfying. The moody vibe and spacious closing guitar solo in “A Day at the Beach Pt. 2”, and the closing three-minute solo of “Into the Unknown” are some of the best Riis moments on the album.

The production and mix continue to be one of the band’s top strengths, making for a delightful immersive journey to lose one’s self in. With all of the tracks ranging from 9 to 11 minutes (the title track is split into two parts which helps break up the album with their shorter sections), the previously mentioned Airbag formula generally goes like this: start slowly and gradually with a long build up intro, the vocal verses come in generally after a minute or two, followed by occasional interludes or pauses which may stretch out for a while, concluding with an emotional Gilmour-esque guitar spotlight for two to four minutes, sometimes with a repeating chorus. The dependability of the whole affair can either be completely satisfying or dreadfully rote, according to one’s taste. Again, if the listener knows what they’re in for and keeps coming back for more, “A Day at the Beach” is bound to meet that expectation. In a shifting world of uncertain times, sometimes it’s comforting to have a band you can count on.

“A Day At The Beach” Track-Listing:

Adding a bit more electronics to the mix this time around, Airbag return with a dependably consistent batch of ambient sonic explorations. Now officially a trio, they still retain their classic spacious sound with plenty of Bjørn Riis guitar-fueled highlights