NYC hardcore/crossover pioneers Agnostic Front were at the forefront of a movement back just before your author was introduced to heavy metal. The band’s second album “Cause for Alarm” was a mainstay, where songs like “The Eliminator” and “Bonber Zee” were played weekly on the college radio station that administered the foundations for a metallic education. There was a bit of a revolution going on in New York City when punk, metal and thrash collided for what would be known as “crossover.” “Cause for Alarm” along with “The Age of Quarrel” from Cro-Mags and the eponymous sophomore album from Murphy’s Law spawned a slew of acts that would appeal to both the hardcore punks and then emerging metal thrashers. Suicidal Tendencies would follow suit with the sophomore album “Join the Army” in 1987 (which would only propel the band’s fledgling self-titled debut from 1983).

Agnostic Front would disband in 1992, before band founder Vinnie Stigma reformed the band again with vocalist Roger Miret in 1996. The band experimented with incorporating various styles over the next ten years before releasing “Warriors” in 2007, marking the full return to the band’s signature sound. Since then the band has consistently kept true, which has continued with “Get Loud!” For the new release, the band brought back artist Sean Taggart (Crumbsuckers/Whiplash), who drew the cover for “Cause for Alarm.” Many of the same characters from the cover of that seminal release also appear on “Get Loud!“‘s artwork.

If you are familiar with Agnostic Front‘s work over the years, then “Get Loud!” has exactly what you should expect. Its short (14 songs, 31 minutes), its punk, its old school thrash and its seriously loud (well, if you turn it up, of course). The band keeps the lyrical content centered on real life and often gruesome situations, depression, anti-establishment and anti-government. The band has never minced words, providing the reality punch in the face for topics like gun violence, poverty, life on the street and giving a voice to those forgotten by our elected leaders. One of the album’s best tracks “Conquer and Divide” talks about how the establishment keeps people fighting each other with lies and deceit. 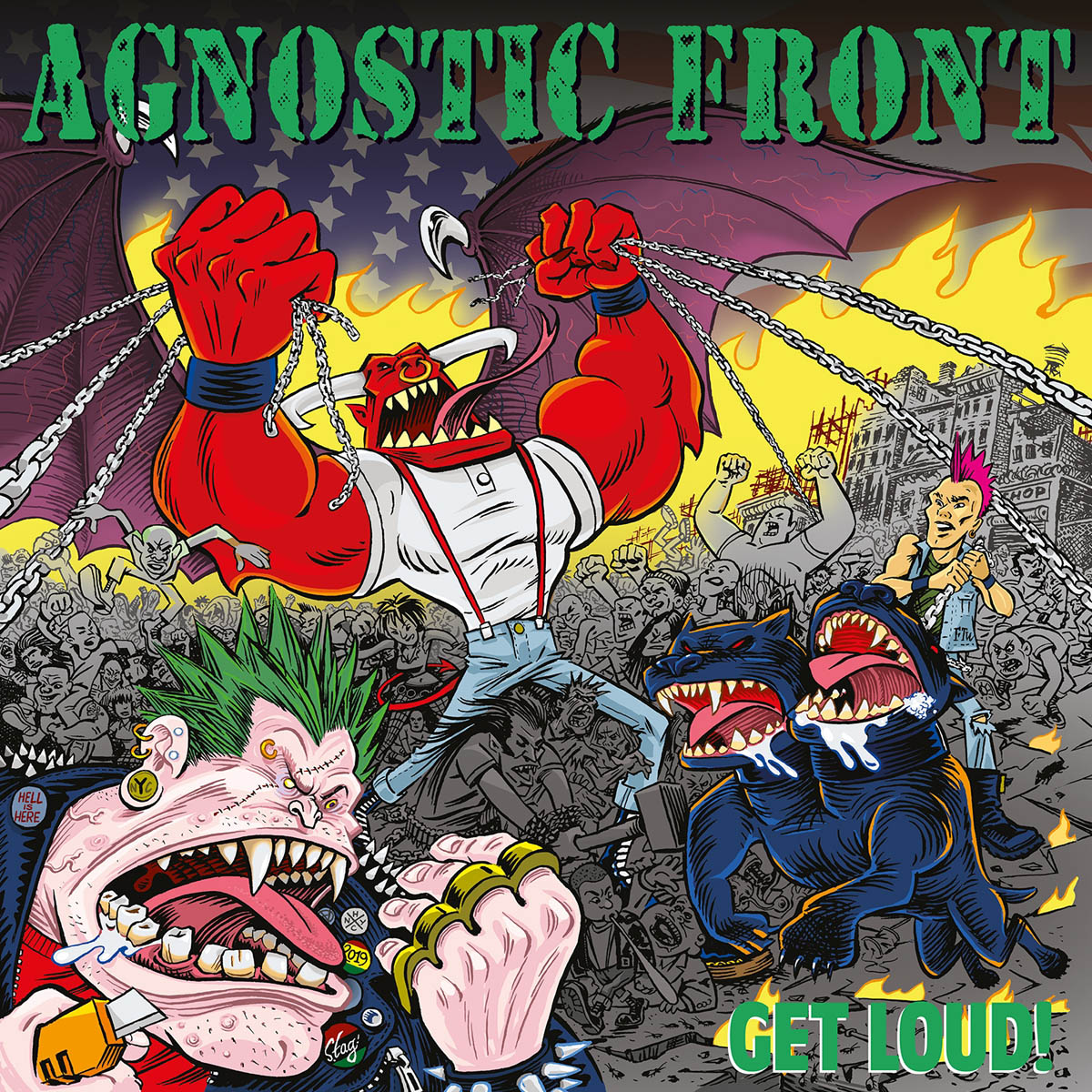 As an further ode to the band’s past, the song “I Remember” is the story of the band’s early days with “United Blood” and “Victim in Pain” when Miret starts “I remember Vinny [Stigma], me and you…” There is no denying the passion and sense of family that Miret, Stigma and Agnostic Front has had for nearly 40 years, and “Get Loud!” is a total return to that form. The album’s title track “Get Loud!” and first single “Spray Painted Walls” lay the conventional blueprint for the collection of concise and fist-thumping violent strain of hardcore. As is the custom, the album’s brief and hastier tunes include the jack boot straight punk “Urban Decay,” the glorious riff laden “In My Blood” and the speedy “Snitches Get Stitches,” with the band’s signature gang choruses.

Agnostic Front continues its relentless hardcore history, keeping true to its nostalgic formula. Like garden-variety rockers AC/DC, the band doesn’t mess with the approach that has made them the Godfathers of Bootboy Hardcore. “Get Loud!” doesn’t leave much to the listeners imagination, but perhaps that’s not the point. Hardcore has always been about creating a violent release of anger and frustration through riffs and words and would only be muddled down by elaborate songwriting. Agnostic Front coils up and, with little warning, strikes the listener with a mammoth “f**k you…and f**k your politics!”

"Get Loud!" is exactly what you would expect from the Godfathers of Hardcore: concise hardcore fused metallic punk anthems with the violent lyrical punch in the face gives a voice to life, and plight, on the streets. The album recalls all the energy of the band's classics "Victim in Pain" and "Cause for Alarm" with the modern production of "The American Dream Died." Miret and Stigma are true to form and will appeal to long time fans of the subgenre.