Reading might be a compulsion for a schooler, or a pastime for a retired person, but it’s one of the ultimate pleasures for many, and I proudly count myself in the latter group. Sitting at home after spending countless hours working in front of a computer, and leisurely turning the pages of a good book in the company of a smoking cup of tea: there’s a slice of heaven in that picture. I have always contemplated the idea of writing a book myself, and obviously since music is my sempiternal passion I’d say the category such empirical book will be filed under is pretty much unquestionable. However, becoming a writer is something you must be ready for, or better put: something you might need to be born to do.

When my friend Roie Avin, editor of the widely known online magazine The Prog Report told me he was writing a book about influential and ultimately significant progressive rock albums released between 1990 and 2016, my first thought was “I wouldn’t really want to be in Roie’s shoes right now”. Subjectivity is a constant and integral part of the human experience, and it clearly includes taste as a component of our perceptions about beauty and ugliness in art, and in this case music. Progressive rock fans tend to be merciless when it comes to prove opinions around why an album must be considered more momentous than another one, so how do you pull off writing a book, which obviously is going to tilt a bit about your personal likes and dislikes, while remaining unscathed? I was genuinely interested to see the results.

In the 70’s prog-rock sold hundreds of millions of records, epitomized by such classic, chart-topping bands as Yes, Genesis, Pink Floyd, Jethro Tull, and Emerson Lake & Palmer, along with such successors as Rush, Marillion, and Asia to name a few. However, as much as there is a consensus about the reputation of mainstream concept albums, spaced-out cover art, and crazy time signatures from the forefathers of the genre, reality is the popularity of prog-rock has continued to grow during the course of the last 15 years, and it is no longer the much-maligned category it once was: it has gained the respect that eluded it for decades, which makes a book like this a vastly overdue task. So, how did Roie’s first writing effort in such a polemic topic fare?

Dedicated to Roie’s mom who is no longer with us, the “Essential Modern Progressive Rock Albums – Images and Word Behind Prog’s Most Celebrated Albums 1990-2016” is an 8.5 x 8.5 inches perfect paperback book with a little over 280 pages. The printing is excellently done with firm and vibrant colors and easily readable typography. The table of contents provides a graceful look at the 54 chapters dedicated to each album, preceded by a discerning and meticulous 4 pages-long introduction written by the author, a section I certainly enjoyed. From the get go, and as you can infer from the word modern in the title as well as the date range, the “action” takes off in 1990, with Queensrÿche‘s “Empire”, purposely ignoring everything that happened in the prog-world before that year. We are plenty of books about the originators of the sub-genre, who needs another? Each album chapter features the album cover occupying the left page of the page spread with the title and the exact release date in the right side, alongside a short and informative introduction to the record in question. As you turn the pages your eyes dance over a plentitude of information, carefully balanced between gorgeous band photos, interviews and quotes from the artists themselves, release information of each record, the band’s lineup at the time of the release (plus guest musicians if any) and the album tracklist. As a formally trained graphic designer I felt really satisfied with the consistent layout, the somber color combinations in occasions resembling the tones employed in the album’s covers, and the clever placement of the hundreds of photographs scattered throughout. 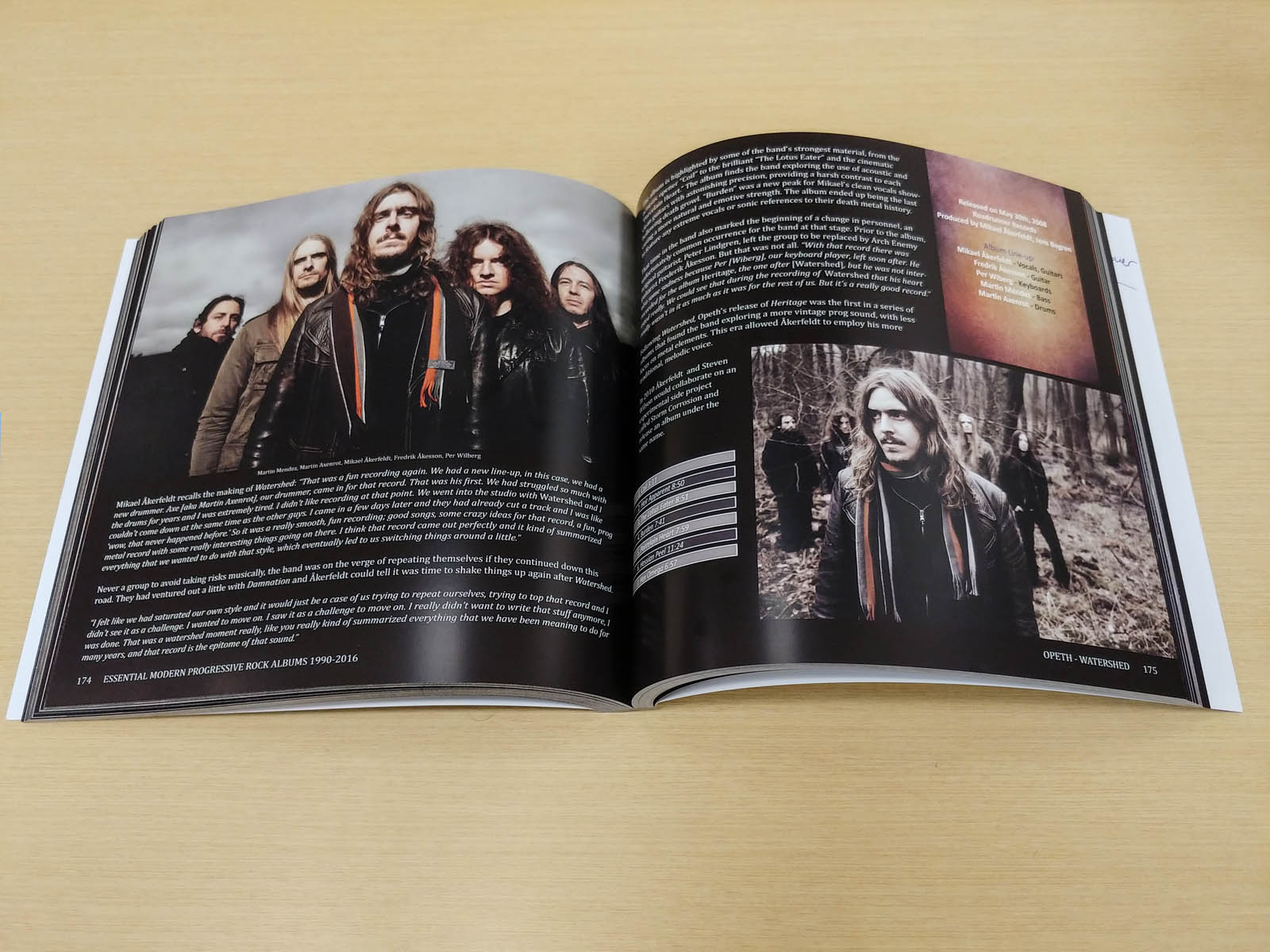 The chapter dedicated to Opeth’s Watershed

The contents progress chronologically, sometimes touching one album per year (Fates Warning’s “Parallels” is an example for year 1991) or including more than one in the same lapse of 365 days (2007 has a threesome with Porcupine Tree’s “Fear or a Blanket Planet”, Between the Buried and Me’s “Colours” and Neal Morse’s “Sola Scriptura”). Asked by my friend Thomas Hatton in an interview for Proglodytes about what was the criteria he used to select and decided which albums to include, Roie said: “Over years of listening to this music and talking to people, you learn which are the ones that resonated the most.  Even if something is not necessarily my favorite, but its immensely popular, I know it must be recognized. This book took that approach. I also have a select group of writers and colleagues whose opinions I trust immensely. So, you start with the obvious ones and then go through and figure out which ones really just can’t be excluded under any circumstances. That said, I know there is no way to please everyone and there probably will be some that disagree with the choices. Of course, we did not intend to slight any bands.  A line had to be made somewhere or the book would never get done and be over 2000 pages…”

Roie’s way of thinking and strategy sounds overwhelmingly logical, even when I might not necessarily agree with some of the records included in despite of others. As mentioned earlier writing a book will always be personal and subjective experience tailored to the creator’s mind, and I applaud his courage in putting together such wealth of material, one that took him nearly two years to gather. One colleague of mine who also received his copy told me a couple of days ago “I feel there are too many Neal Morse and Mike Portnoy albums in this book, how come ‘The Similitude of a Dream’ that has barely had the stretch to prove itself against the test of time, can be considered essential?”. To that reasoning, which I respect as you should with anyone’s opinion I responded: “Think of it this way: if a similar book had been written in the fall of 2000, would you have had an issue with Dream Theater’s ‘Scenes from a Memory’ being included? I granted that Dream Theater was more popular then than Neal Morse Band is now, so it naturally reached more people, but both albums were pretty much universally loved like crazy by the respective fan bases”

Precisely ending with the aforementioned Neal Morse Band record as the last album in the list, there’s an additional chapter entitled More Essential Albums, which is a compilation of other remarkable records from the same time period. You’ll find less widely known (and sometimes criminally underrated) yet incredibly great albums included there like Änglagård’s “Hybris”, Kevin Gilbert’s “The Shaming of the True” and Symphony X “The New Mythology” for example. While this final chapter doesn’t delve into the great details of its predecessors it adds even more variety to the overall selection of musical acts represented, and is one I consider a very appropriate and astute decision. 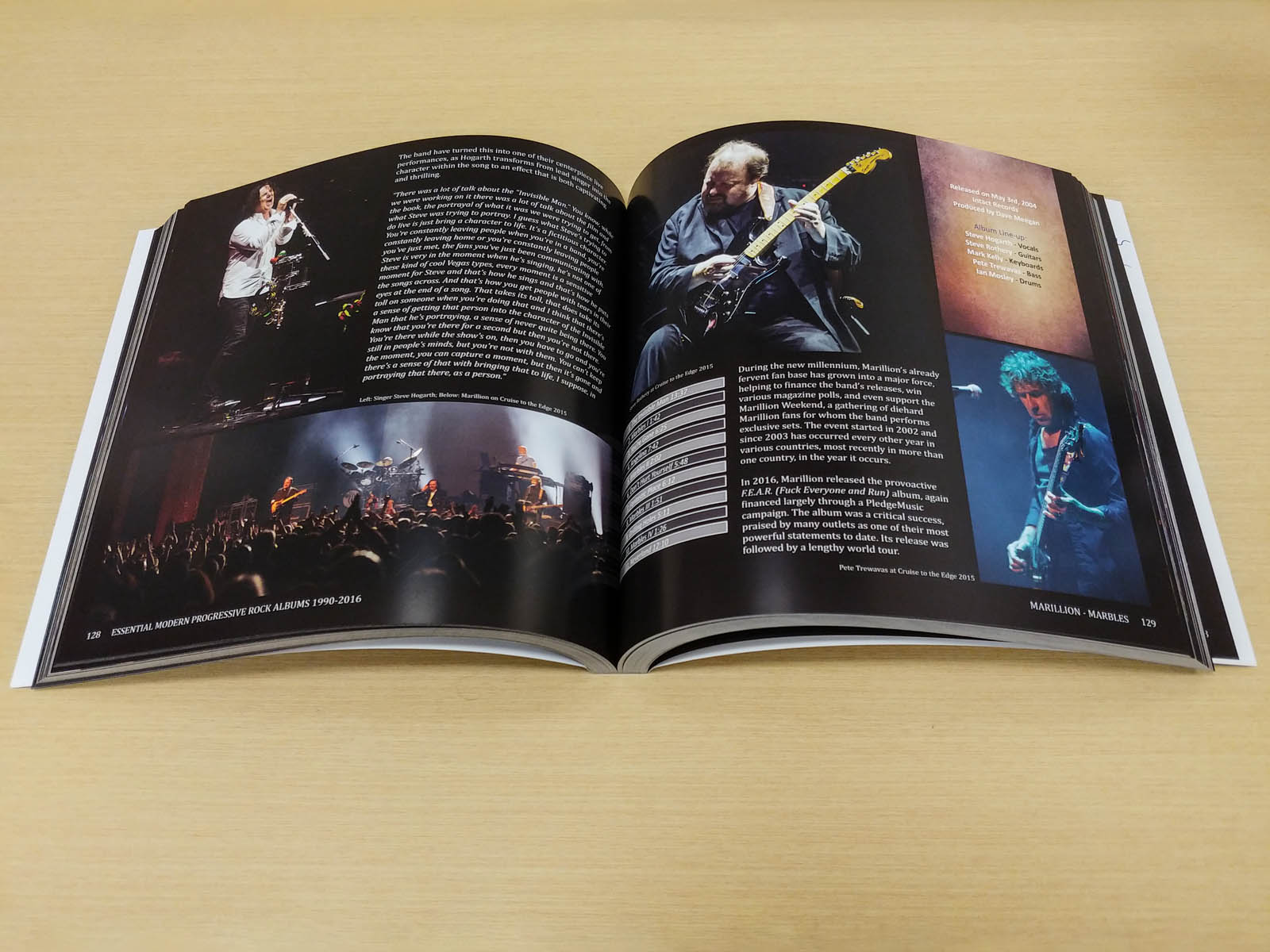 The chapter dedicated to Marillion’s Marbles

Full of excellent choices, with many of them veering into the prog-metal territories, “Essential Modern Progressive Rock Albums – Images and Word Behind Prog’s Most Celebrated Albums 1990-2016” is a book that ought to be placed in the hands of any person who shows the slightest interest in a serious reading regarding the raise of prog into a broader phenomenon across the shifting musical landscape of the last 30 years. Put together by a savvy and ardent progressive rock fan whose obvious passion for the music elevates the narrative, it exudes entertaining and professionalism at any turn of your eyes. Well done Roie Avin, you should feel proud of yourself.

You can buy this book straight from the author’s website at this location or from Amazon.