After what seemed like an eternity, MACHINE HEAD has announced their much anticipated North American tour celebrating the Burn My Eyes 25th Anniversary, on the heels of what is already shaping up to be one of the monster European/UK tours of 2019. The massive round of tour dates kick-off in Phoenix on Jan 16th in Arizona, and continue across Texas, Florida, New York, Toronto, Chicago, Denver wrapping up at the legendary Fox Theater in their hometown of Oakland, CA. on Feb 21st, and Anaheim, CA.

Building on their wildly popular ‘Evening With…’ format, these not-to-be-missed shows will be a three-hour musical extravaganza, comprised of two parts:

Part I – will feature a battery of MACHINE HEAD’s modern classics, such as ‘Imperium,’ ‘Halo,’ ‘Ten Ton Hammer’ and, ‘The Blood, The Sweat, The Tears,’ featuring frontman/guitarist Robb Flynn and bassist Jared MacEachern performing alongside two, soon-to-be-announced ragers on guitar and drums.

Part II – will feature the Bay Area titan’s classic debut album, “Burn My Eyes” played in its entirety for the first time ever.  And if somehow this historical event could not be monumental enough, taking the stage for this part of the set will be “Burn My Eyes” – era alumni and MACHINE HEAD’s original drummer Chris Kontos and original guitarist, Logan Mader.

Longtime band-leader, guitarist and frontman Robb Flynn tells us “North American Head Cases, you have been patiently waiting for what seems like for-goddamned-EVER, thank you for your patience, but we are now ready to CRUSH YOUR FUCKING SKULLS!!  So ready to get back on the road in the US. Biggest production we have ever had, most insane line-up we have ever had, we have leveled-the-fuck-up for this run! Ready to bring you 3 hours of blood, sweat, tears, pain, rage, and life-affirming metal.  Let’s fucking do this!!” 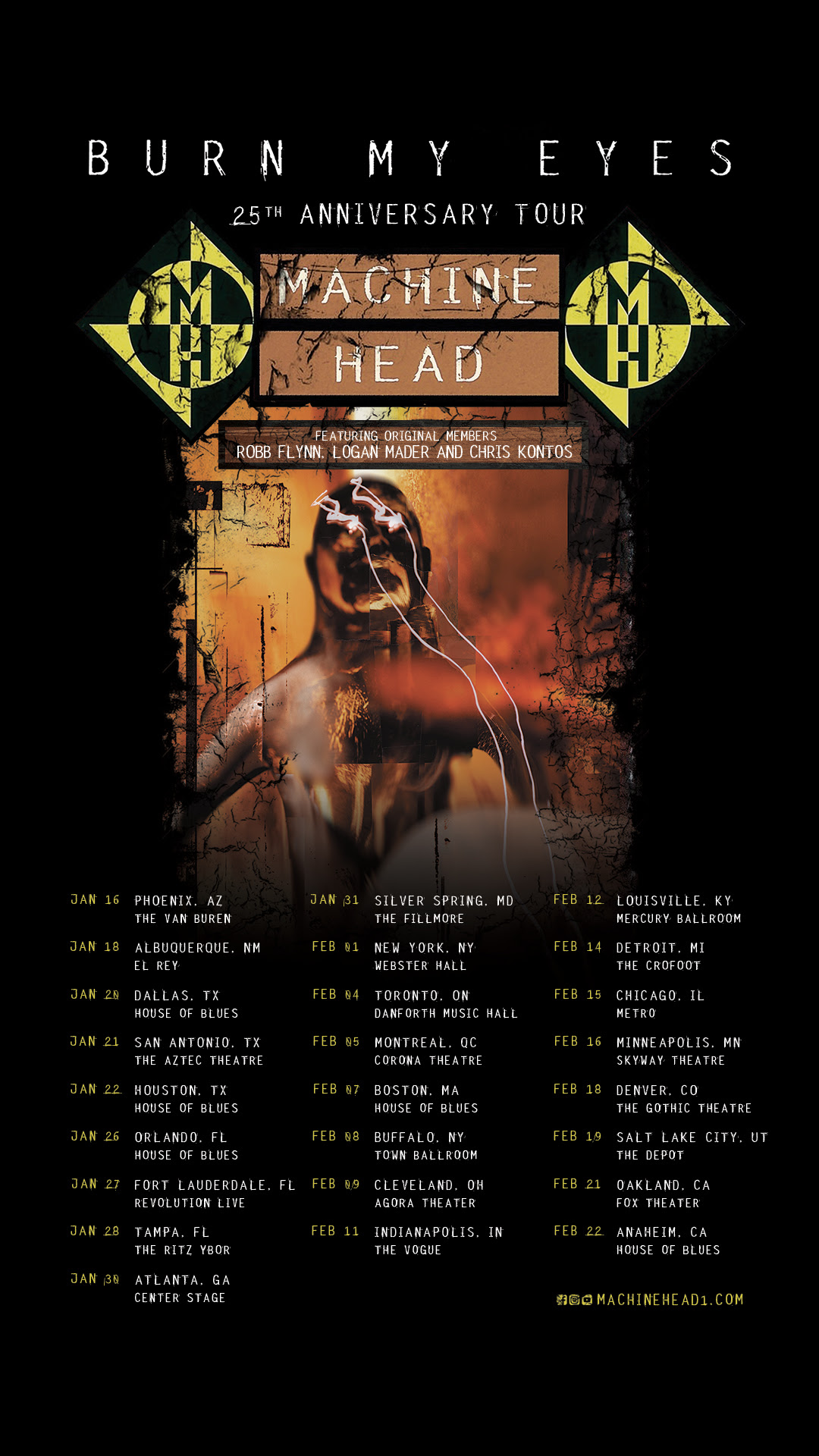 Jared MacEachern is equally looking forward to the run, saying, “North America! I promised you tour dates… well, your time has come!! Don’t you dare miss this special moment in musical history, as we pay 25 years of tribute to Burn My Eyes! The band is sounding tight as ever, and the spirits are high. Come relive your adolescent angst and rage with MACHINE HEAD!!”.

Logan Mader adds, “North America! We’re just now finishing rehearsals with full production in Germany for the first leg and holy sh*t… the sound, the lights, the feel and fire are epic beyond anything I’ve ever been a part of!!! Can’t wait to bring it to the USA and Canada aye! My brain is overloaded with excitement, emotion and adrenaline!!!”.

Chris Kontos echoes the sentiment, stating, “After 24 years have past since I having done any touring in the U.S. with Machine Head I’m so looking forward to bringing this incredible tour to the masses. I can honestly say, I think the U.S. “Head Cases” will be absolutely blown away by The BME 25th Anniversary tour. I can’t wait to destroy the states next year!!!!”

New shred-master-general Vogg Kiełtyka shares his new bandmates enthusiasm “It’s a huge privilege to be a part of this amazing tour. #BurnMyEyes25 tour reaches more and more places. After rehearsals and pre-production in Germany, I can confirm there’s no way you can miss out on this tour!!”

And new skin-pounder Matt Alston says “I’m so stoked to be part of the Burn My Eyes 25th Anniversary Tour – being on stage with Robb, Jared & Vogg; performing songs i grew up listening to and in front of thousands of HeadCases is just amazing! AND then being able to have my face melted by the BurnMyEyes show…it just doesn’t get much better than that!! We really can’t wait to be able to bring this tour to the Machine Head fans of North America! You’d be crazy to miss it, that’s for sure!”

An extremely limited amount of VIP packages will be made available to 30 Head Cases (per show) visit this link: