On February 21st 2020, legendary SAXON frontman Biff Byford will step into the spotlight with his first ever solo album, “School of Hard Knocks”. The English North is everything you saw in Game of Thrones and more. It is the true heart of England, the region where its soul resides, and Biff Byford has earned the right to be considered its true heavy metal bard. The lyric video for the album’s first single “Welcome to the Show” can be watched below and preorders will be available starting tomorrow at this location.

Biff takes on not just tales and stories from his heart and soul, but also investigates the Middle Ages and Medieval history amongst other subjects. “I’m singing about my past of course and about things I like, but mostly I wanted it to reflect me, my personality and my life,” says Biff. “Song-wise it’s more diverse and not just focused on heavy metal. I wanted it to be a slice of the music I like, from metal, to rock ‘n’ roll. I’m a guy who’s just as happy listening to Metallica or Judy Garland, because as long as it’s great and entertains me, then what more do I need?”

An aural Byford storybook highlighting his life and passionate interests, “School of Hard Knocks” is in all senses a classic, masterfully-constructed old school British hard rock album. From the spoken word introduction of ‘Inquisitor’ with its stoic, poetic take on the Spanish Inquisition to the autobiographical, old-school ‘Wheels of Steel’ era thrust of ‘Welcome to the Show’ and ‘School of Hard Knocks’, you’ll get to know Byford supremely well over the 11 tracks which comprise the album.

“One of my favourite is ‘The Pit and the Pendulum’, which is quite ‘prog metal’ and I love that,” says Biff “I’m a big prog rock fan and was a huge fan of Yes back in the day and being a musician-bass-player myself, the musicianship in bands like that really caught me. There’s a version of ‘Throw Down the Sword’ by Wishbone Ash, and the reason I did that was because it was the first song I ever heard that was anything to do with history in the sense of battles and war, and was really the thing which started me on the road to writing historically-driven songs.” 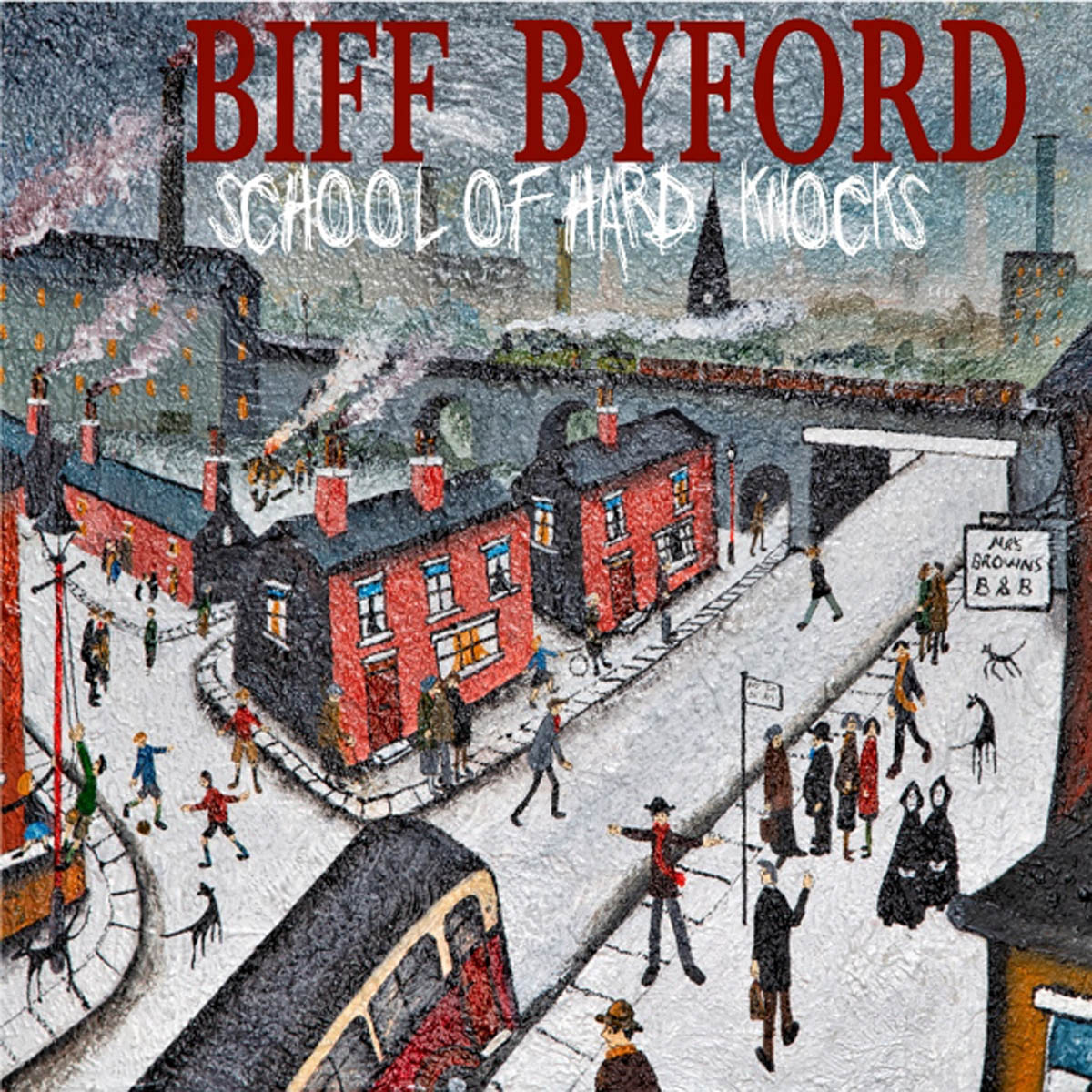 There is also a wonderful version of the Simon & Garfunkel classic ‘Scarborough Fair’, with Byford and Fredrik Åkesson (from Opeth) creating a new arrangement which gives the legend new life. “It’s a traditional medieval song, and the story goes that Paul Simon happened to hear somebody playing it in Whitby, which is just down the road from Scarborough,” laughs Biff, “But I wanted something which represented Yorkshire and it is a Yorkshire folk song, so we tried a new arrangement which made it a little heavier, and it works really well.”

Biff is also planning some live shows next year, events which will continue the theme of breaking new ground: “I’m going to do a ‘words-and-music’ tour in small venues,” he states proudly, “the first part will be me in conversation with the audience about anything really, from heart attacks to sex, drugs, rock ‘n’ roll, old times, new times, friends, enemies and whatever anyone wants to chat about… Then bringing out a band and playing some new songs, covers and maybe end with a Saxon song or two. I’m still working out the details, but it’s a show I’ve wanted to do for a long time and one which I don’t think has been done in hard rock before. It’ll be something different and a lot of fun.”

“School of Hard Knocks” not only achieves the goal of providing full bore entertainment, it fulfils a long-standing Biff Byford’s wish to explore rock ‘n’ roll a little more. “It’s been great to break new ground, explore new territories and work with some old friends,” concludes Biff, “and having waited so long to make this album, I have to say, I am delighted with it! It has a whole range of styles, from the ridiculously heavy to ballads, and it is certainly my album.”