The inaugural KNOTFEST AT SEA, part of the music and lifestyle phenomenon created by multi-platinum, genre defining metal band, SLIPKNOT, has gone on sale to the general public from KnotfestAtSea.com. Furthering the global expansion of the KNOTFEST experience, the inaugural voyage of the KNOTFEST AT SEA cruise will set sail from Barcelona on August 10th 2020 and will stop in Naples, Italy before returning on August 14th.

KNOTFEST AT SEA has also announced the first of the on board experiences that will be available to fans during the cruise. These include:

KNOTFEST AT SEA will be headlined by SLIPKNOT who will perform two sets on board the ship with the full line-up and more on board experiences still to be announced. For more info, head to KnotfestAtSea.com. 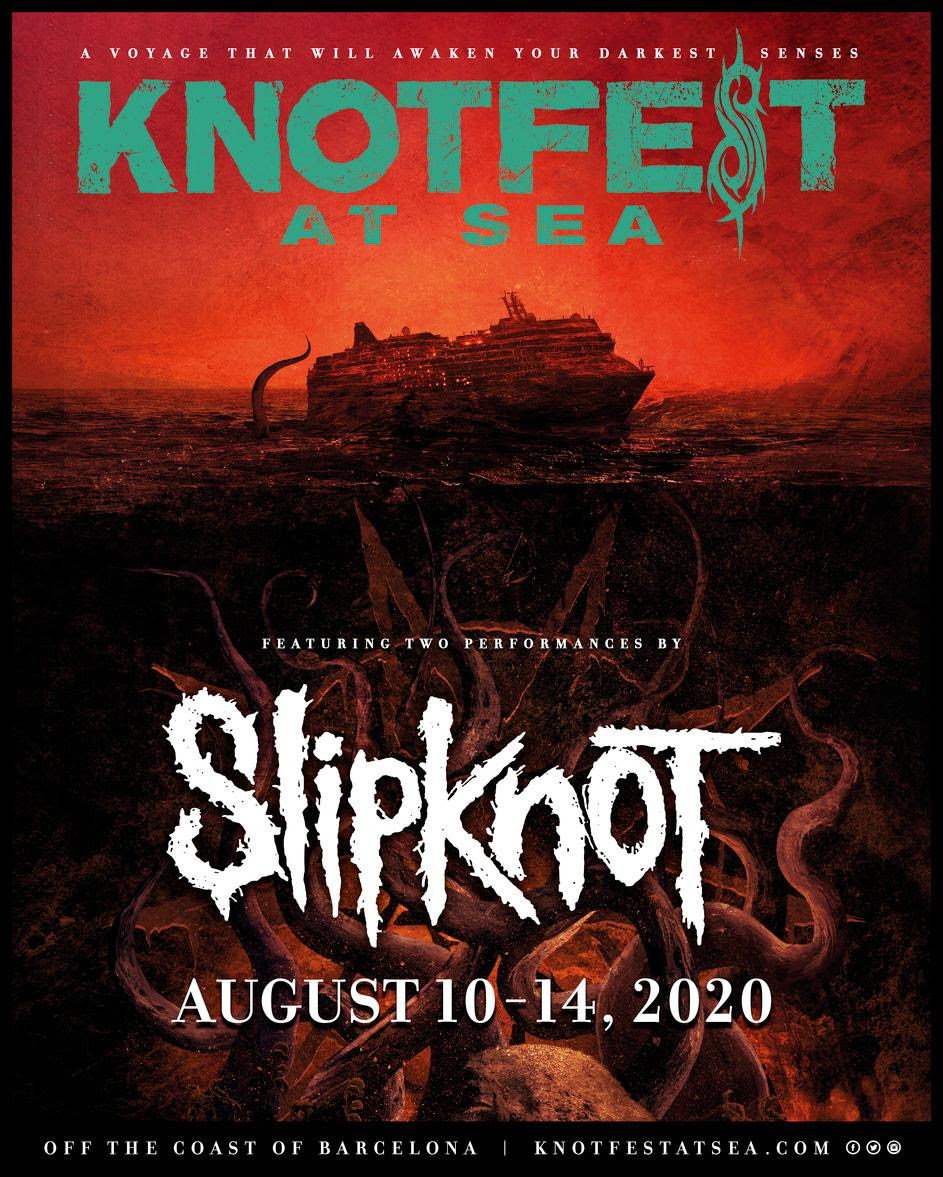 Earlier this week, KNOTFEST announced the first ever KNOTFEST UK, Aug 22nd, 2020 at the legendary National Bowl, Milton Keynes.  Members of SLIPKNOT’s official fan club, Outside The 9, will have a first access pre-sale that goes live on December 19th at 10am GMT; fans can join and get their passcode at outsidethe9.com. SLIPKNOT‘s headline performance at KNOTFEST UK will mark their first return to The National Bowl since their iconic performance at Ozzfest 2001. KNOTFEST UK full line-up and on-site activities will be announced early next year.

Since its inception in 2012, KNOTFEST has expanded into 5 countries – USA, Japan, Mexico, Colombia and this year, France when the inaugural KNOTFEST MEETS HELLFEST event sold out within weeks. As global demand grows for the unique culture and community that SLIPKNOT and their namesake festival represent, the KNOTFEST brand reaches ever further around the world.

KNOTFEST COLOMBIA saw its first ever headline performance from SLIPKNOT when it descended on Hipódromo De Los Andes in Bogotá this past Saturday. Fans from all over the country came to party with SLIPKNOT as they were joined by 16 other bands including Behemoth, Testament, Accept and W.A.S.P. 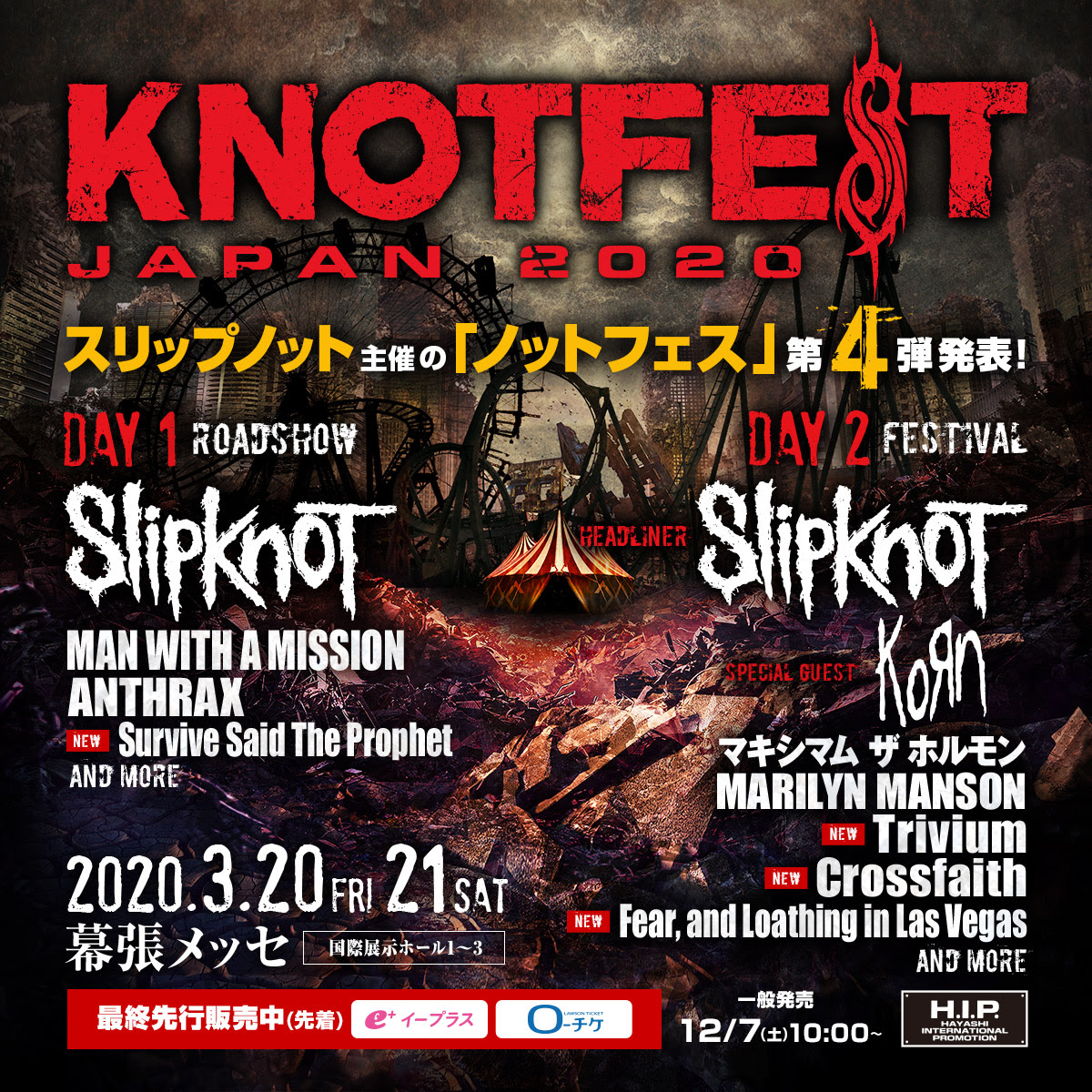 In 2020, KNOTFEST JAPAN will take place on 20th and 21st of March with both dates headlined by SLIPKNOT. Day 1 will be a KNOTFEST ROADSHOW event featuring Anthrax, Man With A Mission and more. Day 2 will be a full KNOTFEST festival day featuring Korn, Marilyn Manson, Maximum The Hormone, Trivium, Crossfaith and more. Tickets are available from KnotfestJapan.Com

SLIPKNOT will return to Europe for a headline arena tour in January 2020, where many of the shows sold out in a matter of hours and The O2 in London selling out in 8 minutes. Full dates and info on the European tour are available here. The European tour follows another historic first when SLIPKNOT hit the road this summer for the traveling KNOTFEST ROADSHOW tour. Hitting thirty cities across North America, with a brand new stage set and production, the tour saw SLIPKNOT play to the biggest North American audiences in their history. They also headlined US festivals Louder Than Life and Aftershock this fall.

Slipknot returned to the top of the ‘Billboard Top 200’ in August with the debut of their new album “We Are not Your Kind”, marking the GRAMMY® Award-winning group’s third consecutive #1 album on that chart. Furthermore, the album made an impact worldwide with #1 debuts in the United States, United Kingdom, Mexico, Australia, Canada, Japan, Russia Ireland, Belgium, Portugal and Finland, as well as Top 5 debuts in Germany, France, Norway, Italy, Austria, Sweden, Switzerland, The Netherlands, Poland, Spain and New Zealand.

“We Are not Your Kind” is highlighted by the current single “Nero Forte”, “Solway Firth,” and the LP’s first single “Unsainted.” The latter two have come with an M. Shawn Crahan directed official music video, and each has trended worldwide on YouTube (all videos, not just music) – “Unsainted” at #1 worldwide for a full 24 hours. Combined, videos for the new album have amassed over 87.2 million views in only three months. 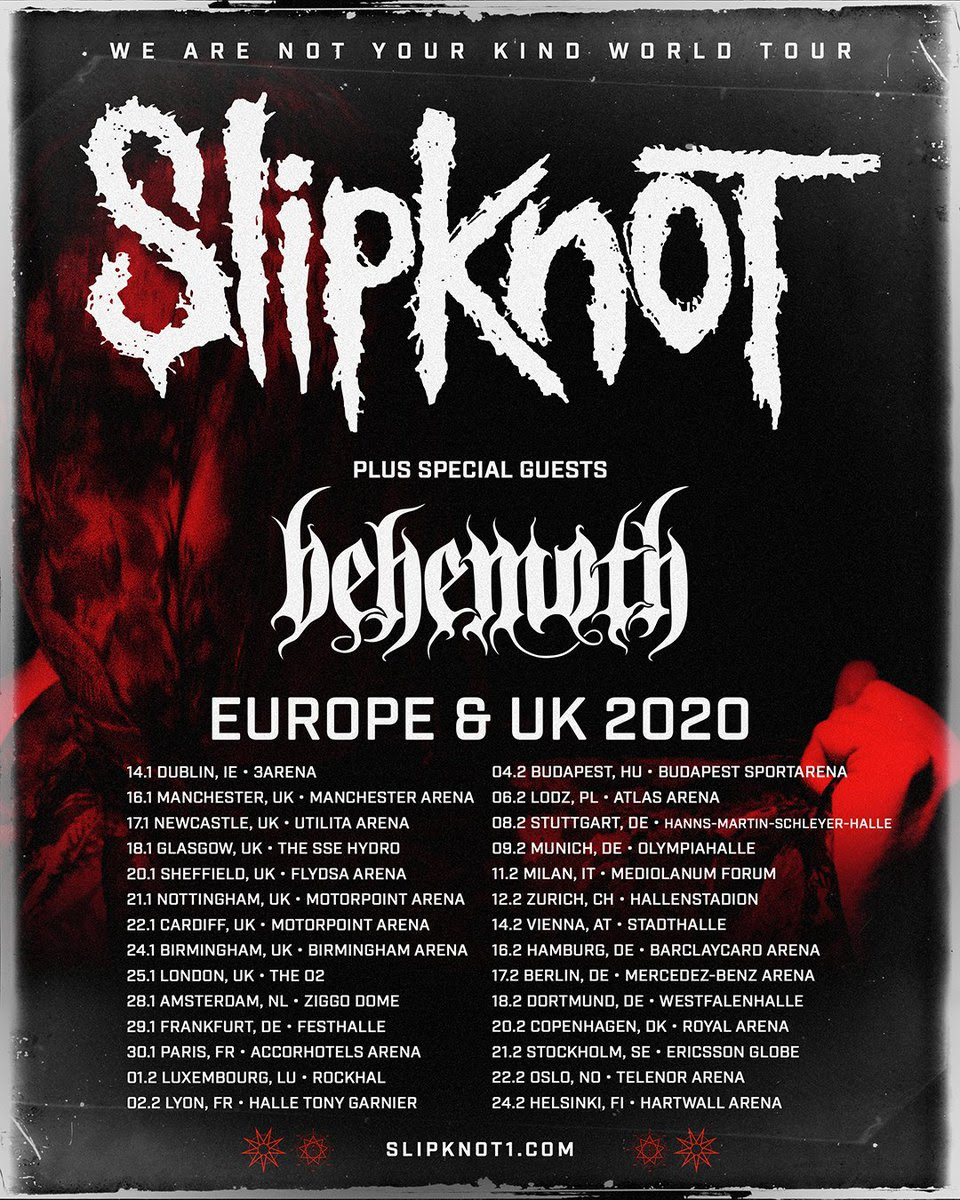 While “We Are not Your Kind” clearly resonated with rock fans on a massive global scale, it also tapped into universal demand for unapologetic and groundbreaking heavy rock across a diverse media landscape: NME called it “an astonishing record”, Forrbes called it “a Masterpiece”, The Fader proclaimed “Slipknot is a band whose music will always be relevant”, and Vice wrote “Slipknot have become a pop culture phenomenon.”.

“We Are not Your Kind” is currently staking its claim as one of 2019’s top albums, earning #1 album nods from Rolling Stone and Kerrang! in their year-end roundups, alongside additional “Best of 2019” accolades from Revolver, Consequence of Sound, Loudwire, Alternative Press and more.

Additionally, SLIPKNOT released its very own craft spirit, SLIPKNOT No. 9 IOWA WHISKEY, this past August. The band collaborated with Iowa-based Cedar Ridge Distillery, which was awarded Distillery of The Year in 2017 (American Distilling Institute), to produce the No. 9 and No. 9 Reserve Iowa Whiskeys. Made with corn from the Cedar Ridge farm in Winthrop, Iowa, these whiskeys celebrate the band’s own Iowa roots. The release included bottle signings along the SLIPKNOT headlined KNOTFEST ROADSHOW, leading to sell-outs across the country. The band recently released a limited number of special bundles featuring a limited edition signed whiskey colored vinyl of their critically acclaimed, chart topping album – ‘WE ARE NOT YOUR KIND‘ along with a bottle of SLIPKNOT No. 9 IOWA WHISKEY. Available from CraftShack.com 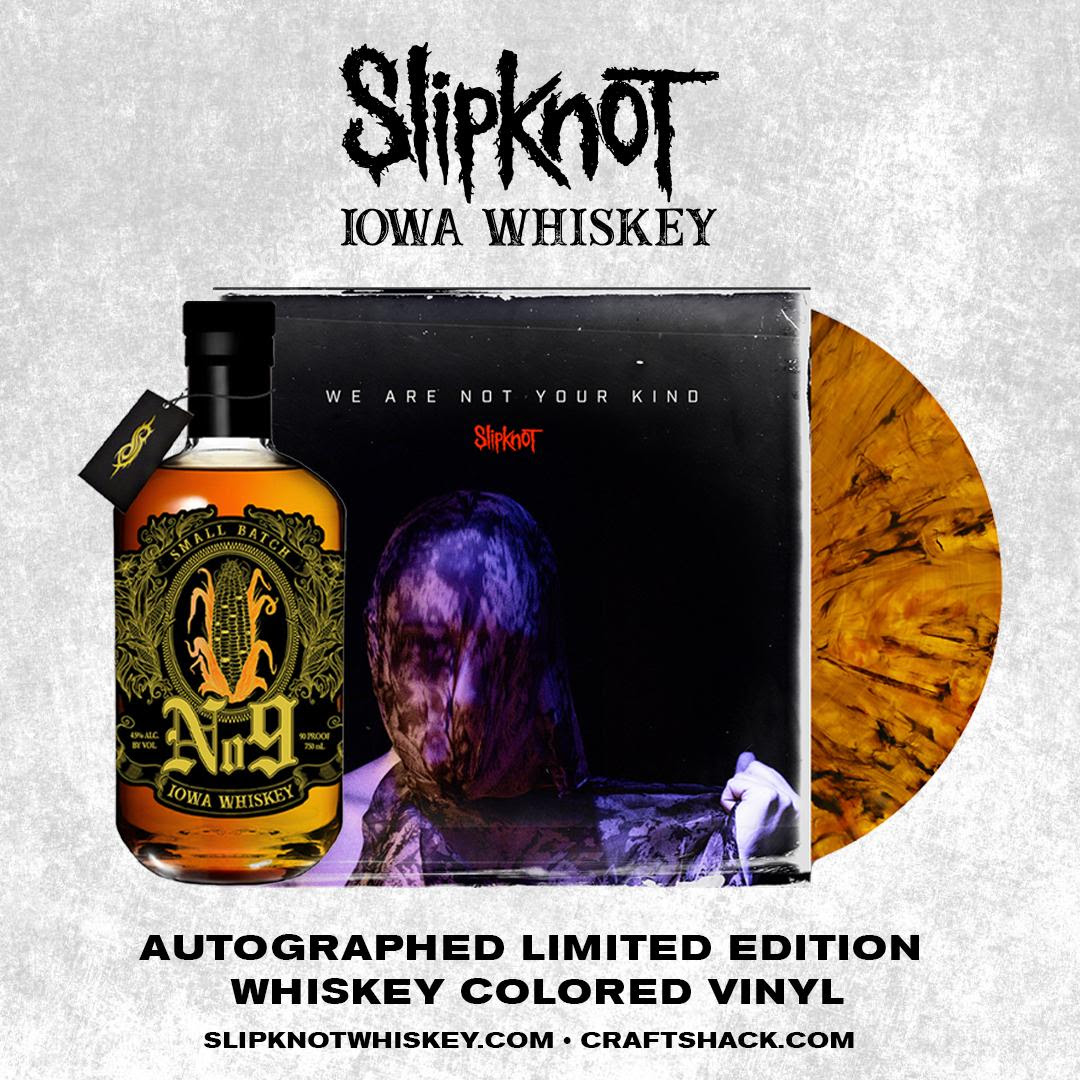