German thrash metal veterans DESTRUCTION have released a new video for the song “Betrayal”, taken from the band’s 17th studio album, Born To Perish, which will be released next August 9 via Nuclear Blast. The disc was recorded in January and February 2019 with V.O. Pulver (PRO-PAIN, BURNING WITCHES, NERVOSA) at Little Creek Studios in Switzerland and is the first DESTRUCTION album to feature Randy Black on drums and second guitarist Damir Eskic.

Director Achilleas Gatsopoulos comments on the “Betrayal” clip: “It was my honor to be entrusted by such a historic band to create a fresh visual aesthetic for their new album. It was important for me to strip things down and start with the basic raw and powerful visual elements that derive from their trademark logo: sharp angular shapes, high contrast and a monochromatic color palette of red, black and white. Inspired by Dario Argento‘s horror masterpiece ‘Suspiria’ as well as by the existential portraits of Francis Bacon and mythology, we create a dark tableaus of archetypal forms of betrayal: two-faced/deceit, back-stabbing, infidelity, garden of Eden, wartime snitch and we close with none other than the iconic kiss of Judas. It was an immense pleasure to work with the guys and I am really looking forward to next time. ‘Til then, enjoy the audiovisual onslaught that is ‘Betrayal’.” 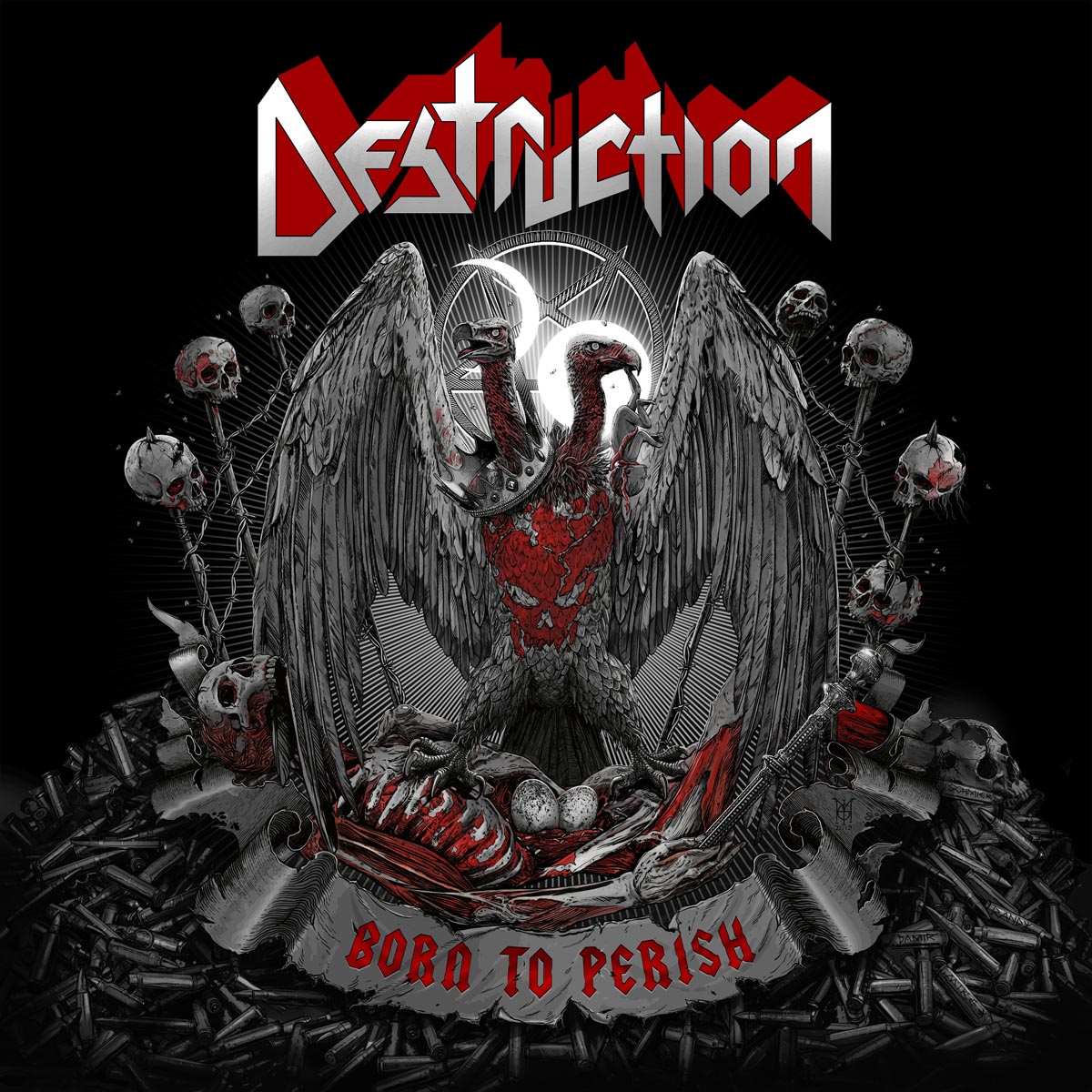 Says Schmier: “This is maybe my fave song from the new album ’cause of its classic thrash feel and the very catchy chorus. Randy is all guns blazing here and Mike and Damir have an awesome solo battle!  We all have our experience with ‘Betrayal’ and wanted an emotional, atmospheric and different video!”

Damir is a Swiss guitar player of Bosnian decent who works as a guitar teacher, himself being a former pupil of Tommy Vetterli (CORONER). He also plays in a heavy metal band called GOMORRA and previously contributed three solos to DESTRUCTION‘s 2016 album Under Attack. DESTRUCTION previously played with two guitarists in the late 1980s (with the addition of Harry Wilkens) and then again throughout much of the 1990s (Michael “Ano” Piranio).

The cover artwork for “Born To Perish” was created by acclaimed artist Gyula from Hungary, who has also worked with ANNIHLATOR, GRAVE DIGGER, STRATOVARIUS, TANKARD and many more.