Two of the biggest bands in heavy metal – MEGADETH and LAMB OF GOD – will be joining forces on a co-headline tour across North America this year, presented by SiriusXM. And to add to the firepower of this already formidable tour, Trivium and In Flames are joining, making this THE must-see heavy music package of the year. Tickets will go on general sale Friday, February 14th from LiveNation.com. Tickets and VIP packages for all four artists go on sale to the general public beginning Friday, February 14th at 10am local time at LiveNation.com.

MEGADETH, fueled by Dave Mustaine’s triumphant return to the stage following his diagnosis and recovery of throat cancer, will embark on their first North American tour since 2017. Speaking on the epic announcement, MEGADETH’s leader and front-man, Dave Mustaine says: “Hello me! I’m back again, better than ever and coming to a town near you with Lamb of God, Trivium and In Flames. If you want high octane metal madness this is the tour for you.”

LAMB OF GODreleased their first new music in five years last week with the single “Checkmate”. The track is the first to be released from the band’s self-titled eighth studio album, due out May 8th, which is one of the most anticipated and important metal records of the year. Commenting on their upcoming co-headline run, Mark Morton, lead guitarist of LAMB OF GOD, adds: “The world has never needed heavy more than it does today and top to bottom, this tour delivers! Lamb Of God has toured with and been friends with all of these bands for years, but for all of us to be on the same bill is something extra special. Come early and stay late. This is THE metal tour of the year.”

TRIVIUM’s Matt Heafy adds: “We are happy to be a part of the biggest real metal tour of the year.This tour is the main event and represents heavy metal and the culture that goes with it.“

With IN FLAMES singer, Anders Fridén stating: “We were honored to be asked to join this package. We were actually supposed to take this Summer off, but of course we couldn’t say no. After playing shows with all of these guys for years, 2020 is going to feel like a kick ass reunion. See you on the road, Jesterheads!”

Produced by Live Nation, this epic 55-city tour will stretch across summer and fall, kicking off June 12thin Bristow, VA and hit every region of the U.S. before wrapping November 13thin Reno, NV. Multiple Canadian shows are scheduled as well. See full itinerary below.

MEGADETH is currently on the road in Europe as the support act for FIVE FINGER DEATH PUNCH. The trek kicked off on January 20 in Helsinki, Finland and will conclude on February 22 in Sofia, Bulgaria.

LAMB OF GOD‘s new, self-titled album, will be released on May 8 via Epic Records in the U.S. and Nuclear Blast Records in Europe. The follow-up to “VII: Sturm Und Drang” will mark LAMB OF GOD‘s first recordings with Art Cruz, who joined the band last July as the replacement for the group’s founding drummer, Chris Adler. 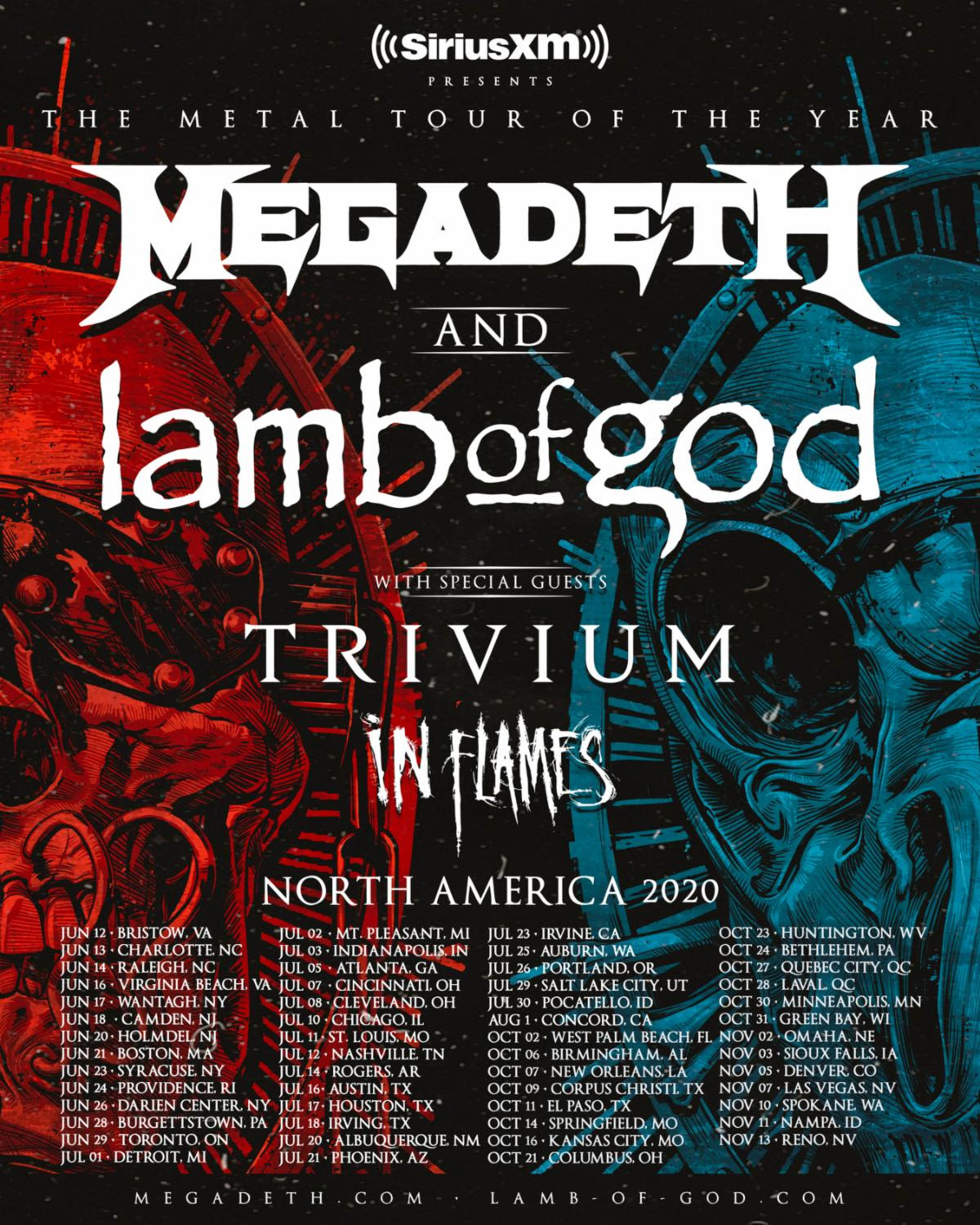