Brazilian/Dutch death metal band CRYPTA will release its debut album, “Echoes Of The Soul”, on June 11 via Napalm Records. The album can be pre-ordered at this location.

Formed in June 2019, the four-piece consists of vocalist and bassist Fernanda Lira and Luana Dametto on drums (both former members of Brazilian thrash metallers NERVOSA), plus supremely talented guitarists Sonia Anubis (COBRA SPELL, ex-BURNING WITCHES) and Tainá Bergamaschi (ex-HAGBARD). They enforce a heightened level of potency and experience from their successful past and current projects, enhancing influences from both classic and modern death metal genres, plus significant extreme and black metal elements, to create a sound of their own.

Positioned right at the burning gates of death metal salvation, their first single and music video, “From The Ashes”, already showcases the demonic, captivating power of the hard-hitting combo.

Lira says about the first single: “The song is basically about the well-known tale of the phoenix, but in a more philosophical sense. It talks about the ever-changing cycles of life, about the many endings and beginnings we have to go through, about how many old versions of ourselves need to figuratively die in order for us to keep growing and evolving as human beings, and finally, about building resilience to endure all these rebirths.”

The first audiovisual work immediately takes the viewer into the funeral spectra of CRYPTA‘s universe and also reveals full commitment on a cinematographic level. The track itself is an infernal omen of the album’s sinister stories and already presents a first spark of their impressive interplay: Lira‘s forceful vocals, Anubis and Bergamaschi‘s bold axe attacks and Dametto‘s prominent sophisticated drumming summon the phoenix to rise from the ashes — with the last crackle of this debut full-length conjuring screams for more.

André Gustavo, movie director at O2 Filmes, states: “I believe the song perfectly matches the current moment we’re living, during which all humanity needs to reinvent itself and be reborn ‘From The Ashes’. The videoclip preparation itself can also be translated through it: building up such a big production during this terrible moment we’re living was a big challenge to all of us. I believe, for all of that, from the creative and cinematographic perspective, we had a great final outcome for the video”.

“Echoes Of The Soul” was recorded in January 2021 at the Family Mob Studio (Brazil), mixed by Arthur Rizk (CODE ORANGE, POWER TRIP) and mastered by Jens Bogren (OPETH, DIMMU BORGIR, SEPULTURA). The cover artwork was created by Wes Benscoter, who is internationally famous for his stunning covers for bands such as SLAYER, KREATOR, BLACK SABBATH and many more. 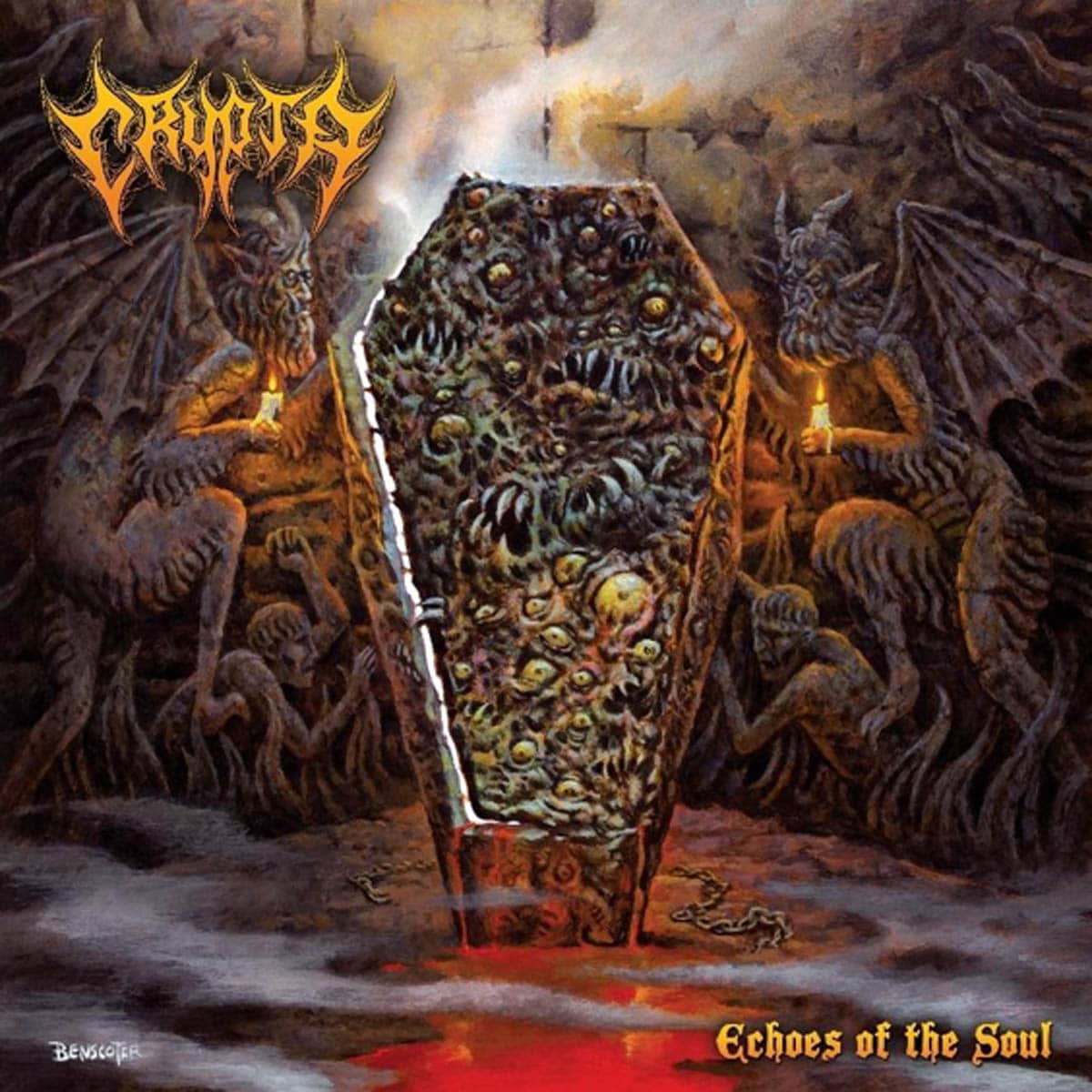 “Echoes Of The Soul” Album Artwork

Atmospherically dark and threatening, the 55-second intro “Awakening” prepares the listener for the oncoming ferocity of “Echoes Of The Soul”, dispensing murky, fiery fuel into the death metal machine. Their significant sonic texture derived from various death metal subgenres and traces of classic thrash becomes instantly evident as the album begins, reflective of the entirely vicious, infernal aura the 10-track debut is about to unleash. CRYPTA unbridle high-powered sonic demons and nourish cumulative, explosive energy with raging guitar riffs, Lira‘s unmistakable vocal color and Damettos‘s menacing drums. Tracks like “Starvation”, “Kali” and “Blood Stained Heritage” incite an uncontrollable storm of pure rage and belligerence, while offerings like “Under The Black Wings” and “Dark Night Of The Soul” deliver a message of pure hardness in perilous atmosphere. “Death Arcana” provides its listener further insight into CRYPTA‘s sonic mastery and captivates with sprawling solos reminiscent of earlier times, yet spiced with a modern twist.

“Echoes Of The Soul” track listing: