After a killer spring string of new festivals with Epicenter and Sonic Temple, Danny Wimmer Presents is are returning to their hard rock/alternative roots with the return of Louder Than Life, the World’s Largest Rock ‘N’ Roll Whiskey Festival, happening in Louisville, KY even bigger and better in its fifth year, with festival producers delivering the most spectacular music lineup since the festival began in 2014. Louder Than Life will feature the Danny Wimmer Presents debut of quintessential rock band Guns N’ Roses (in their first appearance since performing in Hawaii in December 2018), the return of chart-topping, festival favorites Slipknot and Disturbed, a reunited Staind (in their first public performance in 5 years), Godsmack, Rob Zombie, A Day To Remember, Ice Cube, Marilyn Manson, Breaking Benjamin, Chevelle, Halestorm, and many more.

The festival will be held at its new home at Highland Festival Grounds at KY Expo Center on Friday, September 27, Saturday, September 28 and Sunday, September 29, featuring more than 50 music acts, with performances on three stages, along with award-winning bourbons, whiskey, spirits, craft beer, and the best food Louisville has to offer. Festival attendees will also enjoy a variety of onsite food and beverage experiences, as well as sponsor activations that celebrate the bourbon culture and culinary heritage of this unique American city.

But music isn’t the only thing going on at the festival. Patrons will be able to check out over a dozen different experiences, including the awesome F.Y.E Experience, the acoustic Zippo Sessions, and the Music Experience. Fans of adult beverages will be happy too, as DWP will have the biggest lineup of bourbon, and whiskey experiences at a rock festival to date. Metallica’s Blackened Whiskey and Enter Night Pilsner will be onsite with a unique festival experience that fans will truly not want to miss. The festival centerpiece will be Kroger’s Big Bourbon Bar presented by Louisville Courier Journal, which will feature more than two dozen hand-selected bourbons from the best distilleries in the country, which will offer guests an opportunity to taste over 10 different cocktails from brands like 1792, Barrell Bourbon, Four Roses, Wild Turkey, and so many more yet to be announced.

One of my absolute favorite pieces of any DWP produced festival is the local food companies that are on-site, and boy will there be a ton of great ones here. Southern Hospitality Concessions LLC will be featuring Boss Hog BBQ, Ehrler’s Ice Cream, Heine Brothers Coffee, and so many others!

Though the festival will surely have lots of non-music offerings, the music is what will bring people in first and foremost, for good reason. Even Danny Wimmer himself had something to say about one of the headlining artists: “There are only a handful of bands through the years whose music not only resonates with fans, but changes the entire face of rock ‘n’ roll. Guns N’ Roses is one of those true icons, every year we want to come back bigger and better, and we can’t wait to welcome Axl, Slash, Duff and the rest of GN’R to the Louder Than Life stage.”

Ticket prices for Louder Than Life are as follows:

Camping spaces for cars, tents, and RVs start at just $145.00 and include 4 nights’ stay in the Louder Than Life campgrounds. Camping passes also allow patrons re-entry privileges to and from the festival site all weekend long.

The Highland Festival Grounds At KY Expo Center are located at 937 Phillips Lane in Louisville, Kentucky. Festival doors open at 11:00 AM daily.

Louder Than Life is produced by Los Angeles-based Danny Wimmer Presents, one of the largest independent producers of destination music festivals in America. Additional DWP events include Aftershock Festival, Bourbon & Beyond, Chicago Open Air, Epicenter Festival, Hometown Rising, Rock Allegiance, Sonic Temple Art + Music Festival, and Welcome To Rockville. DWP has even chosen the two most badass ladies to handle the press of the festival, as Kristine Ashton-Magnuson (publicist for all of the major DWP festivals) and Selena Fragassi (publicist for bands such as Slayer, Anthrax, and Greta Van Fleet) lead the team who will help facilitate the press on and offsite.

For more information on Louder Than Life please visit: 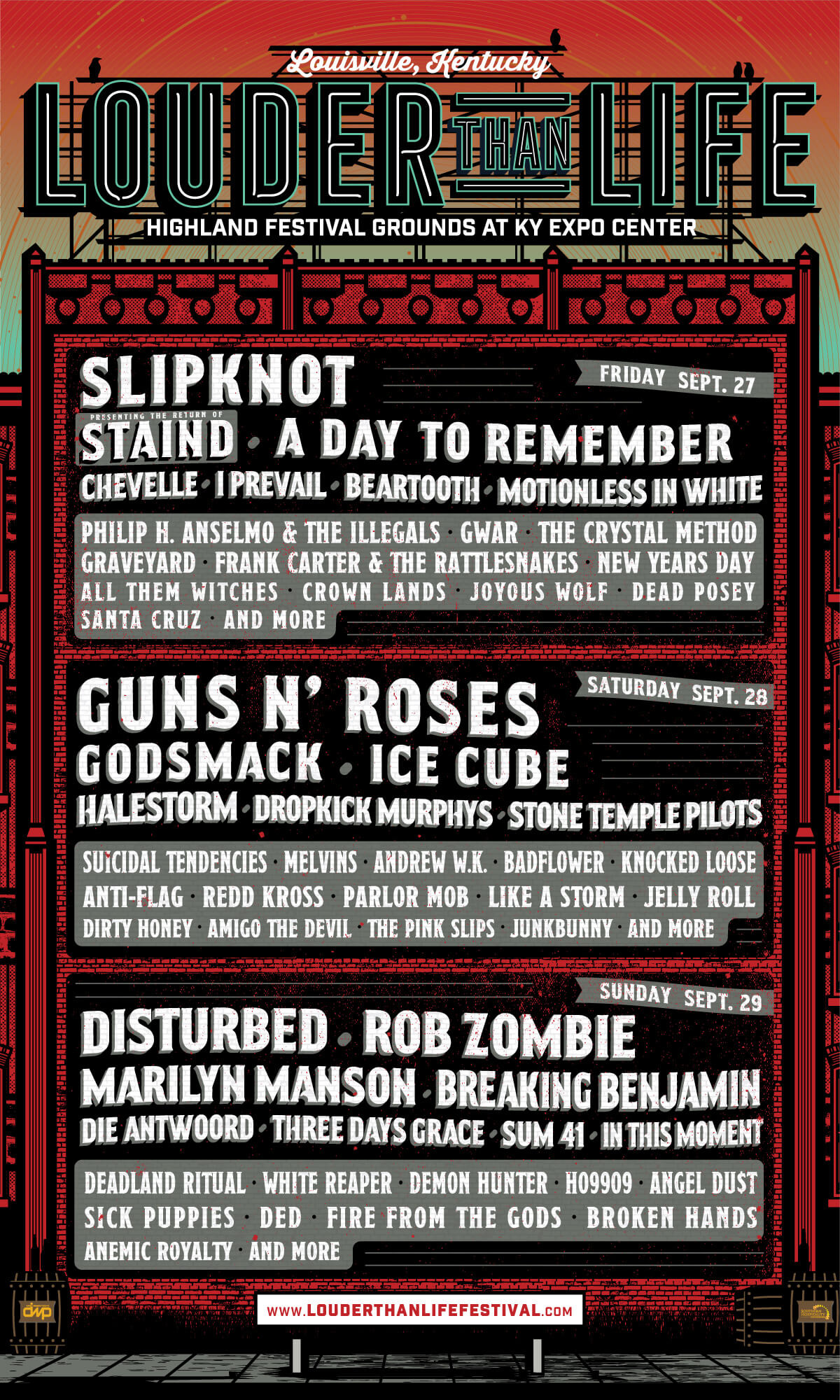