A concert hall…in a church? A self-named festival called…Morsefest? Complex albums played in their entirety cover to cover…for one time only? All in the anti-progressive rock mecca of…Nashville? If ever there were reasons for a weekend festival *not* to work, Neal Morse’s festival Morsefest, has a boat load of them. And yet, here we are, having just completed Morsefest number FIVE. There must be something… blessed… about this event.

No one expected what Neal would introduce as this year’s centerpiece. The Spanish Inquisition would have been more likely. Like a hidden manuscript long-since forgotten, Neal delved into his back treasures to see what was calling to be brought forth. He eventually chose to resurrect nine year-old demo’s of a musical he had partially written called Jesus Christ the Exorcist. The demo’s needed reworking, so there was much to do before he could even think about rehearsals. This was not a polished, road-tested performance like The Similitude of a Dream had been the previous year. In some ways, to pull this off would take… a miracle. 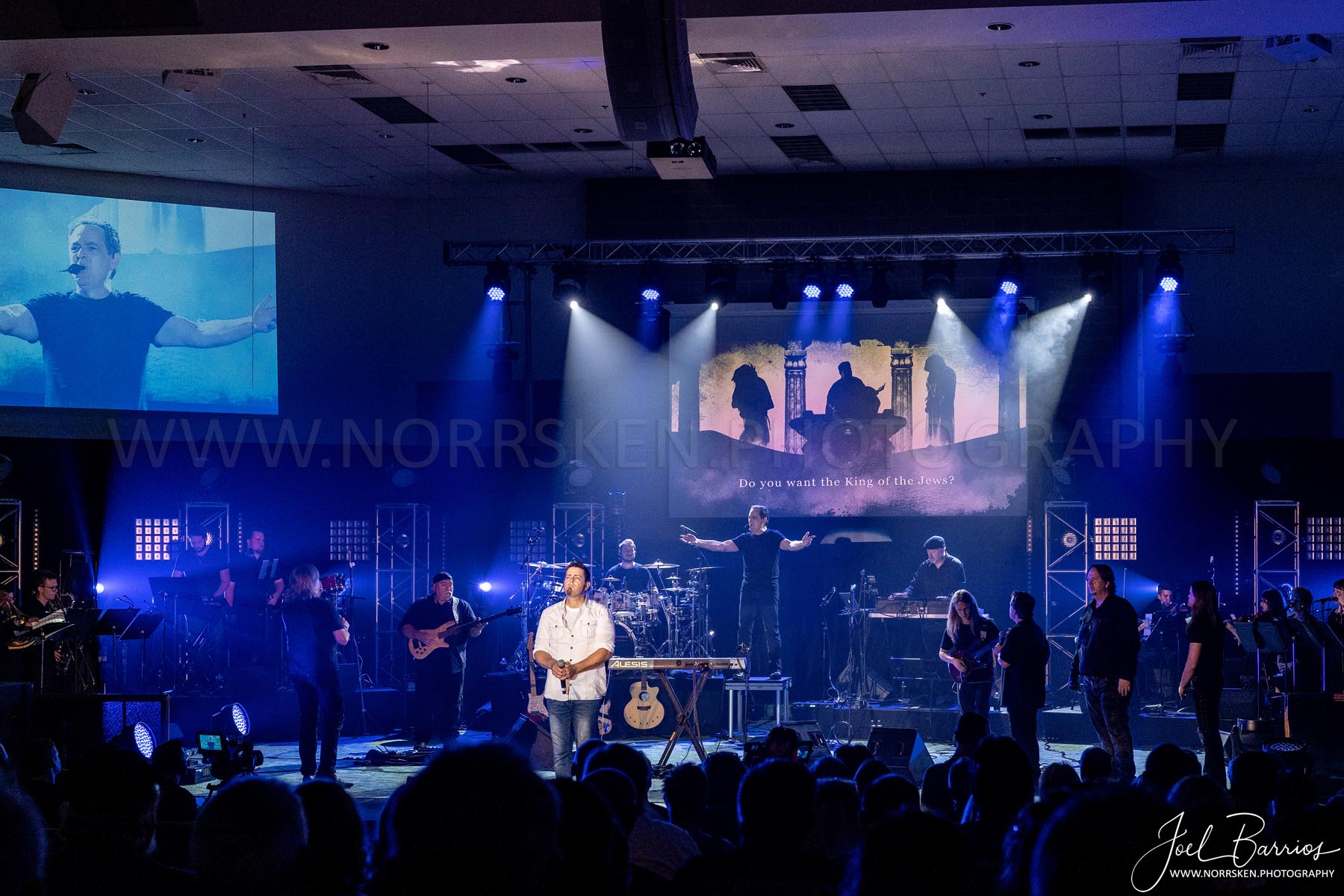 The final moments of the Jesus Christ – The Exorcist performance

Fast forward to this past weekend and we have the result of the hard work of dozens upon dozens of musicians, lighting crew, sound engineers, choir members and additional volunteers. The proceedings started off a little more loosely (relatively speaking!) with a Friday night “Storytellers concert” aptly dubbed Voices of the Beard (not quite unplugged, but in that direction) of Spock’s Beard material and other songs, led by the three lead singers of that band: Neal, Nick D’Virgilio and Ted Leonard. Having all three Spock’s men together is a very rare treat. First, consider that a band who has endured the changing of their lead singer three different times over two decades, actually has singers who still love each other and get on famously! Unheard of. Second, the three voices are all distinct but work brilliantly together: the power of Ted, the perfection of Nick and the genuine feeling of Neal. Together, singing three-part harmony, is Beard bliss. Although Nick was playing a smaller drum kit and guitarist Eric Gillette & bassist Randy George were seated as they played – along with Bill Hubauer on keys – there were some pretty full-on arrangements of songs like “Day For Night” and “The Doorway”, which were rockingly epic. “The Doorway”’s piano intro was played by a special guest – Nick’s young nephew Dominique, who nailed it! All three Spock’s Neal-era ballads were played: “June”, “Goodbye to Yesterday” and an especially poignant “Distance to the Sun”. Amazing harmonies! There was a looseness to the evening, too, such as celebrating the event’s official photographer/designer Joel Barrios’ birthday that night by singing the traditional birthday tune, and then a call for the Beatles’ version led to the group spontaneously going for it, totally unplanned and unrehearsed. It was perfection, especially the three-part harmonies! At the end of “Goodbye to Yesterday”, Neal decided to sing one verse of “Lay it Down” and end it there. But the crowd wouldn’t have it, they demanded the whole tune, and so Neal searched his memory banks to sing the whole thing. The other covers were fun, such as a killer version of “Walking on the Moon” with Nick channeling Sting’s vocals while playing Copeland’s drum part, and the rest of the band taking extended solos. A special Kansas section was also stellar, especially in the vocal department during “Carry On My Wayward Son”, with added guest Jake Livgren wowing us with “Dust In The Wind”. What an incredible night! 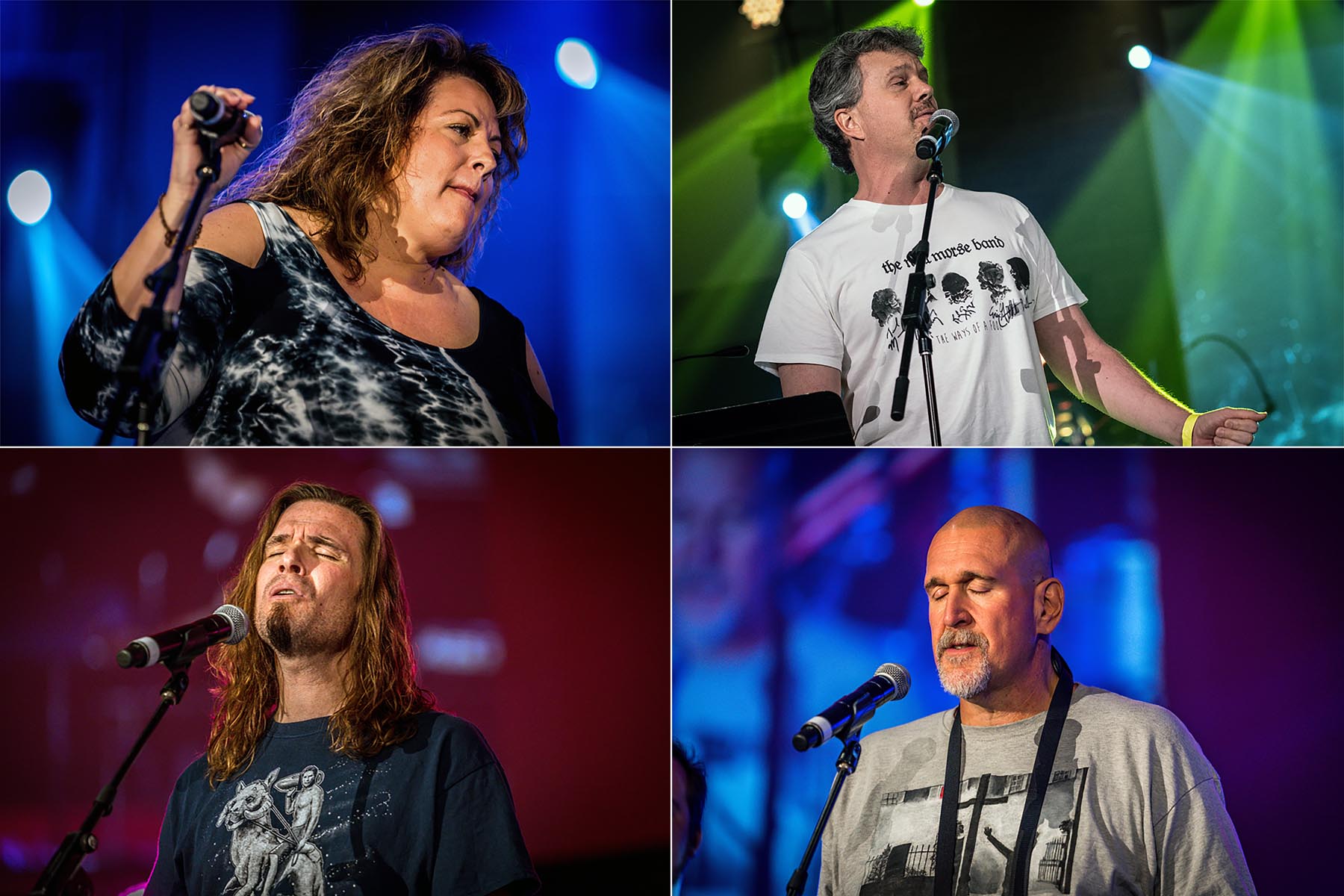 The Inner Circle concert on Saturday, for those who support Neal with a monthly subscription, is a more acoustic affair most years, lending an intimate feeling that permeates the crowd. Neal started with a couple of solo numbers, and then opened it up to be joined by several Inner Circle members who had submitted auditions the week before. Speaking as one of the singers, I can say it was an incredible joy to get to sing on stage with Neal, and the audience was very warm and supportive. 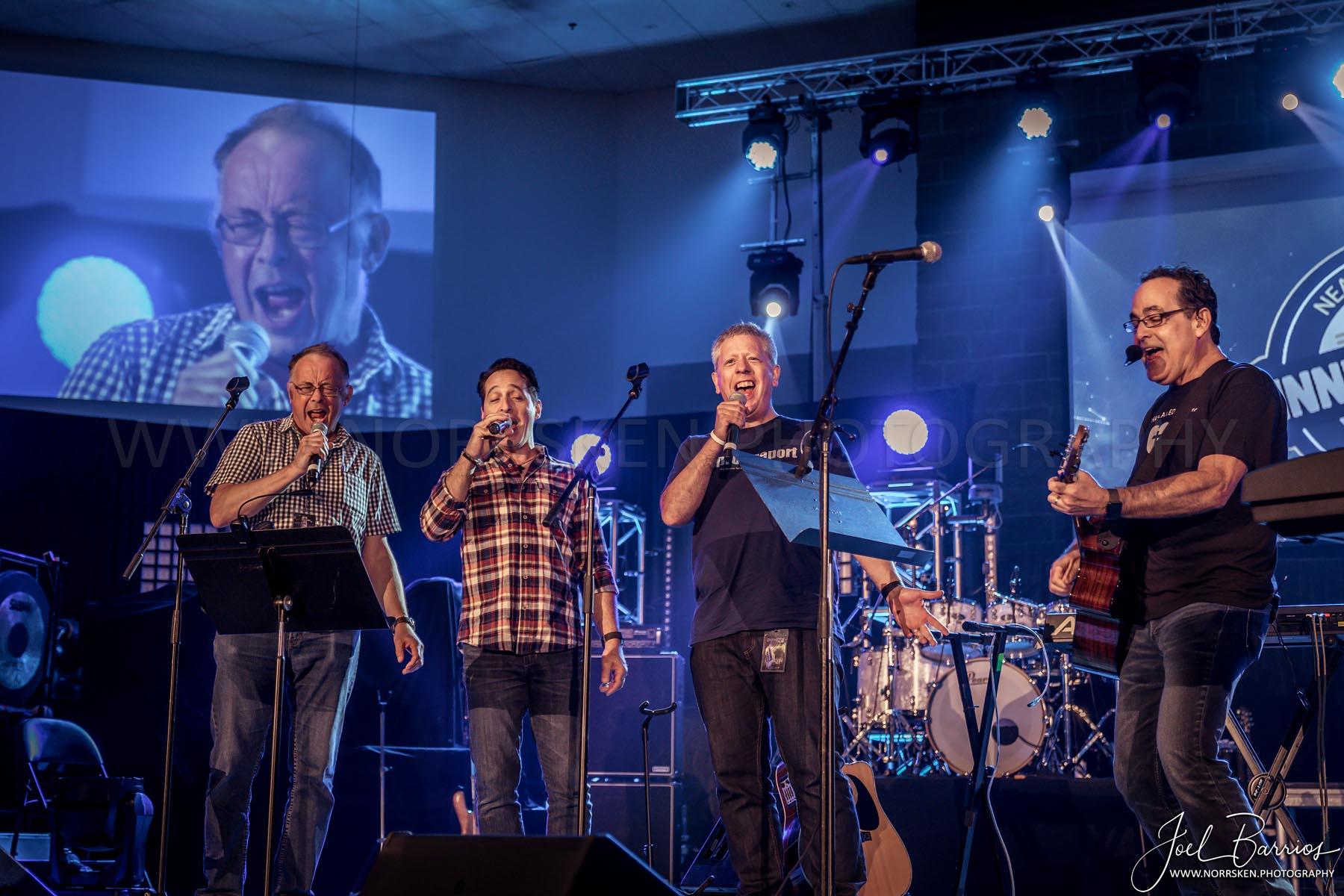 Most of the songs were poignant and heartfelt, until a rendition of “Carpet Crawlers” had their way with us. To close, Nick, Ted and Neal performed an excellent rendition of the Crosby, Still and Nash’s “Suite: Judy Blue Eyes” which surely was another highlight of the weekend!

Saturday night again started by revisiting the Spock’s catalog with their longest song ever, “The Great Nothing”. It was as epic as hoped. Tears were shed. Dreams were fulfilled. And “One Note was Timeless”. Neal and Nick were faithful to their parts, while Neal Morse Band members covering the Spock’s band parts admirably, and Paul Bielatowicz joining Eric Gillette on guitar. At one point the two guitarists even traded off solos. It was a stunning performance, living up to the long wait to finally hear it! Neal introduced the piece by explaining that his spirituality at the time of writing it was simply music itself, and that it had appeared from the Universe as a gift. Even though his beliefs had shifted since that time, it still was an impactful song for him to revisit and for the audience to embrace.

The main course for Saturday night was unlike anything ever seen at Morsefest before. Not only was it was a rock-opera, but it was one where Neal was not playing a major role and instead brought in a slew of amazing singers to have the spotlight. Ted Leonard held the weighty role of Jesus, and delivered it with strength and conviction through many powerful melodies and songs. At times standing up to the Devil, he was at other times quite vulnerable and even choked up with emotion toward the ending number with Mary Magdalene. Nick D’Virgilio was also featured (as Judas) with some of the most beautiful pieces of the night. A cast of veteran singers such as Jake Livgren (Protokaw), Matt Smith (Theocracy), John Schlitt (Petra), Rick Florian (White Heart) and Mark Pogue commanded important roles and moving sections, each one impressing the audience after the other. None of the audience will soon forget a section where the multiple voices of a Gentle Giant-esque canon (a favorite technique of Neal’s) was played out by five different characters/voices, representing Legion. 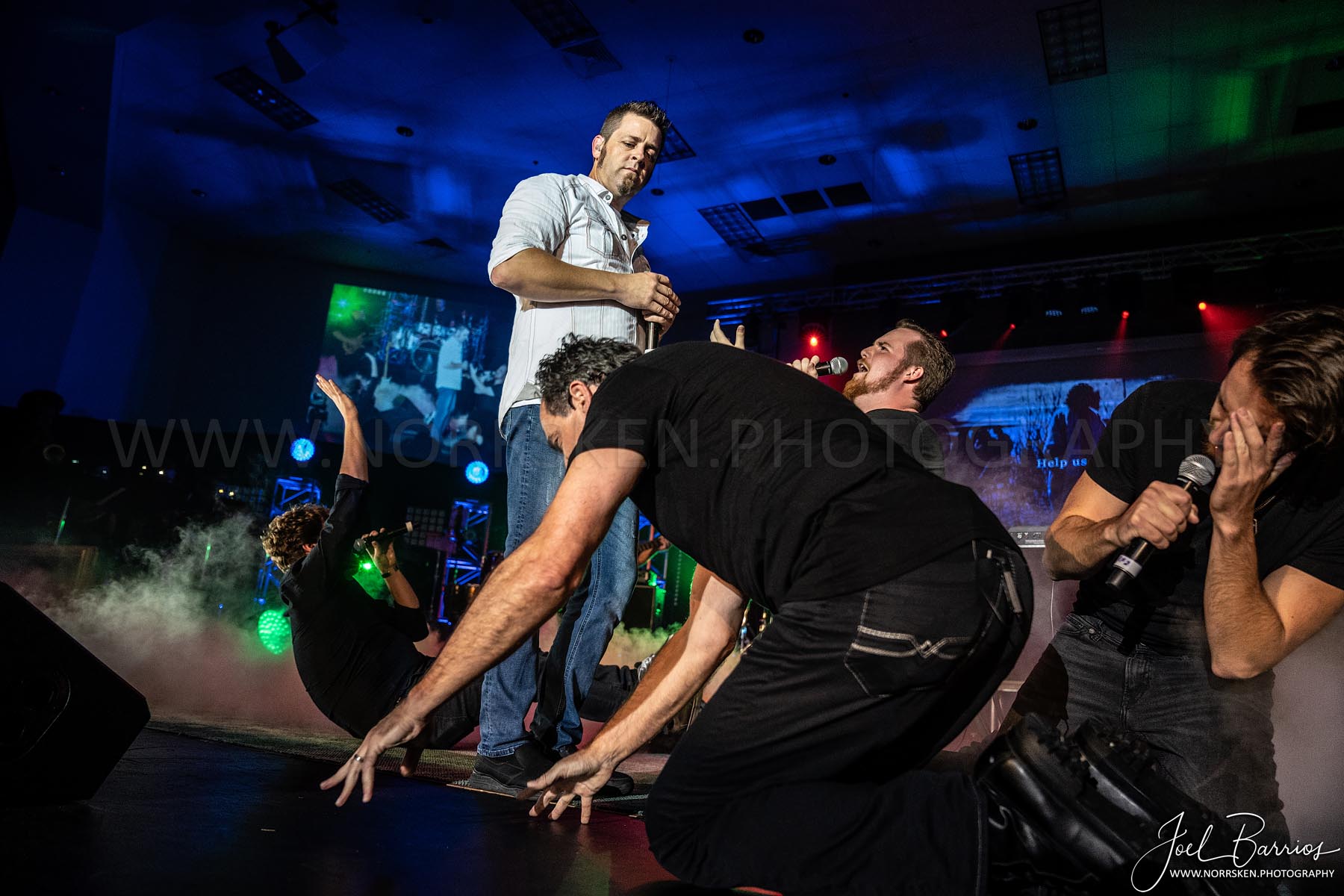 A revelatory performance was offered by Talon David as Mary Magdalene, made even more astounding by the fact that she is only nineteen years old. Although Neal was rarely a featured main character, his glowing and emotional face was always front and center, demonstrating how much this realization of his vision meant to him. He watched the singers/actors as both a musical director and as a witness to the destiny that was unfolding on the stage. Although Neal apologized for not having as much stage production/acting as he envisioned, Christian Rios‘ powerful videos (which included all of the lyrics) added a tremendous amount in telling the story. The fact that such elaborate videos were made for this one performance is astonishing. It’s hard to say who the favorite singer/song was of the evening, because there were so many moving performances. The full orchestration of horns and strings and choir added tremendous depth and color, Eric Gillette’s performance on the drum kit was top notch and triumphant, and there were plenty of rocking performances from Randy, Bill and Paul who all played flawlessly. By the end of the weekend, there was the usual elated glow of exhaustion amongst everyone from an epic job well done. 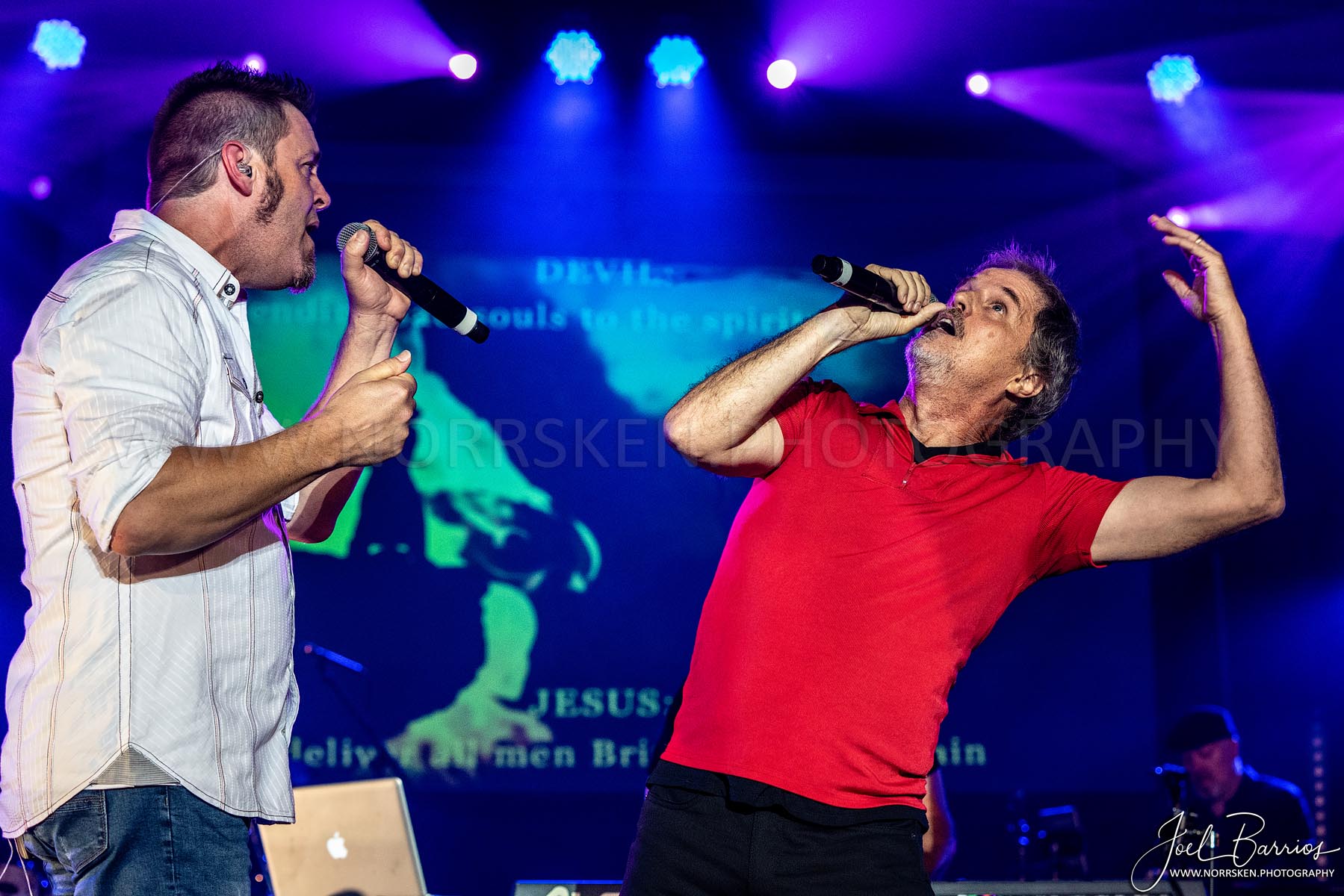 Morsefest draws its strength not only from the epic material, but from the epic community. The fellowship of the audience is palpable, leading to lasting friendships that continue throughout the year. Everyone is touched by the special magic that pervades Morsefest year after year. The festival went to new places this year, proving that Neal’s creativity and diversity are alive and well…who knows where he will take us next!

Voice of the Beard Setlist: