The late 1980’s were thrash heaven. Ground was being broken everywhere; landmark and genre-defining classics were falling out of the sky. METALLICA and SLAYER were gods, DARK ANGEL was brutalizing ears and KREATOR were pumping out twisted riffs that made your neck ache and your brain explode. It was raining thrash classics and MEGADETH’s “So Far, So Good… So What!” was no exception.

When MEGADETH front-man Dave Mustaine fired drummer Gar Samuelson and guitarist Chris Poland for failing to show up for soundchecks and exhibiting other irresponsible and substance-impaired behavior, the band had to find replacements fast. They were scheduled to start working on their third album, as soon as they finished touring and needed to act quickly. Samuelson was easily replaced with capable drum tech Jeff Behler, but locking in someone for the guitar slot was more of a challenge.

The band initially hired ex-Malice guitarist Jay Reynolds to play on the record, which was released on Jan. 19, 1988. But when MEGADETH entered Music Grinder studio to work on the album, they realized Reynolds was out of his league. After Mustaine laid down the rhythms for one of the songs he told Reynolds to play his part and the guitarist asked Mustaine if he could invite his guitar teacher, Jeff Young, to the studio to help him out with the solos. “It was like he’d been trying to hide for weeks the fact that he was in over his head and now he’d come up with a solution. Only it wasn’t a solution at all,” Mustaine wrote in his memoir.

MEGADETH recorded “So Far, So Good… So What!” with producer Paul Lani in mid-1987, and the process was relatively pain-free. But when it was time to mix and master the album Lani thought a change of scenery was a good idea, so he convinced Mustaine to finish the record with him at Bearsville Studio near Woodstock, N.Y. Things didn’t work out the way both supposed they would and Mustaine ended up returning to Los Angeles and hiring German engineer Michael Wagener, who had previously worked with Metallica, among other major bands, to finish the process. Despite Wagener’s credentials, Mustaine was ultimately unhappy with how he mixed the album. “He turned in a pedestrian effort, burying everything under reverb and generally giving the record a muddy feel,” Mustaine wrote.

Despite such turbulent times, “So Far, So Good… So What!” arguably embodies the raw spirit of MEGADETH far better than even the brilliant “Rust In Peace”. It blasts out brutal riffs, fantastic solos and the usual high standard of lyrics Mustaine spits out, while keeping the listener hanging on every note. Kicking off with the instrumental intro ‘Into the Lungs of Hell’, the album immediately grabs you by the face and lets you know that MEGADETH meant business. Setting the tone for an album can be difficult, and doing so with a instrumental is even more so, nonetheless the dramatic opener drives the listener into the mood of the album, while not sounding like an overture or medley. “Set The World Afire” follows suit with astonishing panache, a blistering track about the upcoming destruction of man at the hand of nuclear war, in fact this was Dave‘s first song written after his departure from Metallica. It starts (literally) with an explosion that sets off a chugging guitar riff which morphs into an angry riff. After being kicked out of METALLICA in 1983, Mustaine was sent packing back to L.A. via a four-day bus ride. With plenty of time on his hands, he used some of it to write: “The first song that I wrote on my way back from New York was written on the back of a cupcake wrapper, if you can believe that,” he recalled in a 2009 interview. That song was, at the time, titled “Megadeth.” 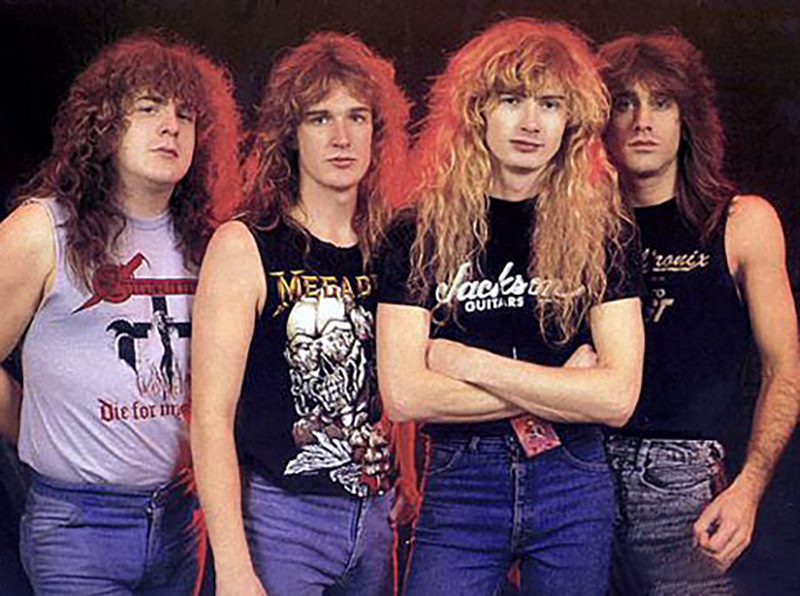 Lyrically, this album is quite impressive. The themes deal with science fiction, drug addiction, social rebellion, remorse/regrets, and of course, politics. The last of these themes mentioned can be seen with their polemic cover of “Anarchy In the UK” by THE SEX PISTOLS. Many Pistols purists thought of it as an unthinkable idea, but it worked just fine. “Mary Jane” is a slow-burner with outstanding guitar riffs including a very dark twin guitar attached towards the end, the initial slow tempo picks up in speed around the middle section and get very heavy during the last minute. The speedy car racing homage “502” is a fast tune containing signature, hyper-speed pentatonic guitar riffs from Mustaine, shredding guitar solos, and thunderous double-bass drumming; also, Jeff Young‘s tapping solo on this one is remarkable.

The most famous song from the album, “In My Darkest Hour”, is a beautiful mid-paced tune and an intricate, piece of heavy metal music. Penned by Mustaine after he knew about the passing of his friend and former band mate Cliff Burton, the music itself adds a great mystique to the song. Referring to a piece in the title, that’s just what the song was: dark. “In my hour of need, well you’re not there. I reach out to touch, but you wouldn’t lend a hand.” A semi-ballad with a beautiful intro for a metal band and a simple yet incredible catchy riff, it remains a staple in MEGADETH‘s live setlists. “Liar” is another punkish song, with a “Last Rites/Loved To Deth” feel to it, the lyrics are simply hilarious but the music simply rocks. Jeff Young‘s guitar solo is outstanding, containing some smoking’ descending and ascending picked scales, blazing two-handed tapping, and whammy bar squeals. The closer—and a personal favorite—“Hook in Mouth” is a fist-pumping thrash bash with a main riff that is a perfect example to describe thrash metal. The guitar solo section is, as you would expect from Megadeth, fabulous; Jeff Young does a “Flight-of-the-Bumblebee” kind of solo before Mustaine comes in with some rocking, wide-stretch finger-tapping. Sadly, it ends when you’re waiting for the next beating on your eardrums.

While “So Far, So Good… So What!” was created during a turbulent time for MEGADETH, and was the only album Behler and Young played on, it sold more rapidly than any of the band’s records to date, shifting 400,000 copies during its first month in stores. The record spawned three singles, “Anarchy in the U.K.,” “Mary Jane” and “Liar” and was certified platinum on May 26, 1998, while also solidifying Mustaine‘s status as one of metal’s most ferocious riff-crafters and sharpest lyricists.

Often overlooked because it is sandwiched between two undisputed classics “Peace Sells… But Who’s Buying?” and “Rust In Peace” and somehow lacking the diversity, energy and inventiveness of the aforementioned two, this album encapsulates everything MEGADETH was, is and should be about. A sarcasm-laced thrash assault with a couple of ballads, and possibly a perfectly contrived album, “So Far, So Good, So What?” is a classic that no MEGADETH fan should be without, and a darn fine introduction for anyone interested in one of the most important thrash-metal bands in metal history. If you are someone who dismissed it long ago, you’re missing out… big time. 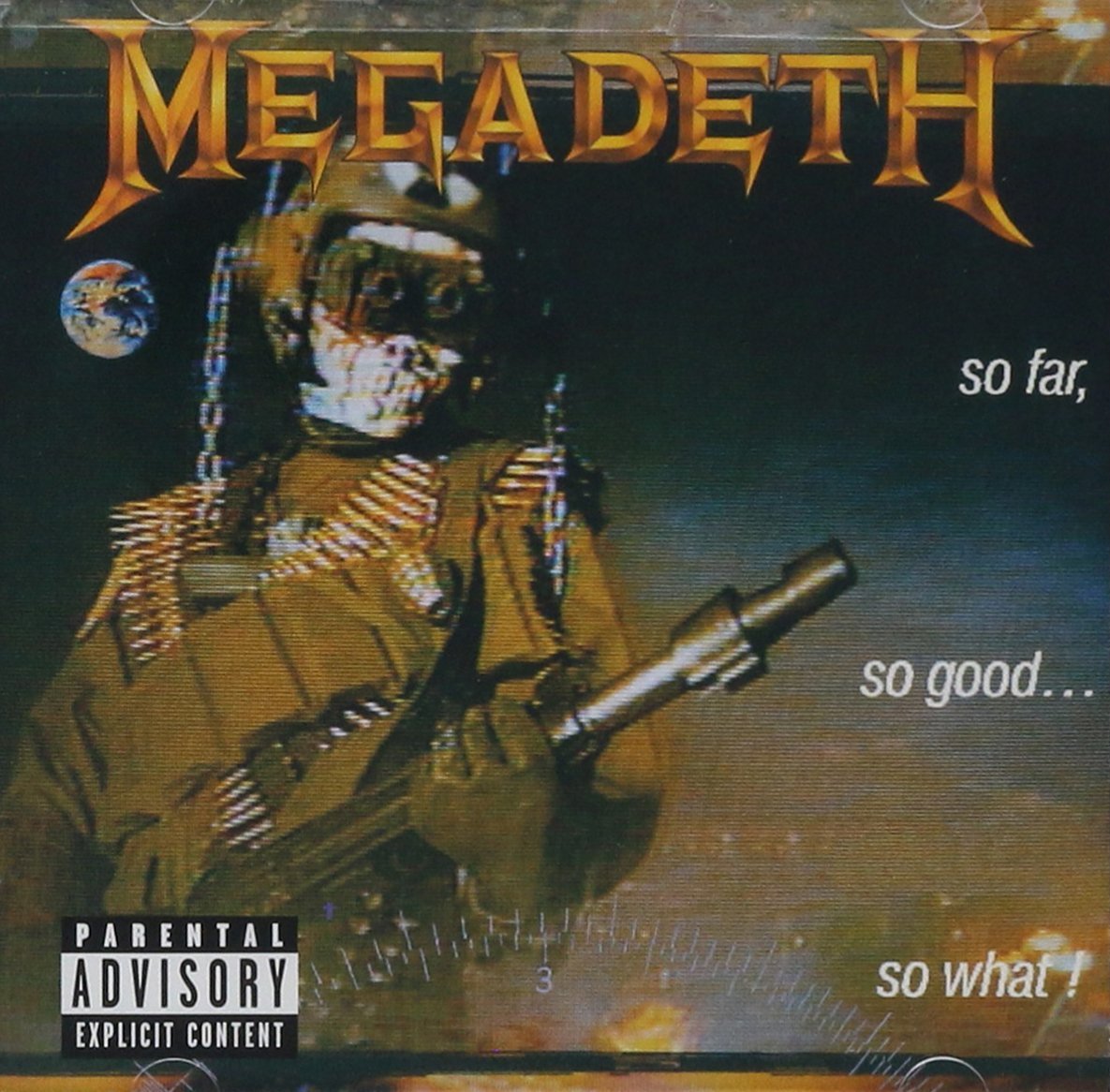 “So Far, So Good, So What?” Album Artwork