For all intents and purposes, thrash metal is celebrating its 33th anniversary in 2016. Yes, as nebulous as rock ‘n’ roll history can be when it comes to dating broad-ranging musical developments, we can confidently point to 1983 as the year when sporadic ‘speed metal’ displays coalesced into the true definition of thrash metal.

Outside of the US, no country contributed more elite bands to thrash metal’s cause than Germany–home to literally hundreds of mosh pit instigators, if you take early speed/power metal contributors like Helloween and Grave Digger into account, along with the acknowledged “big three” of Teutonic thrash: Sodom, Destruction and the inimitable Kreator. Led by vocalist/guitarist Mille Petrozza, the kings of German thrash continually pushed the limits of brutality throughout the 1980s, with album after album boasting some of the era’s most brutal (yet still technical) thrash, setting the stage for death metal and other extreme sounds with devastating albums like Pleasure to Kill and Terrible Certainty. But their most well-rounded effort was arguably 1989’s Extreme Aggression, which coincidentally marked Kreator’s biggest U.S. sales.

This landmark thrash metal album was released 27 years ago, on a day like today, June 19th. While the band had already gained a sizeable following in the US due to their 1987 tour with the crossover thrash band D.R.I., this album introduced many American fans to Kreator, backed by frequent Headbanger’s Ball exposure for teeth-gnashing moshers like “Betrayer”, which was partly shot at the Acropolis in Athens, Greece. This album was their first issued in the US by Epic Records and the original artwork was a monster-like creature painting a picture of a cannibal eating a person’s head. However, it was quickly replaced with a new artwork, depicting an image of the band in front of an orange background. 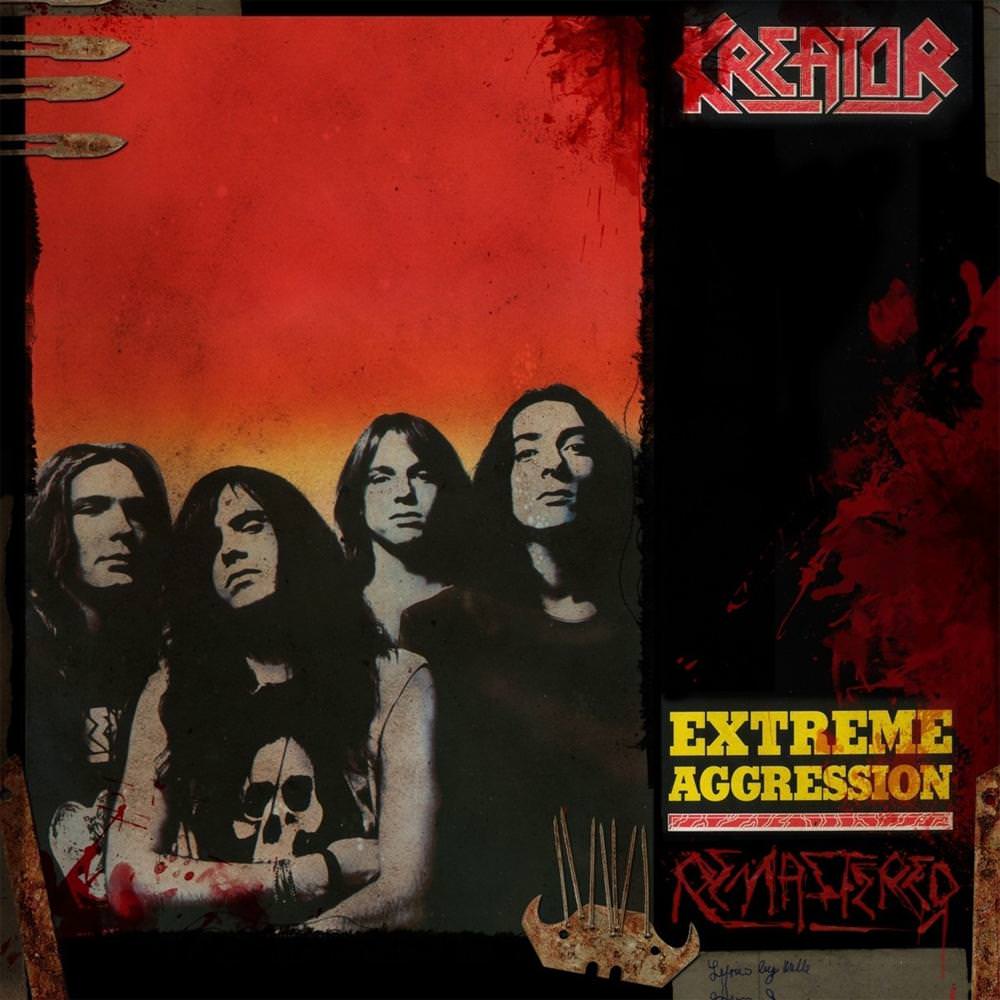 Many old school headbangers like me still consider this album to be the German quarter’s finest hour. The ironic thing about ‘Extreme Aggression’ is that it was the most overtly melodic and polished effort that Kreator had turned out at this point. Hints of it were there on the previous effort, but here, the band has jumped largely into the cleaner, more technically proficient end of the thrash metal pool. Extreme Aggression is the missing link between their earlier raging period and their very clean ‘Coma of Souls’ techno-thrash era.  The album is loaded with all the characteristic attributes of the genre staple, from deadly riffs to solid drumming. You get some of the best riffs ever to be played in thrash metal – displayed by “Betrayer”, “Extreme Aggressions”, “Fatal Energy” and “No Reason to Exist” – as well a brutal dose of properly injected anger and just all out viciousness. The songs shift from brutal and aggressive to catchy and swinging on a dime, and every song packs some absolutely lethal riffs for every situation. Kreator show off their ability to weave through the musical maelstrom they create by making clever use of both speedy, borderline death-thrash riffs and more straightforward, old school thrash riffs in tandem with each other.  This album manages to be energetic and exciting but simultaneously memorable and catchy. All songs have a great sense of structure, the guitars are mostly mid-paced and razor sharp, with interesting development and progression forming the perfect base for the music. Neat breaks and tempo changes are present all through too. Such a reined-in album has the added benefit of every song being a distinct piece from the other.

If you’re new to Kreator, then this album along with Coma of Souls, is a great place to start. This is a great thrash-metal berserker’s rage release from one of the best bands of the original thrash metal movement, and it has stood the test of time admirably. Happy 27th birthday to Extreme Aggressions!

Recorded from January to February, 1989 at the Music Grinder studio in Hollywood, California. Additional recording at E.Q. Sound and Cherokee Studios.