The Christmas spirit has been thick in the air: trees have been cut and dressed in dazzling lights, presents have been wrapped with care, and children have begun to clamor with the excitement of the night that Santa Claus will arrive and bestow them with the gift of wonder. Shopping malls and homes alike are filled with the sounds of Christmas carols, with the chiming of bells and the crooning of familiar post-war melodies in deep, reverberating tones. Yet even in the holiday playlists of the most unassuming suburban housewives there will rise the sound of electric guitars, thundering percussion, and a mounting intensity that seems to only be found otherwise in thrash metal playlists. And as crowds of families fill stadiums across the country throughout December, it seems that the holiday is not quite complete without the yearly pilgrimage of the Trans-Siberian Orchestra across North America. This year, the band was set to play their landmark album “Christmas Eve” in its entirety. 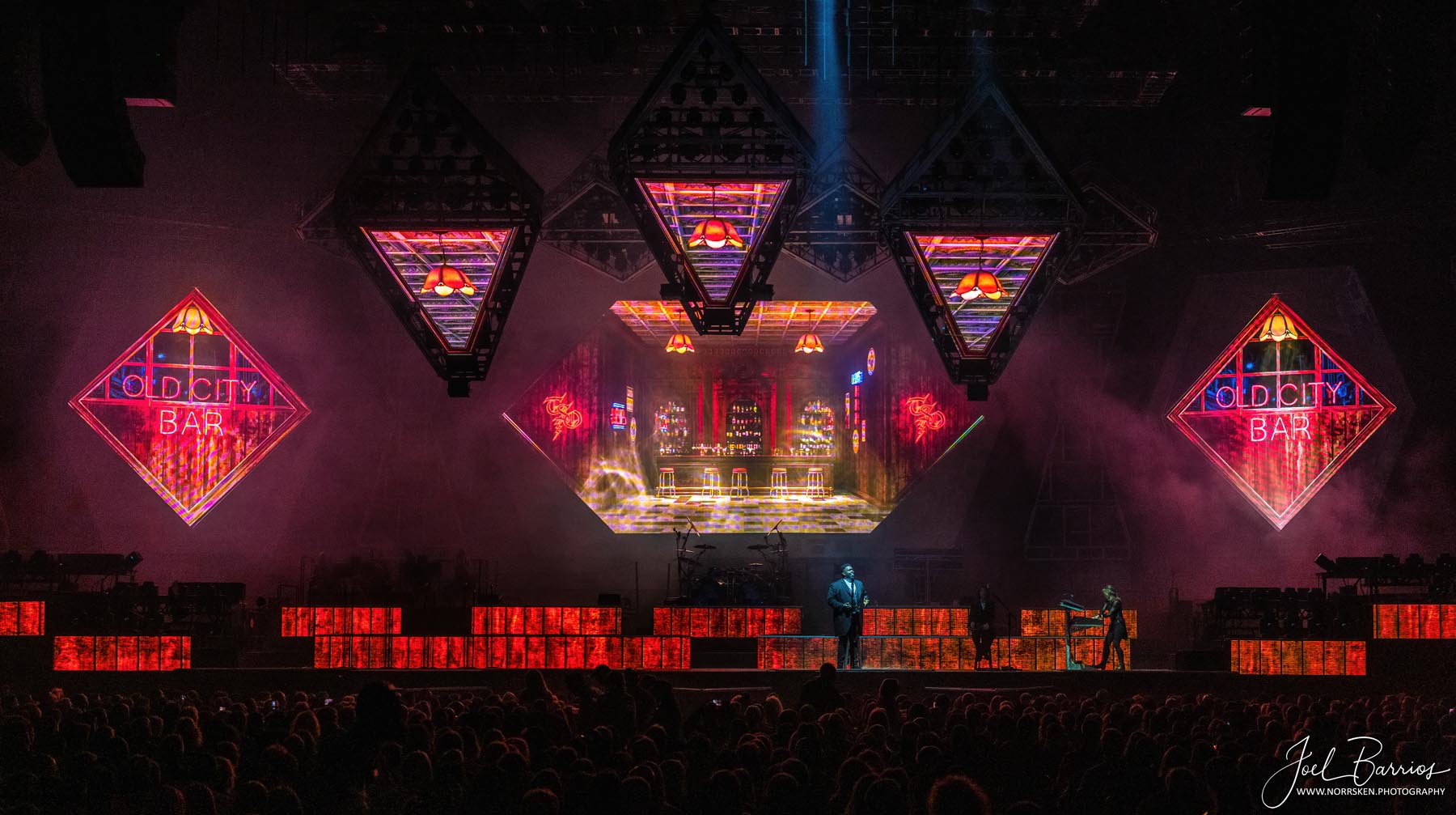 Among the glamorous tales of falling snow on a breathtaking white Christmas that have long dominated the untouchable Christmas fantasy, Trans-Siberian Orchestra celebrates the season with electric guitars, an indomitable orchestra, and a cast of some of the most talented musicians from metal, rock, and beyond. This year was no exception, with the West Company commanding the talents of eight vocalists, many of them returning members to the well-rehearsed ensemble. The West Company is led by no other than the incredibly talented and charismatic Al Pitrelli, a master of both the guitar and stage banter, and of fame from the legendary heavy metal band Savatage and the music director ofTrans-Siberian Orchestra. Taking the stage with a stunning smile and sure footing as he shreds through solo after solo, Pitrelli brings the heavy soul of 80s metal to marry beautifully with the heavily commercialized holiday season of the twenty-first century. While the Trans-Siberian Orchestra may be more of a house name than the band that bore its core musicians, there is no question that the music of the wildly successful franchise owes all of its roots to the indomitable spirit of heavy metal. 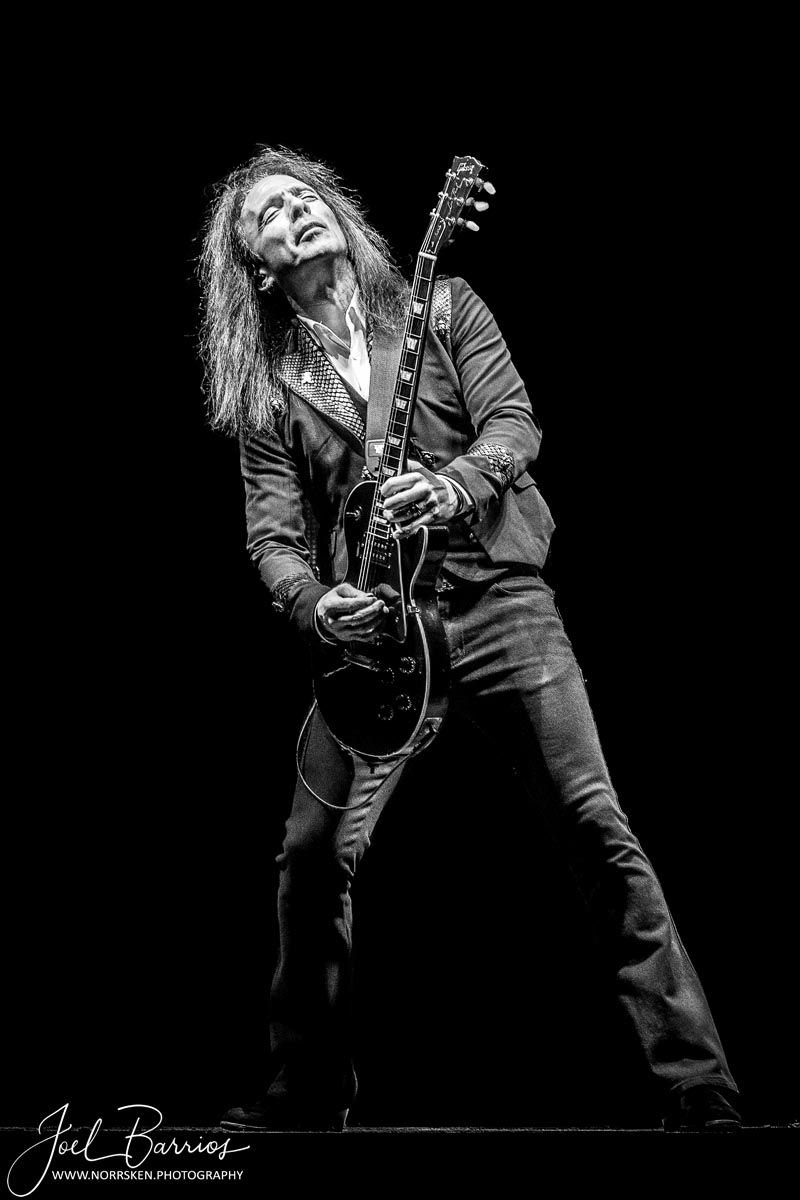 Despite their massive growth in the twenty-one years since their inception, Trans-Siberian Orchestra has not outgrown themselves in ego or pride. Rather, they have approached their success with tactical precision, seamlessly raising the level of production quality at their live performances, upping the octane year after impressive year. This year the stage was filled with three guitarists, a bass player, two keyboard players,drums, bass, eight vocalists, and a local orchestra that changed as the band traveled to different locations. To tie together an image of polished Christmas grace, each musician is dressed to the nines in brilliant black with touches of pure white, coattails flaring behind them with the awe that only such elaborate costumes can inspire, and holding smiles as vibrant as gold.

While this may typically be an impressive number of members to fit on stage, the band has orchestrated choreography that allows members to seamlessly take their place on the stage only when their talents are required, often appearing and disappearing in the low lights between songs. Even more impressive is that these transitions take place among hydraulic lifts, snow machines, pyrotechnics, and a litany of both instruments and microphone stands. Not once after the band took the stage was there a single falter, each step placed with well-trained intent, musicians still able to run at brilliant speeds without once breaking from their musical performance. The stage personalities of each performer were undaunted, leaping from the stage onto the lifted that flanked the center stage, and playing from perches high above the crowd without any semblance of fear. 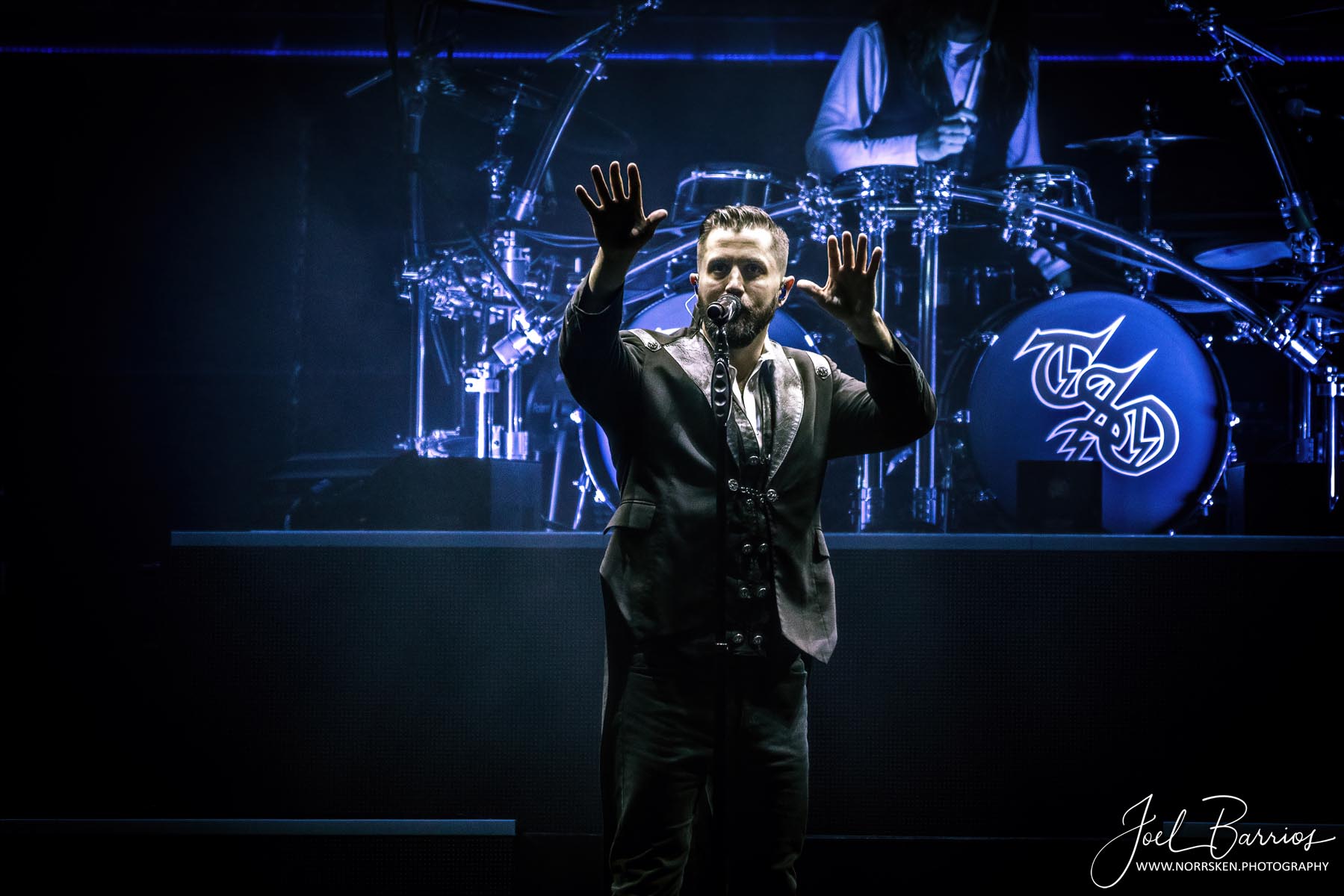 Once the show began, there was no respite from a never-ending onslaught of both wonder and intensity. A light show as bright as the sun poured out concentrated beams of red, green, and white in dazzling patterns to punctuate the music, while guitar solos demanded the presence of towering pillars of flames that could be felt in waves of heat at the far reaches of the arena. During one of their most famous songs, a thrilling live rendition of “First Snow,” brought what seemed to be real snow pouring down on the lucky audience seated front and center. Red sparks rained down from above, sputtering out on stage before dying, yet somehow miraculously missing the crowds of musicians that were dutifully playing throughout the storm of fire. Perhaps most spectacularly of all was an effect that made its entrance only during “The Mountain,” in which coils shot blue electricity streaking through the air, the shrill buzz making perfect time with the song’s unceasing intensity. 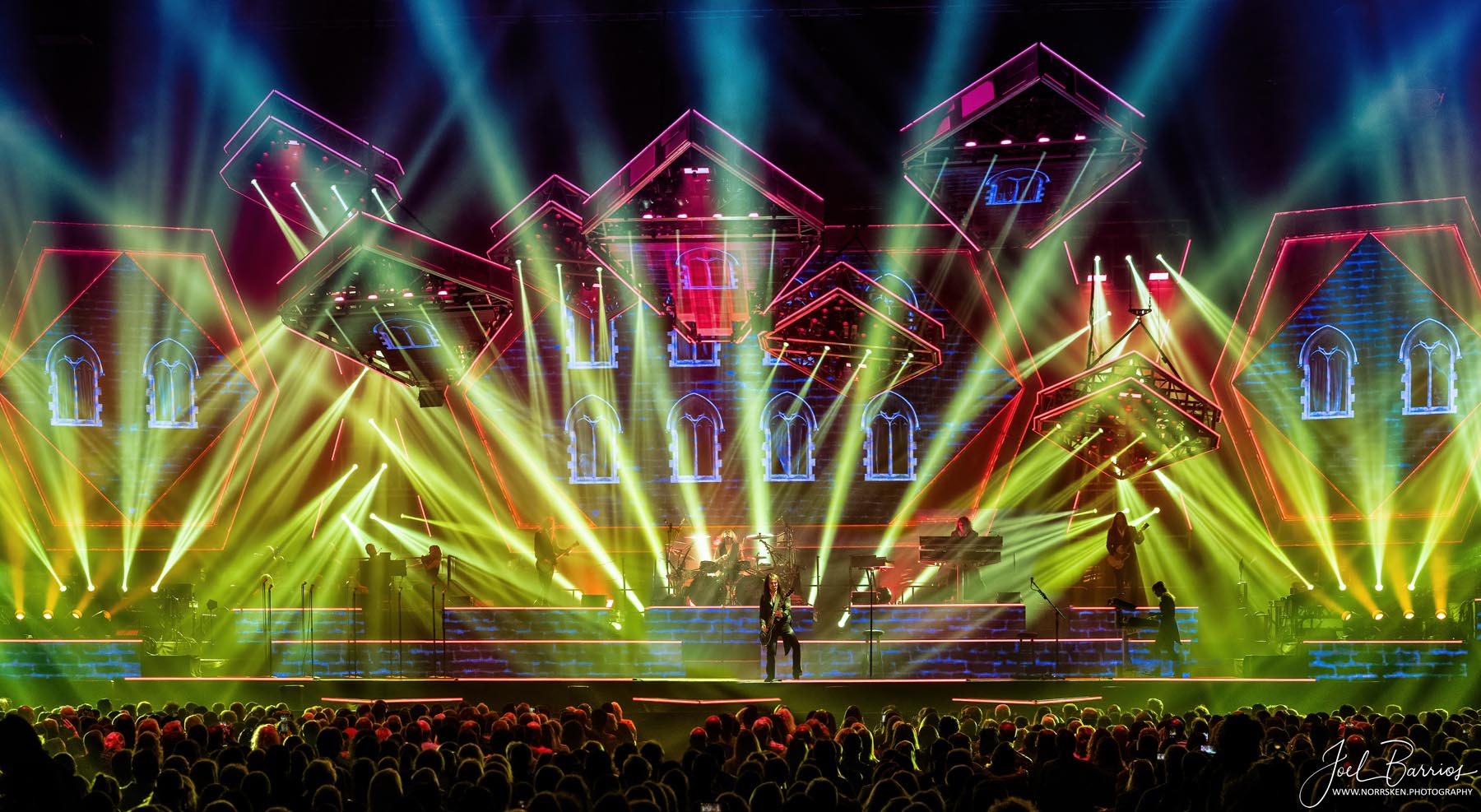 Vocal contributions were not contained to the talented cast of singers alone (the male portion sporting the voices of heavyweights vocalists like the mighty Jeff Scott Soto and the rising star Dino Jelusick among others), but owed much to the soothing narrative of Phillip Brandon. While it was the musical prowess of an unparalleled cast that made the night so spectacular, the Trans-Siberian Orchestra experience is one marked by all of the same qualities as theater. This includes a woven narrative that speaks of the Christmas spirit, of kindness to strangers and to all of our fellow men, and of believing in the magic of hope. In a booming tone that filled the arena, Brandon gave brief and soothing interludes to the heavy bite of a set-list that spanned twenty-four songs. 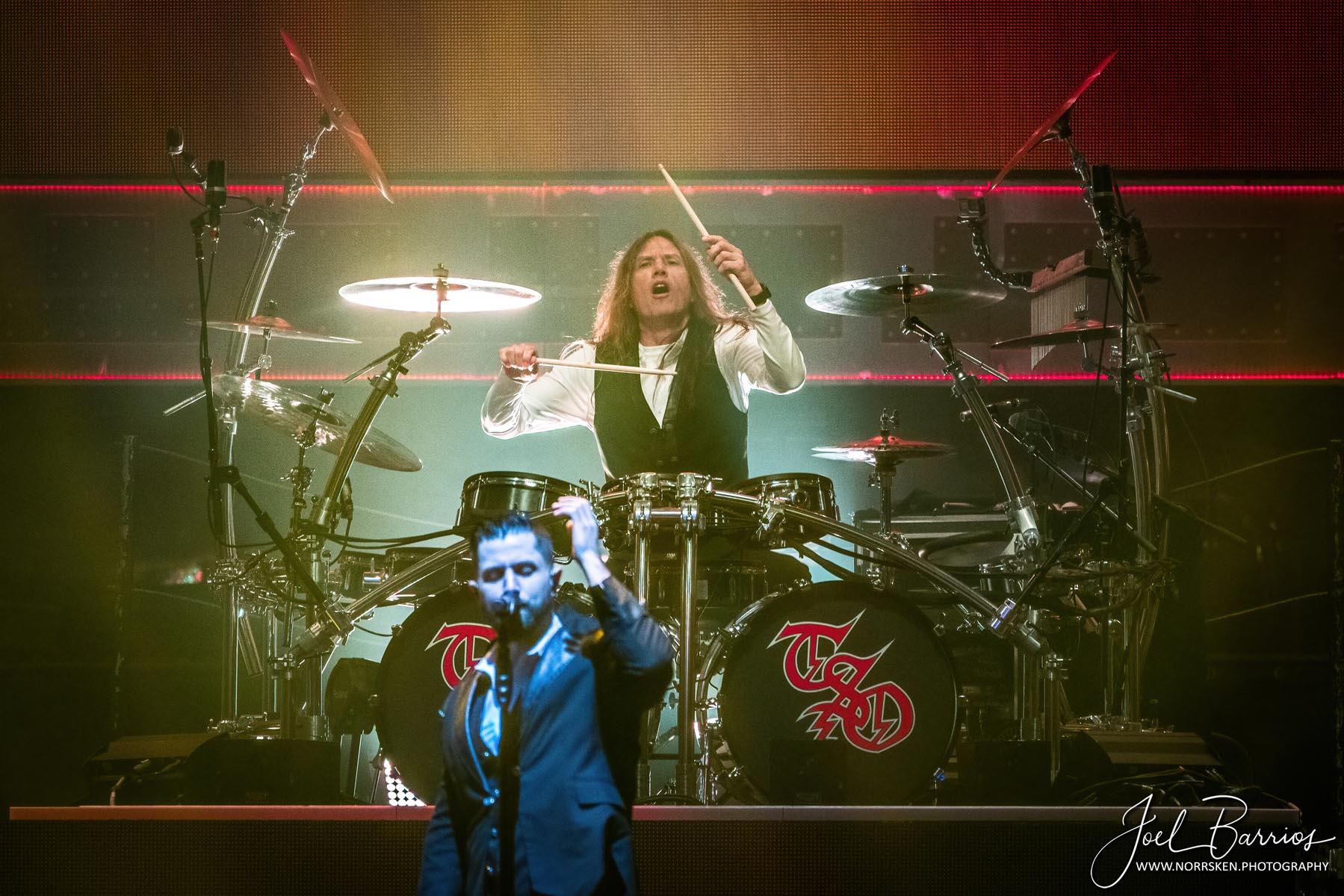 From start to finish, the production of the Trans-Siberian Orchestra experience was both flawless and utterly captivating. From the guitarists running out into the seated audience, to the Blas Elias‘s drum kit being raised on hydraulics over twenty feet in the air, all the way to the magic of snow pouring down among cascades of silky smoke, the myriad elements that came together danced in magical cohesion. The music mounted with an intensity that ebbed and flowed, and owed its grace to the many vocal talents that inhabited the souls of songs that have persisted for decades. It was hard to imagine that such grandeur was born from an ambitious and visionary song, which closed out the night in a stunning reprise. There was a smile on Pitrelli’s face as his fingers hit the unmistakable notes of “Christmas Eve (Sarajevo 12/24),” and it was a smile reflected in the audience as the lights finally dimmed after more than two and a half hours of music. 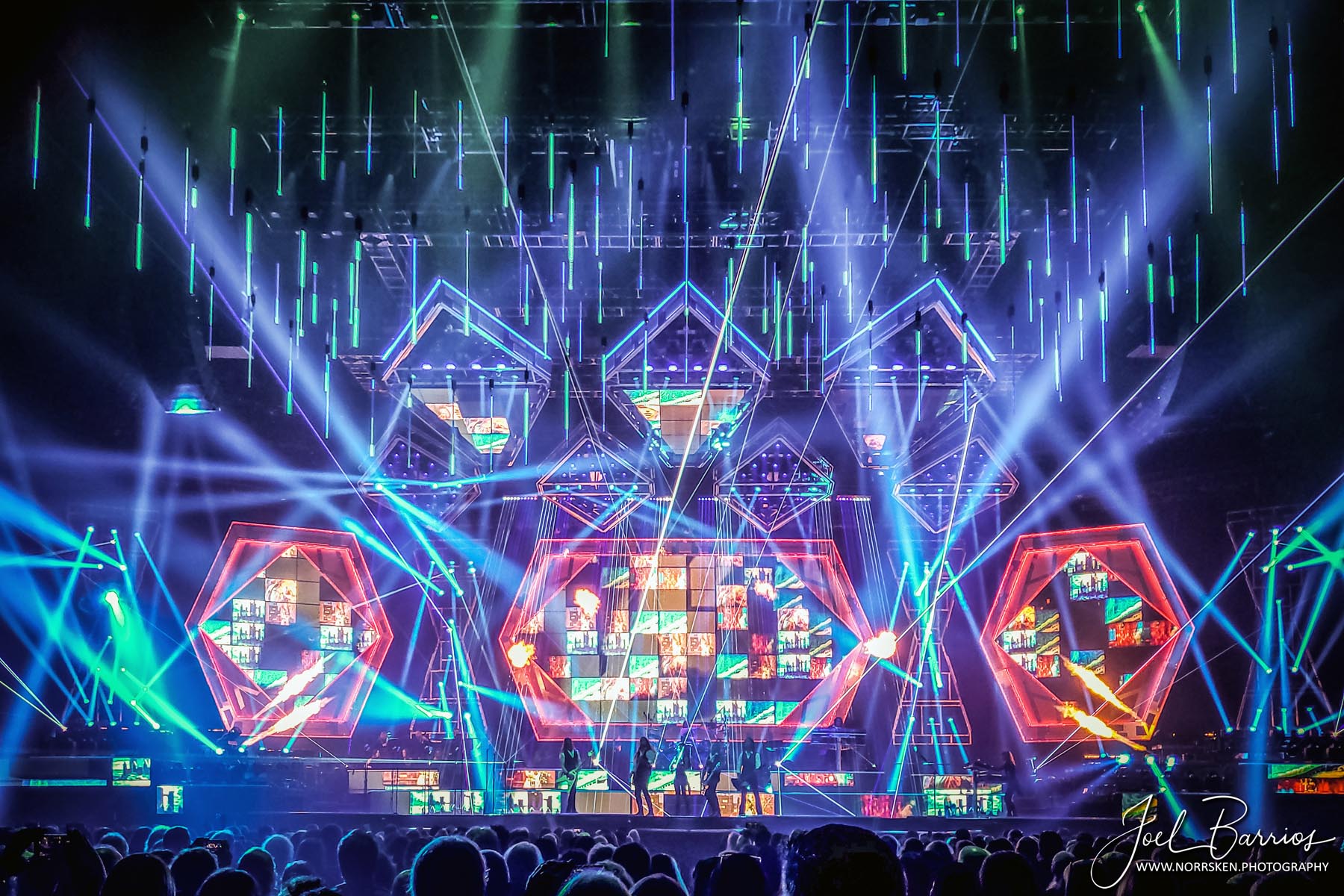 In a beautiful start to the often chaotic holiday season, the Trans-Siberian Orchestra continues to bring Christmas passion to the masses in an absolutely unforgettable performance, and one that shows the beauty of not just the holidays, but the undying flame of heavy metal that lives on in hearts across the world.