Around a month ago my husband asked if I wanted to go to Tesla concert for a second time, and my immediate answer was a resounding YES!… Our first Tesla show happened around 2 years ago, at the Orlando’s House of Blues, and it was a complete blast. We had a terrific time at the VIP session, and an the actual show was one of the most enjoyable I’ve been to. Obviously we got thirsty for more, so I was game immediately.

Once again we took the plunge and purchased the Meet and Greet package and arrived early to the venue, as the VIP experience was due to start at 4:30 in the afternoon. After receiving our goodie bags, containing a very nice gun-metal flask with two stainless steel shot glass set plus a band signed picture, we were taken inside the beautiful theater, where the band was going over the sound-check. We were received by the band with smiles and jokes which were answered with cheerful applauds and they proceed to answer several questions from all the fans in attendance in a very relaxed atmosphere, to later perform the first song of their upcoming set for us. Once the sound check was over we were taken out to a side area and lined up to get our picture with the band members. During the photo experience they behaved once again in a very humble and natural way, having some personal time with their fans before the picture, asking personal questions and greeting everyone individually. The whole experience was once again a remarkable moment, worth the money spent and time invested in it.

With thirty plus year of music and hundreds of sold out shows under their belt, Sacramento rockers Tesla are a living statement of consistency in spades. They invaded the stage around 8:30 PM with singer Jeff Keith entering the last, and once he did as the band broke into “MP3” (a song off their latest album “Simplicity” which went to number 24 on the Top 200 Billboard Chart in its first week). From that moment onwards, the crowd’s energy rose twofold and didn’t come down for the entire duration of their show. Despite guitarist Dave Rude is the only one of them not in their 50s, the band displayed an unbelievable on-stage energy, showing off enough strength and closeness throughout the night to make any younger band pale. Singer Jeff Keith has maintained the gravelly edge to his voice, and held every note while rocking out, dancing all around, and interplaying with a standing crowd who was dancing and singing along; just to see him on stage was a show on its own. 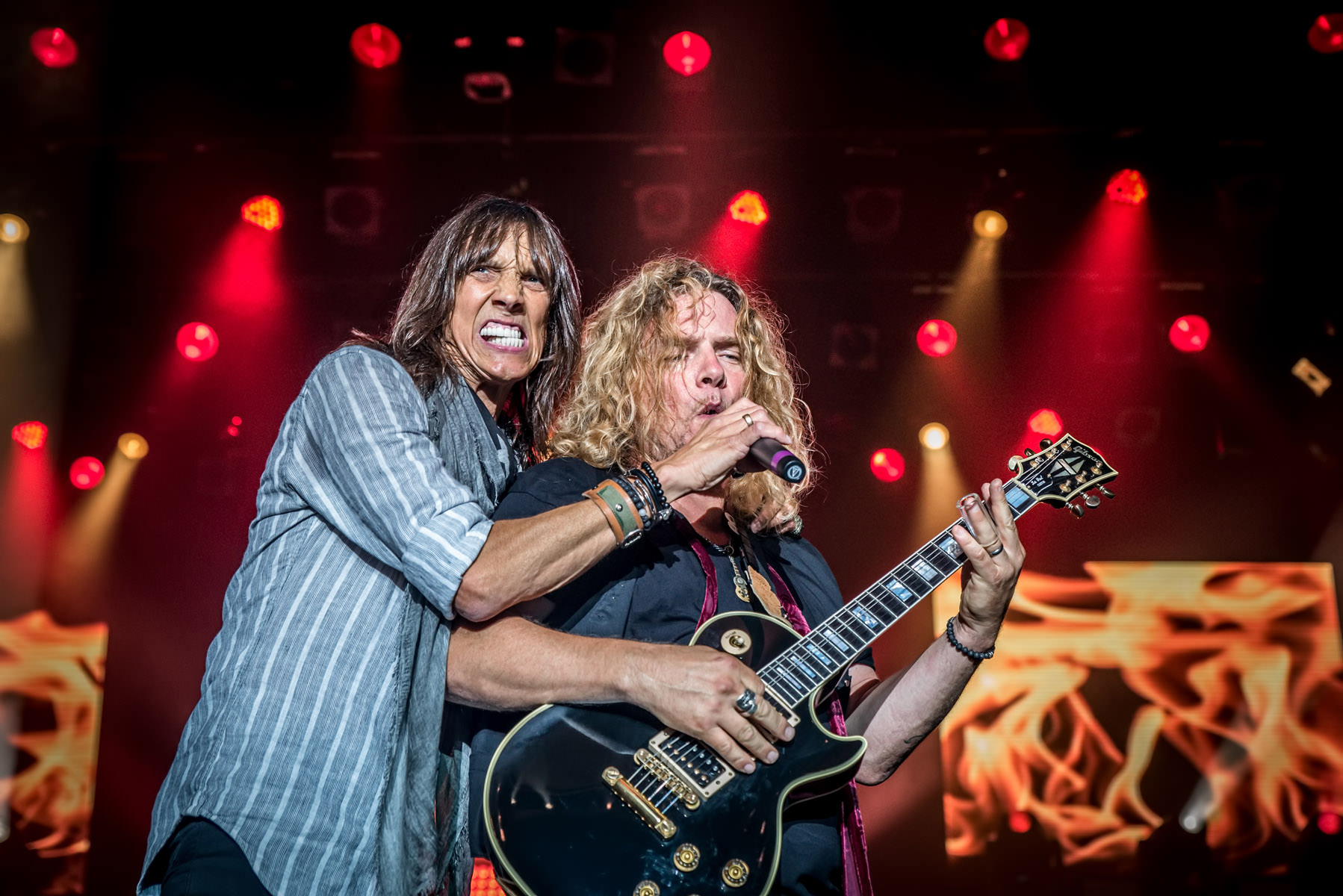 Guitarists Frank Hannon and Dave Rude showcased all their abundant talent; adding plenty of rock flair to a set-list mainly comprised by a compilation of their well-known hits. “The Way It Is”, “Hang Tough”, and “Heaven’s Trail (No Way Out)” dropped one after another, taking the audience’s reaction to even higher levels. The band was as tight as ever, with Troy’s drumming and Brian Wheat’s on-point bass line providing a pounding-machine like backbone.

An unexpected mid-set acoustic section, much in the vein of their excellent “Five Man Acoustical Jam” album took place afterwards. Troy came forward to play a smaller drum-kit, and they all seated on high bar-stools and played “Comin’ Atcha Live / Truckin’, “Signs”, and “Paradise”, the latter with Brian jumping on the keyboard. Even though the vibe was mellower and we were in a theater with assigned seats, not a single person cared to seat. The stage setup was also imposing, a simple but effective combination of with several video screens and risers, adding an additional degree of awesomeness.

The night continued with many more classic Tesla songs. In a blink of an eye we were back in full hard rock n’ roll mode, while the rich harmonies of “What You Give” filled the air with, later followed by “Edison’s Medicine”, and the ultra-popular “Love Song” and if it wasn’t enough “Little Suzi” to close off their set. I abandoned the camera over my seat and started singing like everyone else, I knew all the verses of those songs! As expected, we felt the show too short so the whole venue started clamoring Tesla! Tesla! … we were all hungry for more. The enchanting Jeff came back and asked us if we wanted one more song (question which got an unanimous response) and they re-appeared to give us an electric encore with “Modern Day Cowboy”.

While many of its contemporaries struggle on the oldies circuit, Tesla have managed to remain relevant and in high demand, perfecting their performances to a degree that not only young fans but old loyal ones enjoy from beginning to end. The dynamic, the energy and the bond between them can be felt by everyone in the room, some sort of intangible element that forms over time and really brings this and any classic rock show to the top of my list of favorite shows to attend. The rocking songs still hit hard, the ballads still soared, and the crowd filling the place to the rafters sang along nonstop as they were treated to a great night out. Exuding a fun and confident vitality, and giving their fan an unforgettable dose of outstanding and energetic musicianship with every live show, Tesla are a true testimony of a band which have aged well like a fine wine and have only gotten better with time.