Since the pandemic started, Steel Panther has done an amazing job at connecting with their fanbase. Not only they put together their daily public announcement reminding us exactly “what freakin’ day this is”, but they have been doing well organized live stream events from time to time. On June 07th we saw their “Concert to Save the World”, and August 16th brought us the “Rockdown in the Lockdown”. In celebration of Halloween, last Saturday, October 31st, we were rewarded with the “Halloweenie Ride”. As was the case with the other livestreams, this event was sponsored by Monster Energy, and they brought their typical “let’s all party like tomorrow is the end of the world” attitude to the stage.

One would be hard pressed to find a more appropriate setting for a Steel Panther show than the Viper Room. Located in the heart of the Sunset Strip in L.A., this staple of the hard rock and glam genres has hosted many memorable evenings and has its share of controversy and danger as well. In other words, the unashamedly non-PC lyrics and the ridiculous sexiness (or sexy ridiculousness) of the band were right where they should be for Halloween.

The night started with the one-two punch “It Won’t Suck Itself” and “Gold Digging Whore”, both staples of their standard set. Michael Starr (vocals), Satchel (guitar), Lexxi Foxxx (bass) and Stix Zadinia (drums) probably used their monthly allowance for mascara, lipstick, botox and spandex for that ONE show, and wasted no time in greeting “California and surrounding countries”.

The smart use of humor to their own advantage has always been Steel Panther’s forte, and tonight it was no different. The obviously fake, piped-in applause was smartly used, and the stage banter was on point. “You know why ghosts can’t have babies?”, Lexxi asked. “Because they have hollow weenies”. In between certain songs, the live-stream included horror stories told by the band and a few special guests. And it’s not a Steel Panther event unless there are boobs on display, so they did take care of that important aspect of their show while telling those horrific tales. And as if to prove that this was a real live event, the band read messages from the chat and responded to a few fan requests while on stage. 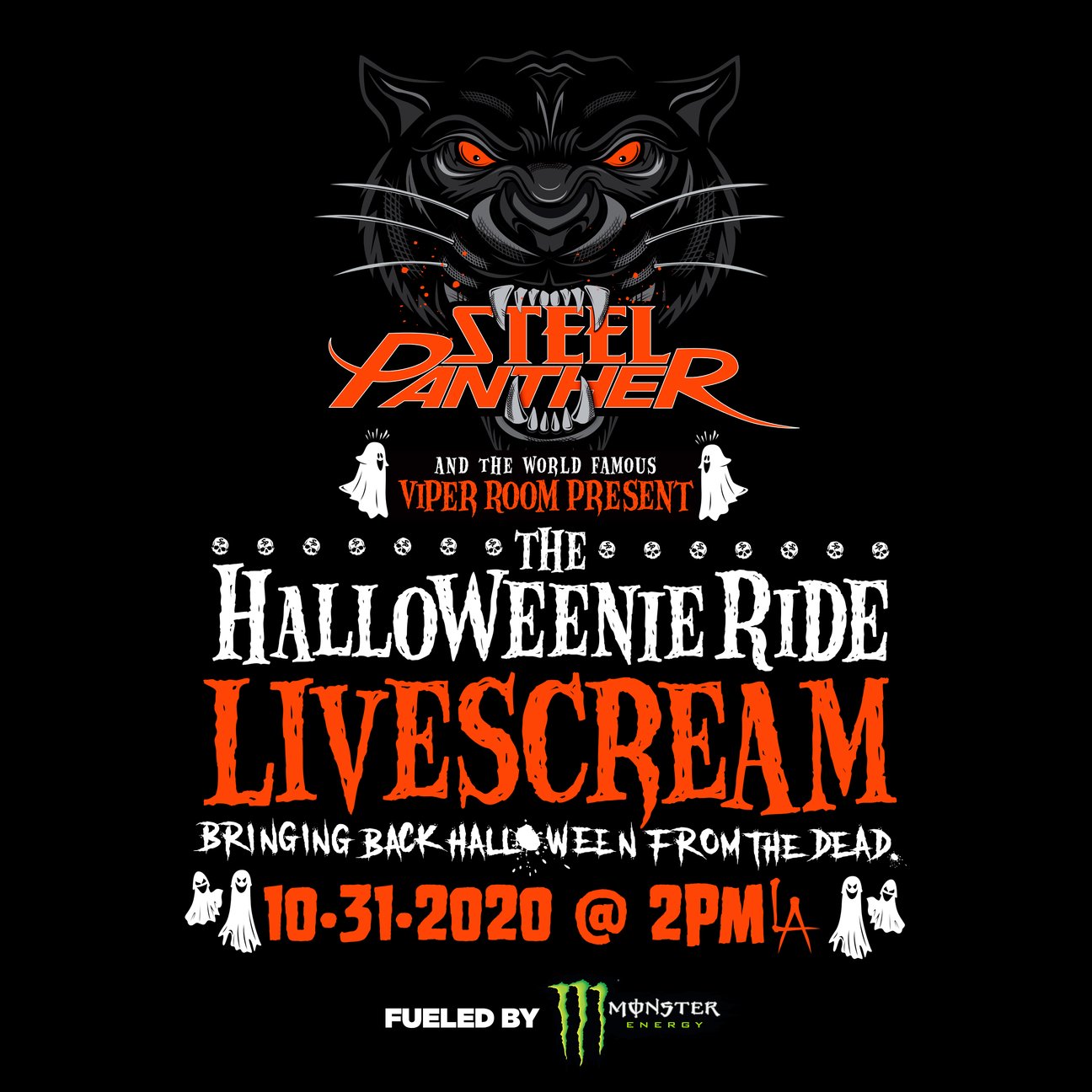 Other highlights of their own repertoire included “Glory Hole”, “Community Property” and “Weenie Ride”, where Stix played the piano. Rob “Blasko” Nicholson, who is currently Ozzy’s bass player, joined them on stage for a great version of Ozzy’s “Over the Mountain”, with Michael doing his hilarious Ozzy impersonation. Jesse Hughes from The Eagles of Death Metal also guested, playing Judas Priest’s “You’ve Got Another Thing Coming” and Billy Idol’s “Rebel Yell”. The great thing about Steel Panther doing covers is that they fall somewhere between trying to duplicate the originals and completely reinventing the song. Instead, they make them their own, and classic numbers like that end up sounding like they wrote it – except for the serious lyrics.

Speaking of covers, they also payed homage to Eddie Van Halen, by putting their own spin on “Jump” and “Panama”. Michael and Satchel absolutely shined on these versions, with Starr telling the story of how his mom sucked David Lee Roth’s d**k at one of Van Halen’s shows, and that’s how he eventually got to meet his idol.

Bringing it all home, they closed the proceedings with three other staples that never seem to get old: “Death to All But Metal”, “Community Property” and their re-imagination of Bon Jovi’s “Livin’ On A Prayer”, the bluntly titled “Fuck all Night (Party all Day)”. Say what you will about Steel Panther, but they absolutely always deliver. In such challenging times, that night’s set was a trip down memory lane, and for a brief moment, it felt like 1984 never ended. Check out a video clip of the performance below and remember the live-stream will be available through November 14th at this location.