If your musical taste has ever flirted with metal, chances are you have listened to at least one Overkill record. New Jersey’s infamous bad boys have been at the helm of the thrash-metal scene since the early 80s without ever receiving the credit due for keeping the genre as big as it is, making quite the career for themselves (at varying points being classified as speed, thrash and straight-up metal) and always delivering their trademark gritty, concrete-chewing badassery. To my ears they belong more to the Big Four of thrash than Anthrax does, and if someone comes up with a prize for consistency and sticking-to-their-guns for over 30 years, they will be no-brainer winners. Their eighteenth album (yup, you read that number correctly) “The Grinding Wheel” was released last February 10, 2017 on Nuclear Blast Records and in June they announced a second leg of tour dates thought North America dubbed as The Metal Alliance Tour and including New Orleans sludgers Crowbar, Havok, Black Fast, and Invidia as supporting acts.

The Culture Room at Fort Lauderdale was the closest tour stop to where we live. I had seen Overkill live at least three times in the last 4 years, and I knew exactly what to expect from their live show, actually my first time seeing them was exactly at the same venue. Not particularly interested in any of the opening bands, my wife and myself managed to arrive at the venue approximately 20 minutes before the beginning of their set. I was gladly surprised to find a fantastic standing spot in the second level, and we stood there while the stage crew finalized the change-over after the Crowbar set was done. The drum-kit positioned over a riser, flanked by two metal columns supporting some light strobes and covered with a “The Grinding Wheel” themed cloth was the center of attention, and its appearance rather majestic.

Around 9:30 PM the stage came back to life amidst a multitude of green-toned lights, and the silhouettes of Bobby “Blitz” and company delineated themselves in the shadows. And from that moment on the night shifted and became an alternate reality dominated by the plummeting sound and extra energetic show of a true live powerhouse. Describing what an Overkill show feels like is tough, mainly because the music engulfs you and it doesn’t let go. Their trademark swirling thrash riffing and pounding rhythms is usually accompanied by long-standing groove-infused sections, keeping their most straightforward passages as biting and intense as ever, and displaying their penchant for dynamic tempo shifts that makes the music far more interesting than most would suspect. They sound dynamic, pissed and raging at the same time, yet the music contains the necessary level of melody and hooks to also be enjoyable. 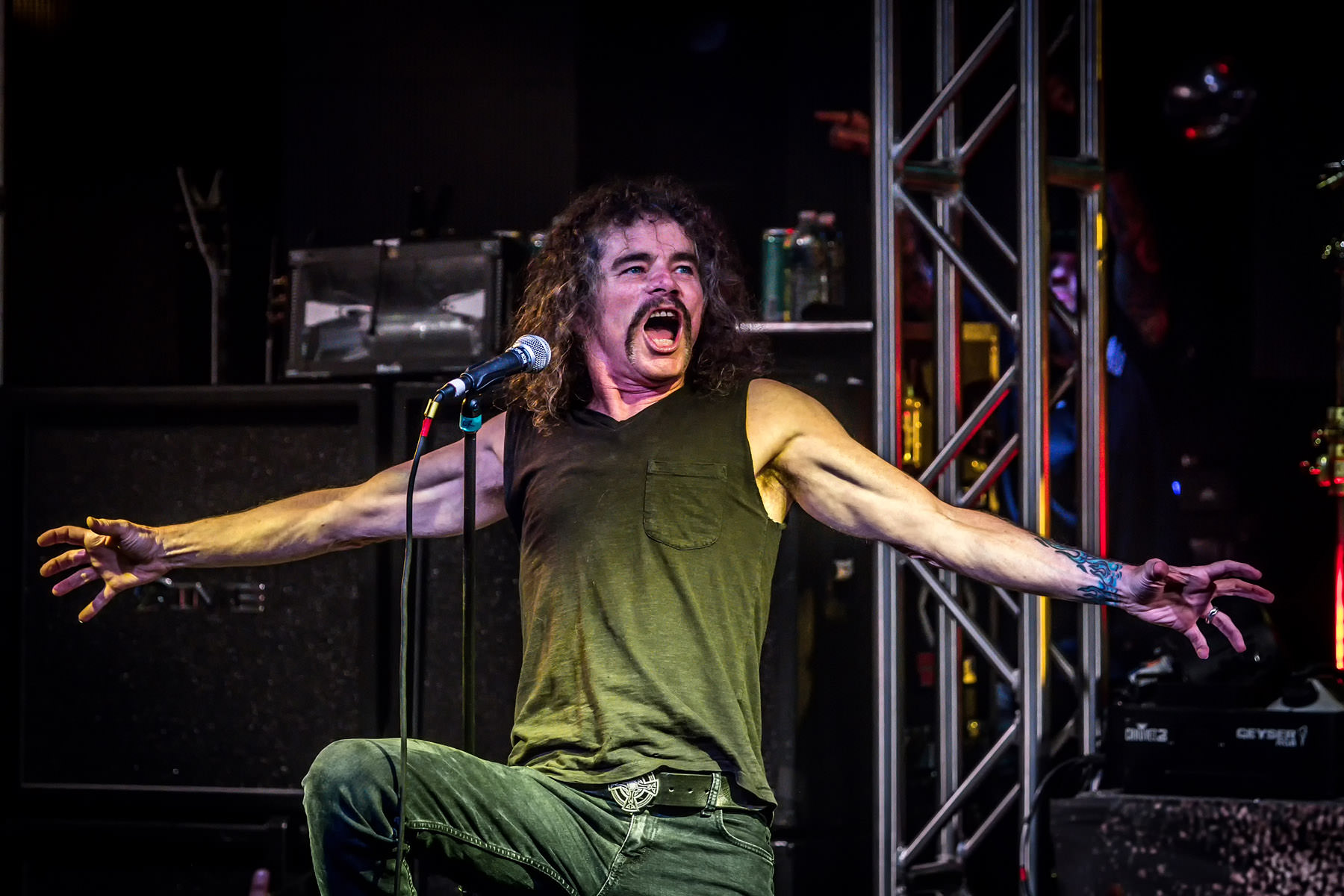 Bobby “Blitz” of Overkill playing at the Culture Room

And then, there’s Bobby. The older he gets the raspier his singing becomes, yet maintaining the full use of falsetto in a way that triggers a feeling of anger and determination. Add that to his fun, cursing and sincere stage persona and you get a hard-to-beat front-man. According to Bobby there’s only one rule at an Overkill show “I am in charge tonight, I’m el jefe!” he yelled over the frantic audience before jumping into the mosh-favorite “Rotten to the Core” which turned the floor into a whirlwind of controlled violence, with bodies pounding and crushing in the darkness. But if Bobby always sounded great, whether the band were belting out faster paced pavement justice or one of their fattened, predictable Sabbath grooves, his bandmates were no slouch either. D.D. Verni on bass (the only other remaining original member) and Derek “The Skull” Tailer on guitars never once stopped moving, making over the top facial expressions, yelling directly at crowd members and flipping people between riffs off the entire night, meanwhile Dave Links‘ face showed an expression like he was in absolute zen, enjoying his own playing to a different degree even when engaging less with the front row fans. And to round them off, “the newest member of the Overkill family” – as described by Bobby – is the absolutely phenomenal Jason Bittner, whose maniacal playing behind the drums adrenalized the band’s sound to a higher degree, creating the perfect bedrock along with D.D. Verni trademark, clean and huge bass lines.

Surprisingly the setlist did not focus on their newest record, but included fan-favorite tunes from their back catalogue like “Hello from the Gutter” and “In Union We Stand” hand in hand with “Wrecking Crew”, “Ironbound” and the always outstanding groovish, and heavy speeder “Thanx for Nothin'” from their favorite record of mine “Horrorscope”. They encored precisely with the dark and menacing “Horrorscope”, a track epitomizing one heck of a slow chunking guitar riff, moment which offered the funny note of the night as a feverish fan jumped on stage and tried to embrace Bobby, while one, two and finally five security guys struggled to take him away almost knocking Dave Links in the process. “Elimination” upped the frenzy ante to unsuspected levels with Bobby snarling like a living embodiment of a possessed rattlesnake, and the band diving headfirst into an speed-metal race, and their setlist-staple closer “Fuck You” brought the venue to an apotheosis ending, bathed in a thundering applause lasting for several minutes.

A well-oiled machine of memorable, singular and sardonic heavy metal, Overkill owned the night with their zero holding back attitude paired with kicking ass guitar riffs, blasting drum kicks and unforgettable bass hooks. With the resurgence of metal in the music world I can’t think of many bands who would give your metal-head soul a better pleasure. Do yourself a favor and don’t miss them the next time they come near you.

Mean, Green, Killing Machine / Rotten to the Core / Electric Rattlesnake / Hello From the Gutter / In Union We Stand / Goddamn Trouble / Wrecking Crew / I Hate / Shine On / Ironbound / Thanx for Nothin’ /