On the eve of a cancellation crisis that would devastate the live music scene for the foreseeable future, a crowd was gathering in the heart of a Floridian music venue, only aware that a storm of high-octane thrills waited just moments away. Overkill was back on tour, riding the indomitable wave of victory for their latest success “The Wings of War.” I have seen Overkill six times in the last four years, and each time the longstanding thrash machine delivers with speed, grit, and some of the most powerful musicianship in their genre. “The Wings of War” marked their nineteenth studio album in more than forty years of making music, a feat almost unheard of in a scene with such a long history.

Had I not been aware of their age and expertise, I would have guessed that the eager thrashers were feeding on the energy of pure youth and the excitement of artistic novelty. As I have come to expect from their performances, when they finally take to the stage, experience and enthusiasm mingle for a performance that is both theatrical and genuine, engaging the crowd with riveting command. It’s easy to imagine why their name has been synonymous with thrash metal for so many years. 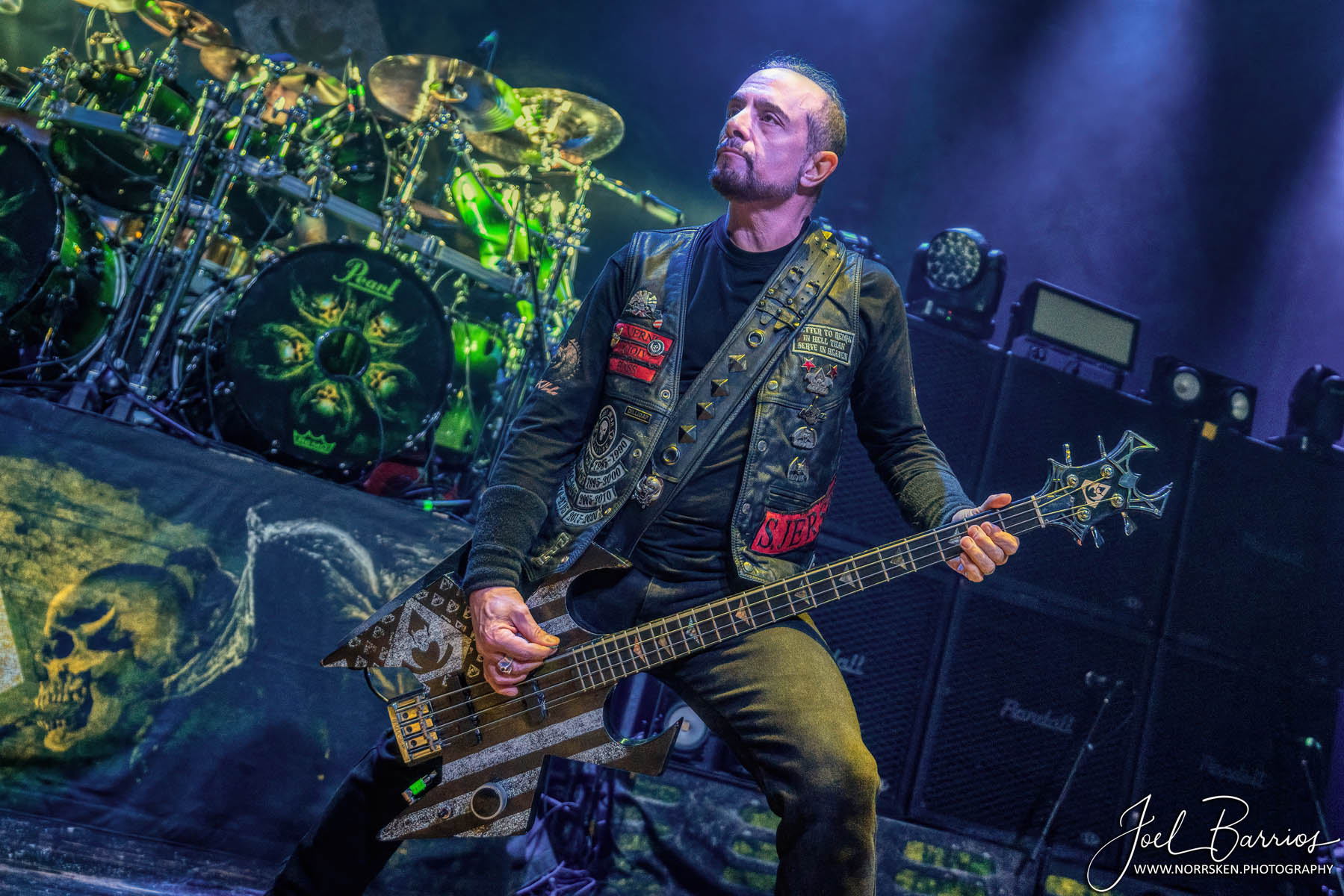 D.D. Verni, a master of the four strings

An unforgettable reminder of their latest musical accomplishment, the rich album art from “The Wings of War” hung as a larger-than-life backdrop behind the stage. Bathed in continuously rotating multicolored lights, the album’s opening track “Last Man Standing” was the perfect choice to start the night, slowly turning up the heat with its industrial sounding intro, until vocalist Bobby “Blitz” Ellsworth rushed out in perfect time to unleash his signature high-pitched shriek. As proof of his vocal prowess tore through the venue, the song opened up into a full-throttle thrash attack, kicking the set into high gear from the very start. The persona Blitz adopts on stage is absolutely magnetic, a raspy voice that has maintained its power even after years of relentless touring and hitting falsettos that could split concrete with their razor-sharp edge. 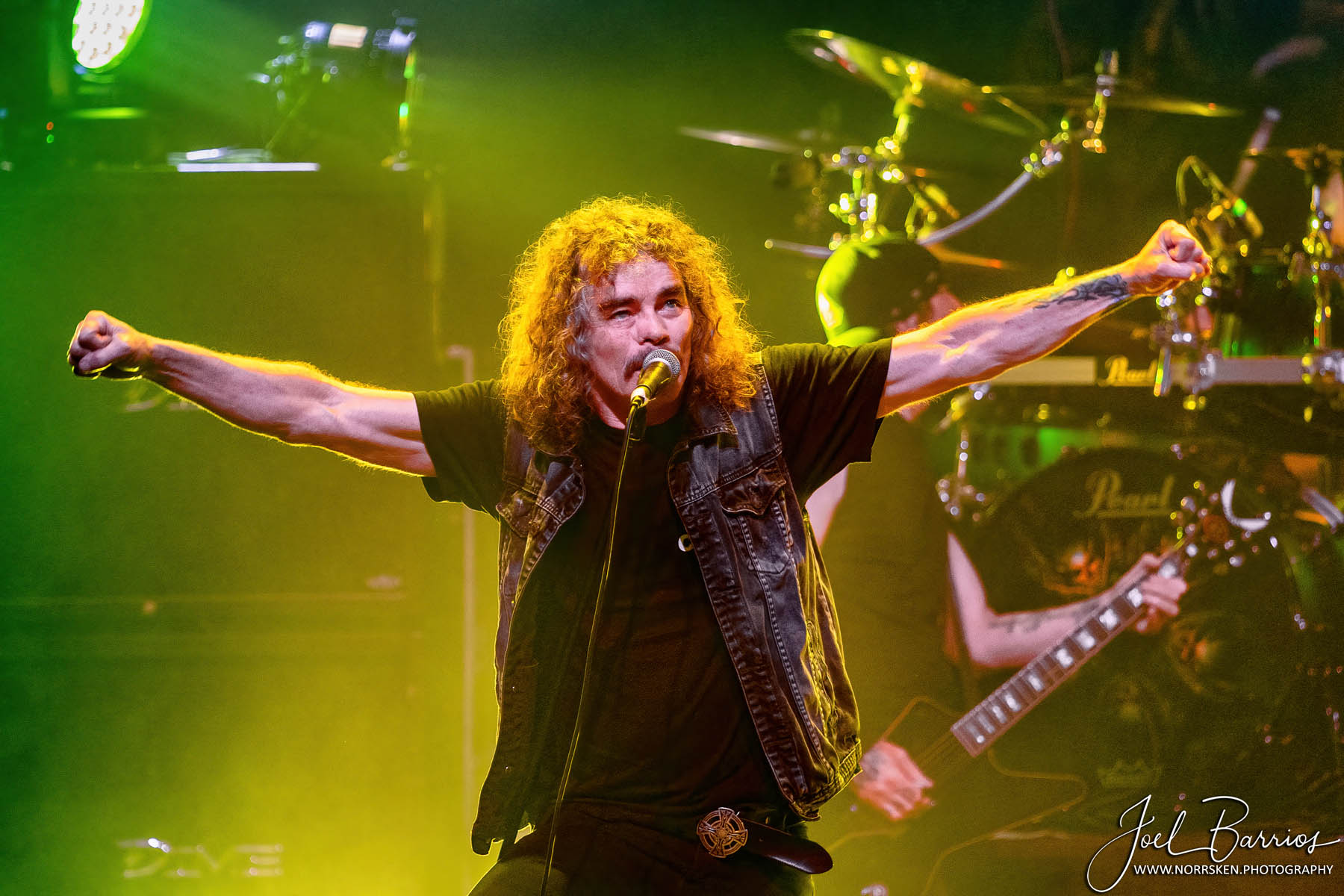 The first single from “The Electric Age” album came next in the form of “Electric Rattlesnake”, a track where a rapid fire thrashing approach is extended with a set of hard edged breakdown/interludes that are slightly oriented towards the early 90s half-thrash sound. An expansive discography at their fingertips, it was impressive to see the energy with which the band dug their heels into their longstanding anthem “Hello From the Gutter,” taking us to the 80s with “Under The Influence” better known cut, and arguably the band’s most popular anthem. If Van Halen ever wrote a thrash song, this is the one. Rich with hard rock riffing diffused into punk restlessness, plus a touch of power metal in Blitz‘s vocal assault, it is easy to see why this cut has inspired enthusiasm among fans for decades.

A set-list full of crowd-pleasers continued with the fury with “Ironbound”‘s staple track “Bring Me the Night.” This track has always sounded to me like how I would imagine the devil when he’s really irritated. It’s fast, aggressive, and Blitz really lets loose here. Angry lyrics cut through the air like a katana… “Pray to God it never stops, ready to fly; and I’m ready to die, fuel me up, let me go, shut your mouth, going to blow…”  and I swear this has been the most powerful interpretation of this anthemic song, driven by Jason Bittner’s passionate delivery from a drum kit that sat on a platform perched above his band-mates. It was a stunning show of instrumental dexterity from the band’s newest member – and world renowned drummer – who joined Overkill just before the recording of “The Wings of War.” 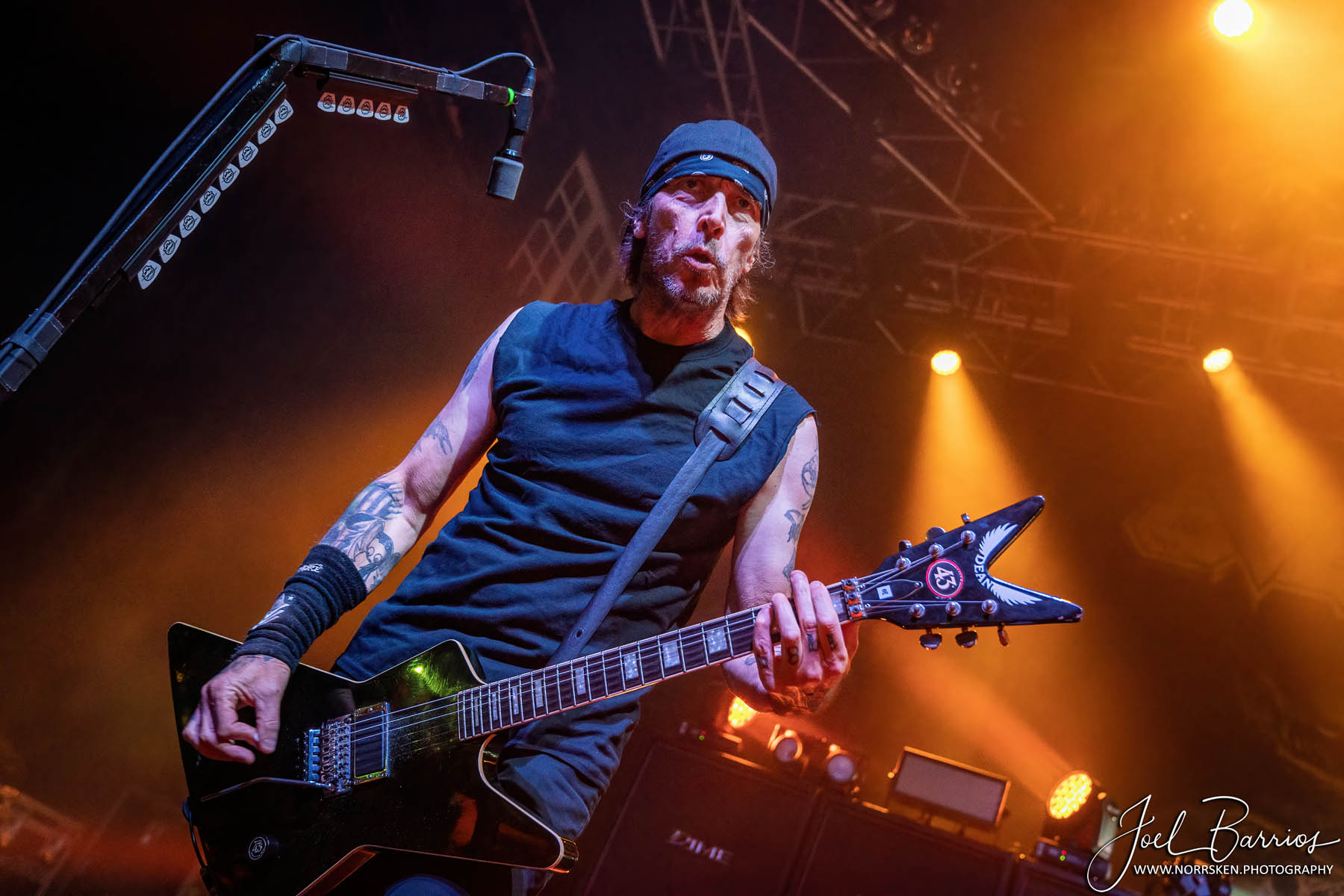 The thunderous “Head of a Pin” followed, a colossal cut, specially showcasing the chugging ,bounding bass lines of founding member and bassist D.D. Verni. One of the most dependable anchor-men in the business, Verni makes himself an invaluable centerpiece amidst thick layers of hammering guitars. Where Blitz has euphoric charisma, Verni has a sphere of intense control that borders on serenity, his character one built on grit and reliability as he wields his bass. This song is pure undaunted Overkill, with Ellsworth sneering, snarling and shrieking away like a fuckin’ banshee with that trademark New Jersey attitude, while the thick layers of guitars felt like real hammers…

One of my all-time favorite songs from their truly vast catalog, “Necroshine” was another highlight in the already magnificent set-list. After the progressive/ambient intro to the song, the music pulls you right into headbanging bliss, with a great semi-industrial thrashy riff, one that has always sounded to me as one of the heavier they have ever written… but they still had a few surprises under they sleeve. Coming from a record that really left a mark in my listening rotation of the 90s, and one I’m sure they haven’t played in a very long time before this tour, a “W.F.O.” one-two punch came in the form of “Under One” followed directly by “Bastard Nation,” both tracks doing well to channel the anger of Blitz’s screams and highlight the masterful dexterity of guitarists Dave Linsk and Derek “The Skull” Tailer. The catchy choruses and uplifting rhythmic-section took hold of the airwaves, and I found myself singing at the top of my lungs “Did they say we were hard? Did they say we were separation? Citizens of a bastard nation?” 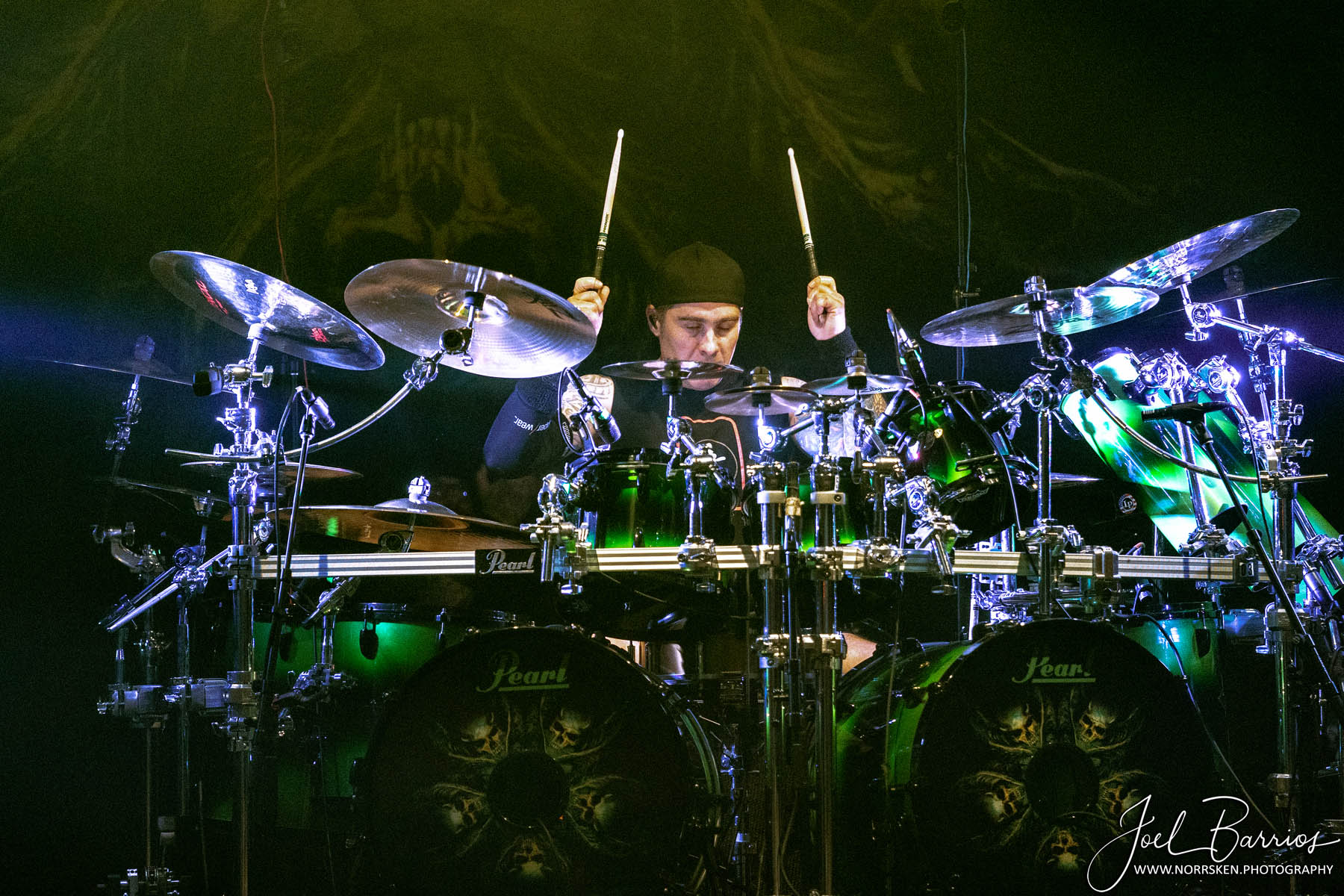 Touching on “The Grinding Wheel” album, they opted for “Mean, Green, Killing Machine”, proving they can keep their thrash roots firmly in check while mixing in some groove and dark malevolence into the formula. The melodic “chant” near the end there with the pounding riffs in the background sends chills down my spine every time. Nonetheless, the most surprising moment happened when they brought forth the rarely-played title track from their debut album “Feel the Fire,” sweeping the stage with a heavier presence than the original 1985 recording. Upon the song’s conclusion, Blitz addressed the audience with smug glee: “You guys didn’t expect this shit, did you?” Never leaving a chance for a dull moment, they served up another trademark moment: “Ironbound”. A true riff-furnace, this song ups the ante in the speed department, as well as in catchiness, throwing in unforgettable gang to lead interchange choruses that hits the ears with the fury of a thousand sledgehammers. The show could very well ended here and it would have been one for the ages. However there was more… 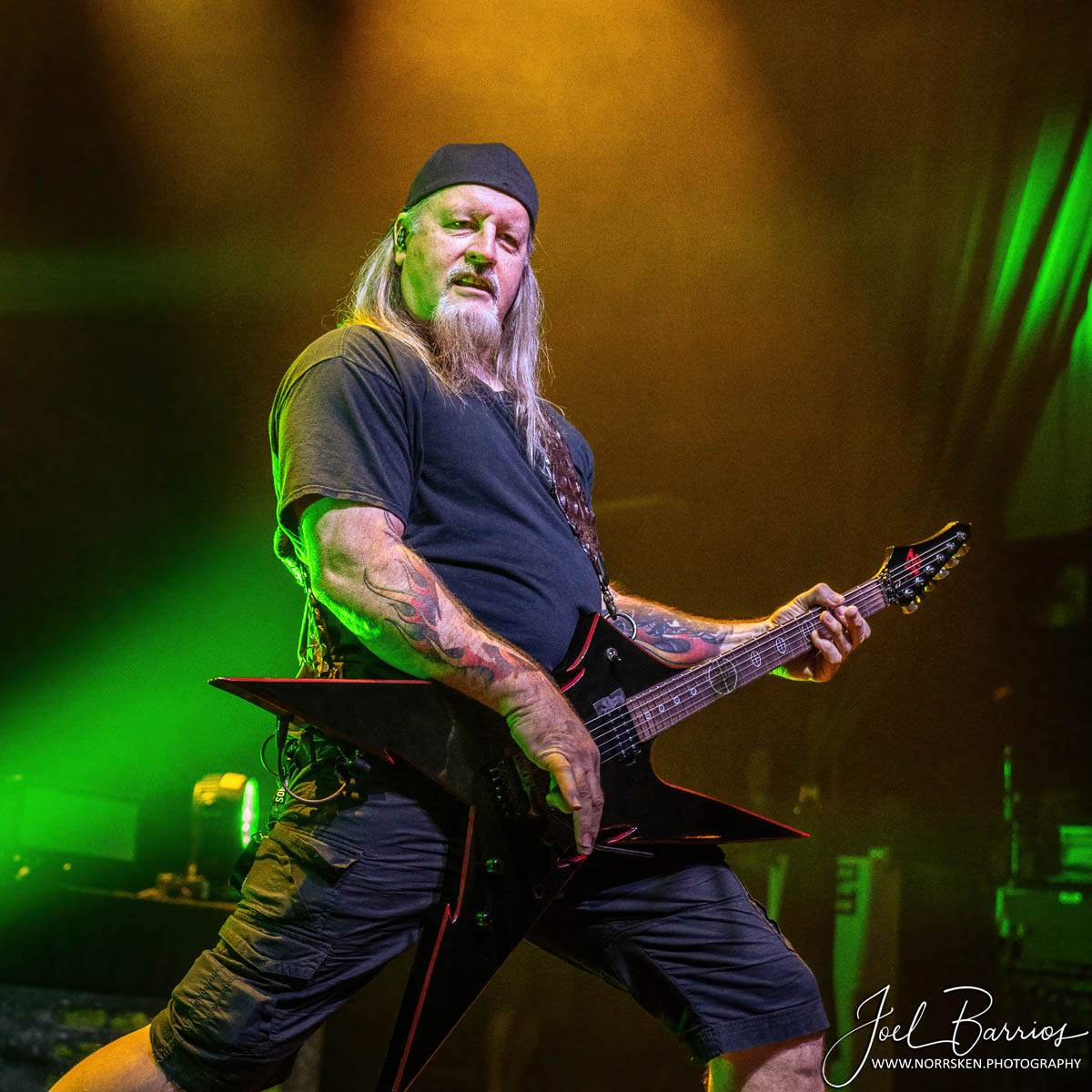 In the realm of the expected and the extraordinary was the band’s final encore, which consisted of not one, not two, but four cuts. The opening salvo of my Overkill favorite album “Horroscope”, the menacing intro of “Coma” added an eerie touch to the venue atmosphere, the picture-perfect backdrop for the guitar tandem to arrive crushing, taking no prisoners. Bittner drumming on this one really took it to another level, and believe me when I say I’ve listened to this song a million times. But it wouldn’t be an Overkill show if they don’t play two songs “Rotten to the Core” and “Fuck You”. The first is a standout track from their debut album “Feel the Fire”, and has become a true unmissable ritual, to the point that they have played it 679 times since the first time, back in February of 1984. Heavy as hell and riff-driven, it can raise the multitude energy level better than a six-pack of Red Bull, and this night was no exception. With the ability to drive the crowd into a moshing frenzy, it’s a safe bet that few fans know that this Overkill‘s classic is actually a cover from punk rock band The Subhumans. Bobby led the crowd “flipping the bird”with both his hands, while spitting out the simplistic but effective lyrics, enacting the crowd energy one more time. Half way through “Fuck You”, they interjected with a track from their latest studio offering, the punk-infused, neck-breaking tribute to their origin New Jersey “Welcome to the Garden State”, which Bobby sarcastically announces as “Welcome to the Sunshine State.” After “Welcome to the Garden State” ran its course, the “Fuck You” reprise was met with renewed enthusiasm from a sea of sweating bodies. 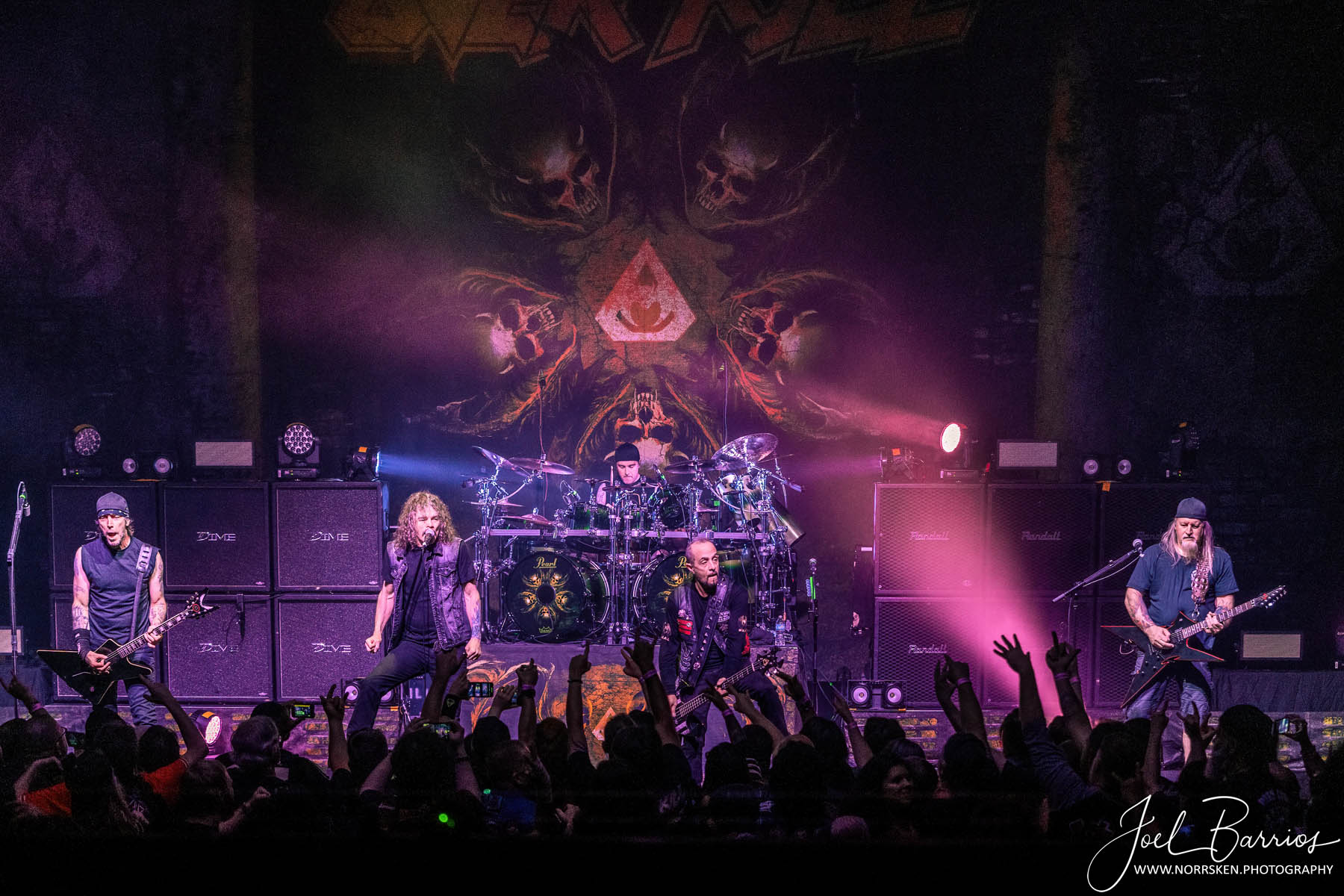 Despite playing for more than 90 minutes, often crossing well into the strenuous pacing of speed metal, the thrash legends seemed just as enthused as when they walked on the stage. Blitz radiated with sweat and a sheen of satisfaction as the encore drew to a close, the applause and screams from an eager crowd mixing in euphoric celebration. As the lights fell, there was no question as to why Overkill have been heralded as the ambassadors of trash since the genre’s very inception, as they seem to get stronger each time I see them. The addition of Jason Bittner to their ranks has been a blessing – their previous drummer was no slouch to be honest – but Jason is a true maniacal drumming machine. D. D. Verni is arguably the greatest metal bassist you never heard about, his role absolutely vital even when the guitars felt so predominant, and both Linsk  and Tailer performances are of skull-crushing nature… and Blitz, well he doesn’t seem to age. I wonder how the hell he still sings and shrieks the way he does, but I’m hoping that he doesn’t stop anytime soon, and neither does the band, “because we don’t care what you say… just f*ck you!”

Last Man Standing / Electric Rattlesnake / Hello From the Gutter / Bring Me the Night / Head of a Pin / Necroshine / Under One / Bastard Nation / Mean, Green, Killing Machine / Feel the Fire / Ironbound