England’s black/gothic/extreme metal veterans Cradle Of Filth has been bashing the ears of metal fans since 1991. Through their long career the band’s musical style have evolved from their original corrosive black-metal beginnings to a cleaner and more “produced” amalgam of gothic metal, symphonic metal and other metal genres, allowing them to continuously resist a definitive categorization. Their lyrical themes and imagery are heavily influenced by Gothic literature, poetry, mythology and horror films, sometimes triggering them to be perceived as Satanic by casual observers, even though their use of Satanic imagery has arguably always been more for shock value than any seriously-held beliefs. Their current album, released back in September 2017 via Nuclear Blast, is titled Cryptoriana – The Seductiveness of Decay and the blackened sextet are headlining a North American Tour, bringing Ukrainian metal outfit Jinjer along with them.

When I walked inside the general admission are of the Revolution Live, the opening act Uncured had finished their set. I quickly went to find my preferred spot: a short stairwell located in the center and all the way back, near the mixing console: the perfect place where to have eagle-sight view of the rather elevated stage. I must confess I haven’t checkout out Jinjer‘s music; my main reason for covering the show was Cradle Of Filth. They appeared on stage shortly after, and immediately unleashed their heavy, groovy, disharmonic and technically tricky djent-style music, with strong nuances of death-metal, nu-metal, metalcore and even progressive rock. Singer Tatiana Shmailyuk was certainly the center of attention, showcasing an effortless – and at times sensual – combination of gurgling growls and goose-bump raising clean singing, meanwhile the instrumental wall created by her band-mates pushed the live performances to its limits. Their live mix was well-balanced and despite the lighting was almost nonexistent (mainly responsible for the absence of more pictures in this article) they sifted through their six-songs set striking a great balance between musical complexity and brutal neck-breaking groove. They have quickly become a talked about band in the metal landscape today, and I’ll be checking their most recent album to see if their studio work fares at the same level. 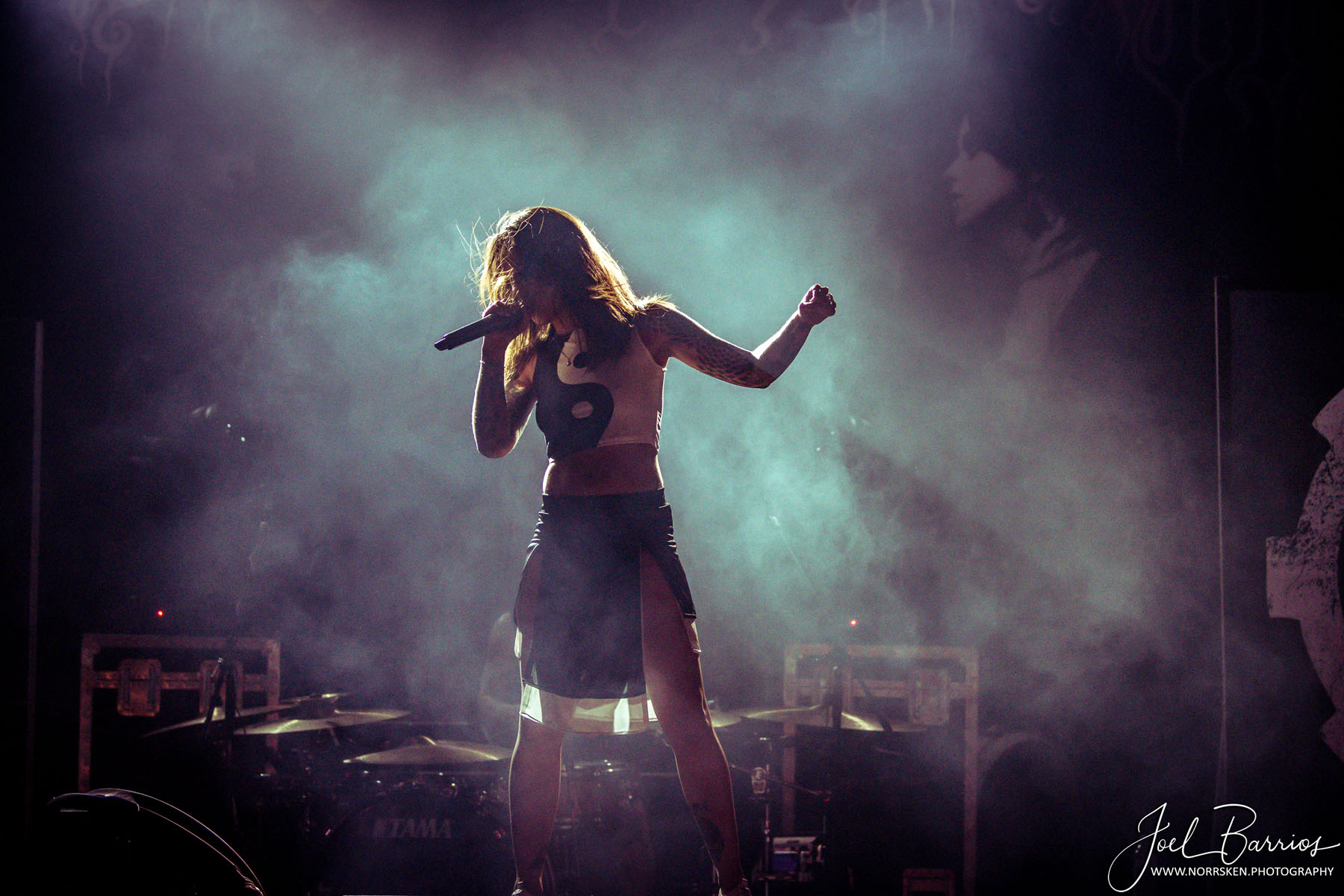 At 9.30 PM the stage was ready for Cradle Of Filth. A stunning, large painted backdrop resembling the cover of their last studio album had been adorning the back of the stage since Jinjer was playing, and a drum-cage surrounded by tall acrylic panels had being unveiled. With the notes of “Ave Satani” playing over the PA, the silhouettes of the musicians slowly appeared and took positions, their faces barely visible through the smoke and the rotating blue lights. Almost 100% of the times Cradle of Filth open their albums with a gothic, symphonic and sometimes creepy keyboard introduction that eventually segues into a super-fast track, and this case was no exception, they dived headfirst into “Gilded Cunt” with the audience joining the metal rapture with a massive roar.

As usual, singer Dani Filth appeared in a striking and imposing action-fitting outfit, combined huge gothic-metal boots and a jacket with massive killer rivets. His voice has aged like good wine, he still manages to shriek like a banshee and smash audiences with his unfathomable vocal range. A wealth of riffs moving between thrash and black metal, Iron Maiden-inspired guitar melodies, unrelenting percussion, colossal keyboard arrangements and choral interludes, shredding guitar solos courtesy of the duet of Richard Shaw and Marek ‘Ashok’ Šmerda, and the multi-layered vocals of Dani conformed a truly overwhelming and aggressive harmony of distortion that plummeted over the heads of a incessantly moving moshing crowd. Nevertheless, their whole show suffered from the worst live sound I’ve ever experience in that venue. Dani’s vocals were so extraordinary high in the overall mix that they drowned the sound of his band-mates and pierced through my ear-protection to the point I had Tinnitus-like ringing for hours after leaving the place. Whoever was in charge of FoH truly did the band a disservice. In addition, the reason why some metal bands prefer to flood their live performance with audience-facing strobes and sempitern blue or red stage lights really escapes me. One thing is to work creating an overall dark and gothic atmosphere as the perfect companion for your music, and a different one is to accentuate it to a point that impairs the minimum chance for media professional to score any decent photographs of the event. 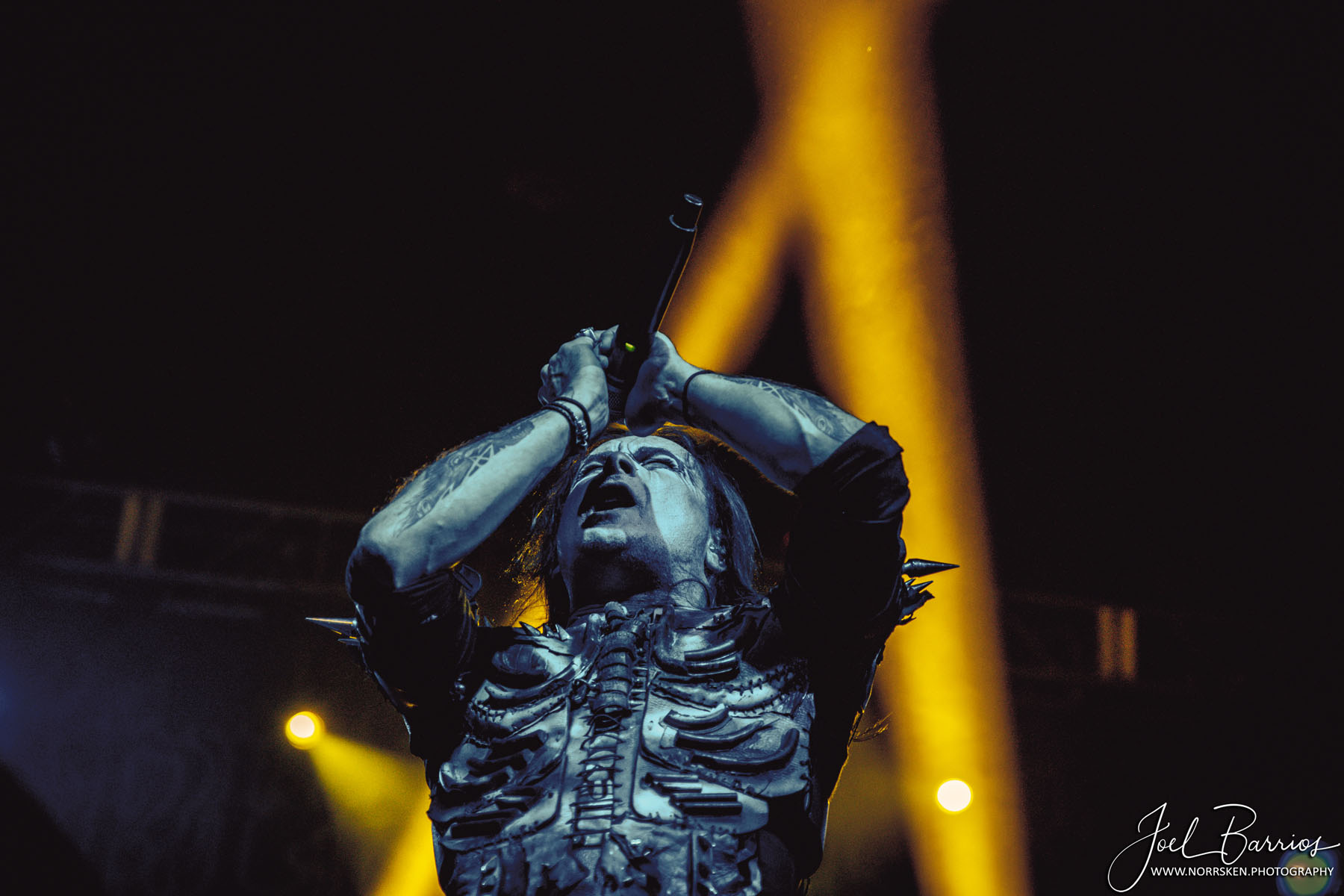 Dani Filth screaming at the mic

Putting the audio issues aside, during the hour long set and the unheard of six-songs long encore, Cradle Of Filth did what they do best: deliver an epic storm of jaw-dropping leads and licks, soaked in a sublime and sheer gothic atmosphere and cunning dynamic shifts, one that rendered every fan physically and mentally exhausted by the time the last musical note faded. New and old fans rejoice, Cradle Of Filth released a widely acclaimed album with Cryptoriana – The Seductiveness Of Decay, and their live show is a proof of an unquestionable return to form.

Gilded Cunt / Beneath the Howling Stars / Blackest Magick in Practice / Heartbreak and Seance / Bathory Aria (Benighted Like Usher, A Murder of Ravens in Fugue, Eyes That Witnessed Madness) / Dusk and Her Embrace / The Death of Love / You Will Know the Lion by His Claw

Encore: A Bruise Upon the Silent Moon / The Promise of Fever / Nymphetamine (Fix) / Her Ghost in the Fog / Born in a Burial Gown / From the Cradle to Enslave