If I was to make a list of my favorite bands which also happen to be very underrated, and whose contributions to the universal landscape of music are unjustly overlooked, Flotsam and Jetsam would be at the very top. Hailing from the scorching hot state of Arizona, these thrash metallers’ body of work have been a mainstay in my listening rotation for well over two and a half decades. There’s very few to say about Flotsam and Jetsam that I haven’t said before. If you consider yourself a metal-head, especially of the old guard, then you certainly know what I’m talking about. With a 30 plus years career not estranged to mishaps and dozens of line-up changes, Flotsam and Jetsam can be counted among the elite of the 80’s thrash-metal bands that have proved just how relevant they remain, with a rebirth of their classic sound for listeners of the modern age. Last time they graced a stage in the Southeast portion of Florida, I was there and when I knew they were returning – relatively close to home – in a tour with HammerFall, the event was filed under the “can’t-miss-it” category. 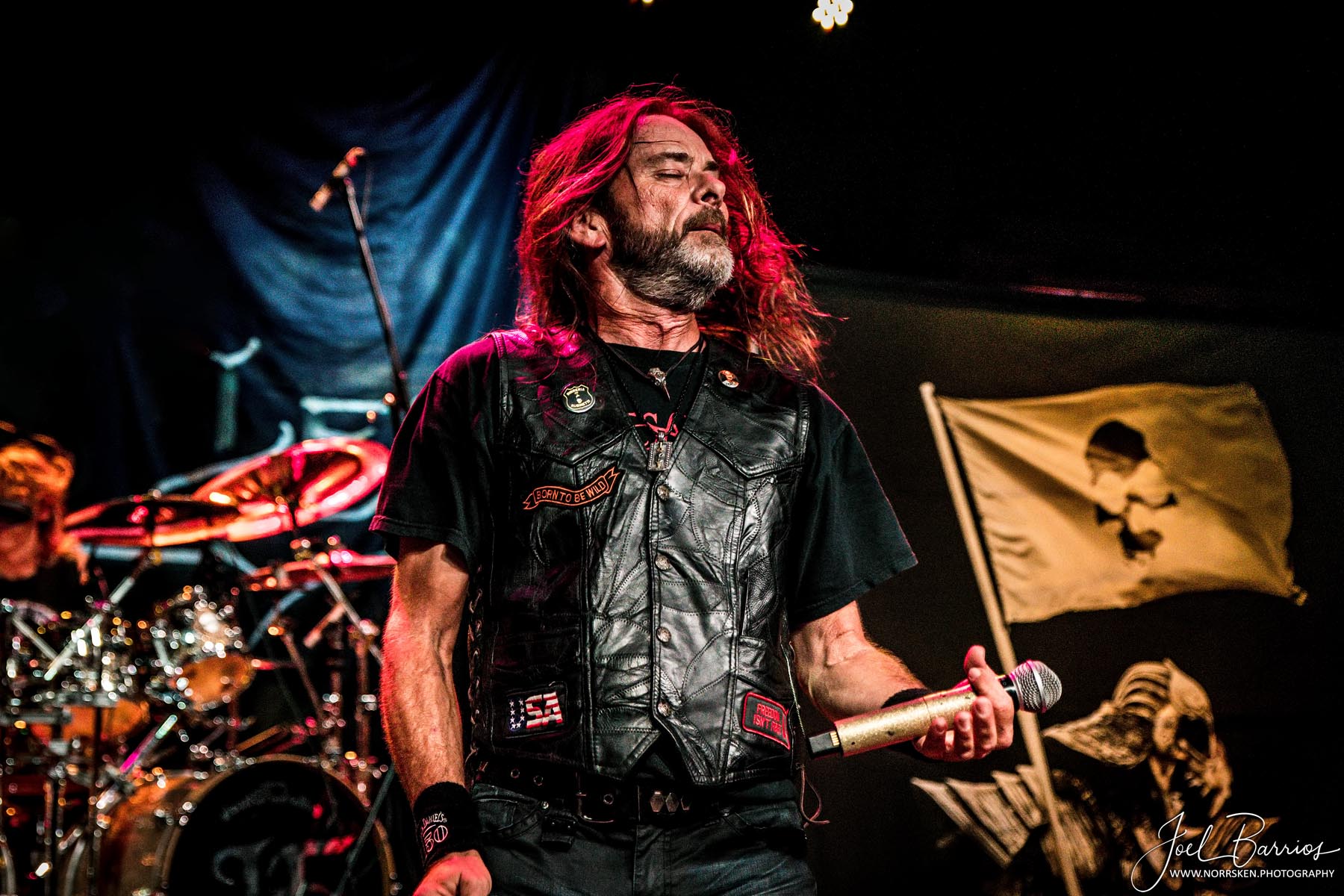 I arrived at the venue just minutes before the beginning of their set, and precisely after the last of the four local opening bands were done. The final touches in the stage were underway, soon the lights dimmed, and the house erupted in cheers. The attendance was not spectacular, but they made noise equivalent as if it was a stadium-packed crowd. The silence was abruptly broken by the initial notes of “Hammerhead” off their landmark debut album, a speed-thrash dynamite that immediately displayed all classic Flotz elements, with Michael Spencer’ relentless bass lines cutting like a saw and creating a main focal point, opposing the five strings plump sound to the guitars chords, while Eric A. K. Knutson sang the epic initial lines “Hello! How are you? Ready tonight?/ I’m here to show you”. From the get go was more than apparent these 5 guys were on top of their game, sounding fresh, spontaneous and inspired, without losing an inch of power and fierceness. Blazing through a really short set-lit of only 9 songs, their on-stage attitude was a feast to the eyes, with Michael Gilbert and Steve Conley, trading one blazing lick after another, Eric sounding incredible all night – with the highlight being his melodic phrasing on “Iron Maiden” off their self-titled album, a record that served to brush aside the naysayers, and arguably has become what might be their greatest opus since No Place For Disgrace hit the shelves 30 years ago – and recently recruited drummer Ken Mary pounding the drums like a possessed, twirling his drumsticks in the air and adding an extra staggering ingredient to the spectacle, dissipating any possible doubt about his abilities to replace Jason Bittner.

Despite I would had loved a much longer set, perhaps with the inclusion of “Verge of Tragedy” and “Empty Air”, Flotsam and Jetsam simply nailed it, upholding a wealth of vigor and enthusiasm throughout their performance that confidently makes me say they are likely enjoying a peak moment in their career. Everyone had a huge smile painted on their face at the end of the momentous show. 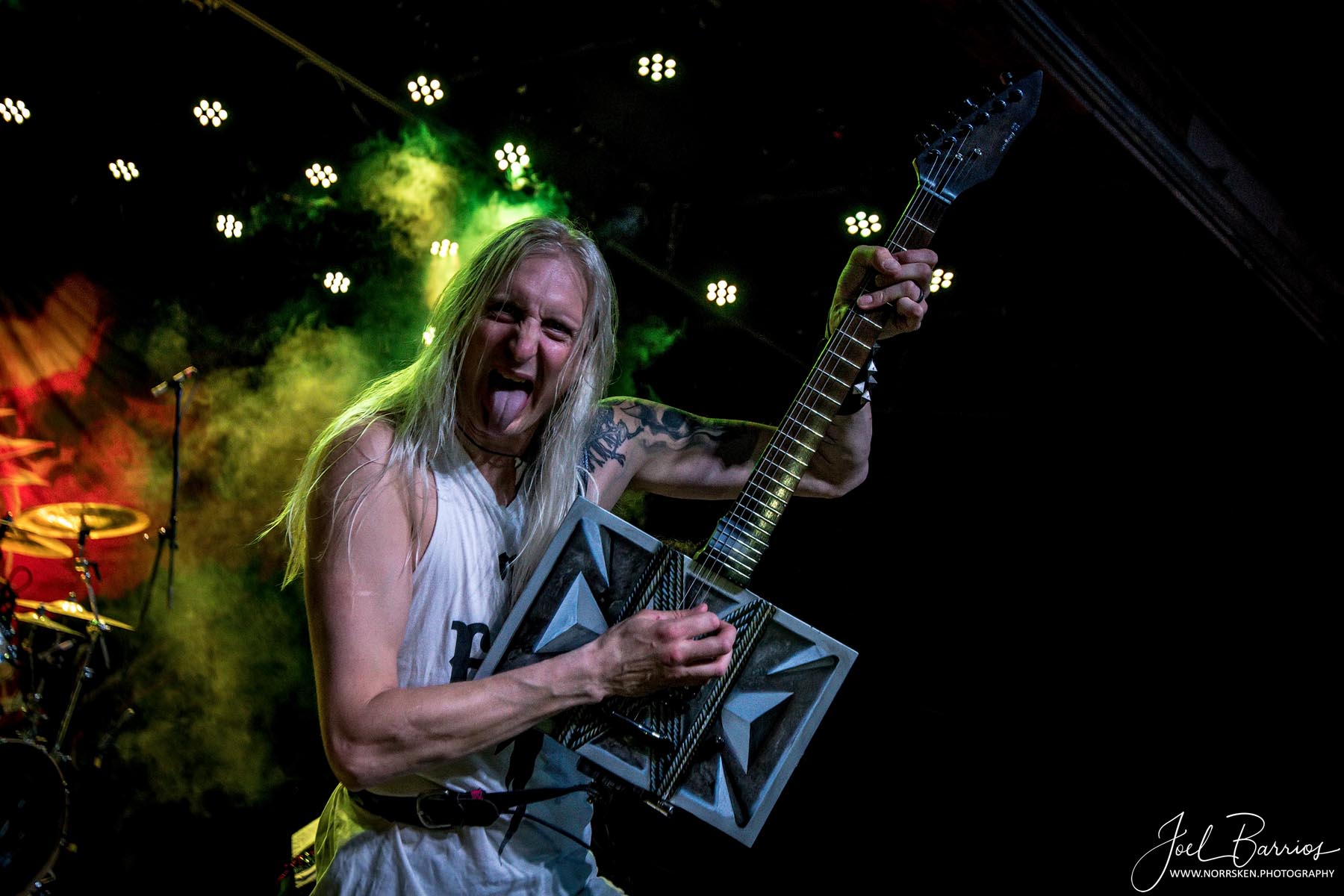 The ever-animated Oscar Dronjak with Hammerfall

Should the night had ended there it’d had been a great evening of metal. But there was another band yet to come: the headliners HammerFall. The Swedish quintet are now a 20 plus year veterans in a business that produces very few new acts each year that look, sound and feel, and are able to keep the metal flame burning. A no-frills, unadulterated and anthemic heavy-metal act, when they hit the stage you can feel the oomph shift in the venue and ever fan’s eyes glued to the stage. The whole set was the perfect mix of old and new tracks, with the crowd singing along in some sort of ecstasy, a mesmerizing metal-pervaded trance. The band’s lead vocalist Joacim Cans sang with a voice created on the metal forges of heavens, assembled in the same production line of legends like Dickinson, Halford and Gillan. He moved incessantly showcasing a perfected front-man attitude to expertly pocketing the audience, owning the night effortlessly. The two guitarists, Pontus Norgren and Oscar Dronjak, banged heads in tandem over thick riffs, while Norgren‘s did the maniac-sounding soloing, and Drojnak took over all the melodies and joined in on tandem lead. Bassist Fredrik Larsson played solid wallop and added to the vocal chorus, while drummer David Wallin provided the backbone rhythm structures and made double-kick drumming seem as a walk in the park.

A truly visually entertaining and professional show paired with accurate and on-point live sound and mix, HammerFall put out an authentic heavy-metal fest with a strong traditional touch, one that transports you to an alternate dimension of medieval warriors, rape and pillage, glory and honor. They are amidst their North American tour which extends until late June, do not miss them if they come to a city near you! Horns up!