Ever since I listened to “Doomsday for the Deceiver” for the first time, I fell in love with Flotsam and Jetsam. That debut album was pure in-your-face thrash metal statement and can be cited as a classic of the genre along with “Reign in Blood”, “Master of Puppets” and some others; showcasing great musicianship and complex structures. Sadly, destiny always reserved quite unfair things for Flotsam and Jetsam. This band is way too overlooked and criminally underrated, and they never received the popular recognition their music deserved. Nonetheless that did not impede me to closely follow their career for the last three decades, a career undermined with ups and downs and periods of inactivity, but always getting huge points for perseverance and stick-to-it-ness. Earlier this year they put out their new record simply entitled “Flotsam and Jetsam”, for which I personally wrote a review. With a now 60% revamped line-up now consisting of Jason “drumming-machine” Bittner, Steve “riff-powerhouse” Conley and Michael “sick four-strings” Spencer (who was the first official bass player after Jason Newsted’s departure to Metallica in 1986 and toured with Flotsam in 1987 to Europe on Megadeth’s “Peace Sells” tour) alongside founder members Eric A. Knutson and Michael Gilbert that self-titled record is up there within the best three thrash metal albums of the year in my book, probably in the company of Megadeth’s “Dystopia” and Metallica’s “Hardwired… To Self-Destruct”. A magnificent and intricate heavy metal statement, these guys managed to reborn and bring to life a jam-packed 12-tracks masterpiece which even rivals their debut. 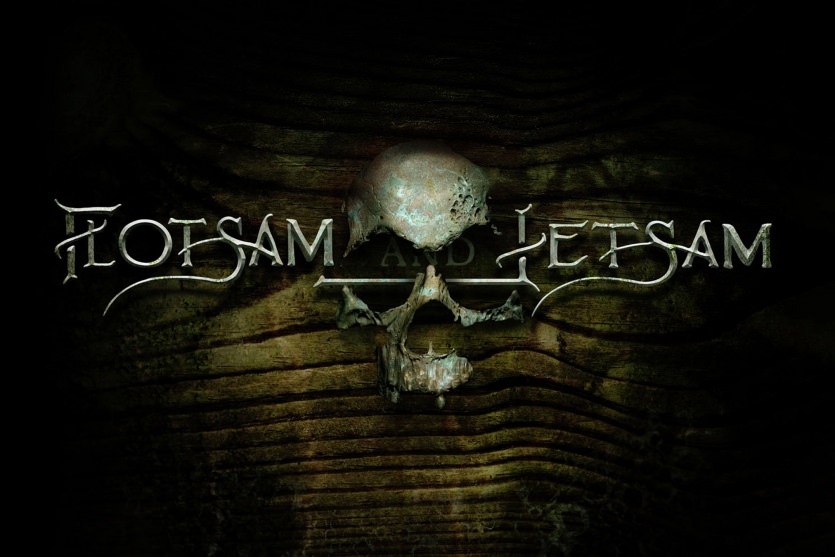 I’m unsure whether signing with a new record label, or bringing back Spencer and incorporating two first-class musicians as new members (who seemed to have gelled seamlessly), or any other reason I’m unaware of (maybe the sum of all the parts) but Flotsam and Jetsam is now a fully functional well-greased engine, most probably better than they have ever been, and the ultimate proof of that is the constant touring the band has been involved into since the release of the record. One of those tour stops brought them to the West Palm Beach area, and an old metal-head like me happily drove for around an hour to see them play. Funnily enough they had stopped earlier in the day at the famous “Rock N’ Roll Ribs” restaurant owned by none other than Nicko McBrain, the legendary Iron Maiden’s drummer, and they had the chance to invite Nicko to the tour bus and played “Iron Maiden” for him, a song off their newest album which is a true kick-ass killer tune, sporting one of the most difficult vocal lines on the record and some amazing galloping bass lines in a true Maidenish fashion. Needless to say Nicko loved the song and praised the way they put it together.

The Piper’s Bar and Grill, as the name implies, it’s a small indoors bar with an stage area, known for his great food. We arrived when the set of Helstar (A Texas heavy metal band touring with Flotsam and Jetsam) was almost over. There was a fair amount of metal fans already inside, yet the place was far from being packed. Around 10:15 the guys came on stage and pushed the gas pedal with “Seventh Seal” the fantastic opening salvo off their admirable self-titled release; and one thing was clear immediately: they are revitalized, sounding as tight as ever and quite enjoying themselves on stage. Eric continues to defy the pass of time, nailing those piercing high notes we all know him for (I asked him after the show how he stills manages to pull them off, and he laughed and said he doesn’t even know). Jason brutal and precise pounding seconded by Michael powerful low-end notes navigates all the speed/ tempo change with ease, while adding the perfect sonic bed for Michael Gilbert and Steve Conley blazing and relentless guitar riffs. Choosing to dig into their back catalogue they continued with “Dreams of Death” and “Hammerhead”, the latter propelling the crowd excitement levels; while Gilbert and Conley traded insane licks, one after another. After giving another nod to their newest offering with “Monkey Wrench” they continued dusting off their metal anthems with “Desecrator”, followed by “Me”, the initial song from their 1995 album “Drift” which has an special place in my collection and was a really unexpected surprise. Then Eric announced they would play a song for which they had put a video out, and the furious and ass-kicking “Life is A Mess” dominated the airwaves for the next 4 minutes, with its headbanging riffs and infectious bass grooves. “She Took an Axe”, “Hard on You”, and “I Live You Die” brought me back to my teen years of listening to “No Place for Disgrace” from a cassette tape played in a monophonic tape recorder, and the enthusiastic and fevered audience sang the songs lines while raising their fist and throwing metal horns in the air.

Another 1995 outstanding track, “Smoked Out” had an special extended lead/break from Gilbert and Conley, before Eric announcing they will play “A song off our new record which is a real pain in the ass to sing live”. Right off the bat I knew he was referring to “Iron Maiden”, and I was dead right. I had wondered how he would manage to sing the complicated and layered vocals, but once again he sounded incredible and delivered the goods. Noteworthy the fact Jason handle all the second voices throughout the whole set (Is additionally difficult to play drums at that level and also sing) while Michael Spencer and sometimes Gilbert helped out with some verses and growls. A phenomenal selection of three songs closed their conquering performance: “Empty Air” which is probably one of my top five favorites songs from their entire discography and sports one of the most ruthless guitars riffs ever written in history (Once that would make Tony Iommi look pale) paired with a sumptuous keyboard intro; the odd-ball of the night “Suffer the Masses” which comes from a record in which they stripped down their sound a bit and emphasized in melody departing the thrash metal zone, and finally the usual staple and simply terrifying “Doomsday for the Deceiver”, a completely brilliant track which saw them throwing each bit of extra energy to leave the crowd musically exhausted and claiming for more. 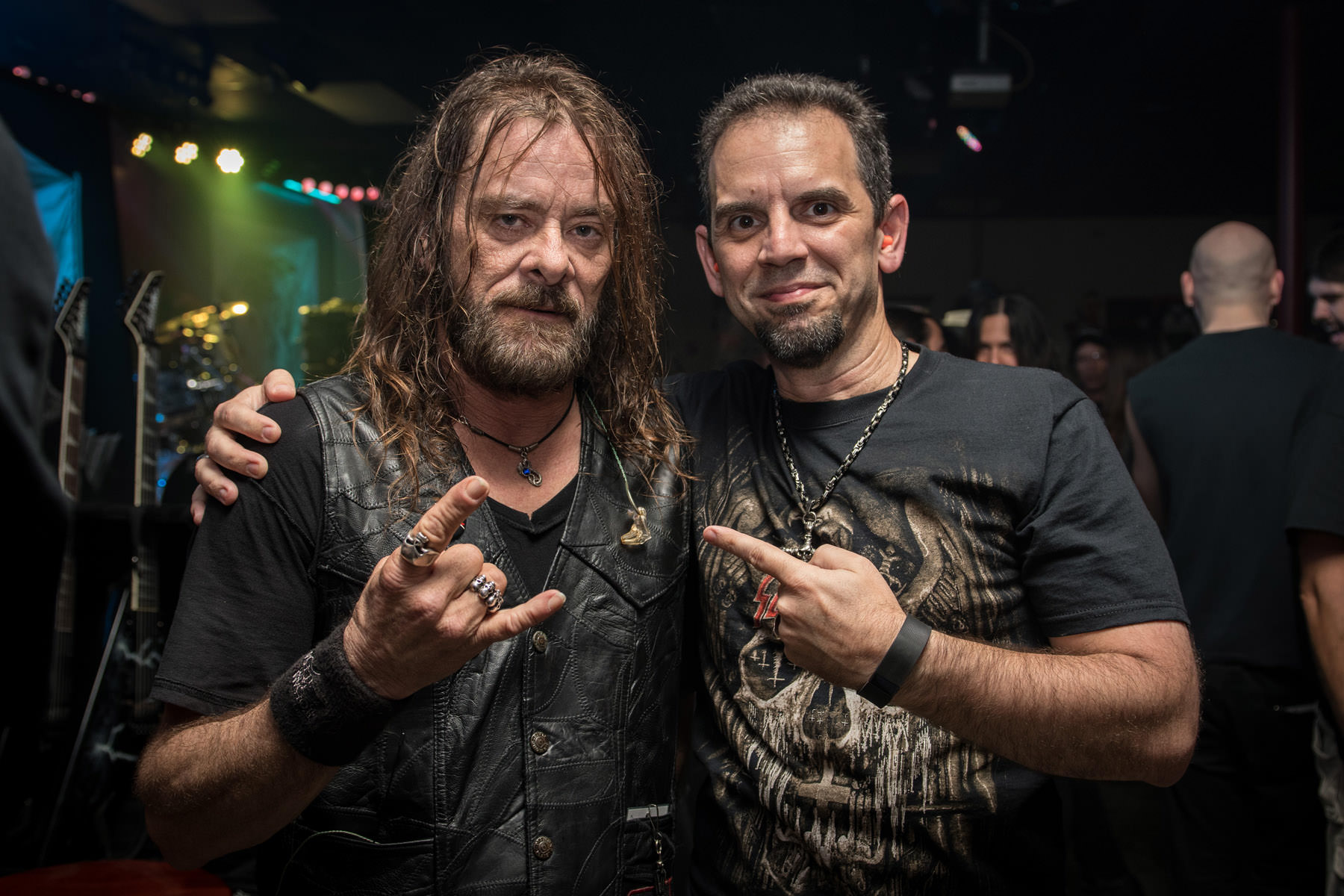 Eric A. Knutson and myself after the show

After chatting briefly with Gilbert and Eric we left the venue, with a big smile painted on our faces, but not before swinging by the merchandise table to buy the limited red vinyl edition of “Flotsam and Jetsam” which I also have in gold and black. I’ve said it before and I will say it again: I love the feeling transpiring from this incarnation of the band. They offered us with a stunning album this year, and I have the hunch they are unlocking the potential in them once again, making a high water mark in the beginning of a new chapter in their book. On stage the band shreds with a reckless abandon and pinpoint focus that they have been missing for some time. They have proved that they still have what it takes and I couldn’t be happier about it!