Young and rising hard rock upstarts Greta Van Fleet kicked off the March of the Peaceful Army tour at the Bayfront Park Amphitheater in Miami, Florida last May 7, 2019. The Miami’s downtown skyline served as a perfect backdrop on a balmy spring night for the young Michigan rockers. The tour is supporting their debut album, Anthem of the Peaceful Army, released in October of 2018. They also have two EP’s Black Smoke Rising and From the Fires, released in 2017. The band will tour North America through June 4, 2019 before heading to Europe.

Made up by siblings Josh Kiszka (vocals), Jake Kiszka (guitars) and Sam Kiszka (bass, keys) along with Danny Wagner (drums), Greta Van Fleet stock on trade is classic hard-rock jargon rooted in the best vein of bands from a long-gone era; and despite all the negative buzz, the countless comparisons, and being referred to as the poor’s man second-coming of Led Zeppelin (haters will hate, you know that by now), these four kids showcase confidence and an assertive stage presence that is certainly splendid.

While standing in the photo pit I looked around, assimilating the arriving crowd and its peculiarities. I saw people of all ages, styles, all demographics. It was an eclectic mix of the traditional teenybopper fans that are drawn to young bands, millennials and even a fair mix of baby boomers and Gen X’ers that were more likely to have been fans of classic rock than brand new rock. 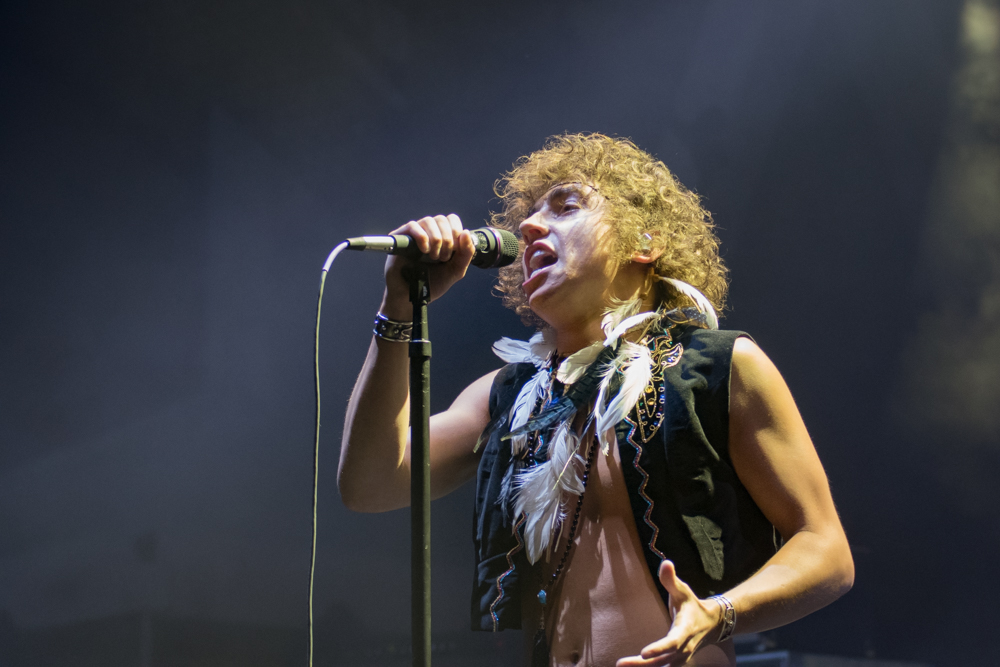 Since the very first notes, Josh was hitting the signature wails that Greta Van Fleet has become known for, yet he’s far from being the only talented member of the foursome. Jake’s guitar riffs and blistering solos were on par – or better – than many guitar virtuosos many years his senior; while Josh kept the crowd engaged as he covered every inch of the stage. “Lover, Leaver” and “Watching Over” proved that the band has zero intentions of backing down from creating ginormous rock anthems, meanwhile “You’re the One” displayed their abilities to stretch their songwriting by incorporating a beautiful ballad. These kids have the stage presents to boot, and while they are still honing their craft, it’s impressive how self-assured their demeanor are. During the latter part of the set, they broke into an extended jam session led by Jake and Danny, whose thunderous back-beats and epic grooves paired perfectly with the another-realm guitar pyrotechnics. Sam alternated between keys the four strings, adding an additional layer to the sound with the incorporation of the Hammond organ.

The clamoring of pleased fans backed up the crunchy rock riffs and the well-executed melodies, courtesy of these four young musicians who are clearly built to carry out the torch of good old hard-rock music. Overall, the show was excellent and far exceeded my expectations. There are only a handful of dates left in North America before the band takes the March of the Peaceful Army tour overseas to Europe through November of 2019. Greta Van Fleet are here to stay, and they might have one foot intertwined in the glorious sauce of their predecessors, but they have their own flair and it’s fascinating to behold how they continue to develop their own style. A superb band exuding a contagious live energy, they are definitely worthy of your attention. We all have different tastes, as that’s how we interpret all art – music included. My advice for you? Just go and see them playing, and you’ll understand what I’m talking about.

When the Curtain Falls / Highway Tune