Eccentric and controversial, Swedish GHOST has become a rising musical phenomenon over the course of the last decade. Their particular approach to music, which keeps defying categorization – it’s been classified as heavy metal, hard rock, doom metal, progressive rock, psychedelic rock, pop rock, occult rock and arena rock indistinctively –, began with a 3-track demo followed by a 7″ vinyl titled “Elizabeth” back in 2006. Three albums later, the band has seen their status cemented as one of the most popular and widely praised acts in the musical landscape nowadays, catapulted to critical acclaim and high record sales, earning the 2016 Grammy Award for Best Metal Performance with “Cirice” and landing at number 3 on the Billboard 200 with their most recent studio album “Prequelle”.

Too simplistic and poppy for progressive-rock lovers, not caustic enough for black and death metallers and carrying the devil’s message for those who don’t listen to music if it deviates from the scriptures principles, part of GHOST appeal for the masses lies in a very smart recipe. On the musical side they combine blatantly Satanic lyrics – a good example is the song “Year Zero” which features a “Hail Satan” chorus and the naming of several aliases for the Devil or other demons – with harmonies veering from classic rock to the extreme underground metal bands of the ’80s to film scores and everything in between: you might find bluesy swagger, Swedish traditional melodies, theremin-like guitar melody and more.  On the spectacle side, they have paired occult-rock with a universe of their own making, to the level of creating their own on-stage impersonations as the antithesis of the Roman Catholic Church members: every instrumentalist – otherwise known as The Nameless Ghouls – wearing virtually identical, face-concealing costumes and the band leader Tobias Forge portrays a character known as “Cardinal Copia” whose costume consists of either Cardinal vestments or a black or white tuxedo alongside a prosthetic mask with black eye makeup and multi-colored eyes.

If you haven’t ever seen GHOST in their live element and if you are unfamiliar with their catalog, all of the above probably doesn’t make much sense to you, or sparks your curiosity. Believe me when I say this: you absolutely MUST catch these guys playing before your metalhead energy fades away with time. I had never seen them perform before, and the pass Saturday I had the opportunity to stand in the crowd for two hours while they took The Fillmore Miami Beach at The Jackie Gleason Theater by storm. And it was a hell of a night.

Touring North America as part of their trek named “A Pale Horse Named Death” GHOST is offering their fans two hours plus, 25-songs long show, with a brief intermission between acts, funnily dubbed as “an opportunity to expel or replenish any liquids”. When the curtains raised, and amongst the thunderous clamoring ascending from every corner of the packed theater, we could glance at the stage for the first time, set up with a tall cathedral-like backdrop depicting demonic cherubs and featuring a Papa Emeritus-like figure in the center mimicking a gigantic stained glass and several stairs almost the width of the stage, leading to platforms for the drummer and keyboardists. Slowly The Nameless Ghouls – donning their satanic horned masks and all black attire – appeared and scattered across the raised stage, and the powerful, chugging riff of “Ashes” filled the ears of the worshippers as the “new” frontman Cardinal Copia took the stage. 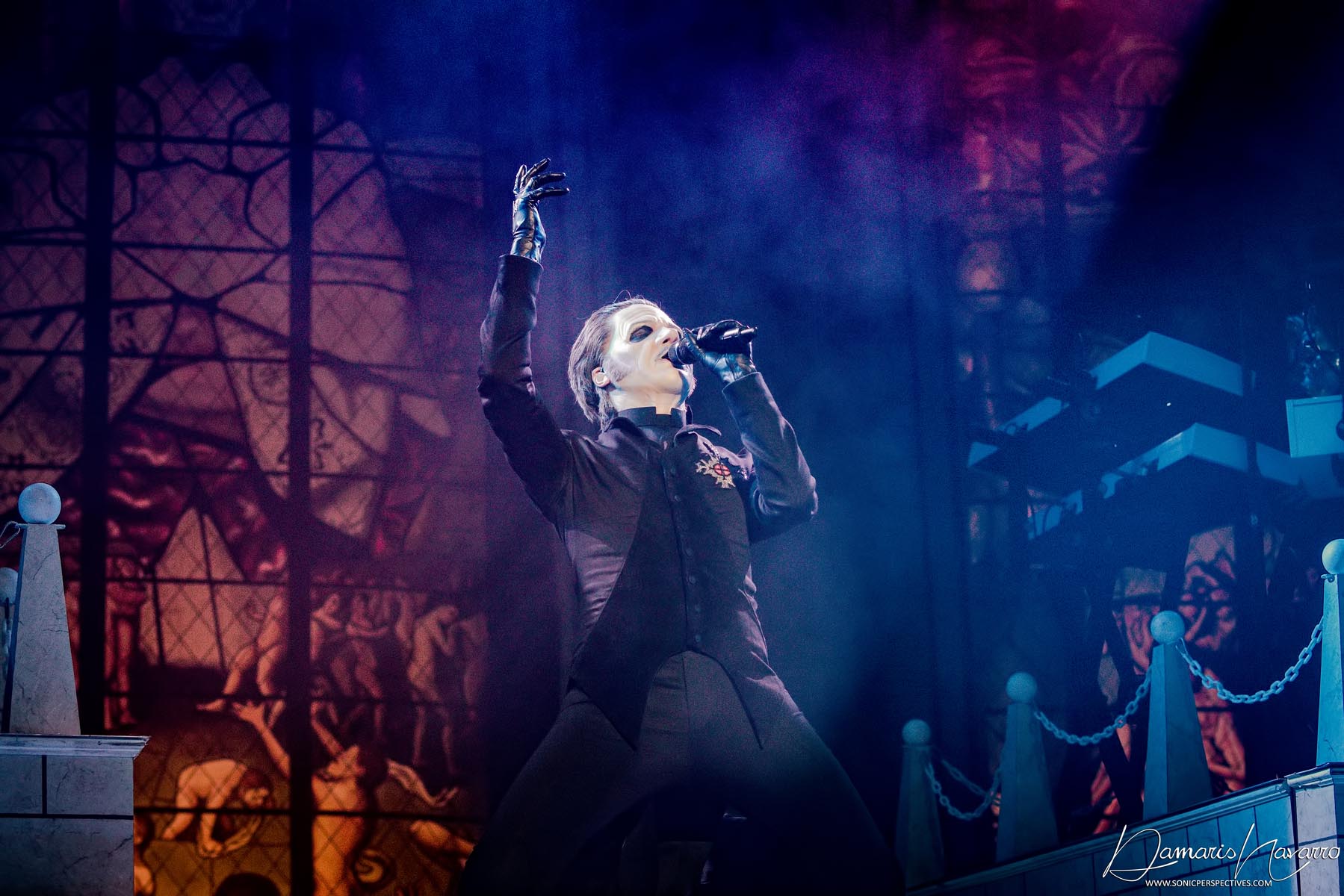 The first act included several highlight moments, and maybe using that word is not the best way to illustrate it: obviously the new single “Rats” made presence as the second song, as did hits like “Absolution” and “Ritual,” while the Cardinal commanded the stage, disappearing backstage and re-appearing costumed in his full Cardinal dressings, swinging a censer sending clouds of fragrant incense floating through the crowd. Lighting was excellent and well placed to tell the show’s story, bathing the audience and enhancing Luciferian aesthetics. During “Miasma” a new character came on-stage:  Papa NiHill – the first band member besides Forge to receive a character name, and believed to be the ancestor of all previous Papa Emeritus characters -, he appeared escorted by two nuns in full outfits, sat of the top of the stage, grabbed a saxophone and threw a sick solo, thus sending the audience’s frenzy to the stratosphere.

The second half of the show included some of their strongest, hardest songs, “Spirit,” “From the Pinnacle to the Pit,” and the aforementioned and explicitly malevolent “Year Zero,” each song performed in a true firing-on-all-cylinders vein, the band filling the airwaves with their unique brand of satanic pop-metal and with Cardinal Copia now in full gear: a red cassock and biretta. “He Is” and “Mummy Dust” followed, the Cardinal introducing the latter as “a heavier song, one that will make your ass move”. During the song, one of the Ghoulette‘s keyboardists sat on the stairs and jammed on a portable synth, and as the song neared completion, two side cannons shot confetti into the air and over the riled up audience. A GHOST re-branded rendition of Roky Erickson’s “If You Have Ghosts” came next, and turned into an almost 20-minutes long jam spiced with humor, as Copia moved across the stage and facetiously introduced each member of the band simply as Ghoul or Ghoulette. Pressing the gas pedal even harder they launched into “Dance Macabre,” the second single from Prequelle and ended with “Square Hammer,” from Popestar, the EP that followed Meliora. 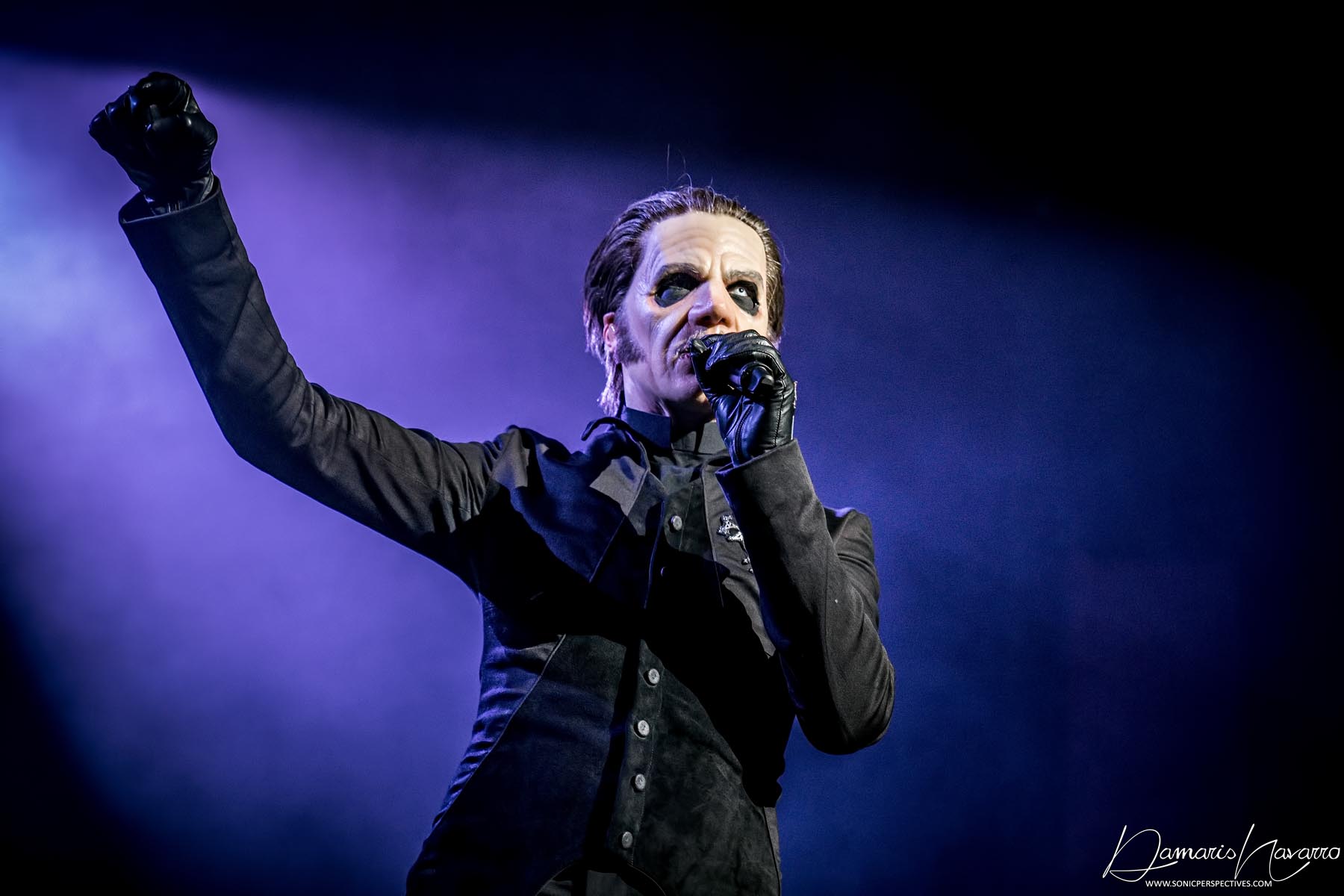 GHOST departed the stage after the wicked double-punch, but Cardinal Copia returned shortly after, engaging the crowd and asking if, they wanted to go home. After a predictable and categorical “NO!,” he promised one more song, as long as the crowd made it count. The Nameless Ghouls once again came to light, and GHOST ended the evening’s dominion with “Monstrance Clock,” sending off a raptured congregation of disciples down to their most frenetic and devilish trances, leaving them rocked and bathed in darkness.

As I previously said, for some in the metal community – and even outside of it – GHOST is hackneyed and gimmick. Moreover, that contemptuous (if not outright hateful attitude) makes they miss what is most important: GHOST is enormously pleasurable, and who doesn’t like pleasure? They have made metal popular and metal definitely needs that. An exceedingly entertaining show from both audio and visual perspective, make sure to catch them during this tour and be ready to survive a musical ritual while conjuring your own demons from the depth of Hades.