Fusing elements of punk rock and heavy metal, sporting angst-filled and introspective lyrics (often addressing themes such as social alienation, self-doubt, abuse, neglect, betrayal, social and emotional isolation, psychological trauma and a desire for freedom), and known for straightforward and high-energy performances, Alternative Rock took the music world by storm at the end of the 80’s and beginning of the 90’s, boosted by the undeniable success of albums like Nirvana‘s Nevermind, Pearl Jam‘s Ten, Soundgarden‘s Badmotorfinger, Alice in Chains‘ Dirt and Stone Temple Pilots‘ Core to name a few. Despite the genre – and the subculture associated with – it declined in prominence by mid-to-late 1990s (with many acts disappearing into oblivion and some other losing their core members to drugs and suicide), some acts took the roots of that grunge movement and transformed it into an accessible, often uplifting and definitely more mainstream sound, one that has remained relevant and commercially successful until today. And luckily for us living in one of the Southernmost cities of the US, two of the top exponents of what alternative rock is today visited a packed Bayfront Park Amphitheater on a very hot and humid night last Saturday.

Embarked in a North American tour to celebrate the 25th anniversary of both their seminal albums Throwing Copper and Sixteen Stone, BUSH and LIVE have joined forces for The ALT-IMATE Tour, a high-powered co-headline summer run that is bringing all those songs that still resonate so profoundly with people to the live setting. It seems unreal to contemplate that nearly 25 years ago BUSH and LIVE released their first albums and played their first-ever shows. Little did we know then they would survive the pitfalls of the music industry and ultimately become two iconic rock bands. Nonetheless, there are two immediate questions to be answered after two decades and a half: Are the bands still good? And have the voices of the front-men and their stage personas held up over time?

One thing was clear before the first note hit the airwaves: both bands are still capable of drawing sizeable crowds to attend their performances. While the music scene in South Florida has changed, the demand for rock concerts hasn’t, and fans packed the venue, eager to take a trip down memory lane and hoping to witness something truly special. And they left with a smile of satisfaction painted on their faces. 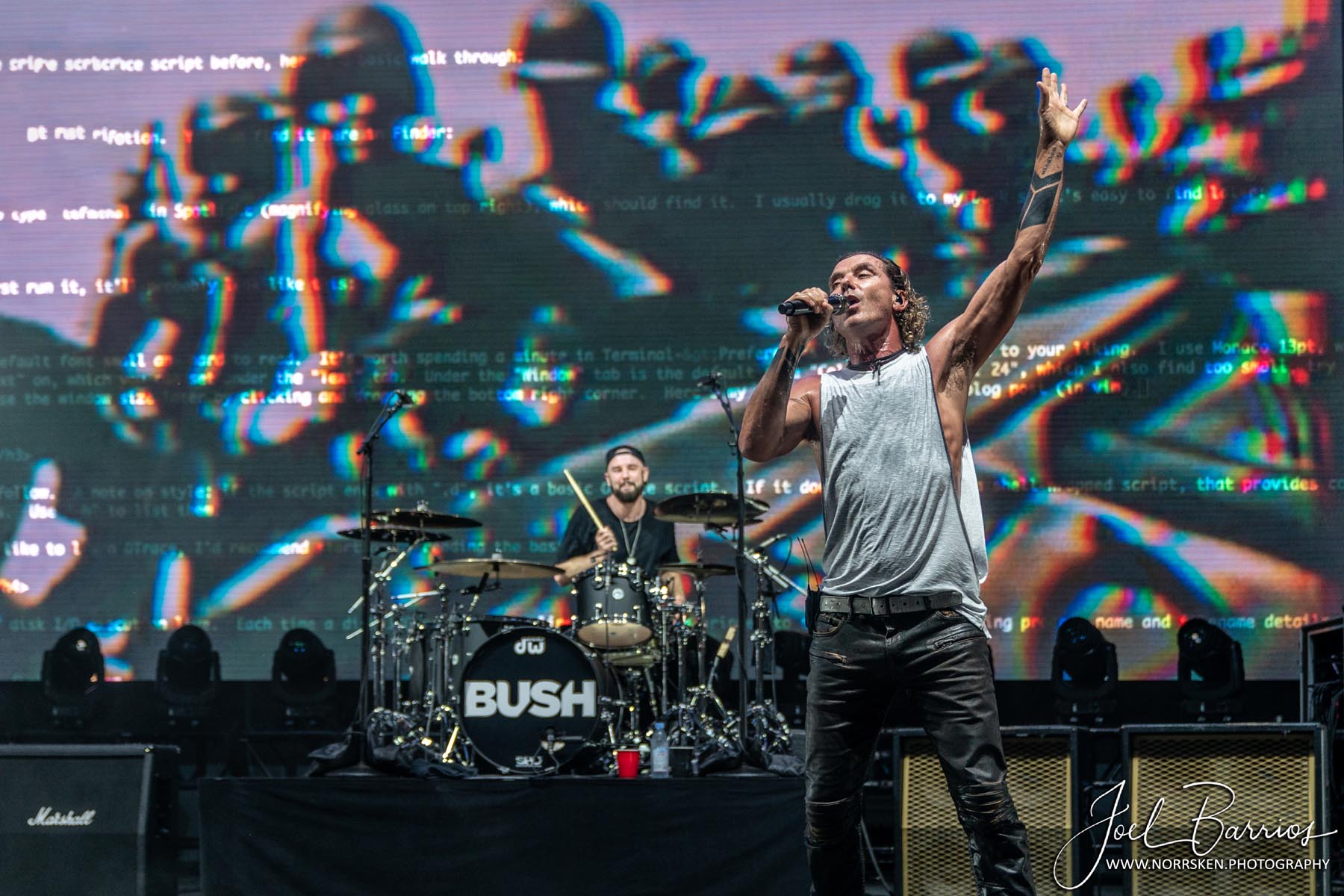 Things kicked off with well-traveled and often undervalued Toronto based Our Lady Peace who has been in the rock scene nearly as long as both the headliners, and earned the respect of rock fans both stateside and around the globe. Led by lead vocalist Raine Maida, Our Lady Peace performed in front of their most loyal fans who came early to catch their somewhat short six-song set.

While this was billed as being a co-headlined concert by two of the most recognized names in alternative rock, BUSH and LIVE have been sharing the headlining spot on this tour and on this night, LIVE was to be the headliner. Although Gavin Rossdale and company will not close the night, they certainly didn’t act like it. With what can only be described as an impressive high-energy set, BUSH delivered what every one of their fans came for; a balls-to-the-wall rock show. Led by front-man Rossdale, along with Chris Traynor on lead guitar, Corey Britz on bass and touring drummer Nik Hughes the band pressed the liveliness pedal since the very beginning, engaging their followers immediately by opening with the 1994 hit “Machinehead.” Rossdale sang in his distinctive strong voice – that couldn’t have sounded better – with Nik Hughes pounding the drums like if wanted to break them. It didn’t take long before the audience saw Rossdale’s swagger that included jumping off the drum riser and bouncing around the stage like he first did 25 years ago. Amidst bright and swiftly changing stage lights and a giant LED backdrop projecting videos and fast pacing images, the band’s sound was absolutely spot-on and as fresh as ever. BUSH didn’t waste a second of their stage time, and torn through hits like “This Is War,” “Swallowed,” “Body,” “The Disease of the Dancing Cats,” “Bullet Holes,” (from the “John Wick: Chapter 3” soundtrack) and “Little Things.” A personal highlight of the night came early in the set when Rossdale left the stage and joined the crowd as he sang “Everything Zen.” He engaged his fans on a one-on-one personal meet and greet experience, running through nearly all areas of the amphitheater while his band-mates held the forth on stage with unrelenting dynamism, and impressively enough he did this without skipping a beat. It was wondrous to witness how important is for the band to connect directly with their fans, a love that was clearly and abundantly reciprocated. Another superb moment happened when Rossdale sang a solo version of “Glycerine” along with his electric guitar, and joined by thousands of voices in unison, while the crowd clutched their cell phones to one of the bands most popular songs. BUSH closed out their set with the top radio hit “Comedown” off their most popular album 1994’s “Sixteen Stone,” and a thunderous ovation greeted them as they vanished backstage. 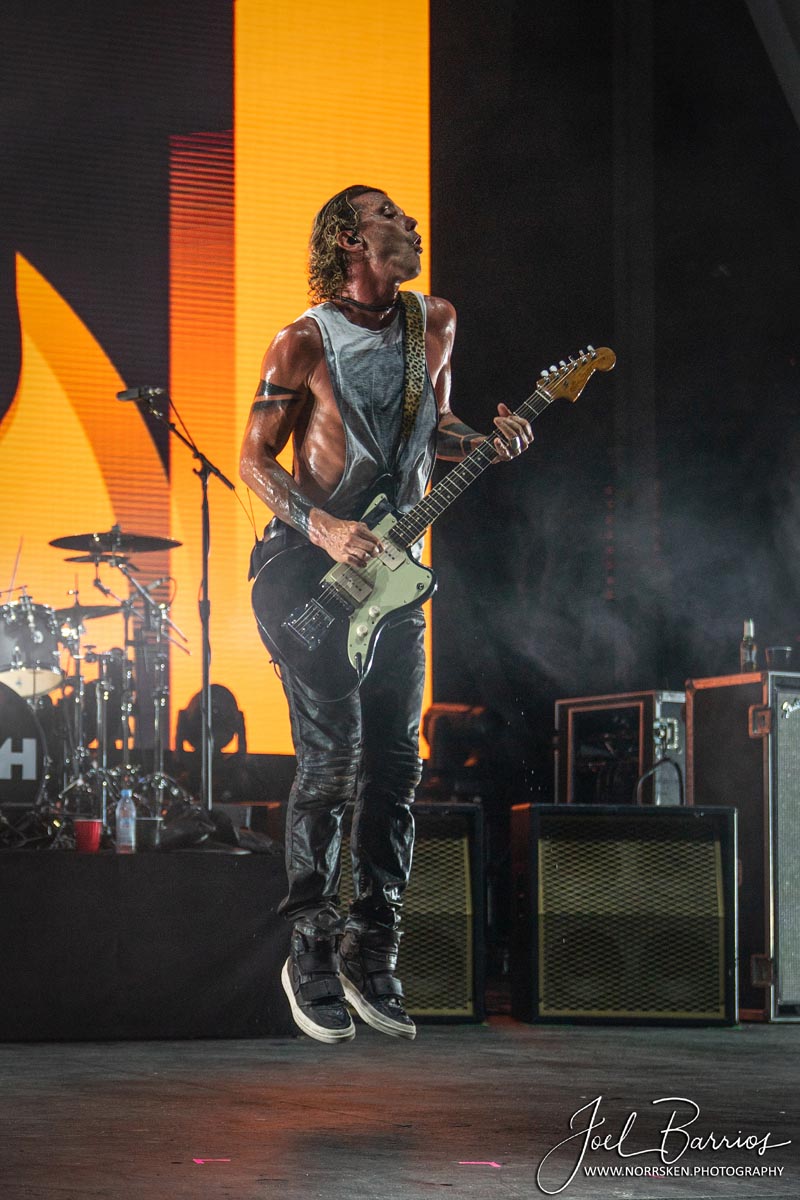 Definitely BUSH had upped the ante for LIVE to follow, yet they rose to the occasion. LIVE’s all-original lineup including returning lead singer Ed Kowalczyk, guitarist Chad Taylor, bassist Patrick Dahlheimer and Chad Gracey on drums took the stage, accompanied by touring members Zak Loy (rhythm guitar, mandolin, backing vocals) and Clint Simmons on percussion. These guys been touring consistently delivering a steady stream of memorable presentations and they seems to age as good as wine does. Their most recent South Florida appearance was in late 2018 at the Riptide Music Festival in Fort Lauderdale and thousands of fans have been eager to see the band perform again locally. 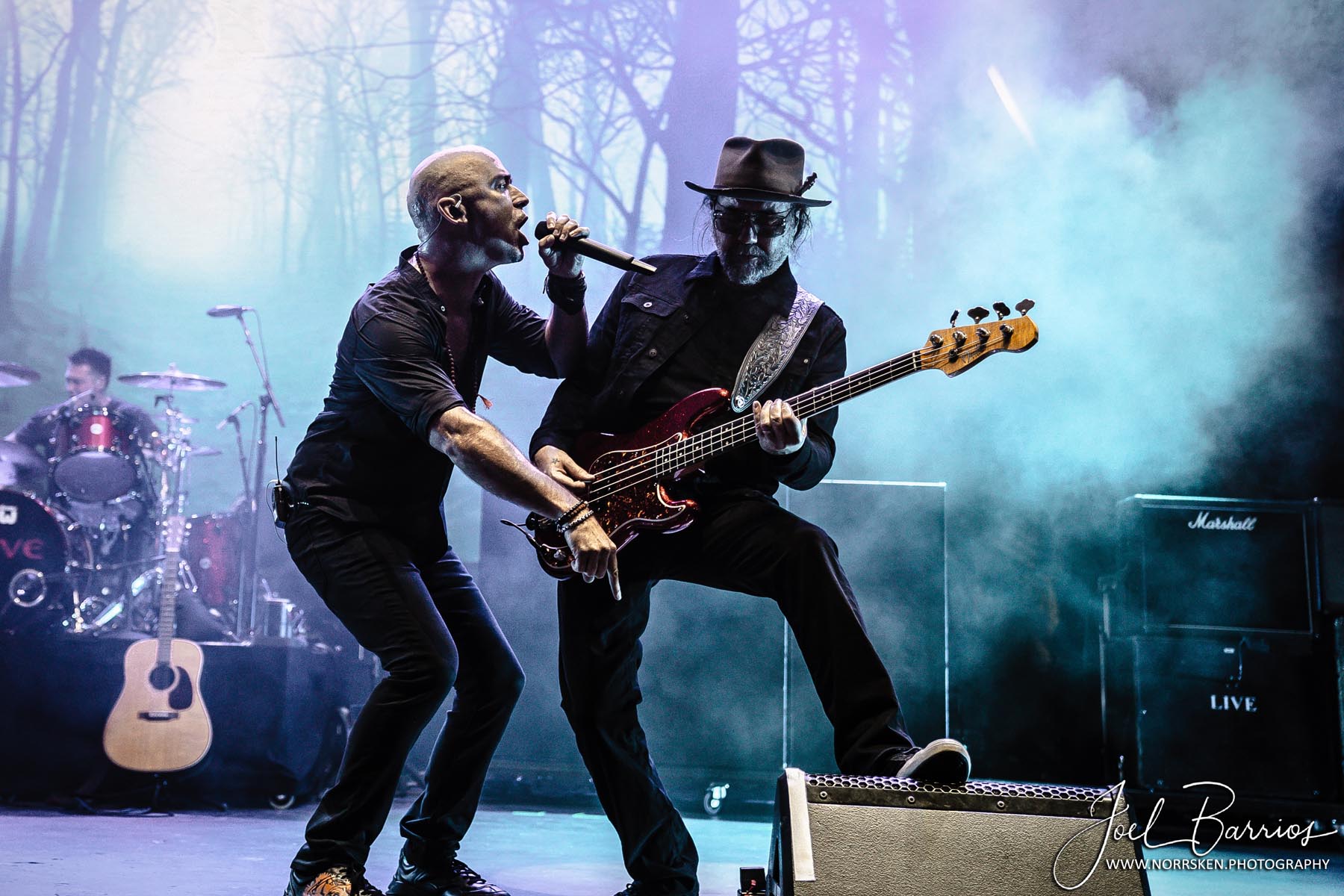 Kicking things off with “The Dam at Otter Creek,” they led into a 13-song, 75-minute set, that included nearly every hit song from arguably the bands most successful album, 1994’s Throwing Copper. The initial minutes saw Kowalczyk singing from the seats for another up close experience with the crowd, to later climb on stage and pound some tambourines while the fans sang along. “All Over You,” “The Dolphin’s Cry” and “I, Alone” are still as liberating and poignant as they ever were, and the band demonstrated its cathartic musical malleability by throwing a couple of unexpected yet delicious renditions of REM “Losing My Religion” and Rolling Stones “Paint It Black”. More anthems in the form of “All Over You,” “Selling the Drama,” “Shit Towne,” and “White, Discussion” made presence and solidified the impending sensation of traveling through time, with the charismatic Kowalczyk grinning and strumming his acoustic guitar, flanked by the unwavering melodies coming off Dahlheimer and Taylor’s guitars. The electricity in the crowd was unmistakable. 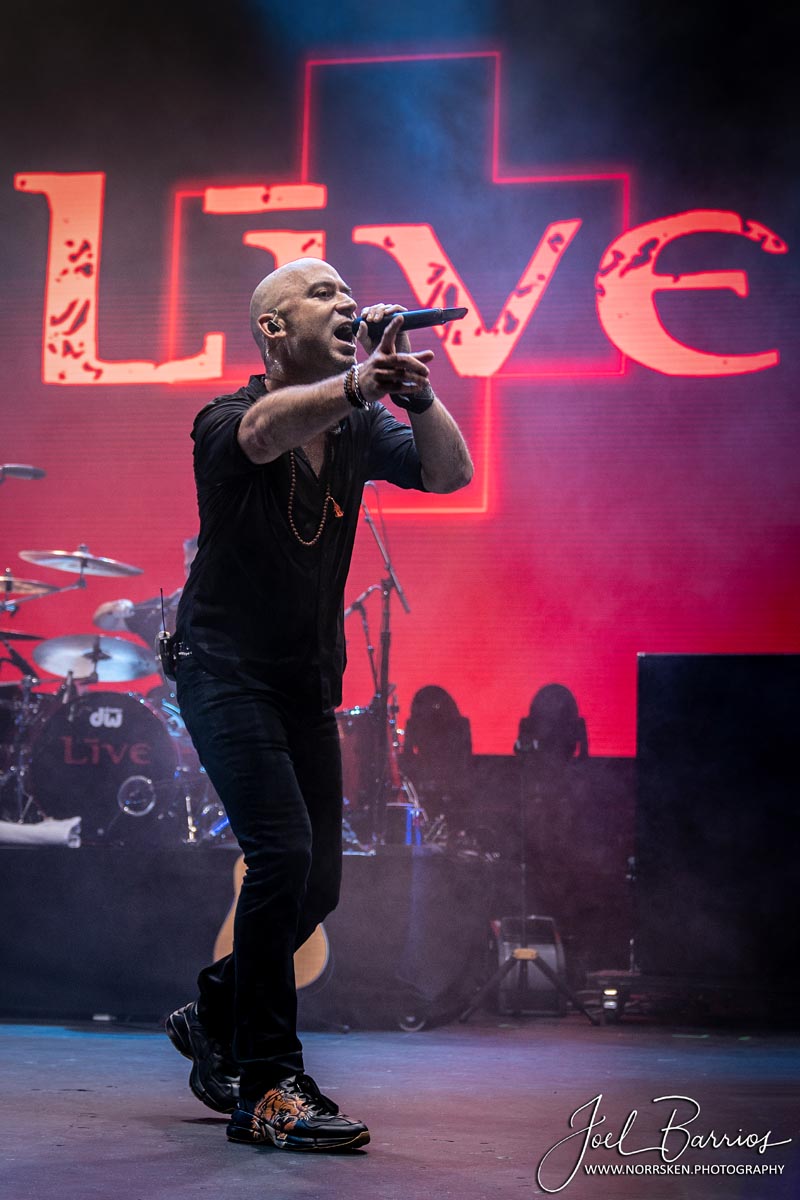 The night closed with acoustic versions of “Heaven” and “Turn My Head” both of which Kowalczyk played on an electric guitar after two attempts to play them on non-working acoustic guitars. Even though the songs sounded emotional, the decision of including them at the end of the set somehow tamed the pulsating urgency of the band’s delivery up to that point. Minutes before Bayfront Park’s 11 PM curfew LIVE closed with a stripped down and brooding version of “Lightning Crashes,”  fully demonstrating that the timeless hymns that pushed them to the stardom remain influential and unforgettable, ready for the future generations to enjoy.

Machinehead / This Is War / Everything Zen / Swallowed / Body / The Disease of the Dancing Cats / Bullet Holes / Little Things / Glycerine (Gavin, solo with electric guitar) / Comedown / Outro (The Sound of Winter)