Beginning on September 22nd, stages across North America have been blessed by the dynamic performances of co-headlining American rock bands Alter Bridge and Skillet, supported by the up-and-coming Dirty Honey. The aptly named Victorious Sky Tour promised to bring fans an experience embodying the energy that both bands have carried to audiences for more than a decade, building their award-winning discographies to a steadily growing fanbase. To have a tour with two headlining acts that are comparable in not just sound, but in skill and enthusiasm, was a spectacular treat for fans of any single group on the bill. On October 25th in Orlando Florida, the three bands performed to an enthusiastic crowd packed shoulder-to-shoulder in the last of two consecutive nights at the House of Blues, an evening which also served as the tour closing date. 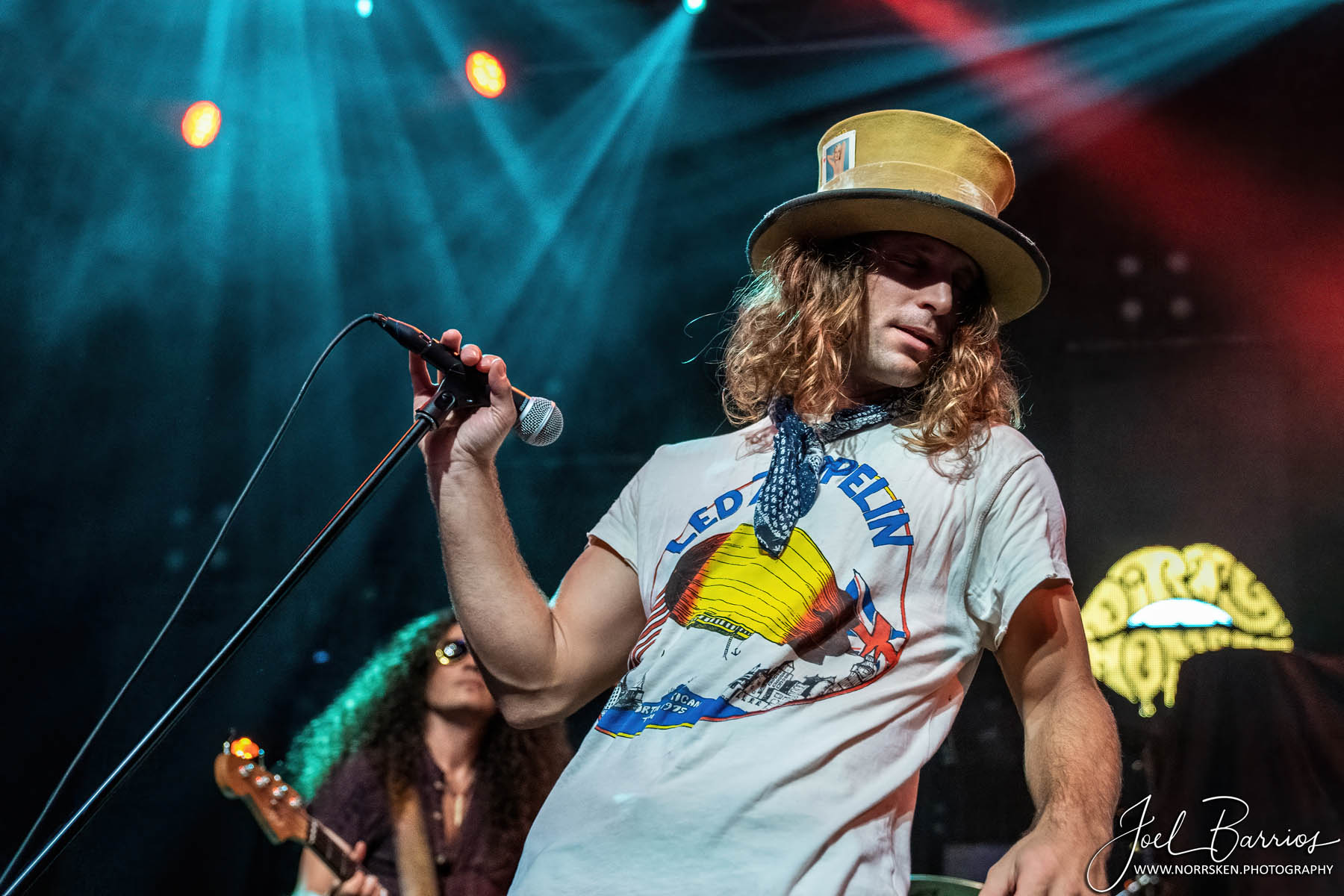 First on stage was Dirty Honey, who had served as the supporting act for a majority of shows on the tour. The California-based rock group draws heavily on influences from classic rock, sporting their own anthemic vibe paired with exceptional musicianship. As such, they appealed to the audience with a less aggressive touch than the heavy thunder of the headliners, with singer Marc Labelle harnessing genuine 70s goodness as he crooned into the mic with sultry tenderness. Even as they played some of the heavier works of their discography, including “Break You,” it seemed that Dirty Honey was bent on seducing the crowd rather than knocking them off their feet with force alone. A special moment came when Labelle spoke to the audience to reveals that his parents were in attendance that night, statement followed by a massive cheering. I must confess I was not very familiar with them, and their take on modern classic rock mixed with a blues/folk type melodies made me include them in the list of bands I certainly want to see again. “Rolling 7’s” and “When I’m Gone” garnered a very enthusiastic response from the crowd, with Labelle – donning a hat, a bandana and a Led Zeppelin tee – expertly moving around and engaging with the audience while easily hitting high notes that would make Robert Plant proud. His comrades John Notto (guitar,) Justin Smolian (bass,) and Corey Coverstone (drums) contributed with surgical precision to the riveting sonic experience, delivering one of the most kickass opening sets I’ve seen in a very long time. Dirty Honey are NOT another run of the mill hard rock revival band, and they are NOT in a futile mission to save rock n’ roll. They simply kick ass and they are a band to follow closely: these kids are destined to the big leagues. 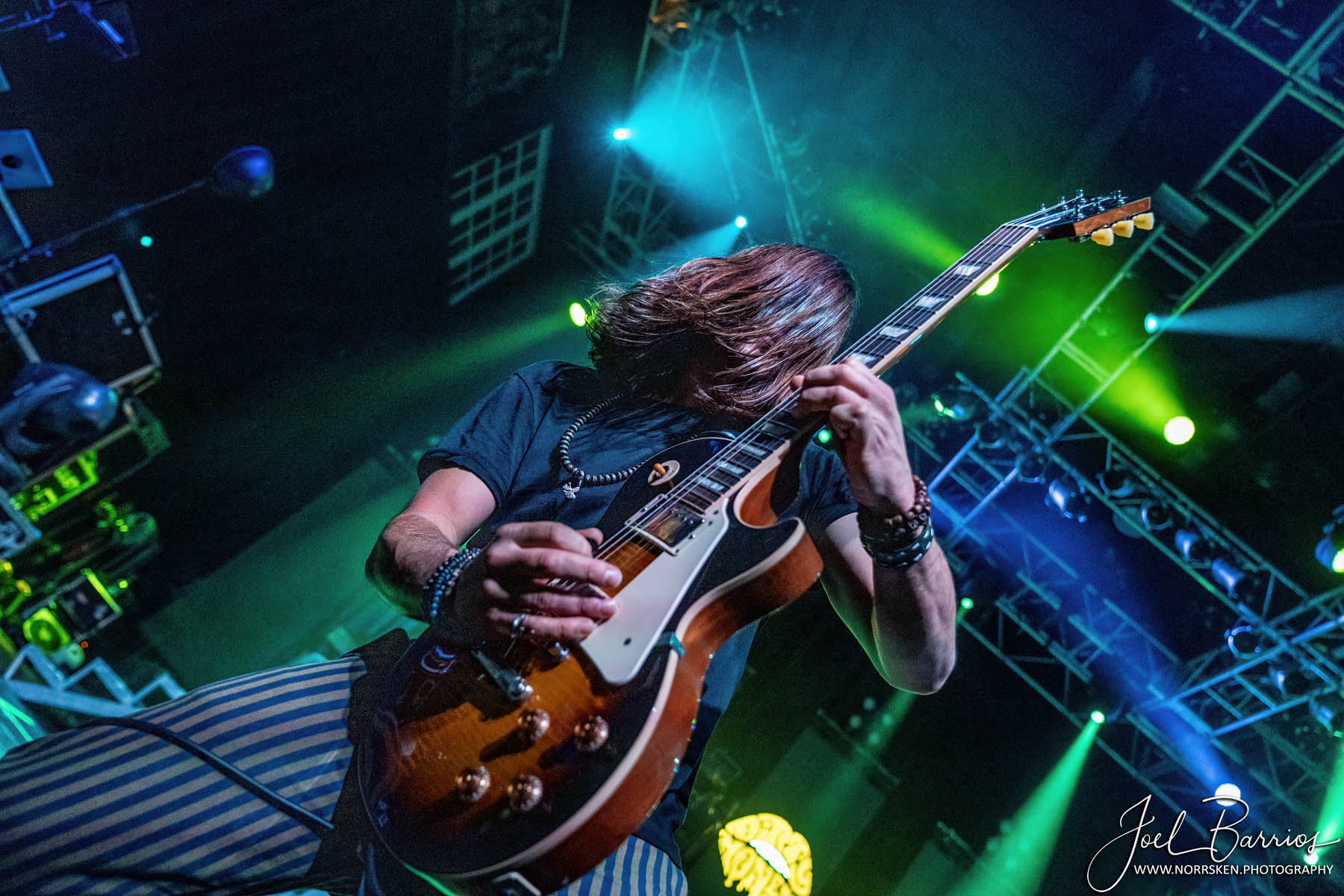 John Notto tearing up a solo during the Dirty Honey set

When Skillet walked on to a cacophony of deafening cheers and their set roared to a start, it was easy to forget that there was yet another act left in the night. Between the raw energy and sheer skill at enthusing the crowd, the intensity that was returned by an earnest audience was more than well-deserved. A commanding on-stage presence derived from Skillet’s enduring time in the spotlight highlighted a band capable of giving their all to a sea of onlookers. 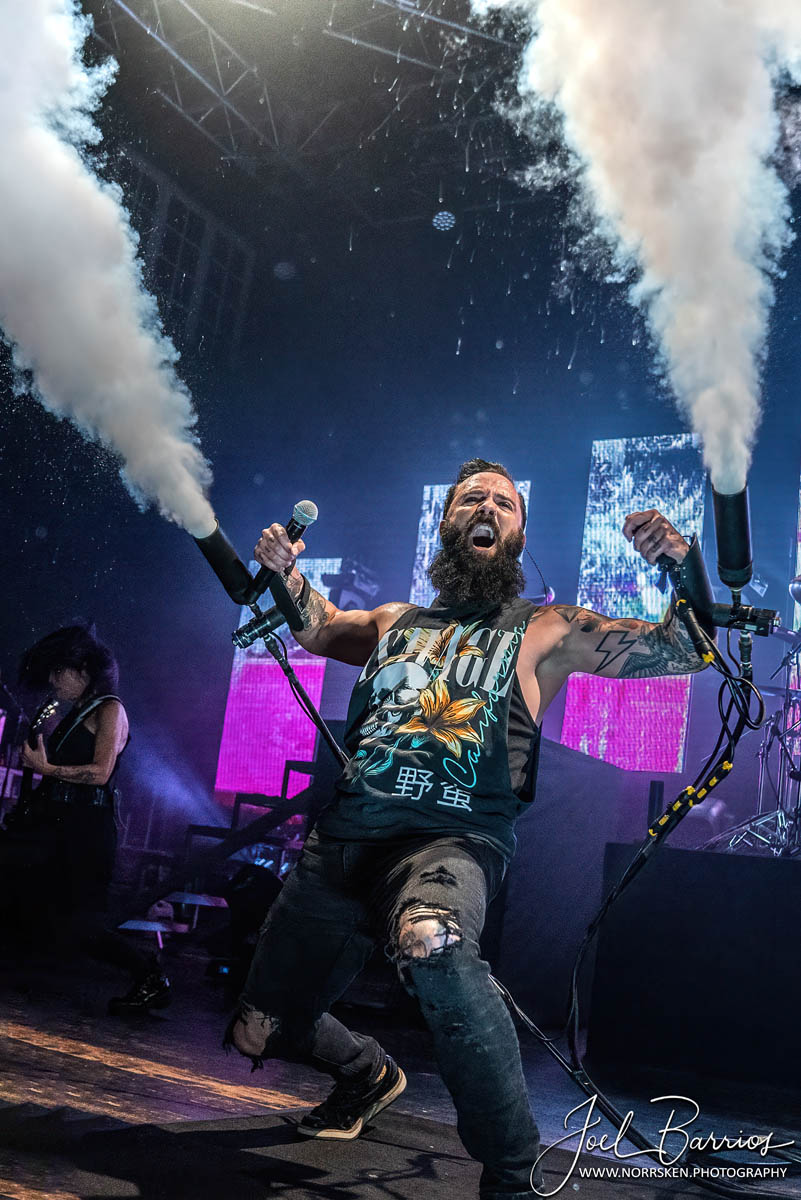 John Cooper firing smoke and CO2 towards the front rows

I rack up tons of live shows a year, but Skillet’s performance was one for the books. Packing an electricity that is impossible to describe with words, and pairing blistering musicianship with smoke cannons and a seizure-inducing light show, it was almost impossible to tear one’s eyes away from John Cooper and his bandmates.  Korey Cooper seemed like possessed by an evil spirit, pouncing around with her guitar in a complete state of infectious frenzy, while Jen Ledger bashed the life out of her drum-kit, effortlessly singing her vocal lines. Seth Morrison ripped through his guitars parts with an unassuming yet cohesive deportment, driving the riled-up crowd to insanity levels. The dancing lights and columns of CO2 served as accents to an spectacle that relied on the band’s charisma and abilities, making the night not only a musical performance, but also a slamming stage show of the highest degree. It truly felt like a tornado, a ravaging assault on your sensory receptors. 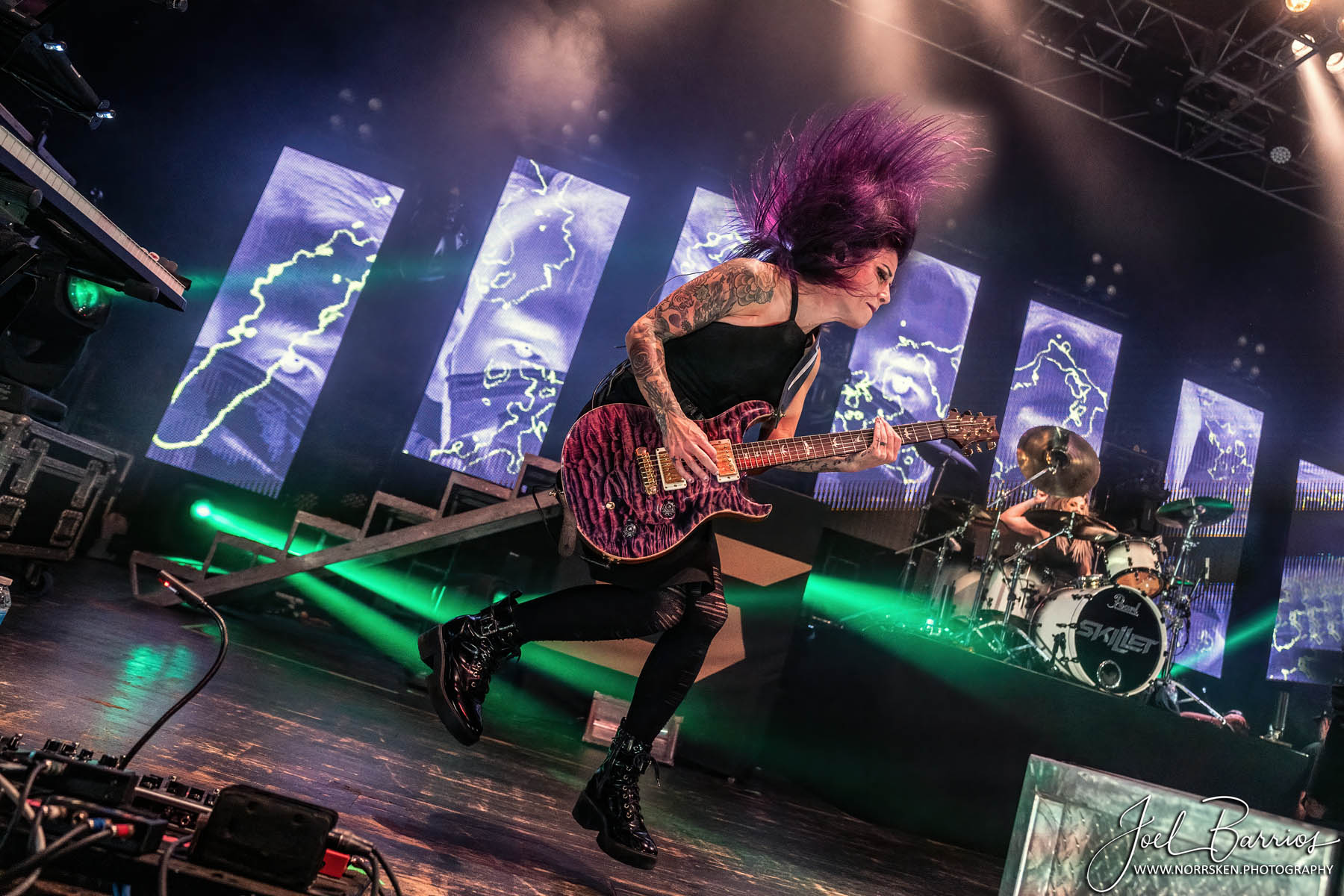 Korey Cooper floating over the stage

The set-list balanced well between both their latest albums and their earlier work, including tracks from Grammy-nominated “Comatose” alongside their summer single “Legendary.” By the time their set concluded, there was a combination of exhaustion and excitement mingling in the air, perhaps with a touch of disbelief that there was yet another headlining performance to follow. 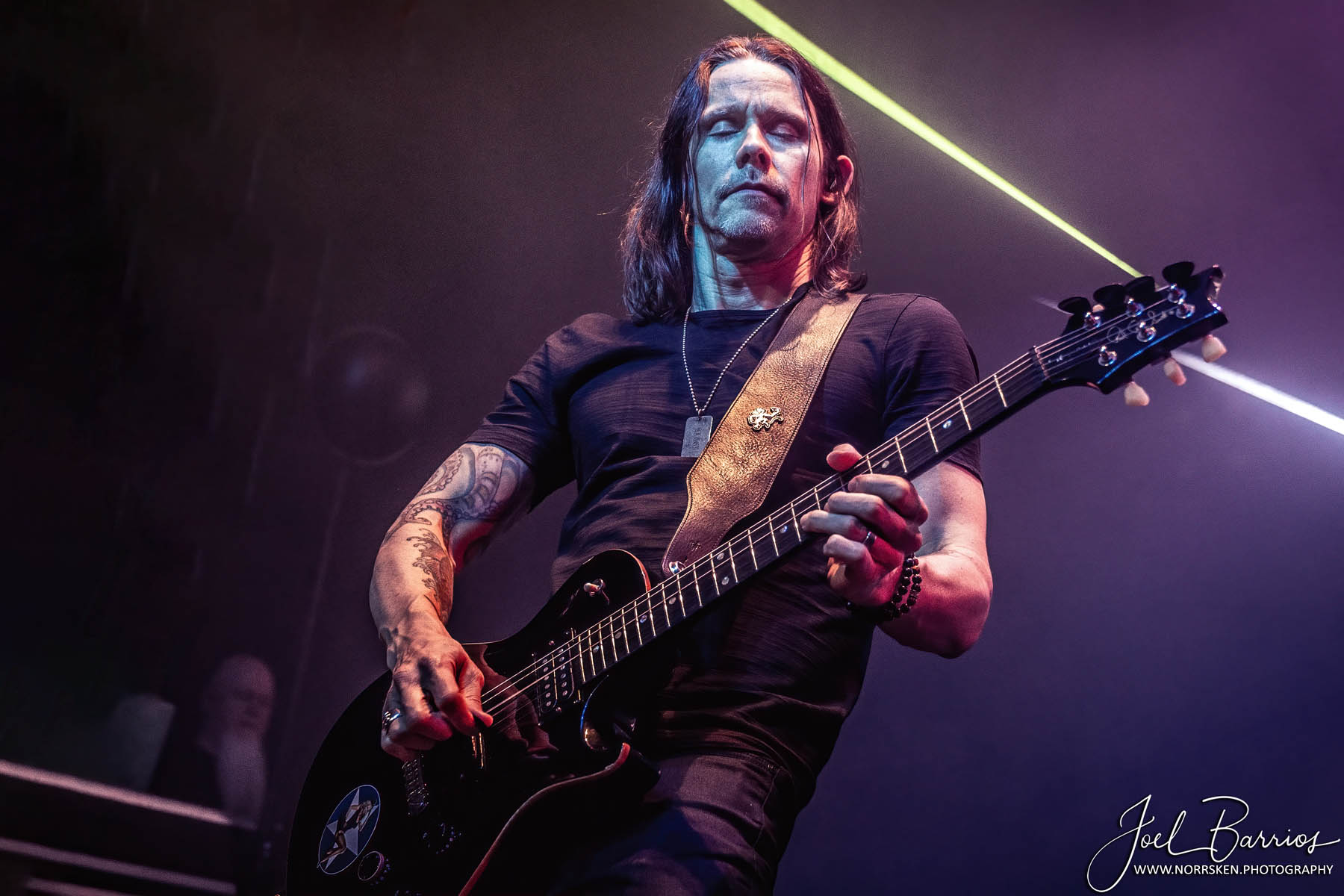 Myles Kennedy, one of the finest voices in metal nowadays

Hailing from Orlando themselves, Alter Bridge had the hometown advantage for this last show, and were rightfully met with the same love as a home team returning victorious, (noteworthy to add the show was sold out, despite being the second of two identical nights at the same venue). There was no question that from the first moment the lights shone onto them, that the four guys on stage were entirely committed to delivering a high-quality spectacle to the flocks of fans that had gathered before them. This noticeable degree of comfort among even throughout a zealous musical delivery made their headlining set both invigorating and truly enjoyable to watch. Even during the gentle intro to “Blackbird,” there was no slowing the steady roll of cheering and applause that never seemed to die during their set, reaction that rose to deafening levels with the live debut of “Dying Light”. 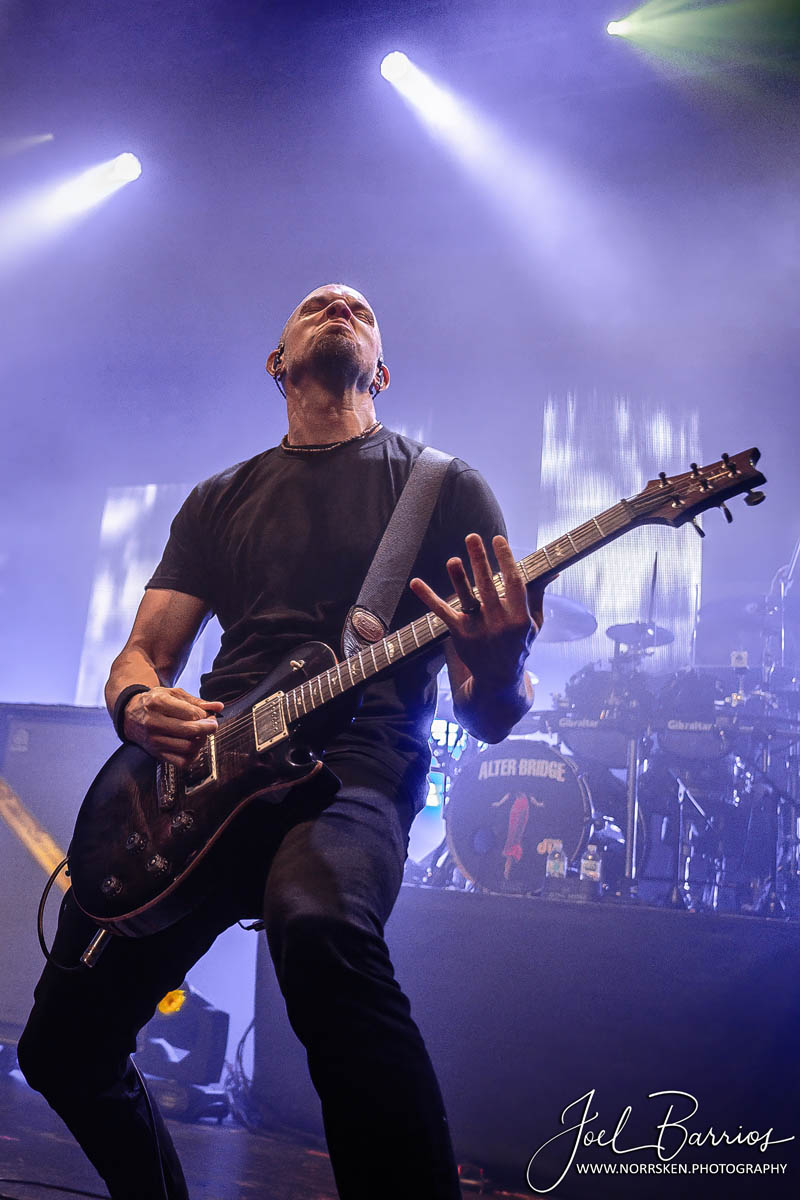 Balancing both vocals and instrumentals, there was no apparent strain as Alter Bridge owned their space with utter confidence throughout, displaying a concise and enthralling delivery, one that is so surrounding that completely engulf you with rhythm and melodies that spark your most primal senses. To enrich the night even further was an acoustic performance from guitarists Myles Kennedy and Mark Tremonti, showing their technical capabilities as they transitioned gracefully to the gentle notes of “In Loving Memory.” The loudest cheers of the night, however, came to accompany the astounding live rendition of hit song “Metalingus,” a final reminder of the accomplishments that gave Alter Bridge the well-deserved top spot on the bill. The night closer “Rise Today” brought back to Earth an audience that had been levitating in a journey of musical and lyrical grandeur for over 3 hours, with cheers still echoing when Alter Bridge gave their final bows.

While vibrant lights and capable live mixing made the performance palatable in pure aesthetics, it was the skills of those performing on stage that made the night one with performances worth remembering. Both Skillet and Alter Bridge complemented one another’s styles effortlessly – with Dirty Honey being a terrific choice for opening act -making for an electric brand of joy that was effortless for the audience to reciprocate, a result of efforts from some truly incredible musicians. While there’s no telling when a bill so perfectly matched will come up again, it was a joy to experience this rare case of stars aligning.